Rapidly rising Seattle roots rock band Cody Beebe and the Crooks played their first hometown show in nearly two months, headlining the Crocodile on Saturday April 23rd. The show celebrated the end of an extensive Western/Southwestern US tour – while dropping hints of big things for the future. If the Crocodile wasn’t sold out it sure looked that way; the main floor was packed solid with enthusiastic fans.  Cody and the Crooks had a hand in picking the openers for the night. This led to some great collaborations with Austin Jenckes, Daniel Kamas and River Giant.

Though billed as Austin Jenckes and the First Call, Jenckes took the stage solo. His smooth voice and expansive vocal range captured the crowd’s attention. His original songs were great but what really caught my ear was the diversity of the songs he covered. Early in the set he led the crowd in a sing along of John Denver’s “Take Me Home, Country Roads.” Somewhere in the middle of the set he broke out just the chorus of the 4 Non Blondes’ “What’s Up?” He encouraged the guys in the audience to unleash their higher vocal register to attempt to sing the same pitch as Linda Perry. Towards the end of the set he unleashed his heavy, acoustic cover of the Smashing Pumpkins’ “Disarm.”

The second act was L.A.-based singer-songwriter Daniel Kamas. Formerly a Seattle resident and UW student, Kamas received a warm welcome from friends and fans throughout the venue. Cody Beebe and Crooks drummer Chris Green joined him on stage for a song.  He played a mix of old and new material, mixing many musical styles into his own pop-folk sound.

River Giant was the most musically diverse opener of the night. Their sound can be described as Band of Horses meets the Moody Blues. They fluctuate between melodic indie-folk and psychedelic blues, traversing the space in between. Their live set was a little rough but enjoyable. “Little Hands” was the highlight of the set for me. It’s a slightly psychedelic slow burner with great vocal melodies throughout the chorus. 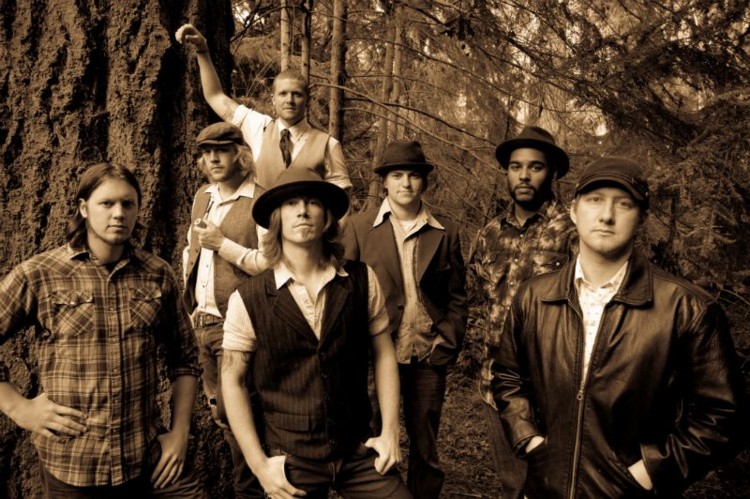 Cody Beebe and the Crooks – photo courtesy of codybeebeandthecrooks.com

Cody Beebe and the Crooks took the stage to a packed Crocodile ready to rock the house. They kick-started the set and gave the crowd a shot of musical adrenaline with the rave-up “Hurricane.” The melody of the radio-ready “Waiting On You” and the galloping rhythm of “The Aftermath” were highlights. A passionate, extended jam of the Pink Floyd influenced “War” showcased the musical talents of the band, especially those of guitarist Greg Floyd and keyboardist Aaron Myers.

Instead of playing set staple, the recession anthem “Nine to Chain,” Cody Beebe and the Crooks premiered the music video for the song. The video, depicting realistic scenes of recession struggles, was extremely professional, polished and moving. I honestly didn’t know what to expect but the band and production company, Fueled Creative, knocked it out of the park. The band expects to officially release the video later this spring or summer.

A touching point in the set came when multi-instrumentalist Tyler Paxton introduced his cousin and had him take the stage. His cousin enlisted in the Air Force and is scheduled to shortly ship out for basic training. He is an aspiring harmonica player. He joined the band on “Change of Pace” and nailed it. He stopped on a dime with the band at the end of the song.

The couple of new songs they performed were very strong with new layers and textures. The new songs prove that Cody Beebe and the Crooks isn’t a band content to churn out the same stuff over and over like an assembly line.

They brought Daniel Kamas onstage to perform a full band version of his tune “Wrecking Ball,” heard back in the day on 103.7 The Mountain. They closed the show with an extended jam version of Jimi Hendrix’s “Voodoo Chile (Slight Return)” showcasing Floyd’s guitar work and Beebe’s strong vocals. They returned for an encore to close out the night and left the audience cheering and wanting more.

After some well-deserved and much needed R&R, Cody Beebe and the Crooks play the Showbox with Eclectic Approach and others on June 10th. Then they set their sights on a summer tour that will crisscross the United States.