Artist: Luke Evans
Album: A Song For You
Details:  Welsh actor/singer-songwriter and the generally amazing Luke Evans just released his second album, A Song For You, including covers of “Over the Rainbow,” “Last Christmas” and “My Way.” There’s also a duet with actress/singer Nicole Kidman on “Say Something.” I believe this is the first song Kidman’s done independent of a film since 2001’s “Somethin’ Stupid,” a duet with Robbie Williams. The cover is a smoking hot photograph by Ed Cooke of Evans.

Artist: Fancey
Album: Star Dreams
Details: The New Pornographers’ guitarist Todd Fancey has a solo project! Did you know? Star Dreams is the fifth album from Fancey, which got some great artwork from Antoine Diligent, who thought up an intergalactic blue flower with a rainbow and stars streaming out of it. Beautiful.

Artist: Meditations on Crime
Album: “Heloise” (single)
Details: Meditations on Crime, Julia Holter & Harper Simon, have released a single called “Heloise.” Artwork for the single comes courtesy of photographer Jessica Craig-Martin, whose work is often “cropped and obliquely angled photographs (which) rarely allow for the identification of her subjects’ faces.”

Artist: Kishi Bashi
Album: 151a (Reissue)
Details: Kishi Bashi reissued his first album, 151a, to commemorate its 10th anniversary. Hsiao-Ron Cheng contributed the artwork for the cover of a cute little child and a cute huge tiger. Cheng, who is originally from Taiwan, is a painter, illustrator and digital artist. Happy Year of the Tiger!

Artist: Lev Snowe
Single: “Someday Soon”
Details: Canadian singer-songwriter Lev Snowe has an adorable cat photo for the cover of single “Someday Soon.” I can’t blame him. That’s just a perfect cat expression. This track came out a couple of years ago, but I believe Snowe is working on new tracks.

Artist: Jaded Star
Album: Realign
Details: Jaded Star, a heavy metal quarter originating in Greece, selected artist Jon Toussas for their album Realign. Toussas is a fellow Greek who has designed other Jaded Star’s covers, including Realign‘s first single, “Breathing Fire. ” I like the shards of whatever this robot? statue? is made of compared to the smooth lines of the figure. And that planet crashing into? combining with? the figure is just too weird.

Artist: Inglorious
Details: We Will Ride, the latest album from Inglorious, has a dramatic cover. It’s blues, whites, grays and black – until the red of the woman’s hair. She is heading to battle on a giant horse. Or has she won a battle?

Artist: Poorstacy
Details: Poorstacy’s cover for “Love Spells” fits right in with Halloween.  The track itself was written and produced by Blink-182’s Travis Barker, who had a great Halloween at Knott’s Scary Farm in 2018.

Artist: Body Double
Details: Noah Adams from Body Double took this adorable photo of two strange and kind of spooky toys for the band’s debut LP, Milk Fed. Where did he find these baby creatures? Milk Fed is out now.

Artist: CXLOE
Details: Ash Lim is the photographer behind CXLOE’s “One and Lonely” cover art work. Lim’s photo adds some pretty cool words and symbols on CXLOE’s bare skin. CXLOE, an Australian artist, described in the press release for the track: “‘One and Lonely’ is all about loneliness. I spend a majority of the year away from my partner, and it always weighs on me heavily.”

Artist: Rachael Sage
Details: Rachael Sage’s newest release, Character, features an awesome photograph by photographer Bill Bernstein. The red, black and white contrasts are so crisp in this one. A New Yorker as is Sage, Bernstein is known for his photos of Paul McCartney, among other wonderful subjects.

Artist: Arielle Paul
Details: This gorgeous snap is like a modern sepia tone. The hat, the coat, the straw, Arielle Paul: amazing. Paul, a Los Angeles- based singer-songwriter, was photographed for her album, Burn, by Daryl Henderson, whose other beautiful work you can see right here.

Artist: The Dirty Nil
Details: The Dirty Nil’s cover for “Idiot Victory” has Halloween vibes going on. With a skeleton, orange lines and a yellow border, I am reminded of candy corn – which I like. Candy corn has again been voted a favorite Halloween candy in many American states.

Artist: IDK
Details: Maryland-based rapper IDK released his debut album in September. The album, called Is He Real?, features IDK with a goat and a sheep on its cover. Very pastoral!

Artist: yeule‘s Serotonin II
Details: Photographer Neil Krug is behind the lens for this cover. Krug’s also shot photographs for albums by Lana Del Rey and Unknown Mortal Orchestra, among others. From Singapore, yeule is now London based.

Artist: Various Artists
Cover: Reggae Gold 2019
Details: This compilation album includes music from Nicki Minaj, Estelle and French Montana, among others. But on the outside, it features photographic beauty. From the hair to the outfits, this cover got my attention. I also love that green eyeshadow.

Artist: Lo Boii
Details: New York’s Lo Boii have a release date of July 5th for their debut, Sex Doesn’t Sell…Anymore. First track to come out is “SWEETER,” whose cover shows off legs in sparkly fishnets crushing an ice cream cone. There must be shoes like this. Just wondering.

Artist: Two Meters
Details: Two Meters’ The Blue Jay EP features an adorable blue jay! Birds are always such great art subjects. I thought this would be a nice springtime cover to enjoy.

Artist: Mae Muller
Details: The cover of Mae Muller’s “Leave It Out (Acoustic)” is a collaboration between two Londoners, Muller and photographer Max Hetherington. Based on his site, it looks like he’s done a lot of fashion print work. It really does appear to be something I would see as I turn pages of fashion magazines.

Cool Cover: Calliope Musicals‘ Color/Sweat
Details: At first view I freaked a bit from this photo. I thought the cat was melting.  Is it? It’s also a real cute little creature holding a lollypop. I couldn’t locate much about the artist, Gracie Hinojosa, which is a shame.

Cool Cover: Maisie Peters‘ “Stay Young”
Details: Brighton, England’s Maisie Peters poses on this cover with an orange tabby. I love her belt too. Photographed by Dan Curwin, who has snapped stars such as Lorde, Peters looks so calm with that kitty.

Cool Cover: Yogi‘s “Baby”
Details: This cover for Yogi’s “Baby (Yo Gotti Remix)” looks a lot like a poster for a great Bollywood film. Check out the reddish orange letters outlined with black, contrasting with the brick red behind the woman.

Cool Cover: Ayanis‘ Direction
Details: This one looks like it could wonderfully be straight out of the ’70s (except for the bike, possibly. I have no idea what kind of motorcycle that is). I love that outfit, and the lighting is so smooth for this photo. 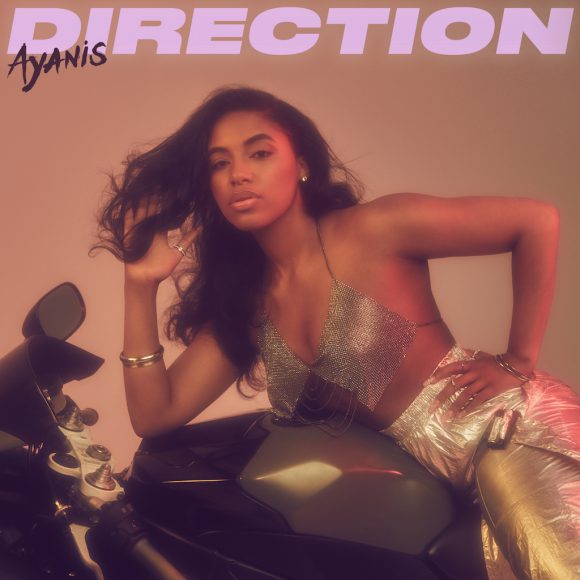 Cool Cover: Jaira Burns ‘”Numb”
Details: Cover art for Jaira Burns’ newest single, “Numb,” features her lovely blue hair in a bridal veil. Also, check out the gold party spliff. The singer-songwriter from the US described the track as “. . . for the times when people get faded; not for the reason of having fun, but to feel “NUMB.”

Cool Cover: EVOKEN‘s Hypnagogia
Details: EVOKEN’s latest album, Hypnagogia, features a barn owl in a hazy setting. The New Jersey metal band chose World War I as the theme for the songs. One song’s titled “Schadenfreude,” and another is called “Ceremony Of Bleeding.” The title track takes its name from that also hazy moment right between being awake and falling asleep. Adam Burke, who created the cover’s design, is a Pacific Northwest-based artist. Go have a look at his work! 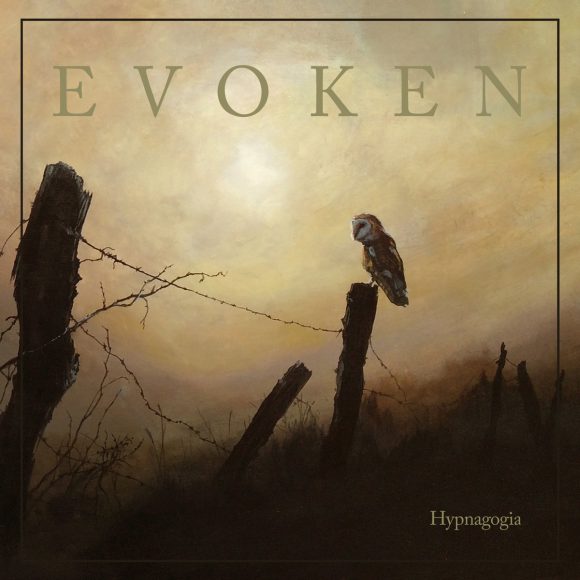 Cool Cover: Cosmic Kitten‘s Lobotomy
Details: Downey, California’s Cosmic Kitten keeps the cat theme going on their third album cover, featuring a purple cat performing a lobotomy on a person. Scary. Look at all those tubes. Could be fodder for nightmares, but cute cat. 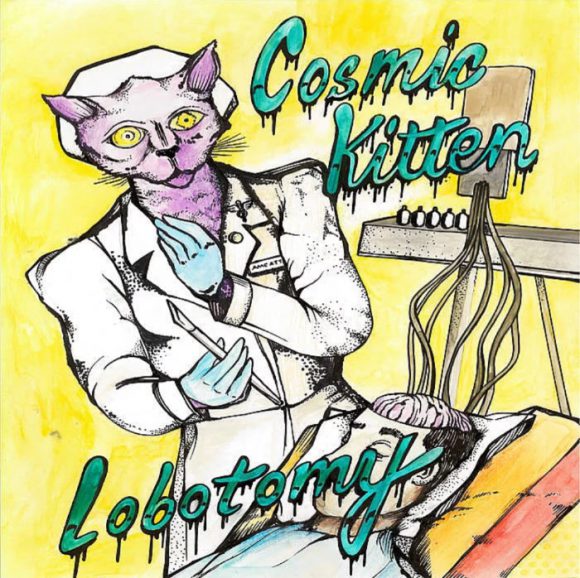 Cool Cover: Henry Derek Elis‘s The Devil Is My Friend
Details: The Devil Is My Friend is the debut full-length by Henry Derek Elis (The Sweet Meat Love & Holy Cult). Its appropriately gothic artwork comes from Travis Smith, whose work you may have seen on album covers for artists such as Avenged Sevenfold, Slayer and Opeth. Get Elis’ first album starting October 26th. 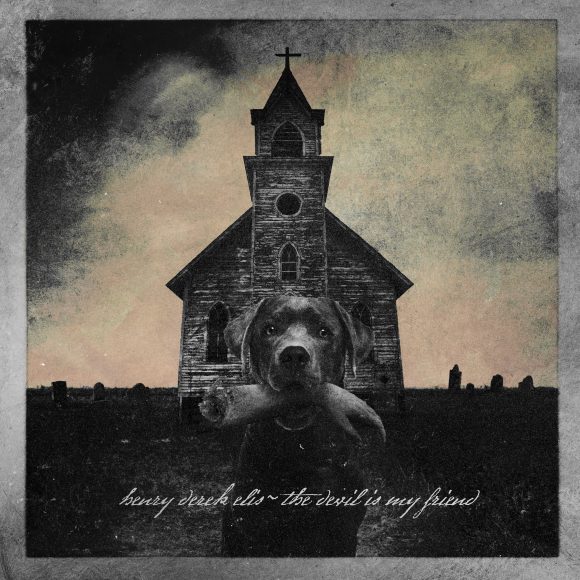 Cool Cover: Jackie Greene‘s “Crazy Comes Easy.”
Details: Americana singer-songwriter gets a cover illustration for The Modern Lives, Vol. 2 and the album’s first single, “Crazy Comes Easy” from artist Angie Pickman. You can get some of your own art from Pickman, whose work has appeared in places from Martha Stewart Living to Faction Magazine, over on her Etsy page. 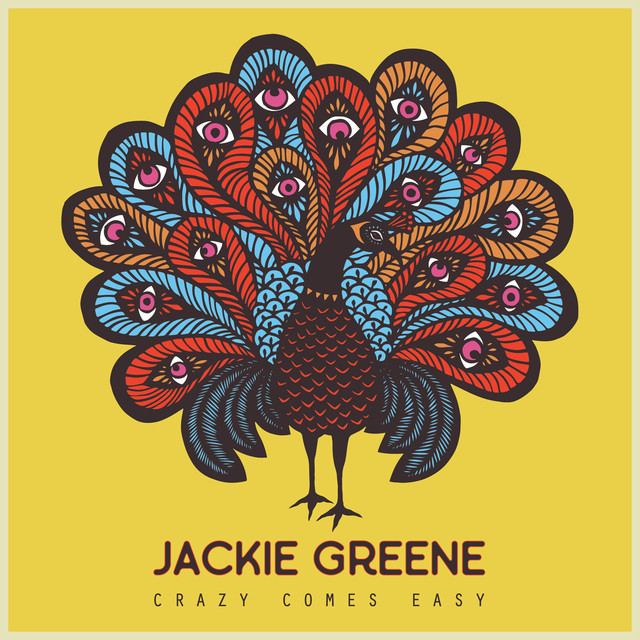 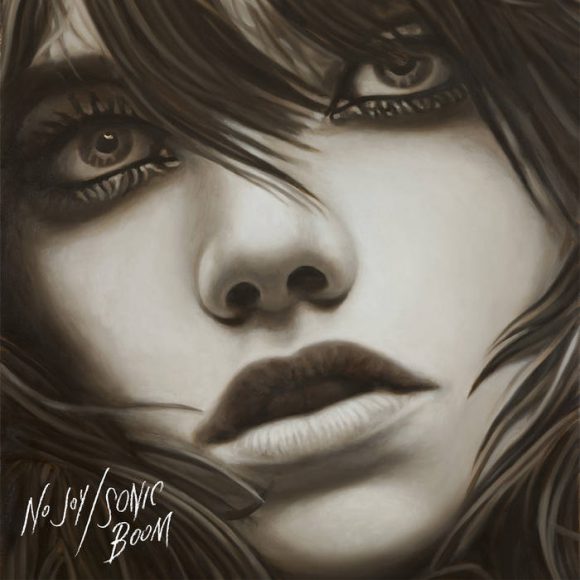 Cool Cover: Oh, Weatherly‘s Lips Like Oxygen.
Details: July 2018 debut release from the Dallas quintet, its cover has shiny metallic lips on it. Look at that melting lip gloss. 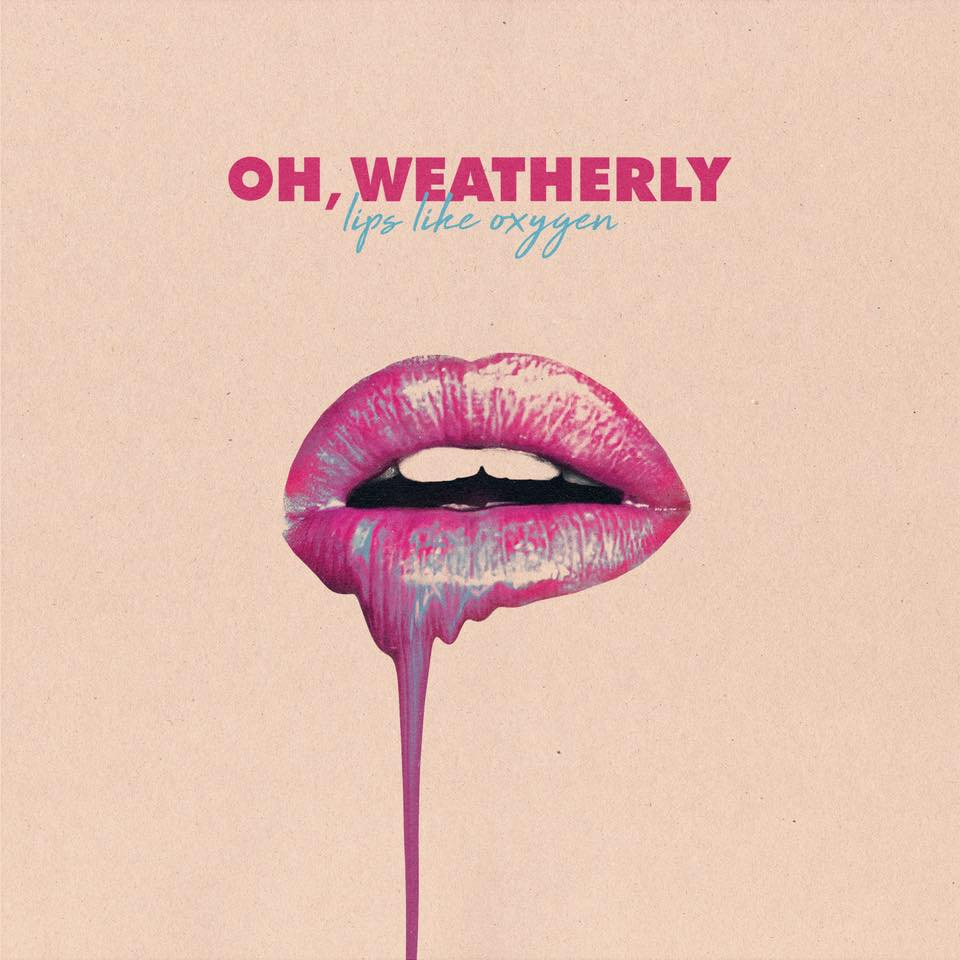 Cool Cover: Australia’s the Babe Rainbow‘s Double Rainbow.
Details: New LP from the Babe Rainbow out on July 13th. It will be available, at among other outlets, at Flightless Records, who will have an aqua vinyl version of it! 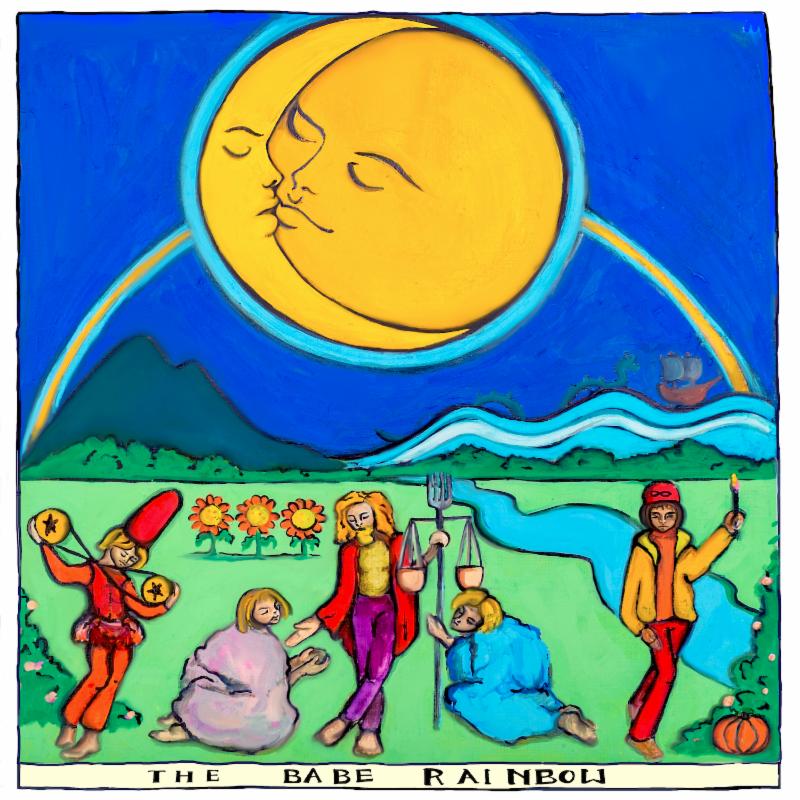