The magnificent Kula Shaker are set to play the Crocodile tomorrow, Tuesday October 4th. What a surprise for fans. Although Kula Shaker has played Seattle before, I have never seen them live, and I absolutely include myself in the band’s fanbase (this dream of seeing them is coming true!). I also mention the surprise factor because Kula Shaker celebrates their 20-year anniversary as a group, something Kula Shaker themselves nearly missed. Hey, when you’re busy playing great music and releasing seriously magical rock and perfect psychedelic albums, you can be forgiven for taking your eye off that number. 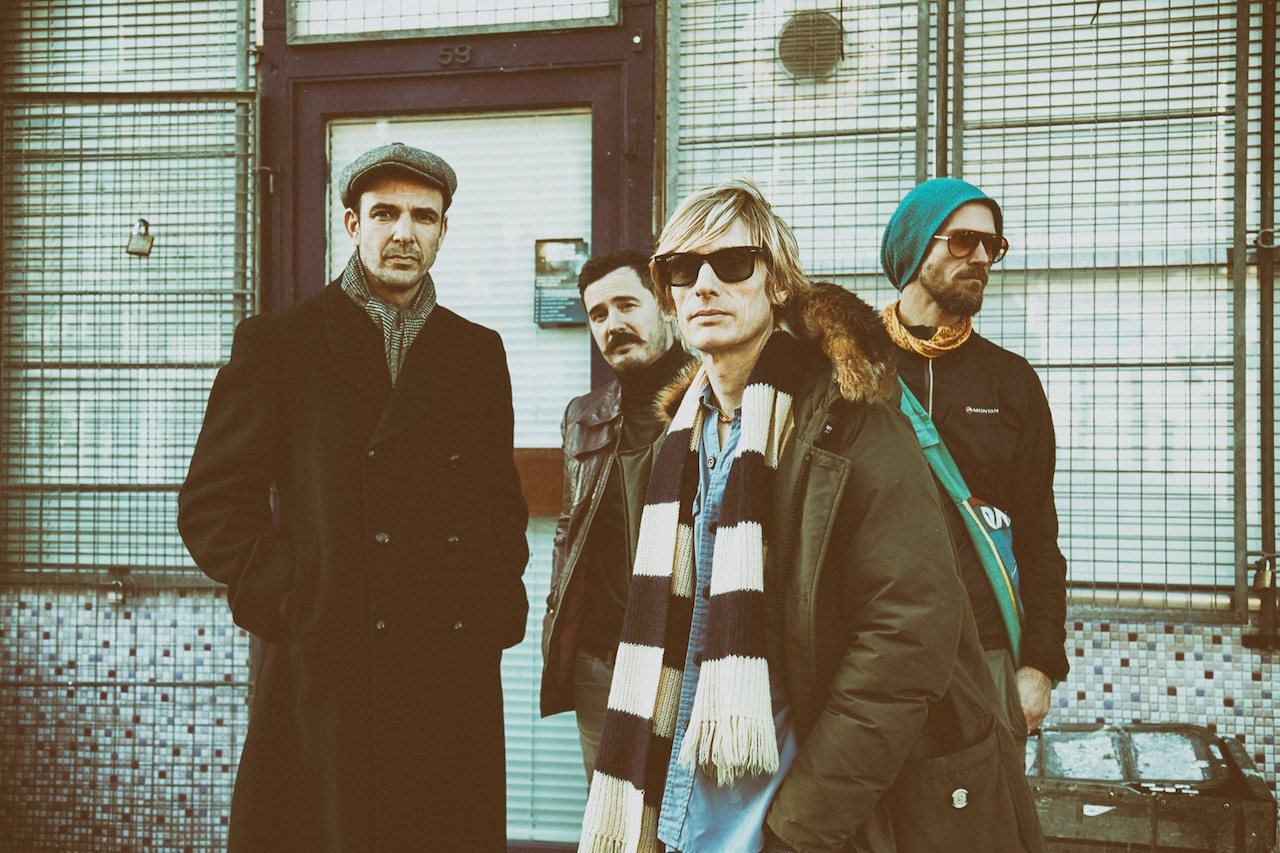 To mark Kula Shaker’s anniversary, the quartet created K 2.0, an answer to their 1996 debut, K. Brilliant. Both of them. K, which created and marked an entire British musical movement, remains one of my top 10 albums ever. A bit of a recap: In between those albums came Peasants, Pigs & Astronauts, Strangefolk and Pilgrims Progress, all capturing the lustrous Kula Shaker sound. But enough about my love for Kula Shaker. What did the group’s singer/guitarist/songwriter Crispian Mills have to say when I spoke with him last week? Mills, who was in New York at the time, discussed what’s happening with Kula Shaker, and what, with their record label Strangefolk, it’s like being their own bosses.

I saw a setlist for a recent show Kula Shaker show in Boston. How did you decide what songs you’d do for the tour?

Crispian Mills: Twenty years of material presents some problems. It’s a nice problem to have, all that choice. All of the songs, they really sit along side each other well, and it’s not like we had an electronic period that doesn’t fit with the rock and roll, so it’s all quite harmonious. Maybe we should put all the song titles on pieces of paper in a hat. Jumble it up. That’s the next approach. I think we wanted to give everybody a bit of everything, and it worked really well. People seem pretty happy.

CM: I don’t know if I’d use the word favorite. The enduring song which defined us and was our talisman was always “Govinda” because it’s a sacred chant, and it was the first song we played as a band. We christened it – for want of a better word – if you can christen sort of a Hindu song at Glastonbury Festival in 1993. It’s been with us and it’s been lucky for us. We’ve always finished our shows with it. It’s a beautiful song to play. “Infinite Sun,” which is the opening track on the new album, has also been with us from the beginning. It just took us twenty years to write it and arrange it into a song, but I think we first jammed that when we were kids – when we were nineteen.

What was it like going back to “Infinite Sun?”

CM: It’s this thing that you do, every time you have an album to make, you have some songs that you’ve just come up with, and then you have the bottom drawer . . . what have you got to dust off and look at with fresh eyes and ears. It was lovely to go back to. I think I came back to it because I’ve been playing it to my kids on an acoustic guitar (Mills has two boys, four and seven). I think I probably would have been a bit self conscious about singing that song if I hadn’t had kids to open my eyes about the possibility.

We jammed it at a free festival back in the day. Probably before we were even called Kula Shaker, when we were the Ks or the Lovely Lads or the Charming Chappies or whatever we were called at the time. It’s First Nation, that’s where it comes from. I’ve always been inspired by those traditions too.

How did you start playing the sarod?

CM: The first Indian classical music album that I bought, which I loved, and that I was able to appreciate as a piece of music rather than background noise in an Indian restaurant, was a sarod album by Ali Akbar Khan. He was the greatest sarod player that ever lived. He was the son of Ravi Shankar’s guru. It’s (the sarod) got a bit more attack, It’s a bit more plektrum friendly than a sitar. I had a teacher in England; I was lucky. I learned a whole other approach to playing music, which is intuitive and more spiritually influenced, (but) I wouldn’t consider myself an Indian classical musician at all. I’m an enthusiast.

I read an early interview where you said it was Kula Shaker’s mission to get Sanskrit on the radio.

CM: It was Sanskrit, but it was also the idea that it’s a sacred chant. It’s like a magical spell that purifies and uplifts consciousness. It was kind of a radical idea, kind of like dumping LSD into the water supply. It was a sort of prankster approach. We weren’t sure we’d actually pull it off, but we did. The great thing about pop music is there are no rules. It can constantly surprise you as to what it presents. We were really excited to be able to surprise people.

What were your first shows as Kula Shaker like? You were very young.

CM: Our first show was at Glastonbury. We hid in the back of somebody’s van and we managed to get some electricity from the Hare Krishna tent. They were very generous. When we were onstage we always felt we had a future, we always felt confident about that. It’s the time between the gigs where you have to keep the confidence it will work out. It was about two or three years, it took us to get a proper record deal that supported us. When you’re nineteen, twenty, twenty-one, that feels like decades. We had to hold our nerve, keep it together, because we didn’t have an alternative, we didn’t have anything to fall back on.

Were you surprised your sound went over so well?

I was surprised the radio stations played it. I didn’t know what to expect. Primarily we’ve always been a live band, and recording albums was something we struggled with, struggled to capture the same kind of excitement.

With K 2.0, you have captured Kula Shaker for sure.

CM: We were surprised the album turned out so well. We wanted to do something for the twenty-year mark, but realized it was twenty years very late. No one had been paying attention to the calendar. At the last minute, somebody tipped us off. We scrambled. We started writing. It could have been awful to have rushed it like that, but the deadline focused everybody. A lot of creativity came out of that.

How does writing songs with a bassist, Alonza Bevan, affect Kula Shaker’s music?

CM: Alonza plays all kinds of instruments. . . piano very well, acoustic guitar. He’s a multi-instrumentalist. He’s just off with the faeries in the woods in Belgium [Bevan is also half of the band Tumblewild, based in Belgium]. You have to go out there and pin him down, and get him to focus. He’s the main guy I’ve written with from since I was a kid, so it’s very natural and quick when we’re both focused.

Is having your own music label all great, or are there difficulties?

CM: It’s difficult because you’re on your own. We made our first record as an independent in 2006, and at that time, the record industry was on fire. It was the apocalypse. No one knew what was happening. It was a very hard album to make; there was no support financially, and we didn’t have a producer. We had to make that transition from working in someone else’s studio with a producer to doing it ourselves. It wasn’t until we were doing Pilgrims Progress that we really had our own place and we were confident and started to create our own sound. K 2.0 is a full circle. We had all the energy and excitement and inspiration that we had with K but we knew how to manage it.

Kula Shaker’s got some beautiful cover art for their singles and the new album. Who’s the artist?

CM: Kate Baylay. Yeah, she’s cool. She had done one special edition cover for Philip Pullman’s Northern Lights. We saw that and got in touch with her. Interestingly, she’d just gotten back from India. It’s the Indian feel but it’s also got that medieaval, romantic, fairy tale vibe that Pilgrims Progress had. It’s a nice mix.

CM: Yeah, it’s a big part of my life. I’ve got friends and family there. I don’t go there as a tourist anymore; I’ve got roots there now. It’s an intense place and it’s changing very fast. Everyone’s got money fever. There are things about modern India which I don’t like, and a lot of Indians don’t like, but it’s got its ancient heart. There’s something there that connects you to your spirit. I don’t even think of it as being Indian. It’s something deeper even than any country. When I come back, I feel even more connected to the world around me. It’s a special place.

You come from a family working in drama. Why did you choose music?

CM: Any passion chooses you. It’s like falling in love, you don’t choose who you fall in love with.

You played the now defunct show Top of the Pops. Do you remember your experience?

I remember the first time we played Top of the Pops, which was when we played “Tattva.” It was a big show. It was still something that people watched. I think around the time of downloading it became obsolete because no one was buying singles anymore. Nobody felt connected to these songs anymore. People weren’t investing in their bands by buying their stuff. I don’t know what quite what has replaced it now. I think gigs have replaced it.

At the end of “Tattva,” there’s a gorgeous string sound. What is that?