Dark, Macabre, Literate, Love, Hate, Beautiful, Traditional, Original, Country, Folk, American Gothic. All of these words describe the unique music and sound of The Handsome Family. They shared their brand of Americana with a half full Tractor Tavern and even though the venue wasn’t packed, they put on an entertaining show. One reason for the smaller audience may have been the start time. While the doors open for most Tractor Tavern shows at 9pm with the first act hitting the stage around 9:30pm, the doors for this show opened at 8pm and the first act went on at 8:30pm.

Singer-songwriter Sean Rowe opened and impressed me from the start with his stark baritone vocals and his song structure, at times he chanelled Leonard Cohen. The audience was sparse for his set with more people arriving every minute. I got the sense that he gave the same performance to the the audience at the Tractor as he would have given to a packed house. His song “Jonathan” is, to me, close to a perfect song. Rowe makes it completely his own, even though you can hear hints of Cohen and Nick Cave throughout. All of his songs are very well structured and melodic. “Time to Think” is a literate slow-burner where Rowe contemplates decisions made.

During Rowe’s set I turned to look back at the merchandise table from where I was sitting and I was surprised to see Brett and Rennie Sparks, aka The Handsome Family, manning the table and chatting it up with friends and audience members alike. Usually a band of their stature hides in the backstage wings of the Tractor until it’s time to take the stage. One impressive thing about the Handsome Family is that they try to mix up their set list for almost every show. I talked with a guy who saw them in Vancouver, B.C. the night before who said they played completely different songs both dates. They hit the stage with Brett whistling the intro to “The Loneliness of Magnets” through his teeth. They performed a career spanning set, performing many selections from their breakthrough album, Through the Trees, and their 2009 album, Honey Moon. 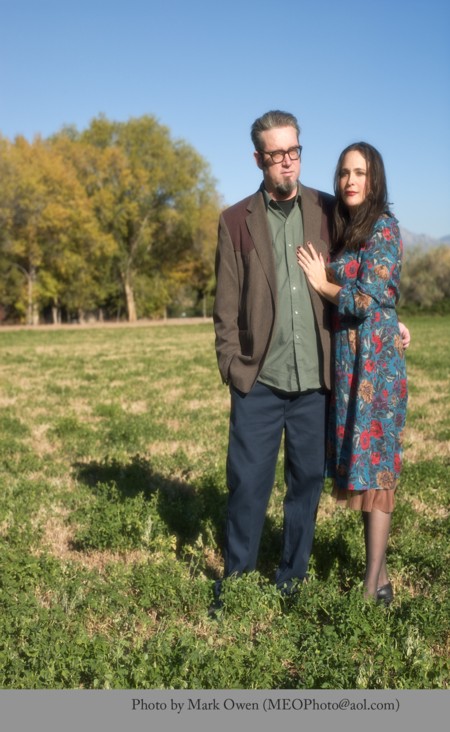 Brett and Rennie provided darkly humorous banter between songs and interacted with the audience throughout the set. “Weightless Again,” “My Sister’s Tiny Hands” and “The Giant of Illinois” were crowd favorites. They were at their best when they shared vocal duties on the duets. Rennie’s higher register perfectly complements Brett’s deep baritone. At times their duets were reminiscent of the traditional country duets of yesteryear (Johnny and June, Loretta and Conway, etc.).

Their best duet, “Little Sparrows,” sadly was not performed. “So Much Wine,” a traditional country/folk hybrid, showcases their talent for odd, storytelling lyrics. Musically “The Bottomless Hole” is a traditionally structured country folk song. The music almost takes the focus off the story of a man falling into a bottomless hole behind his barn.

Other highlights included Brett and Rennie teaming up on vocals with Rennie on banjo for “When You Whispered,” an inspired duet. “Love is Like” showcased Brett’s baritone and his ability to inject an almost comical inflection into the vocals.

Unfortunately because of the early start time, concert-goers kept arriving all throughout their set surprised that it was already in progress. The Handsome Family came back out for an encore. Within a minute of the end of the concert, Rennie was back out manning the merchandise table. On this Thursday night, The Handsome Family and Sean Rowe provided excellent music to sit back and enjoy.