Admittedly, it did feel just a bit awkward arriving at Seattle’s beautiful Paramount Theater without a small child in tow to see international children’s music and TV stars The Wiggles perform. This time, I only brought my camera as my youngest child, a rabid fan of The Wiggles in her youngest years, was off to summer camp. I had been to see The Wiggles years ago with her when she was around 2 years old in a huge arena, driving an hour there and back because she liked them that much. This is what parents do, just to see a few moments of wonder and happiness on those little faces.

So this time as I waited for the show to start, I just watched as gently smiling parents carried in their infants or herded their toddlers to their seats, many of the little girls outfitted in pretty little dresses for the event. The entire feel was calm and mellow, which is something you might not expect when you gather a bunch of very small children together into a confined space. But perhaps that has something to do with the very nature of The Wiggles themselves. In many ways, The Wiggles continue the legacy of “Mr. Rogers’ Neighborhood,” in their very positive, very gentle, and deeply respectful take on both entertaining and educating the youngest in our society. They construct simple but very clever songs that children can easily sing along to: fun, silly, interactive, and upbeat. The four Australians that make up the 2011 Wiggles are original members Anthony Field (blue) and Murray Cook (red), and Sam Moran, who replaced Greg Page a few years ago (yellow) and understudy Brad Carroll filling in for Purple Wiggle Jeff Fatt, who is recovering from heart surgery. 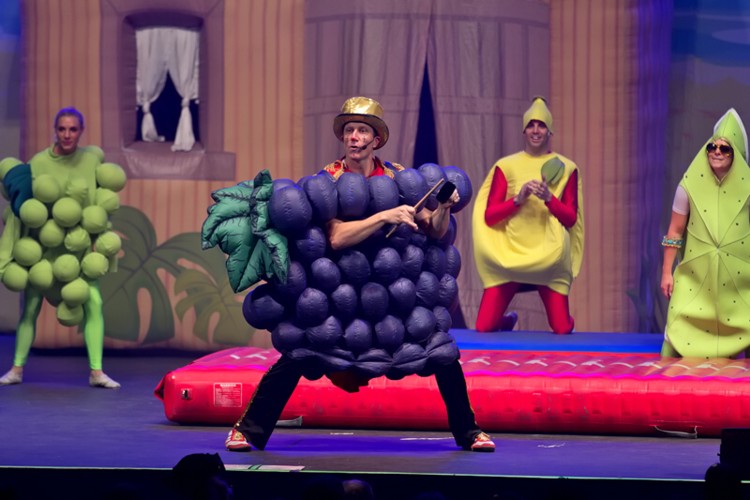 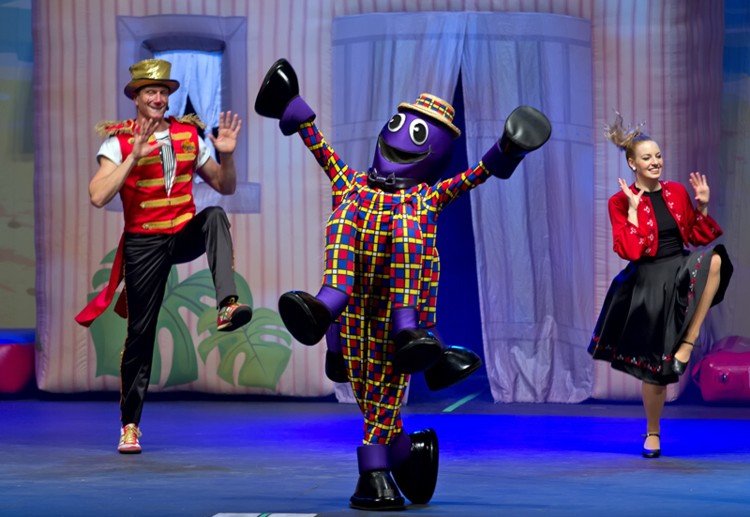 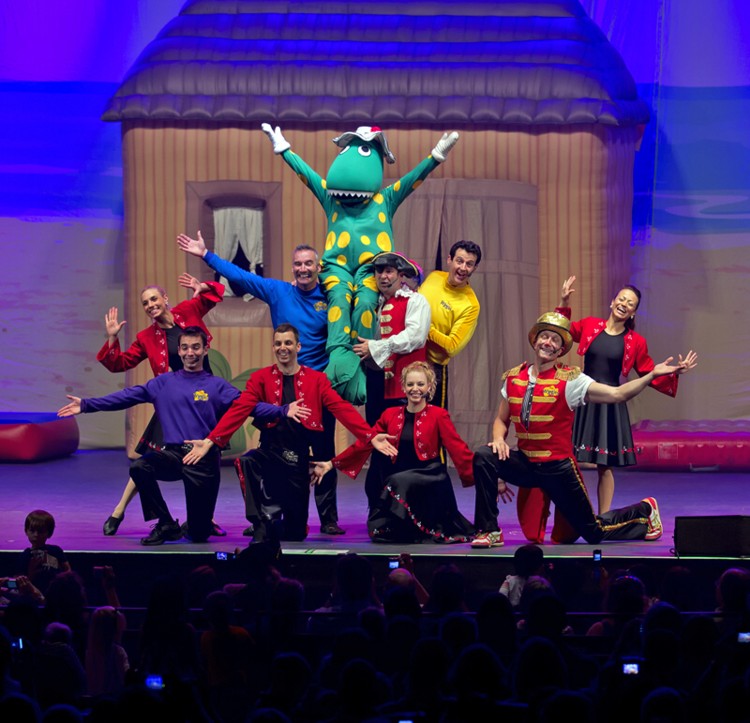 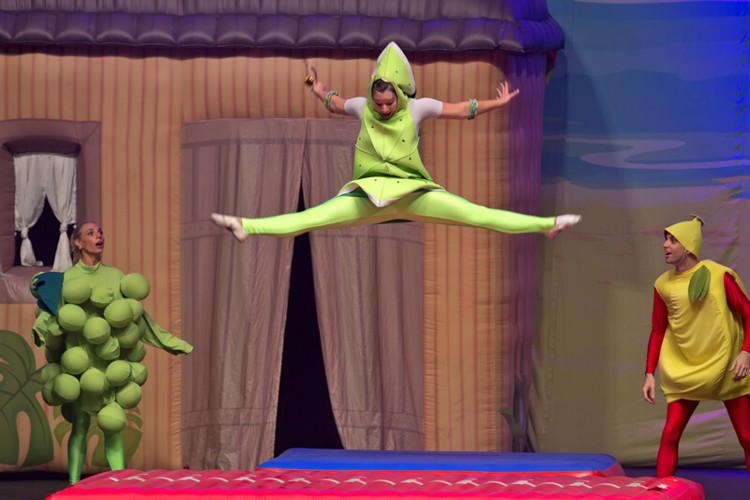 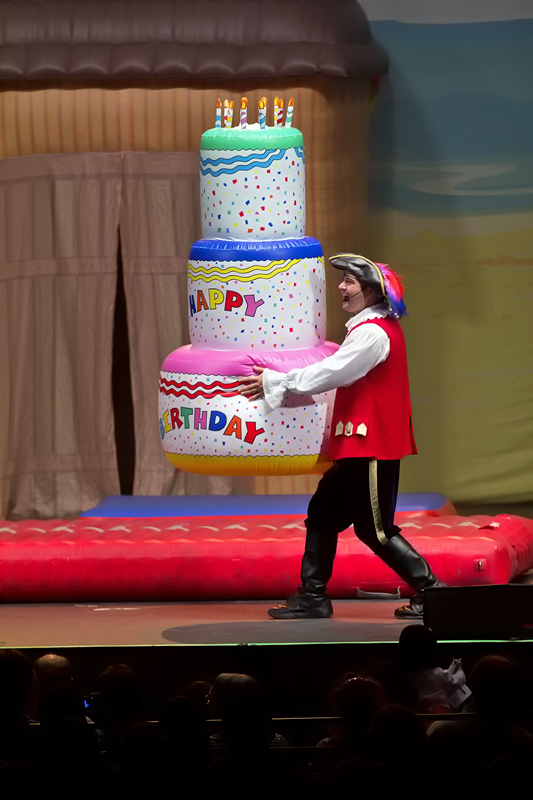 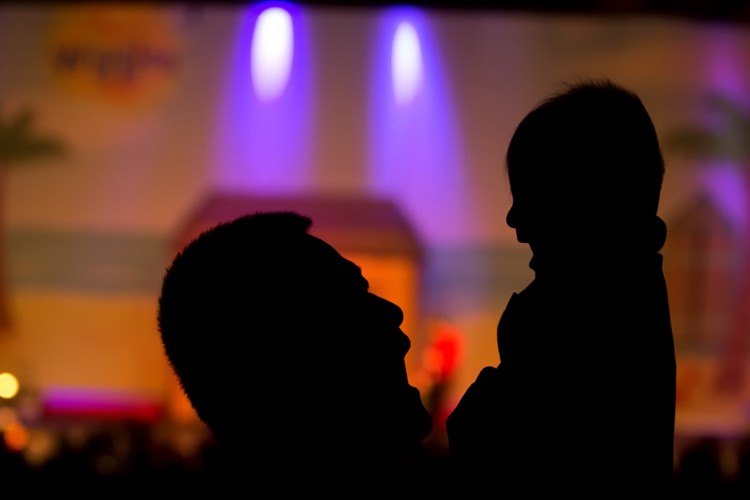 The Wiggles – photos by Marianne Spellman

The show began by mentioning Fatt’s illness right away. The theater was darkened and a large video screen showed a short clip of Fatt from the hospital, telling the children that he was feeling good, that he missed being on the tour, and hopes to perform again very soon. The screen was then raised, the house lights went up, and The Wiggles appeared. Murray Cook took a few extra moments to explain to the children more directly what had happened to Fatt (an irregular heartbeat which necessitated a pacemaker implant). To adults, this may seem strange or grim, but again, this is an example of The Wiggles’ respect for children. They understand from twenty years of working with children (three of the original Wiggles were preschool teachers) that changes and transitions can be very difficult, and that kids deserve information appropriate to their development. It’s admirable.

With that addressed, The Wiggles began a fast-paced and highly energetic 75-minute “Big Birthday” show that was as gymnastic as it was musical. Let it be said: these guys are in shape. The dance routines were filled with leaps, flips, jumps, human pyramids, costume changes, forays into the audience, which easily kept the little ones’ attentions and certainly impressed me. The core Wiggles were joined by show characters Wags the Dog, Henry the Octopus, Dorothy the Dinosaur, “fifth Wiggle” Captain Feathersword (Paul Paddock), and a host of dancers/gymnasts. The entire cast beamed sunny smiles almost the whole time. At one point in the show, every child who brought a sign to the show was asked to hold it up, and was thanked personally by name. Each Wiggle came into the audience to gather roses that children had brought with them to give to Dorothy the Dinosaur (who loves roses), waving and speaking one-on-one to some of the tots. The parents and kids all sang along to all of the songs, like “Hot Potato,” “The Monkey Dance,” “Get Ready To Wiggle,” “Rock-a-Bye Your Bear,” and yummy, yummy, “Fruit Salad.” Yes, I knew all the words, too, but I would have looked even more awkward singing along at my camera position at the soundboard.

Near the end of the show, Moran announced that for “Twinkle Twinkle Little Star” the house and stage lights would be dimmed, and for parents to seat their dancing children for a moment so they would be safe in the dark. In the deep blue light, small gold spotlights swirled around the stage as everyone sang, making for a lovely, sweet moment. Seeing the parents rock their babies and hug their preschoolers, swaying to the music, was a warm and familiar old feeling.

After a rousing ending and many bows, The Wiggles and friends left the stage, and the parents and kids filed out of the Paramount to buy T-shirts and sparkling glow sticks at the merch table, many little ones taking sweet rides on Daddy’s shoulders, some drifting off to sleep in arms. It was a delightful evening out for all.

Review & all photos by Marianne Spellman 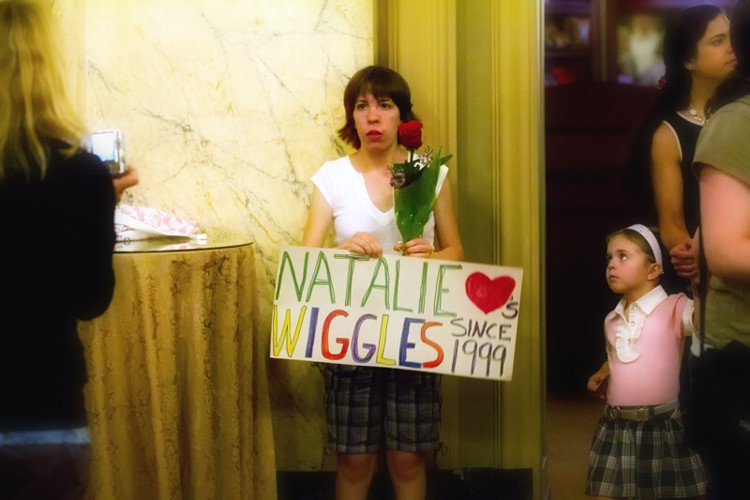 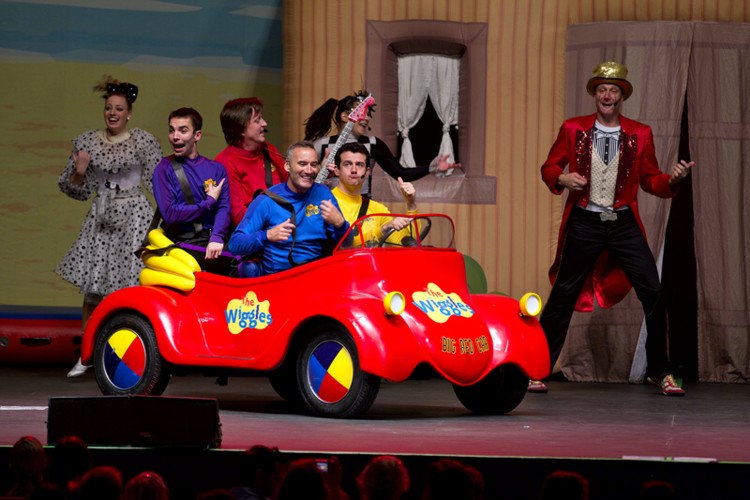 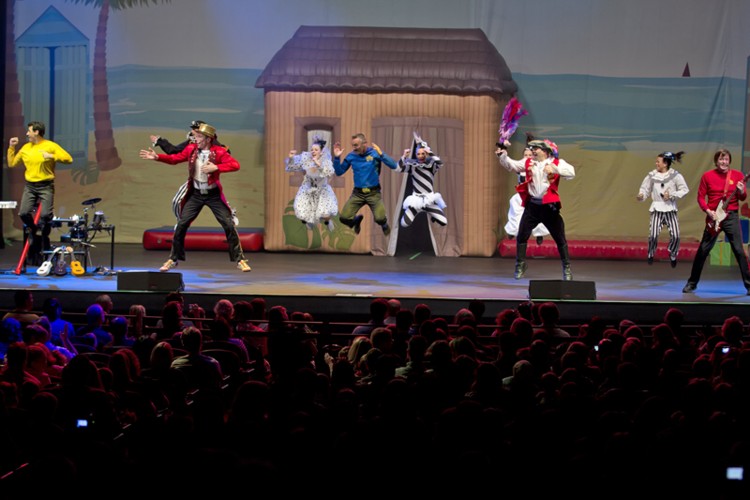 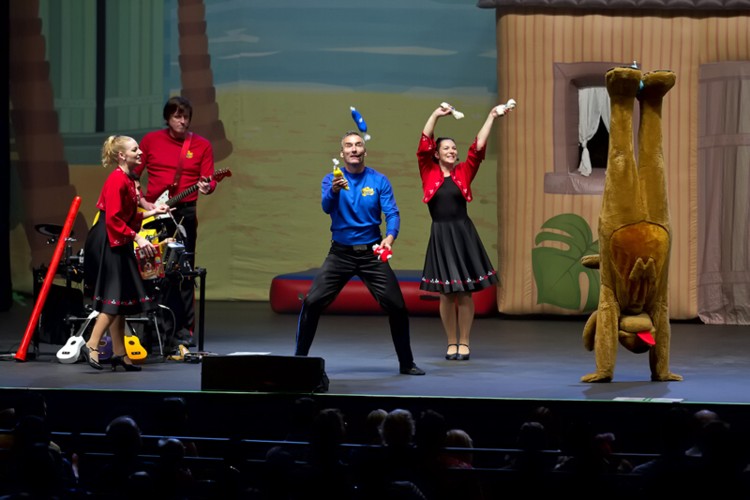 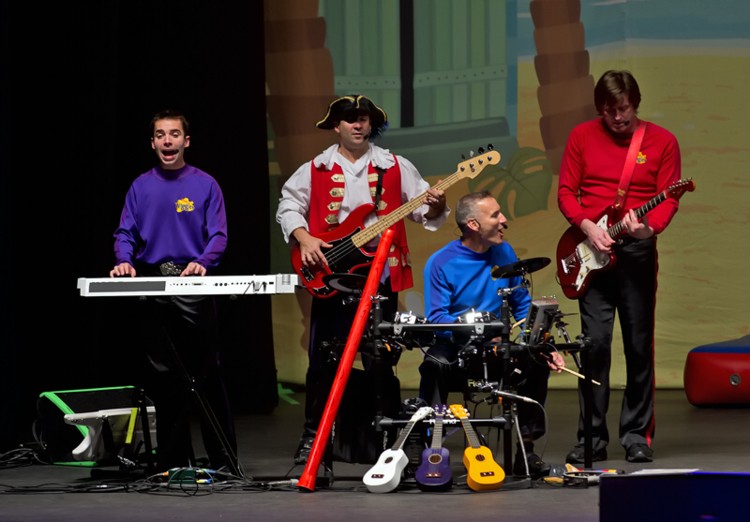 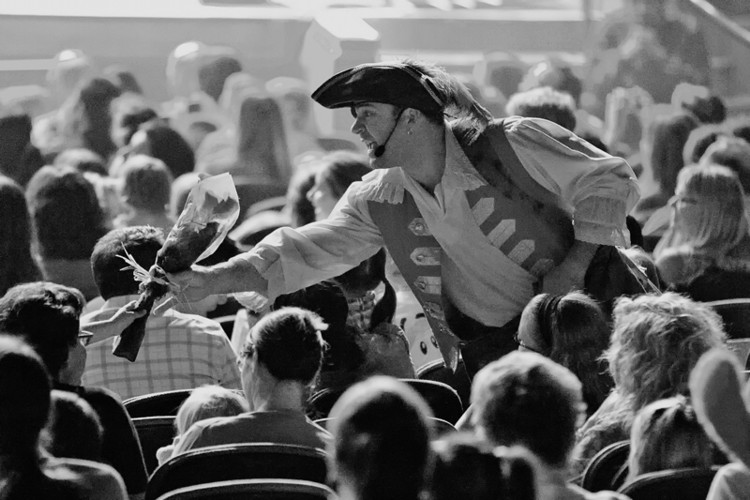 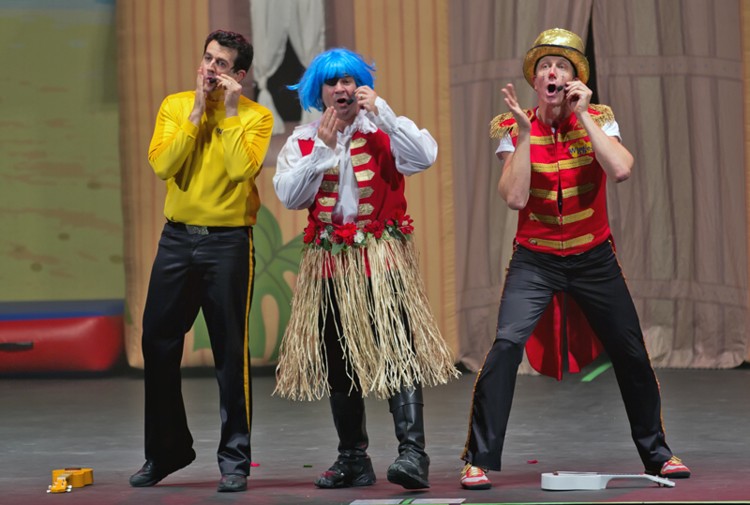 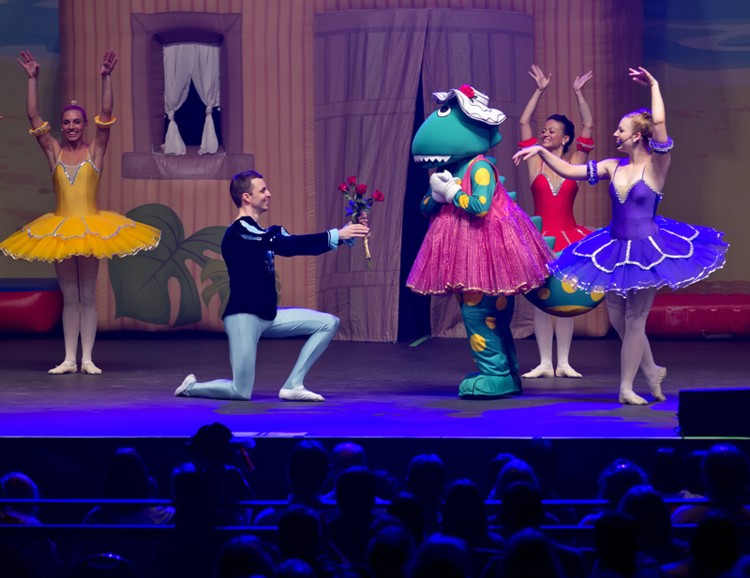 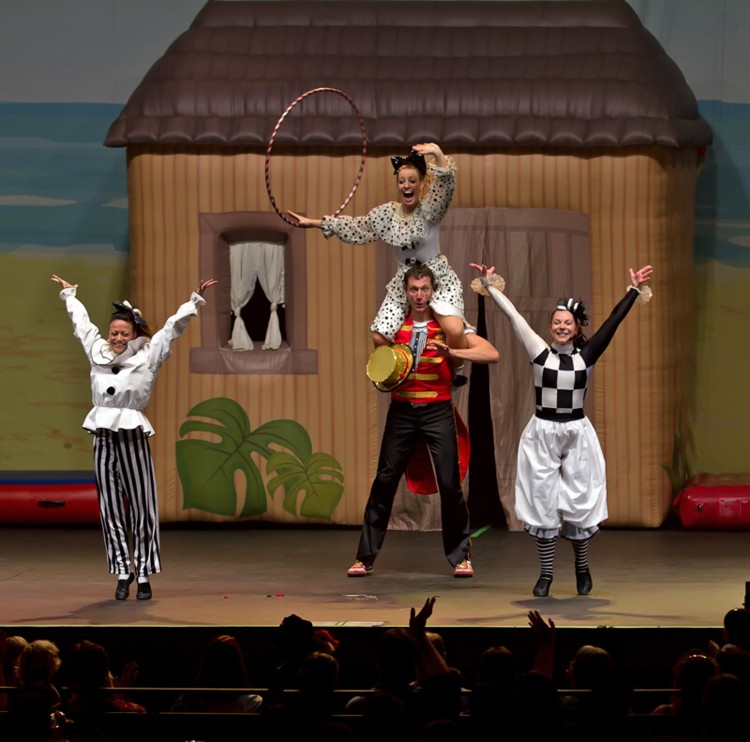 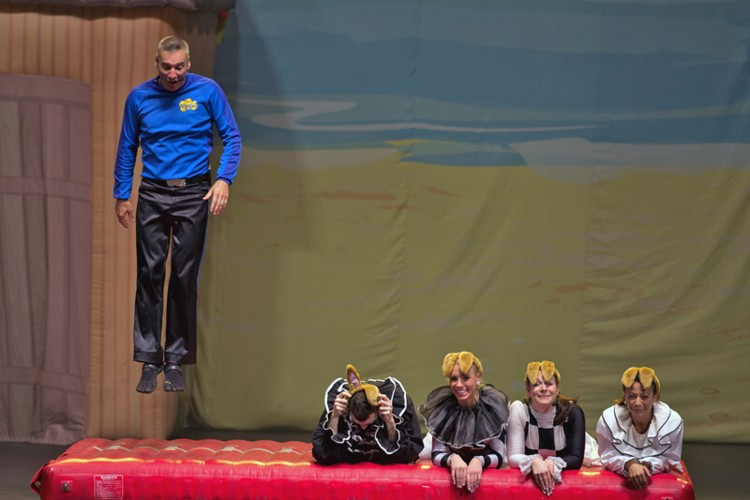 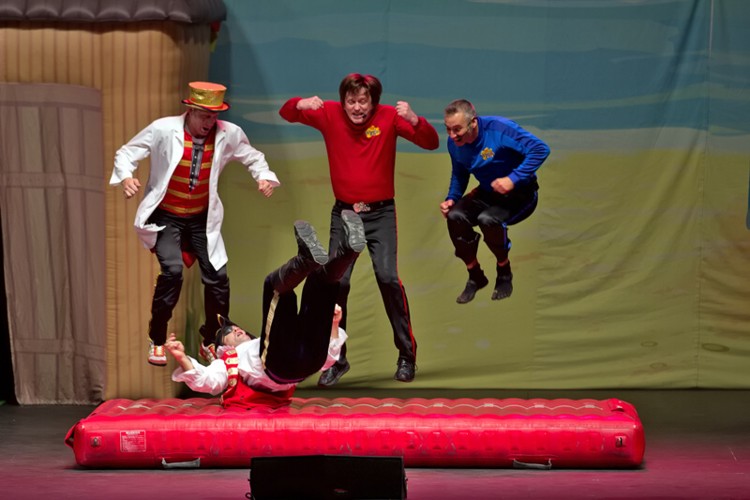 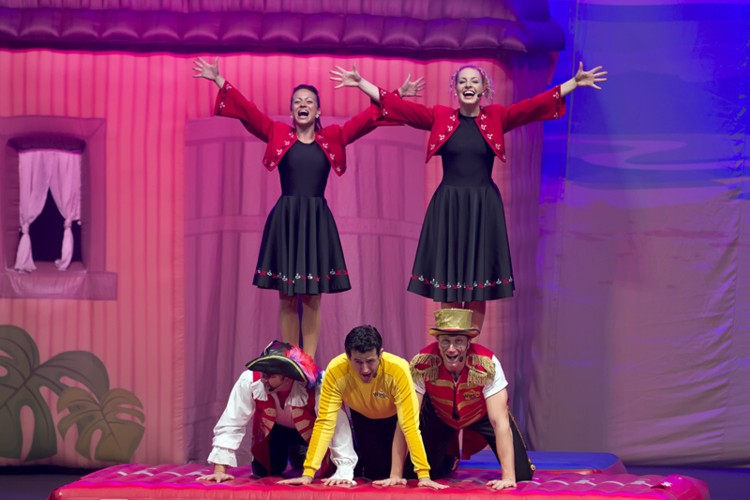 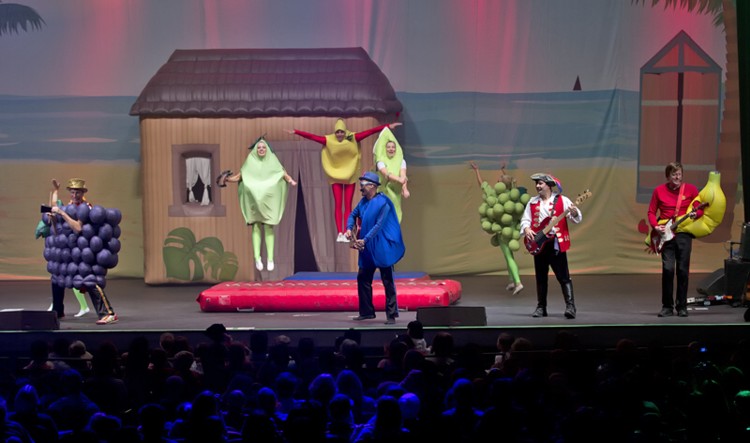 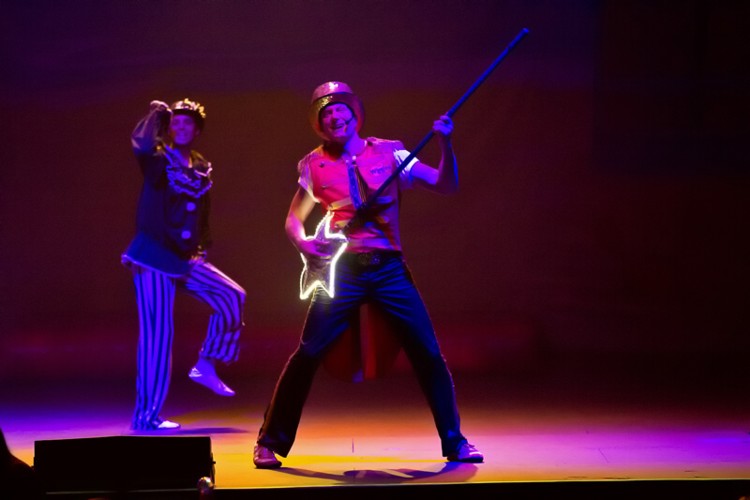 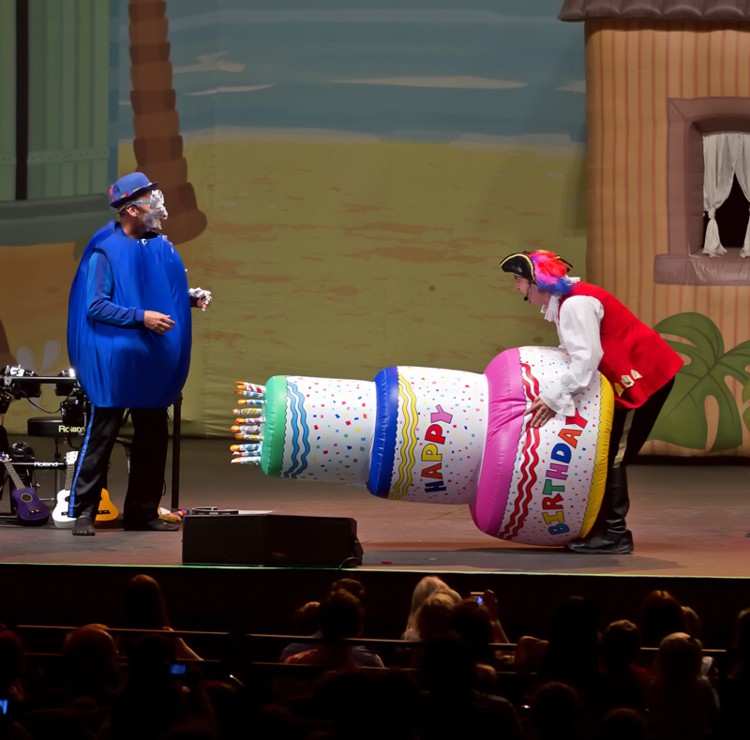 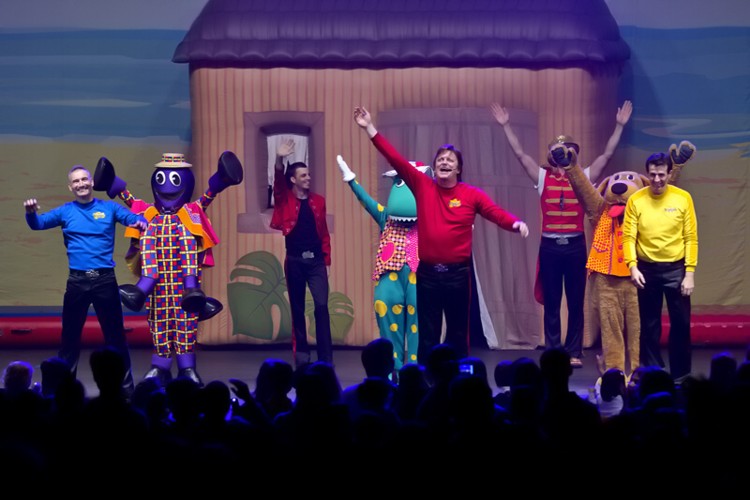 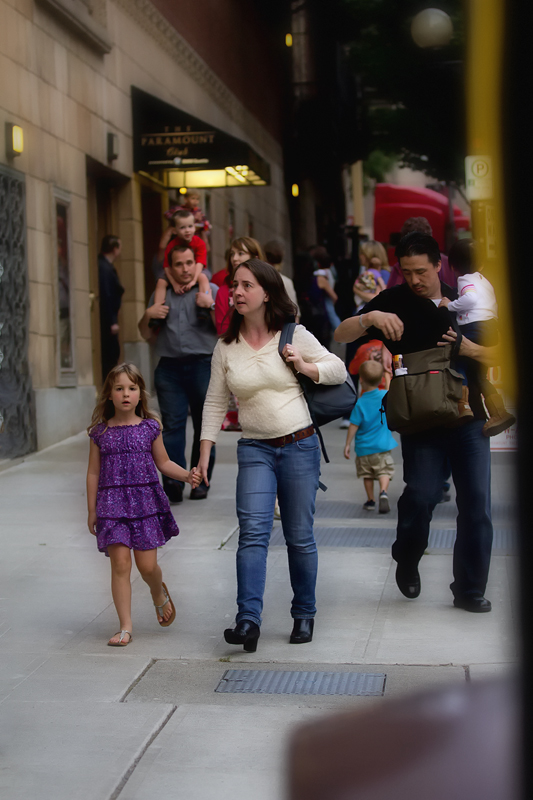 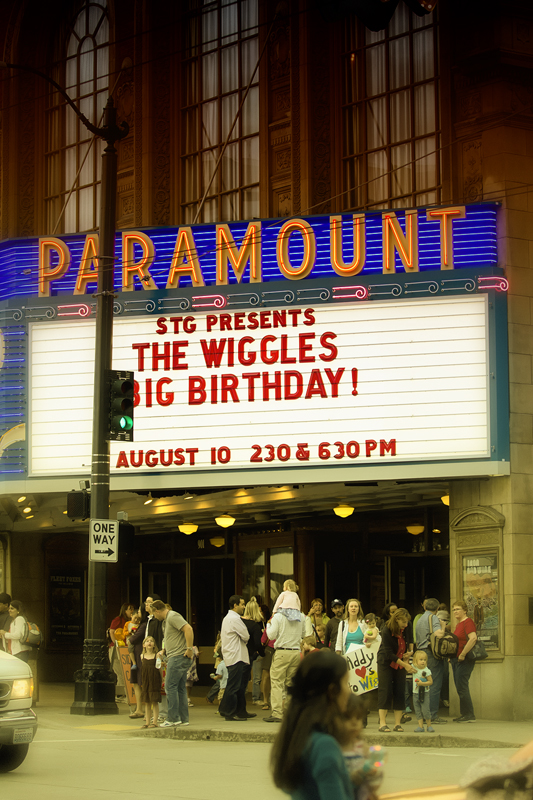