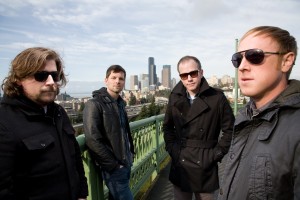 Seattle band Virgin Islands have perfected the nearly lost art of urgent, angular post-punk intertwined with lyrics as razor-sharp as they are eloquent. Front man Michael Jaworski has always worn his convictions on his sleeve in bands like The Cops; with newest project Virgin Islands, he’s perfected the language of poetic unrest with a mighty sound genetically linked to the spirit of bands like The Clash. In a world that feels increasingly alienating, it’s rare for a band to cut through the static and say something that sounds like a manifesto- if you’re paying attention.

Recently Michael Jaworski, front man of Virgin Islands and founder of Mt. Fuji Records, took a few minutes from his hectic musical schedule to chat with me about everything from his sharp-shooting lyrics to the appeal of island life.

Back Beat Seattle: What have you been up to this summer…didn’t you just return from a tour?

Michael: We just did a two week tour of the west coast, which was pretty great. It was our first time outside of the NW and we had some great shows. The Bay Area loves Virgin Islands! Also, the weather in California was spectacular and it was a nice break from the crappy Seattle summer we’ve been having so far. We just had a great Block Party show and played the KEXP BBQ on August 6th. Other than that, we’re working on new songs and plotting our next moves.

Can you tell a little about the story behind the song and album title Ernie Chambers v. God?

Michael: Ernie Chambers is a politician from my birthplace of Omaha, Nebraska. He was a state senator for around 40 years who represented a predominantly black neighborhood in Omaha and was probably the only black state senator in Nebraska for a majority of those years. He was one of the only progressive politicians in the state and he stood up for the minorities and other disenfranchised groups. He was a major pain in the ass to all of the conservative senators because he’s an extremely smart dude who fought them tooth and nail on so many social issues. He filed a lawsuit in the Nebraska Supreme Court against God seeking relief against natural disasters, destruction and terror in the wake of Hurricane Katrina. He was real punk rock politician.

It’s refreshing to hear a band that has some very up front socio-political convictions these days, it almost seems to be a lost art. Writing this way seems to be a piece of punk rock DNA that has always been your natural writing state. Do you find that people pay attention and ask you questions about your lyrics? Is it something you consciously do?

Michael: I do think people pay attention to the lyrics I write and it does come up in interviews. Both of which are flattering and encouraging. I definitely feel like politics is life and art should reinterpret and comment on the important parts of our life. I also believe that artists have a responsibility to inspire people to think about questions and issues that are bigger than the day to day trappings of regular routines. Hopefully my lyrics inspire people to dig a little deeper and encourage people to ask questions beyond the status quo. I think that punk and hippie artists are cut from the same cloth in a lot of aspects. We both want the world to be a better place.

What’s up next for Virgin Islands?

Michael: We’re going to keep playing shows and touring throughout the rest of this year, all while working on new material for our next record. The general plan is to have another full-length out by fall of 2012. Also, we’re trying to come up with the cash to fly the band and a bunch of friends to the Virgin Islands to record “Virgin Islands: Double Live from the Virgin Islands.” I’m not kidding.

You run a record label (Mt. Fuji Records), book over at the Sunset Tavern, you’re in Virgin Islands as well as the mighty band The Cops…what else are you up to these days? Did you ever think your life would be as immersed in music as it continues to be today? You’re very fortunate that way. We have it good in Seattle…so much talent, so many good people…

Michael: I do feel very fortunate to have a life that is immersed in music. It’s a big part of who I am and it’s a big part of my spirituality. I also love spending time with my family and friends and I’ve gotten better about forcing myself to relax every once and awhile. My wife has been a great role model and encourages me to rejuvenate myself and live a healthy life. I try to have some fun too!

Can you share anything about the making of your new video, “No Doctor”?

Michael: We had a great time making the video with the extremely talented Ryan McMackin and Andy Seaver. We worked really hard for 4 or 5 days to get all of this amazing footage. It’s amazing how much gets left on the cutting room floor, but we’re extremely thrilled with the final edit. It’s a crazy, frenetic video that is supposed to inspire a little anxiety in the viewer. The final scene of the video ended up being a fortuitous shot that sent me to the emergency room. Fortunately, I only ended up with some bumps, bruises and sprained body parts. It was painful but in the end it was worth it.

Virgin Islands released debut album Ernie Chambers v. God in May via The Control Group, and it’s one of this year’s best rock records by far (pick it up HERE). Their next show is Friday August 26th on their home turf at The Sunset (Seattle, WA) with Nazca Lines (record release show) and Blood Orange Paradise.

As for the video that ended in a trip to the emergency room, check it out below- and pay close attention to the painful-looking last five seconds: