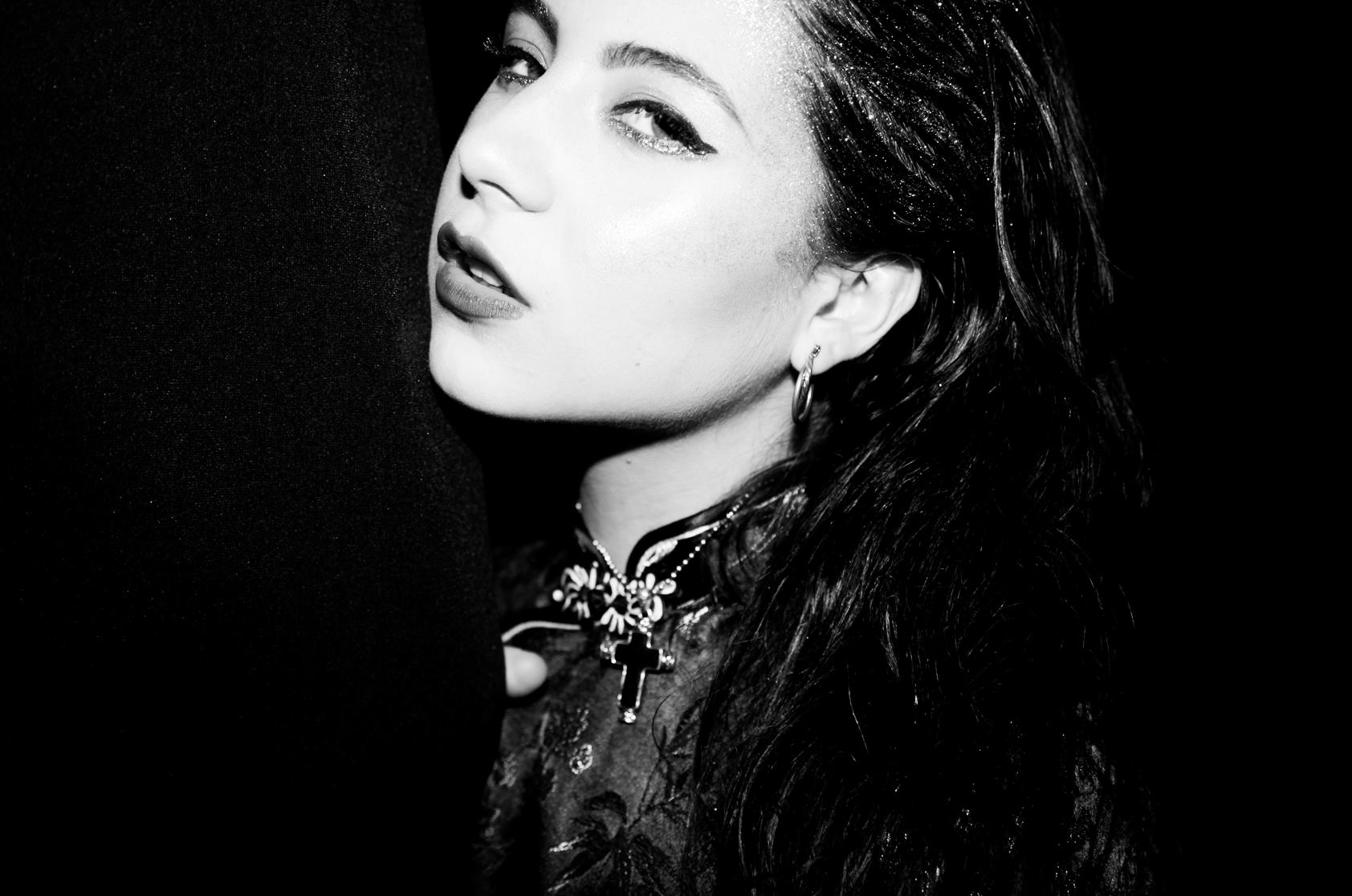 I love Kitten. I love cats, and I thought I might like the band just because of the name, and sure they got my attention first because they’re called Kitten. So I checked them out, and Chloe Chaidez’ band is extraordinary pop musical goodness. Chaidez, co-wrote four releases with Chad Anderson: Sunday School (2010), Cut It Out (2011), Like a Stranger (EP, 2013), and this year’s debut full-length, Kitten. The first three releases offered some really sexy tunes such as “Kitten With a Whip,” “Like a Stranger,” and “Japanese Eyes.” Kitten, well, it whips you right in the face with more of an electronic sound, and every single song is awesome.

Chaidez had an early introduction to music; her father, Mike Chaidez, was the drummer in Los Angeles’ Thee Undertakers. Her first instrument was bass guitar. Well known for her songwriting ability, Chaidez is also known as a singer and performer. Turns out studying gymnastics may have influenced her live performances. “There’s a lot of rhythm involved in gymnastics, especially the floor routines. I sort of incorporate it into the stage performance.” I also wondered what kinds of things she thinks about while performing. Does she just black out? Chaidez tells me “I can’t help but lose myself. It’s really weird. It’s spiritual, and a sacred thing to me. I’m not thinking of anything except for what I want to do in that moment, and of course, the band.” With bands Joy Division, the Psychedelic Furs, and the Smiths as influences, Chaidez seems drawn to unusual lead singers: “Ian Curtis was a captivating performer. I love non-traditional rock stars. I never want to be that performer’s that’s like, “Clap your hands!”

After playing shows in Los Angeles, many at a place called the Smell, Chaidez recalls “I played there a lot. That was one of my first shows with Kitten. I had this silly, glittery pink guitar that I thought was cool at the time. I had a portable amp and asked the owner if I could play.” Chaidez recorded the first Kitten EP when she was fifteen years old, and has toured with some very big names, including Charli XCX and Paramore. I ask her if people often just call her Kitten, like how they would with Blondie. She tells me: “Not as much as you’d think. Maybe it’s because it’s not what I want. I haven’t gotten that too much.”

For Cut It Out, Chaidez got painted all in gold makeup. I don’t recognize her, and ask her, “Is that you?” “That’s me. For that group of songs, I wanted to be painted gold. I had no reason for it. I just wanted to do it and see what happened,” Chaidez says. That works for me. Along the lines of gold, I want to know if she feels as if “Money” is a departure from her other songs? Where did it come from? “It was very much in the moment. My brother (Julian Chaidez) was home for Christmas from college, and he was making beats. We were listening to a lot of the same music. We made these tracks, and we thought, if we want people to hear them, we’d need to do them as Kitten.”

Another strong thing about Kitten is the band’s lyrics, always fitting with the music, whether it’s a dance song or not (I tried to kill you in my dreams, “Sugar”). It turns out Chaidez is a big reader: “I love Bukowski. F Scott Fitzgerald, Jack Kerouac. There’s a writer called Zadie Smith – she wrote White Teeth – one of my favorites of all time. Oh, and Kurt Vonnegut.”
~

Kitten headlines the Vera Project on Tuesday, July 22nd. Show is $12, all ages and doors are at 7 PM.