Beats Antique put a little of everything in their music and then mix it all up. Horns, drums, Eastern and Balkan influences, and sounds of the circus absorb into their sound like nothing else you’ve heard. And it is gorgeous. The Oakland, CA trio visits Seattle this Saturday, January 28th for an appearance at Showbox SoDo, promising dancing, electronic and just damn sweet music for your delight. Last year saw the release of Beats Antique album four, Elektrafone, which featured beauties such as “Cat Skillz” and a remix of The Glitch Mob’s “We Swarm.” I talked with Beats Antique’s Tommy “Sidecar” Cappel and David Satori yesterday about the circus (of course I had to ask!,) and those incredible masks, plus other topics. Read along. Lots to see here.

Tommy, I was reading that you had a marching band in Serbia?

Tommy “Sidecar” Cappel: Yeah, that’s my old band, Extra Action Marching Band. Me and Zoe [Jakes] were in that band together.

Did you bring inspiration from that into Beats Antique?

TSC: There’s a lot of inspiration going on all at once with Beats Antique. But definitely, that was one of them. I was there [in Serbia] on a music trip seeing brass bands [at] a gypsy brass band festival in the Balkan Mountains.

What are some brass instruments you both particularly like? I am guessing trumpet.

TSC: We’ve had a lot of trumpet. We have a baritone saxophone and clarinet on the road with us – a musician named Sylvain Carton.

Great! Are you bringing others with you?

TSC: We have another dancer with us named Auberon [Shull] and she’s doing performance art. 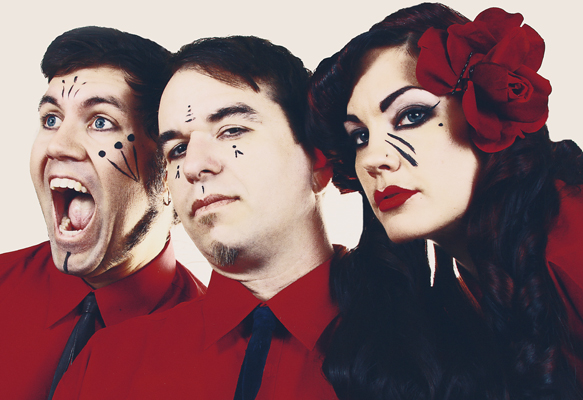 Who makes those animal masks you wear?

David Satori: People in China do. Those are masks that we order. We order these latex masks, but there are different masks we got from a prop shop that were handmade at a costume shop in East Bay over in Berkeley. We went to this costume shop that was going out of business and we bought these big crazy masks.

How did you decide who would wear the horse mask and the person mask?

TSC: It’s more like how you feel for the day when we first got them. But then it became, “who’s good at what character?” I was good as the grumpy old man.

DS: Tommy’s been a horse many times.

When you write songs, do you think about how they’d be live?

DS: We do it both ways. Now since we’re doing so many shows we do sometimes write based on how we think it’s going to sound live, and what’s going to be good for a show. On the other hand we still produce tracks without thinking about it all, and then we have to learn how to perform them, which is a good way to do it because you do things that you normally wouldn’t do if you were going to compose for a live show. You’d sit in a formula. When you make a track on the computer, you do all the things that you want to do, it’s sort of limitless. Then you have to figure out how to bring it to the stage. We go at it from both angles.

TSC: I personally like the dark. We have a lot of dramatic parts and Zoe’s dance is always amazing with lights around it and fog . . .

DS: You can definitely make it more magical, a more intimate experience. But when we’re playing on stages with a beautiful backdrop and the views are amazing – you really can’t complain.

DS: I’ve gone ten times. We’ve all been going over the past ten years.

If someone goes, what’s appealing about it?

TSC: There’s a sense of chaos that you’re not allowed to see during your normal life – not a scary chaos. It’s a fun chaos. It’s community-based. You can just walk up to anybody and start talking to them, and usually it’s nice. You can wander around and see amazing art all over the place.

DS: There’s a sense of freedom, a freedom of self-expression that you don’t see as much in the normal world. People go to their fullest form of self-expression. They don’t hold back at all. It’s a beautiful place for people to go and be weird.

There’s a lot of that cool gypsy circus sound in your music. American circuses are different, what did you like about the circus?

TSC: I used to go to the circus all the time. Both of my parents are musicians. They were really inspirational and always got me to be in the right place with music. One of the times I remember as a kid was when Ringling Brothers came into town, my mom got us seats – they weren’t like the best seats to see all the acts, but they were the seats that were right over the drummer. When I was like 5,6,7, I would just watch the drummer. I would get so excited about how the drummer would play to what the people were about to do. I could tell something big was going to happen because of the big role, and all of a sudden there would be boom! and some cool thing would happen. Or some elephants would walk out. Also [in] my high school marching band, our band director was really into the circus and he would have the circus come to our high school and do a whole performance. We got to watch them set up tents. To me it was a world that was really dreamy, free and fun.

Where did the song “Merry Go Round” come from? That voice is cool.

DS: That was actually before we went to Burning Man, the first time Beats Antique played Burning Man. I went down to The Tenderloin in San Francisco, and I interviewed some homeless people. A homeless guy started ranting, and that’s what I recorded.

DS:: Did you recognize the lyrics?

DS: After we made the song, I had no idea [what he was talking about]. I thought he was making up a poem. It turns out to be the verses of “Blinded by the Light” by Bruce Springsteen. I guess we have a Bruce Springsteen cover.

TSC: That’s a fun song. We should play that more.

How did you decide to remix “We Swarm” by The Glitch Mob?

TSC: They’re good friends of ours. We were coming down to LA to play a show, and they asked me to come into the studio and play some drum parts on songs. I ended up playing drums on the recording of that song. They were like, you should remix this one, because you played on it. We ended up doing that one because of that.

Has Zoe taught you any dancing?

Where did you meet the artist Michael Pukac. I love the work he’s done.

DS: We found him at a festival called Lightning in a Bottle. It’s a festival we’ve been playing for the last four years in LA. They have a huge element where they have art. A huge art show. I saw one of his pieces and introduced myself. He’s a fan of ours and happy to do it.

Tommy, did you introduce Zoe and David?

TSC: No. Me and Zoe were in the Extra Action Marching Band and then we were in Yard Dogs Roadshow together. Throughout that whole time me and David had a couple mutual friends. One of our mutual friends told us “you’ve gotta play music together.” We would jam here and there. The first time we played music together was for the burning man decompression party. David had put a band together and called me up. We played a lot of funk music, afrobeat, and just kind of jammed out. Through the years we became close friends. When Zoe got asked to do the album [with Miles Copeland] it seemed like a perfect fit.