Reykjavik Calling, now in its 5th year, returns to Neumos this Saturday, October 11th. The event is part of a broader cultural program by Iceland Naturally, which celebrates and promotes Icelandic art, music, food, and really – all things Icelandic.

The free show, featuring Icelanders Sin Fang, Sóley and Júníus Meyvant, will also have local artists such as Cataldo on the bill as a way of sharing some love between Seattle and its Icelandic sister city, Reykjavik. Get there early – this show will reach venue capacity very quickly.

Other events happening this month include a special Icelandic menu at the Dahlia Lounge from October 9th through the 12th, and an Icelandic art exhibit called Odin’s Eye (because you know, the god Odin gave up one of his eyes in return for wisdom!) focussing on Norse Mythology at the Nordic Heritage Museum.

Learn more about these events – and others during the Taste of Iceland – over at Iceland Naturally’s programming page. 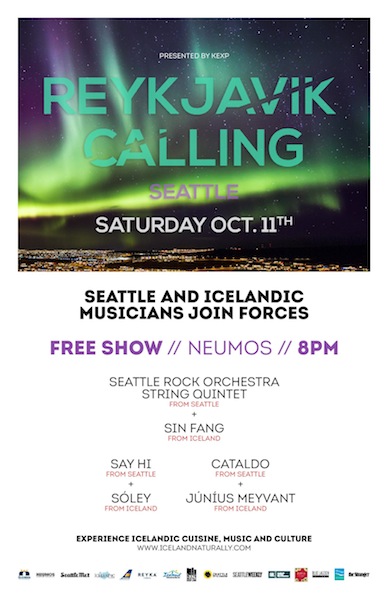