Buddy – Last Call for the Quiet Life
by Ira Leonard 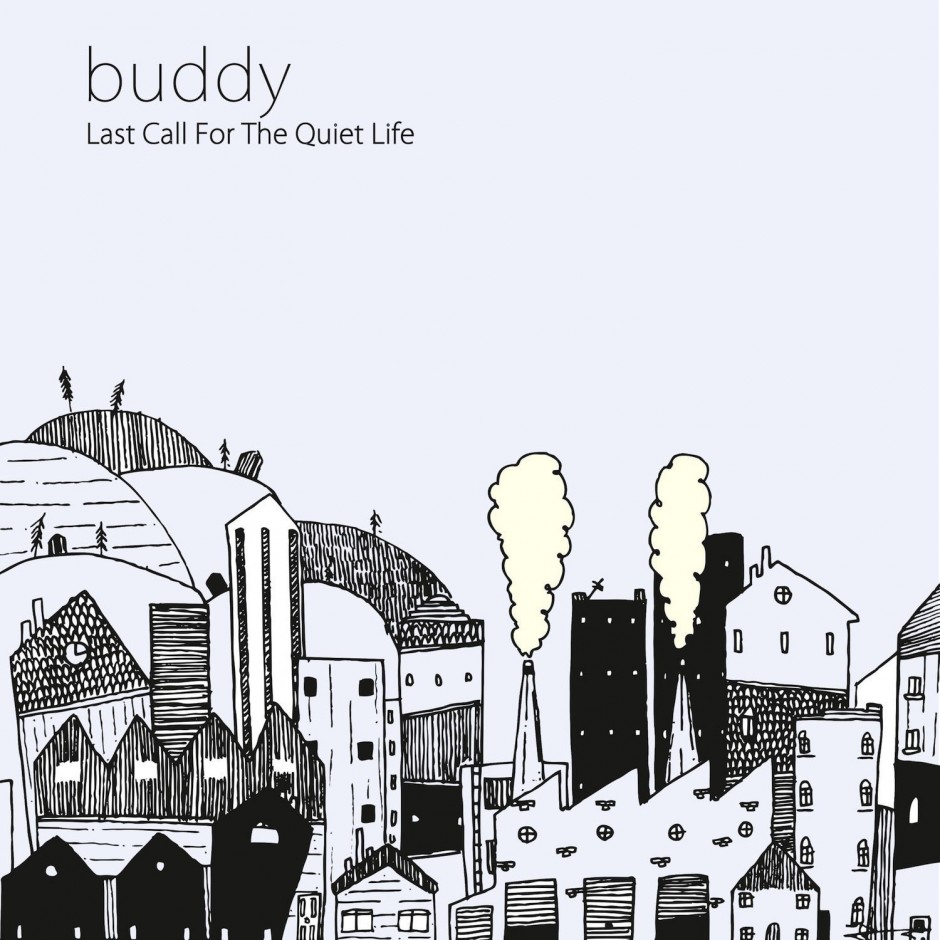 Sometimes it takes a band a few tries to figure out exactly what kind of album they want to make. And sometimes they need to give themselves a “mulligan” album in the process. Such was the case for the Los Angeles-based (yet Portland born) band Buddy. Less a band in the conventional sense than a songwriting collective led by a singer-songwriter of the same name, Last Call for the Quiet Life is the first full-length album from the project since 2007’s largely acoustic Alterations and Repairs. As previously alluded to, a sophomore effort was recorded in 2009, but Buddy was unsatisfied with the results and the album was ultimately tabled, although five tracks from it were released as Campfire EP. While it is anyone’s guess what the rest of that release might have sounded like, Last Call for the Quiet Life was well worth the wait for stalwart fans of acoustic-based Pacific Northwest indie rock.

From the opening chords of “Weak Currents,” the album’s first single, the hand of Phil Ek is immediately evident. Ek, who mixed the album, is best known for his work with acts such as Band of Horses, Built to Spill, and the Shins, all of which Buddy’s sound could easily be likened to. The juxtaposition of the simple acoustic guitar part with the distant, kaleidoscopic, feedback provides a lush soundscape that is the perfect bed for the pretty vocal melody to lie upon. On this song and throughout the album, the backing vocal harmonies (at times augmented by guest artists Michelle Branch, Cary Brothers and Holly Conlan) steal the show, betraying a bit of Crosby, Stills, and Nash by way of the Fleet Foxes (another Ek pet project). This song is followed by “Slow Light Down,” which, though it never strays far from Indie rock orthodoxy in terms of its chord progression and melody, does make memorable use of overlapping background vocals, haunting guitar trills, and one of the standout lyrics on the entire album: “Despite what they say it isn’t love if you’re not ashamed.”

Buddy has self-deprecatingly described his sound as “wimpy core.” Whether or not that is necessarily an accurate assessment of his musical style, it is fair to say that he is most at home in the context of a ballad. Nowhere on Last Call for the Quiet Life is this more apparent than on the stirring “Boxing Elbows,” on which Buddy jettisons the acoustic guitar in favor of piano peppered with an occasional flourish of Eleanor Rigby-esque strings. A few tracks later, “Behind It (Bad Advice)” sees the album’s first (and probably most successful) foray into electronic dance elements and demonstrates that the band is unafraid to experiment a bit. One of the most noteworthy moments on the back half of the record is the tune “Stare Too Long,” which evokes the dreampop sound popularized by bands such as Beach House, and contains a lyrical gem that will elicit an “Amen” from anyone who has ever been told to smile by a stranger on the street: “Nobody cheers up when told to.” Last Call closes with “Scrap Metal,” which creates a hypnotic atmosphere through the use of creative panning techniques on the opening organ and percussion. This is one of those recording moments that must be listened to through headphones to appreciate the full effect. As the piece unfolds, the synths and vocals combine to paint a sound mural that is at once colorful and somber. If asked to describe Buddy’s music using only two words, “colorful” and “somber” would be two very likely contenders.