In the mid-nineties there existed a short period of time where great rock bands hit it big with novelty songs. At the time these novelty songs raised the question of whether the bands would be remembered past tomorrow or whether they would be relegated to one-hit wonder status. “Not If You Were the Last Junkie on Earth” by the Dandy Warhols is probably the best example. It was actually taken from their second album, The Dandy Warhols Come Down.

Fortunately the Dandy Warhols, with their psychedelic tinged, Velvet Underground influenced rock and roll, thrived. They released album after solid album and their songwriting seemed to strengthen with each album. Fifteen years later, they’re better than ever. On Friday Courtney Taylor-Taylor and company played the Showbox in support of their retrospective release, The Capitol Years 1995-2007.

A Dandy Warhols show is made for a venue like the Showbox. Their sound filled the room effortlessly and the bohemians, out in full force, were dancing throughout the entire set. The set was a “greatest hits” set in a sense. The Dandys reached far into their back catalog, playing a spirited version of “Lou Weed.” The crowd danced and clapped along to “Not If You Were the Last Junkie on Earth” as Zia McCabe rocked the tambourine.

The majority of the set came from the Dandys’ next two releases. “Thirteen Tales” from Urban Bohemia was represented well with “Godless,” “Get Off,” “Horse Pills” and “Bohemian Like You,” their biggest hit. “Solid,” the song that served as the theme to Undeclared, Judd Apatow’s ill-fated show about college, received a warm welcome as well. “We Used to Be Friends” was another high-energy highlight. The Dandy Warhols sounded great all night. McCabe and Taylor-Taylor routinely addressed the audience, keeping us engaged between songs.

Unfortunately they failed to play “All the Money or the Simple Life Honey” and “Every Day Should Be A Holiday.” Despite these omissions the Dandys couldn’t have put on a better show. As good as their set at Bumbershoot was earlier this year, this show was better. The Dandys are best as a small venue/club act and at the Showbox they proved it once again. 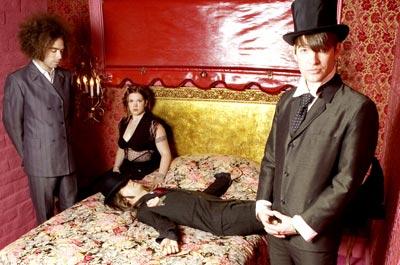 The Dandy Warhols – photo courtesy of their MySpace