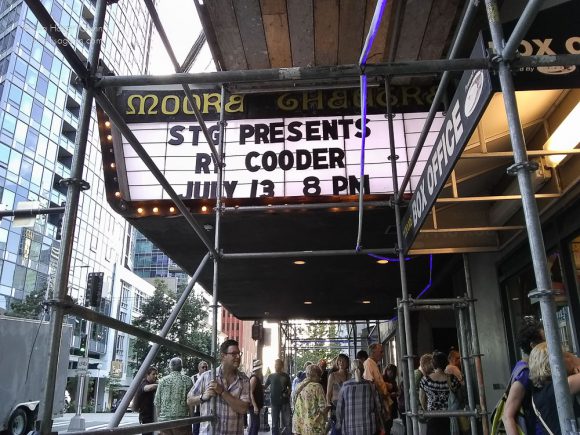 Renowned guitarist–vocalist Ry Cooder rarely tours these days, but he packed both balconies of Seattle’s Moore Theatre on July 13th.

At age 71, Cooder is eclectic and unpretentious in his personal style: thick-rimmed glasses, brightly colored skinny tie, and blue ski cap atop white ponytail. On his left pinky finger he wore a reflective slide. The guitarist re-tuned constantly, remarking that his instrument was, “only a Fender, not a Steinway, for Chrissake.”

Cooder opened with the Blind Willie Johnson classic, “Nobody’s Fault but Mine,” which showcased Cooder’s signature sound of warbling blues guitar and rich vocal vibrato. He then announced that he had, “Some tunes for you. Got some old ones, got some new ones.” True to his word, Cooder played a mix during the 15-song set.

He then brought up his band—his son Joachim Cooder on drums, Sam Gendel on saxophones, and Robert Francis on electric bass—backed on vocals by The Hamiltones, a finely tuned gospel and R&B group out of North Carolina. They joined Cooder for all but two numbers.

Perhaps most powerful were Cooder’s introspective and politically messaged solo tunes. A compelling storyteller, Cooder paused to share about the 1930s backdrop of labor unrest and the “stomping” of fascism that had inspired Woody Guthrie’s music, before breaking into characteristic slide guitar for Guthrie’s “Vigilante Man.” Cooder added a poignant verse to memorialize Trayvon Martin that choked up the audience audibly. Following was Cooder’s new acoustic tribute to Guthrie, “Jesus and Woody,” with the provocative and timely line, “Guess I like sinners better than fascists/And that makes me a dreamer, too.”

Just before the encore, Cooder reminisced about his fourth-grade existence, which had been “bleak and endless” until he received his first radio and found Los Angeles blues station KGFT. “It saved me,” said Cooder, “I knew then that I wanted to play, record, and tell stories.” He continued with a quirky story about meeting Johnny Cash, before jumping into Cash’s “Get Rhythm.”

The crowd was seemingly full of admiring long-term fans familiar with Cooder’s music. A feminine voice screamed “I love you, Ry,” and a masculine voice added, “I do, too,” prompting cheering and applause. Cooder received two standing ovations. The audience was surprisingly compliant with the artist’s no-photo policy for the tour.

Joachim Cooder opened the evening with a short set of “Because the Moonlight,” “Strange Love,” “Everyone Sleeps in the Light,” and “Fuchsia Machu Picchu.” The younger Cooder laid eccentric vocals atop live-sampled guitar, Array mbira, and brushed cajón. He was joined by experimental musician Sam Gendel on breathy effects-processed saxophone that was almost mistakable for organ. The duo built up tunes an element at a time, looping and layering into a plinky psychedelic rhythm.