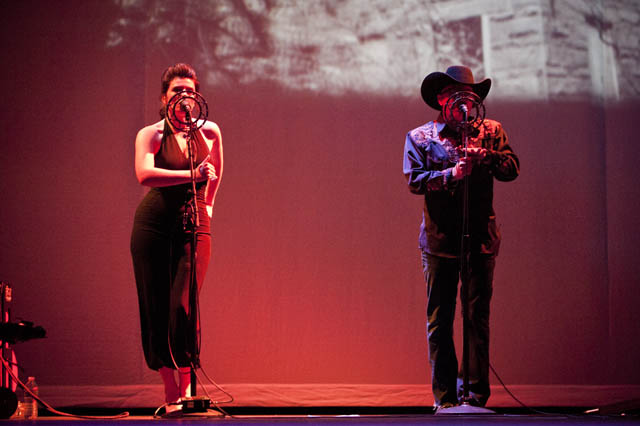 Maynard James Keenan, best known for his work with bands Tool and A Perfect Circle, is back on tour, performing in his side project known as Puscifer.  On November 7, Puscifer made its second performance in two years at The Paramount Theater before an audience of fans who were sitting on the edge of their seats to see what Keenan had up his sleeve.  In typical Tool and A Perfect Circle fashion, photography from the audience was strictly forbidden, and ushers patrolled regularly, sometimes interrupting the show by shining their flashlights into the audience.

This experimental band is more like a personal exploration project to Keenan, who uses his creativity to weld a live performance that makes use of not only music, but comedy and technology as well. The show was a spectacle that combined live music with short video skits featuring Laura Milligan of Mr. Show, and variable monologues by Keenan. He made full use of his peculiar on-stage setup, which included an Airstream trailer and mock campsite complete with folding chairs and a BBQ grill, with a large video screen behind it.  Much of the live music featuring songs off Puscifer’s latest release, Conditions of My Parole, which the audience seemed to know as they sang along to certain songs.

Puscifer is touring North America for the remainder of the year.  Check out photos below to recap their eve