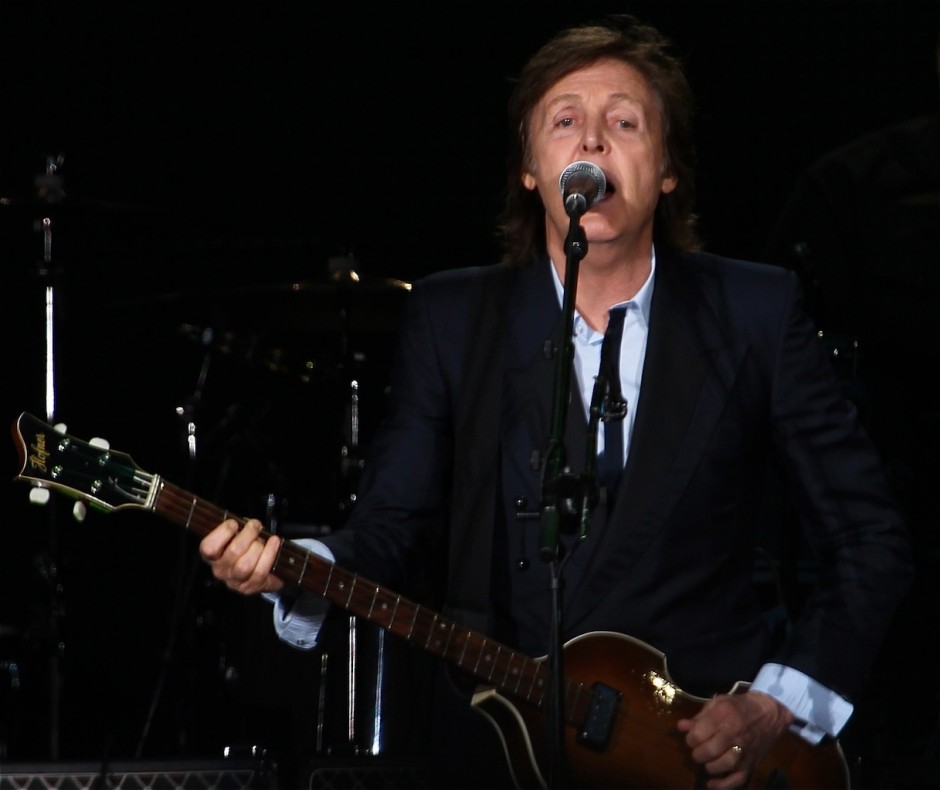 Who’s your favorite Beatle? Last Friday evening Paul was Seattle’s favorite Beatle, as Paul McCartney descended on Safeco Field, performing the first massive rock show the baseball stadium has seen. Excitement was raging, and then seemed to hit an even more frenzied pitch when the Beatles’ cover of “Bésame Mucho” piped out of the speakers. Photos of the Beatles and McCartney popped up on the jumbotrons. People froze for a second; then began the next level of ecstatic expectation. If any artist can play his own music as intro to a show, it’s Paul McCartney. Covers of Beatles’ and McCartney’s songs by other artists and remixes played for approximately half an hour until McCartney, in a sharp dark navy frock coat and Beatle boots, hit the stage covered by a huge, and bright spotlight.

In a tour that’s aptly called Out There – it’s an extraordinary out of this world show – McCartney showed that he indeed have a charisma that can reach thousands. In this case it reached 45,000. Though the set list included many Beatles and Wings songs, McCartney’s not living in the past. The songs just exist in a timeless manner. Several Beatles songs we never got to hear live because the Beatles broke up before they could perform them live. The band’s death was untimely and unfair, yet what they gave us was music that became a huge part of our lives. And people who don’t like any songs by the Beatles worry me. These people must lack a certain capacity for emotions; I feel kind of sorry for them. I figure they’ll come around at some point. And, you know, I’m not just a fan – I’m an acolyte.

I spent two hours in traffic to reach this show, one I was not going to miss. My world has always had the Beatles, and McCartney in it, and for that I am grateful. So, despite at one moment considering ditching the car and joining the throngs of people on foot heading to the stadium, I held in there and made my destination (in “seconds flat” – apologies, I couldn’t resist). 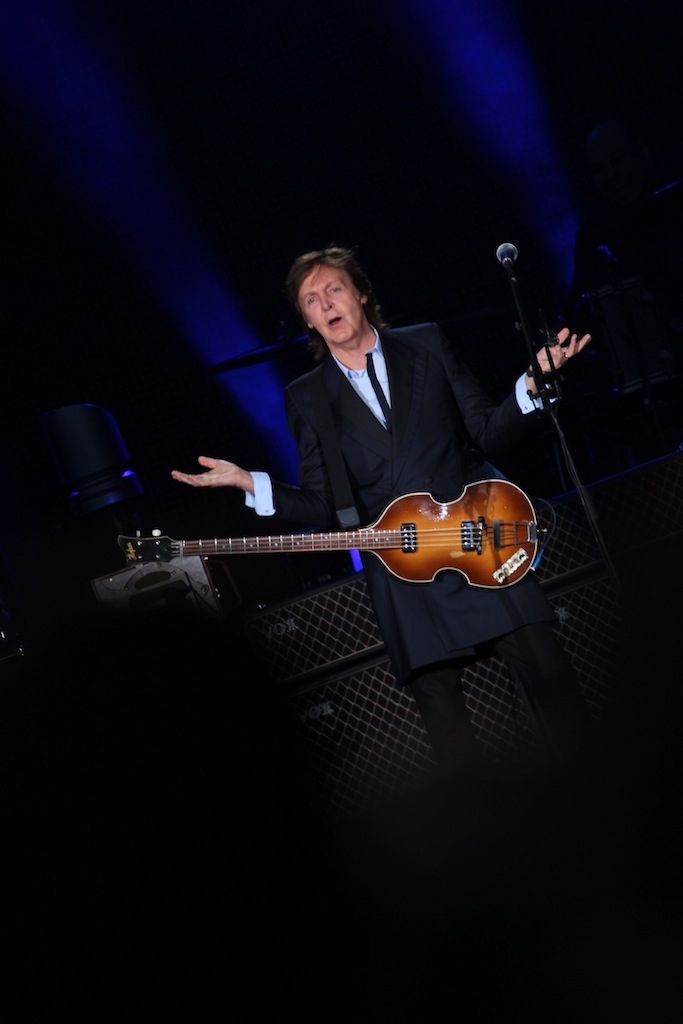 You probably know part of the Beatles’ story. After several years of hard toil in the mean streets of Liverpool and Hamburg, by the time they made it big in the U.K. they had really earned their stripes. They were tough, leather-clad, drugging and drinking lads transformed into suit-wearing and tidy young men. McCartney’s got nearly one billion dollars now, and he deserves every penny for becoming one of the most important composers the world has ever seen. He doesn’t need to tour. He could easily just stay home. But he doesn’t, he shares his music because he wants to. He enjoys playing music. I don’t think that has ever changed, or will change. And McCartney’s still willing to share the stage with other musicians with a fan’s excitement. Proof of that?: Inviting members of Nirvana and Foo Fighters to jam with him at Safeco Field. Dave Grohl, Krist Novoselic and Pat Smear joined him for several songs, including the excellent track “Cut Me Some Slack,” written by McCartney, Grohl and Novoselic, a song McCartney said he didn’t realize would kind of be a Nirvana reunion.

Through numerous bass changes – the first bass was the iconic Höfner – and piano playing, plus guitar playing, McCartney played a wonderful set of songs. Some you’d expect and demand: “Yesterday,” “The Long and Winding Road,” and “All My Loving.” There were some surprising picks: “Paperback Writer,” “Blackbird,” “Lady Madonna” and “Eight Days a Week” among them. Also surprising was Magical Mystery Tour‘s “Your Mother Should Know,” and Sgt. Pepper’s Lonely Hearts Club Band‘s “Lovely Rita” (complete with groans at end) and John Lennon’s “Being for the Benefit of Mr. Kite!”. McCartney also covered fellow Beatle George Harrison’s song “Something.” The song “Here Today,” which McCartney wrote after Lennon’s murder, was a poignant moment. McCartney told audience members to tell loved ones how they feel, as they may not have the opportunity to if they wait. I think it was actually during this song when I saw two seagulls flying side by side over the field. “And I Love Her,” whose segment in the film A Hard Day’s Night is one of cinema’s most enduring moments, was beautiful.

McCartney’s and the Beatles’ influence has kept its momentum. When introducing “Back in the U.S.S.R.,” McCartney mentioned the time he met officials in Russia who told him they learned English from Beatles records. The audience, made up of people of all ages, proved that the music still sparks imaginations. “Helter Skelter,” which I am going to throw out there as the first real grunge song before they knew what to call it, was like a musical, beautiful tornado. McCartney’s voice was superb. I won’t go into his age and how he’s been able to hold onto that voice. It’s just some kind of supernatural thing, along with his songwriting, that’s been gifted to the universe.

“Live and Let Die,” the titan of a rock James Bond theme song, tore up the event with fireworks next to the stage and huge pyrotechnic explosions in the front. McCartney closed the show with most of Abbey Road‘s ending: “Golden Slumbers,” “Carry that Weight” and “The End.” When McCartney held his bass aloft and pointed to it, you could feel a beautiful connection between the instrument and man. His bass playing – unique and creative – always inspires. Also, just an aside, McCartney is quite the cheeky dancer. 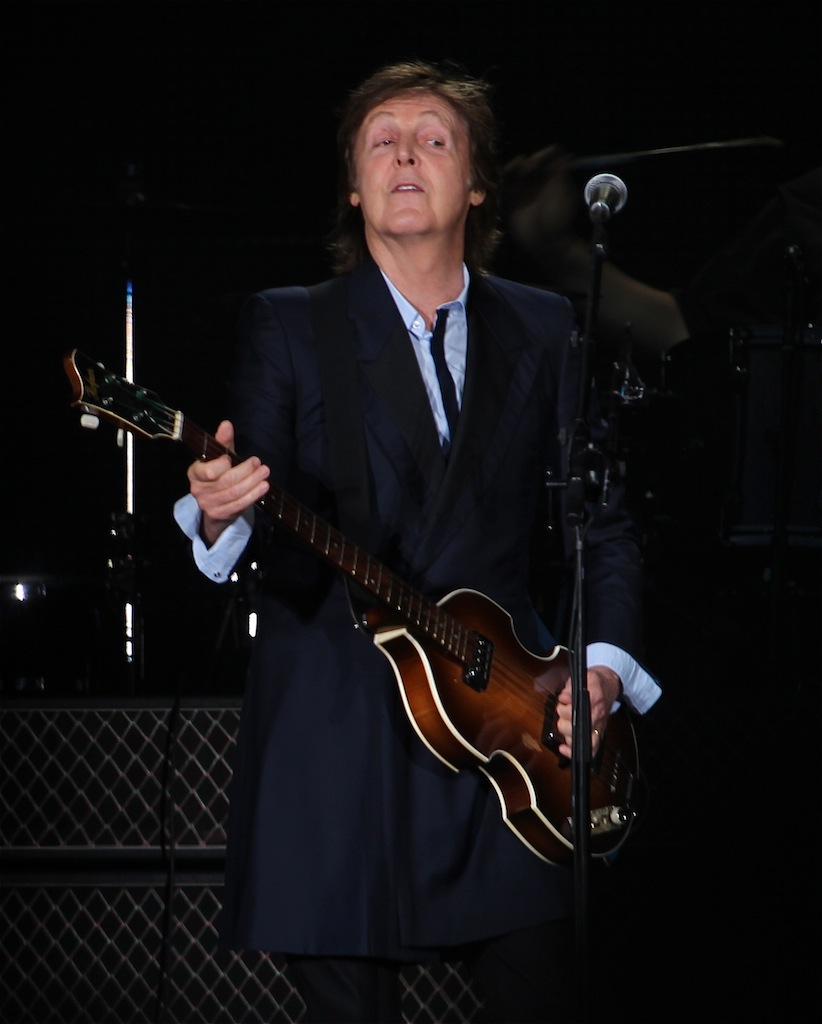 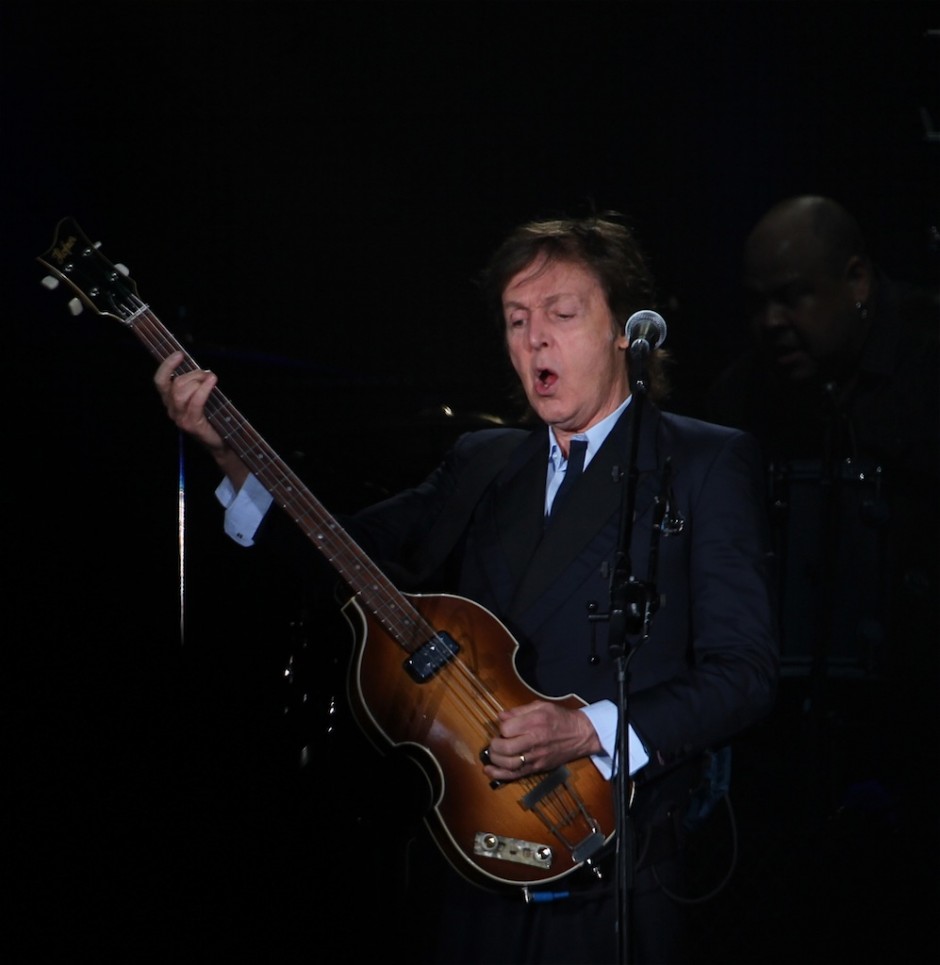 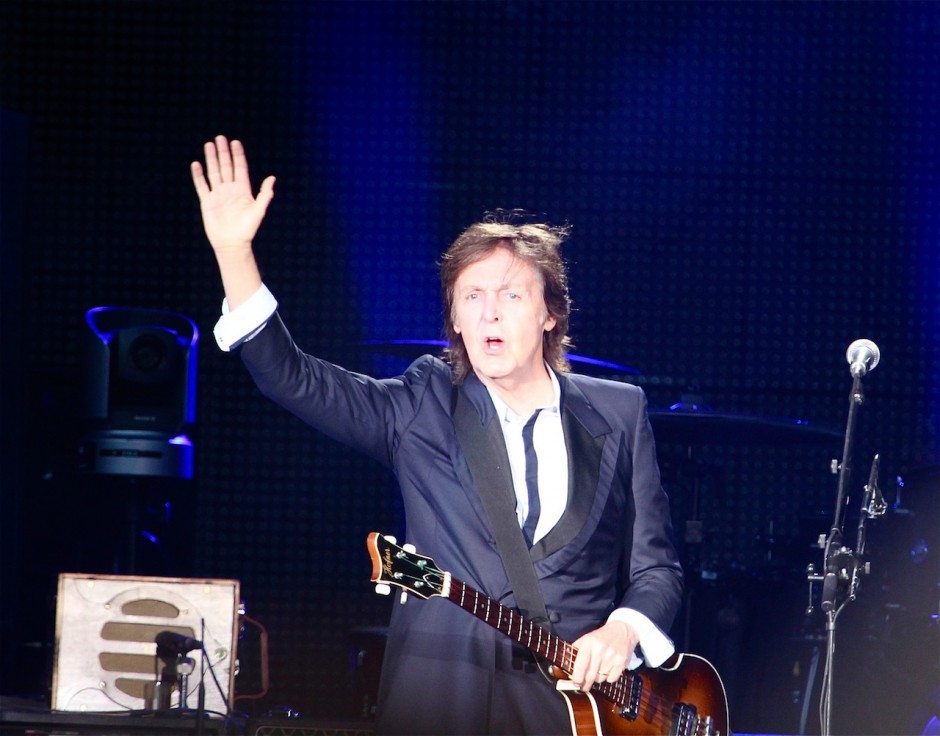 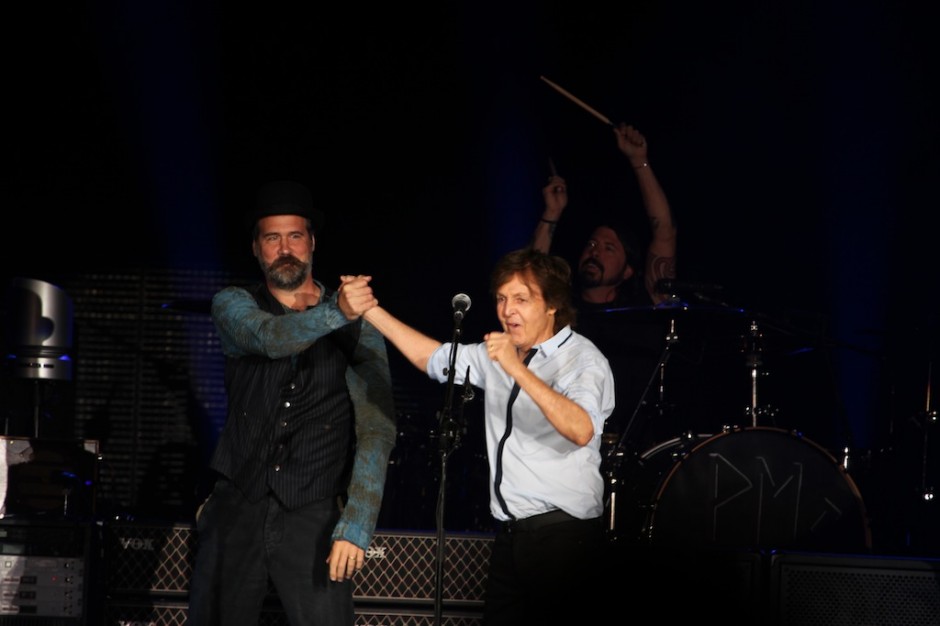 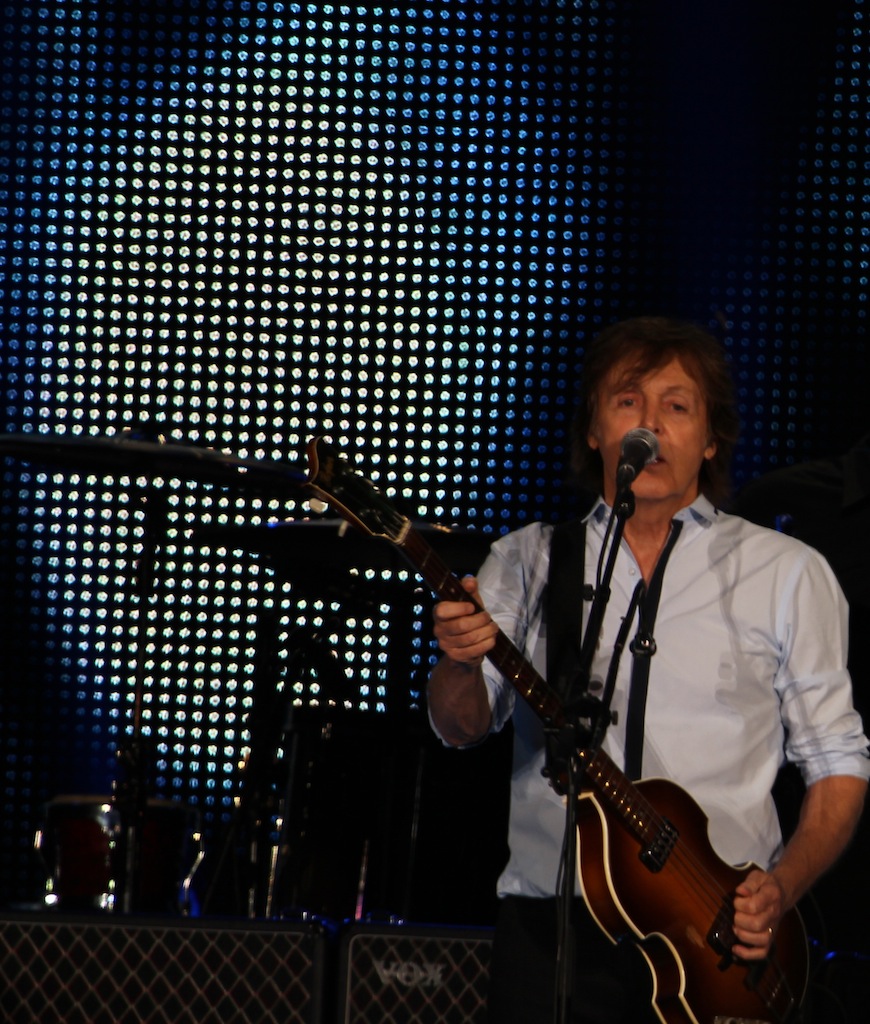 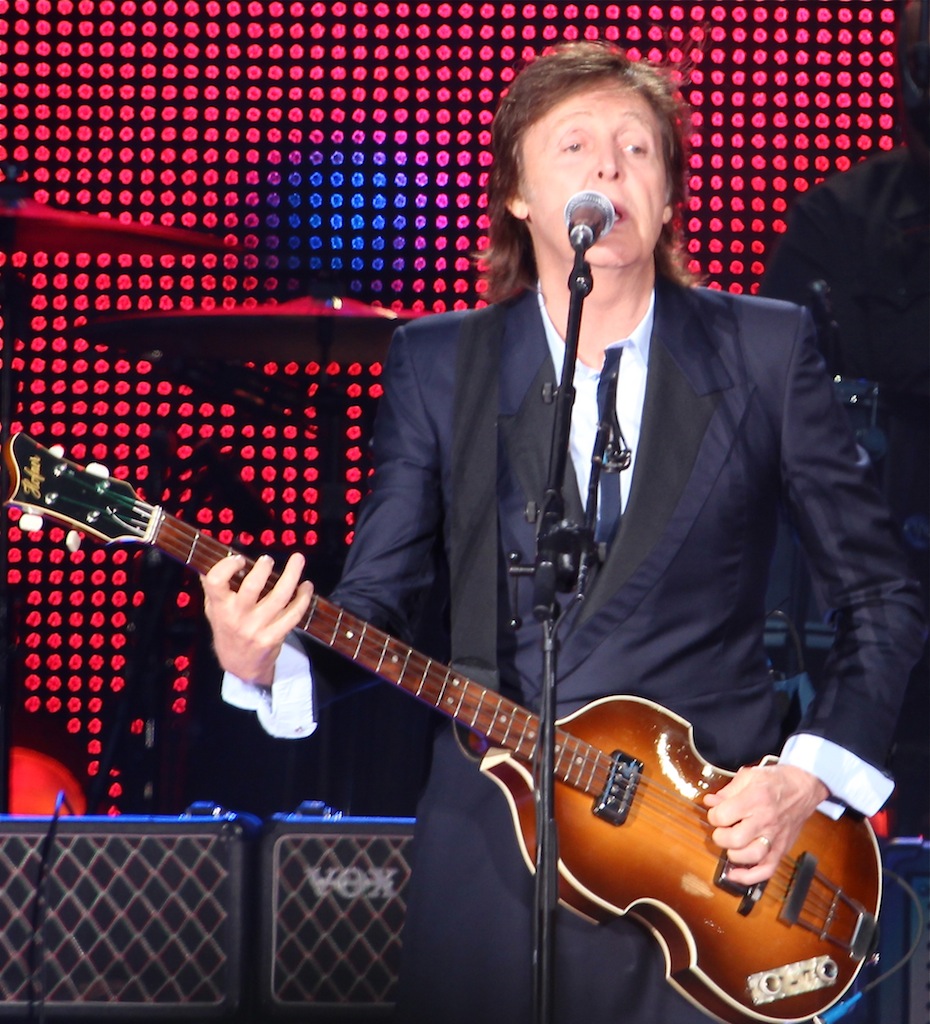 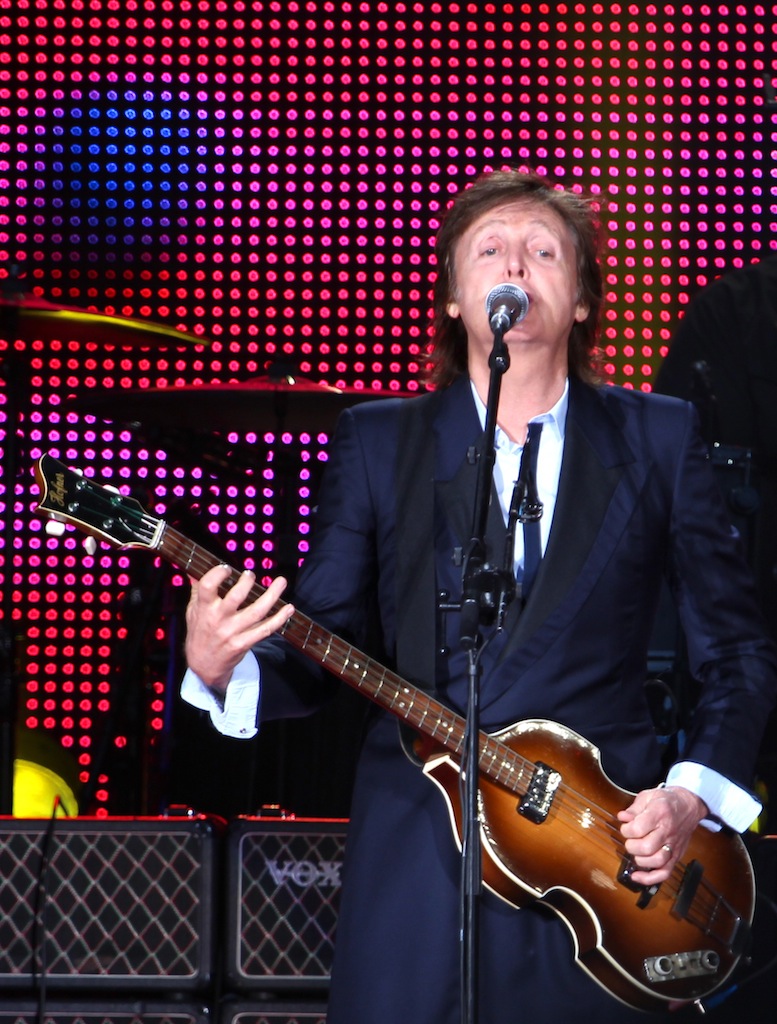 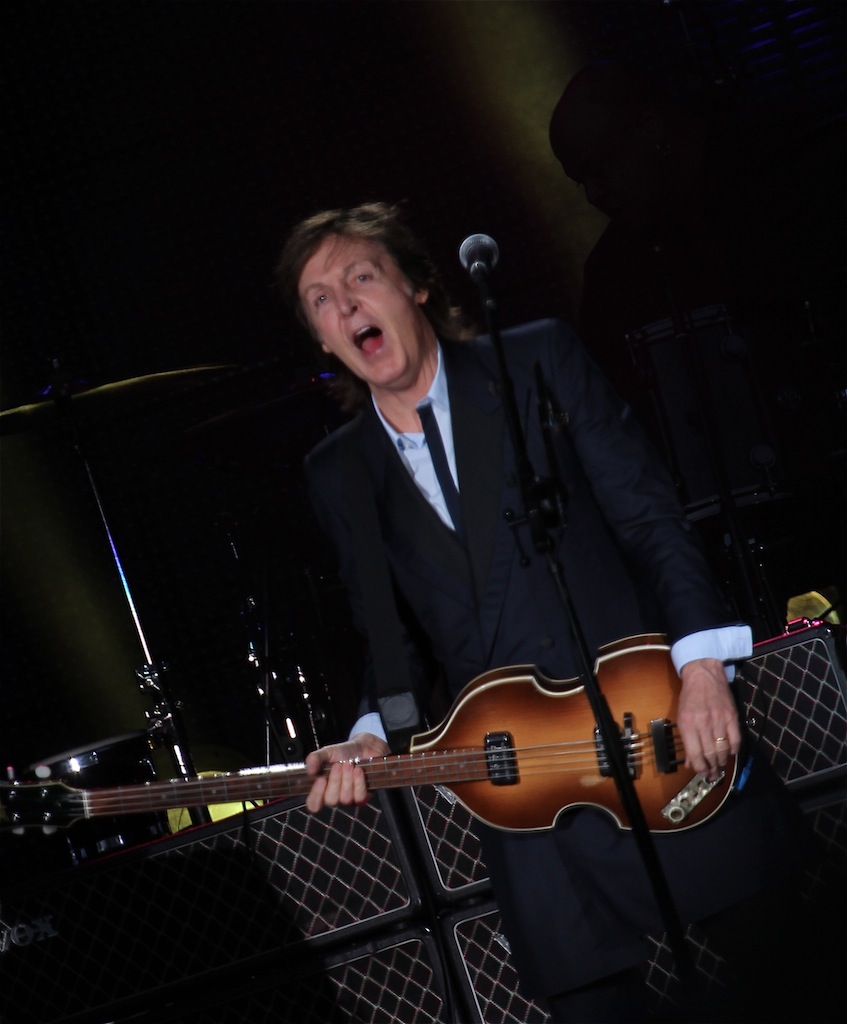 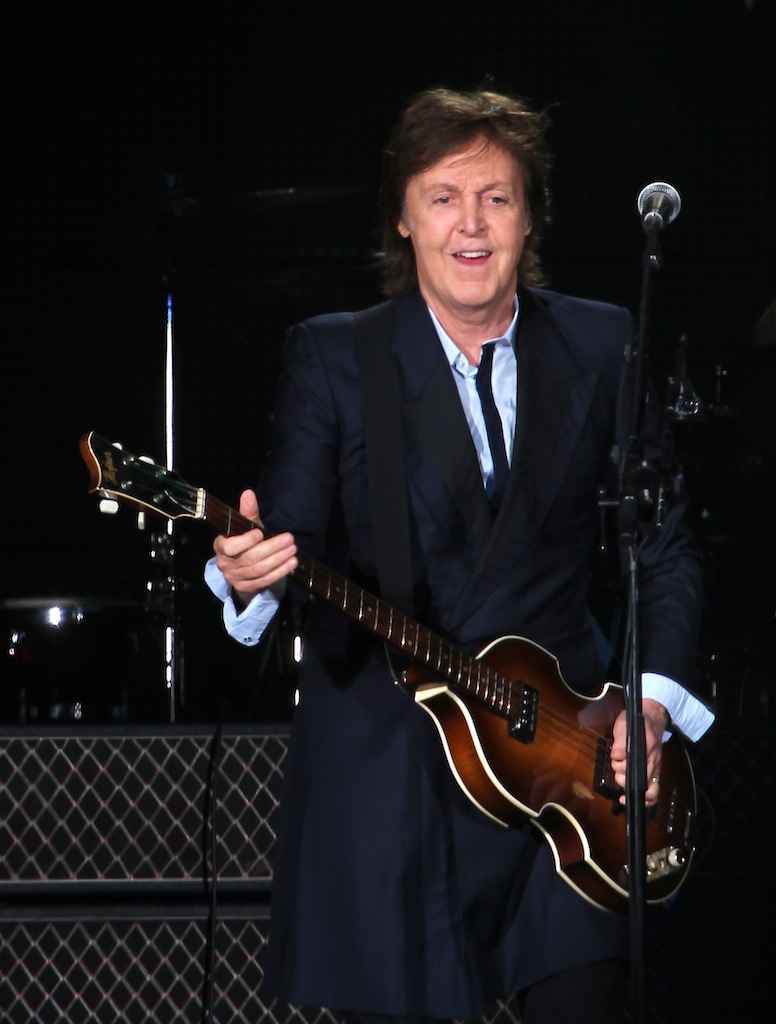 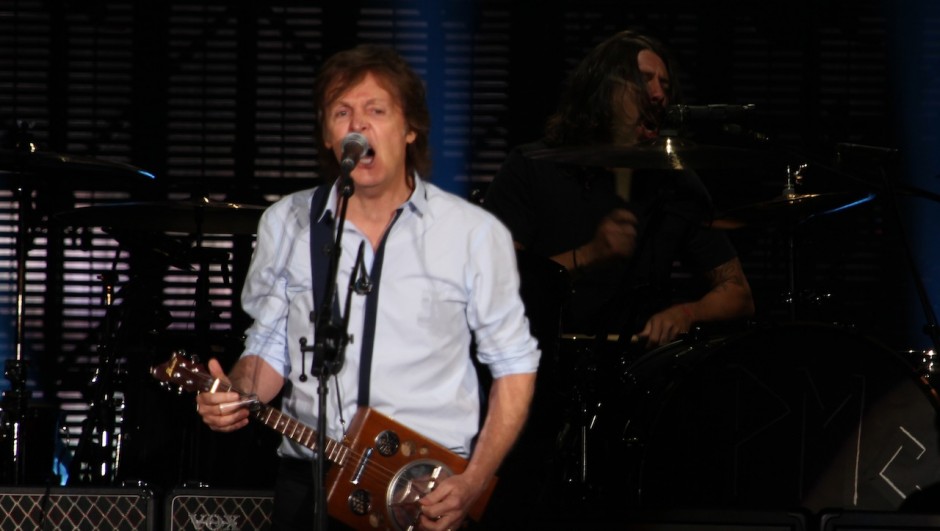 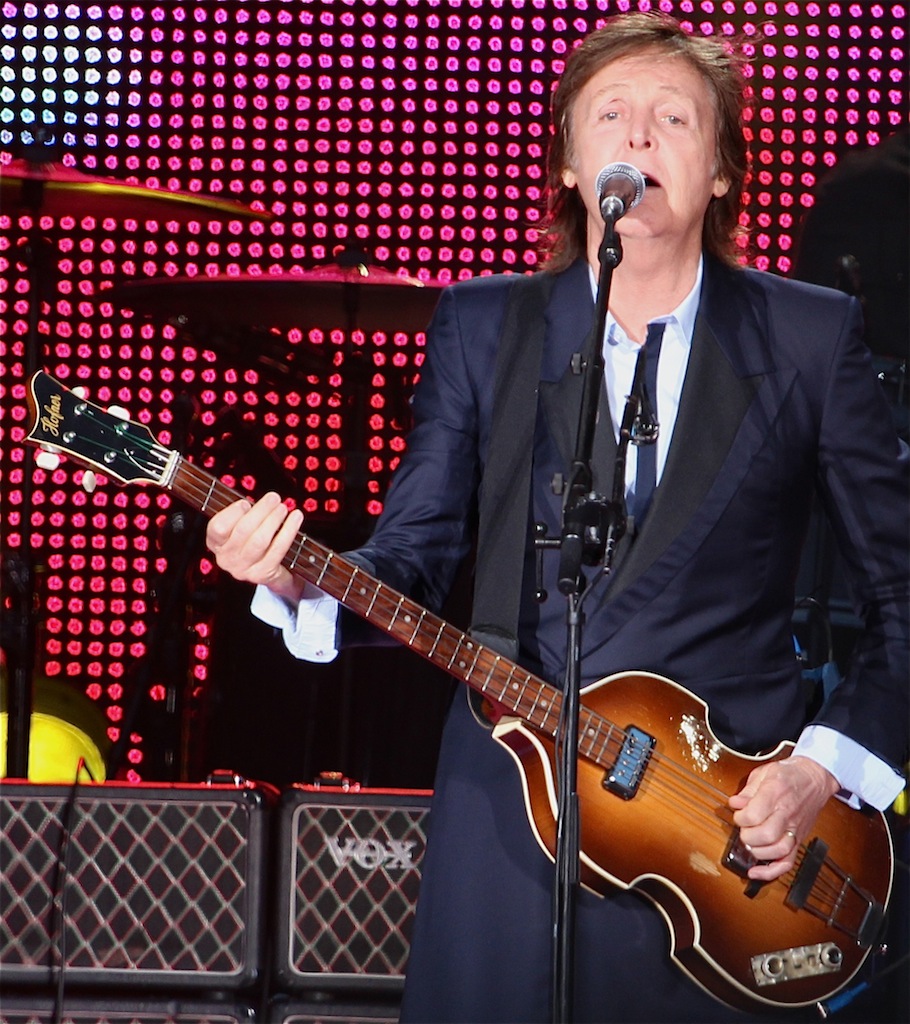 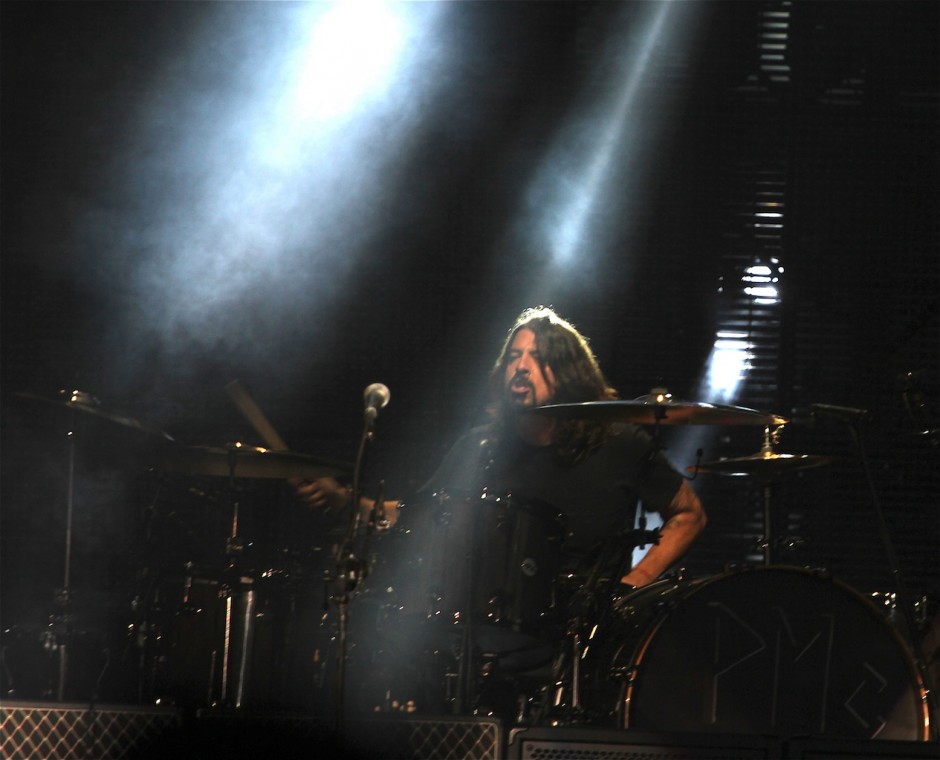 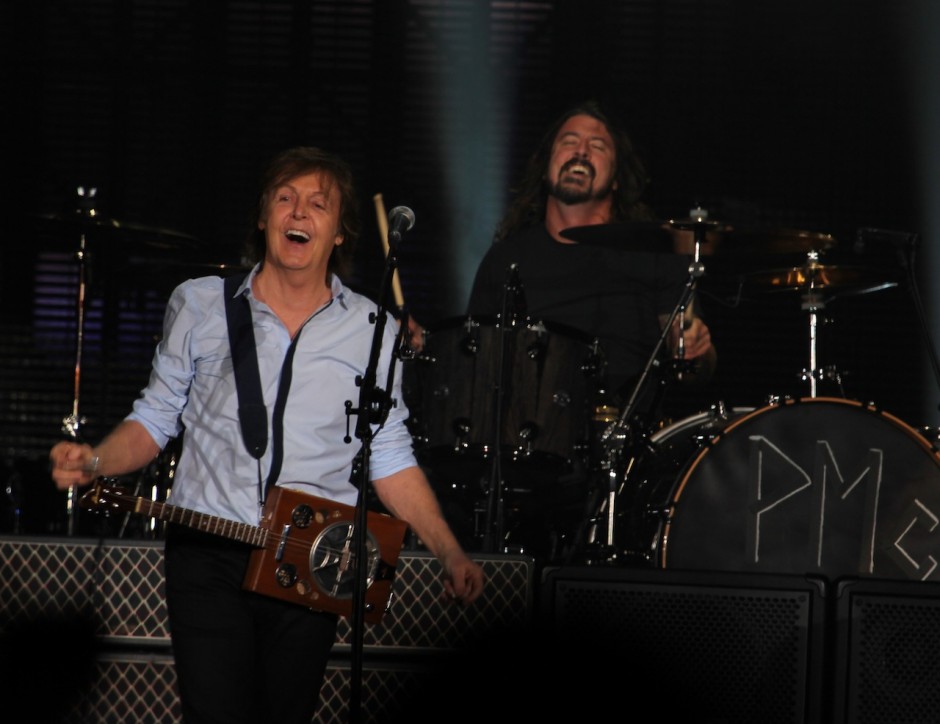 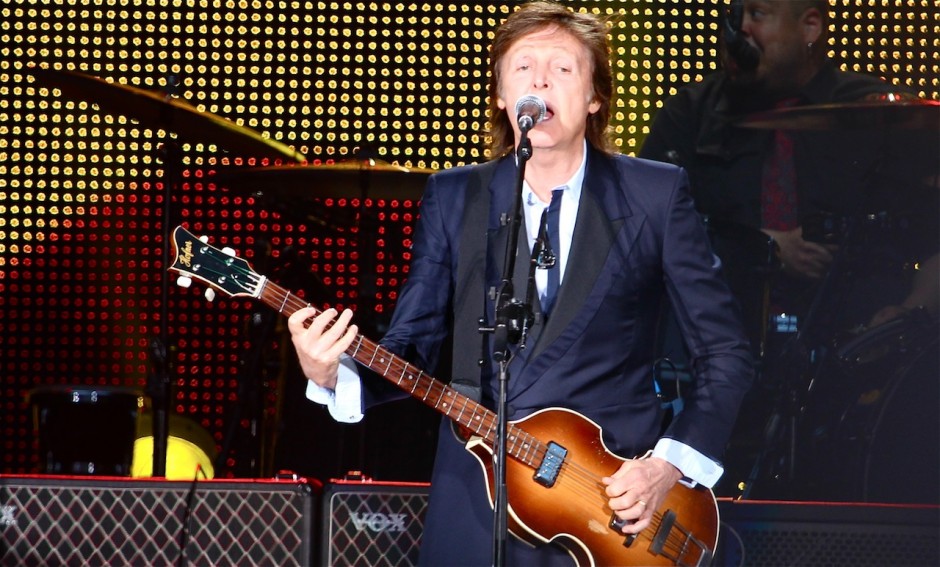 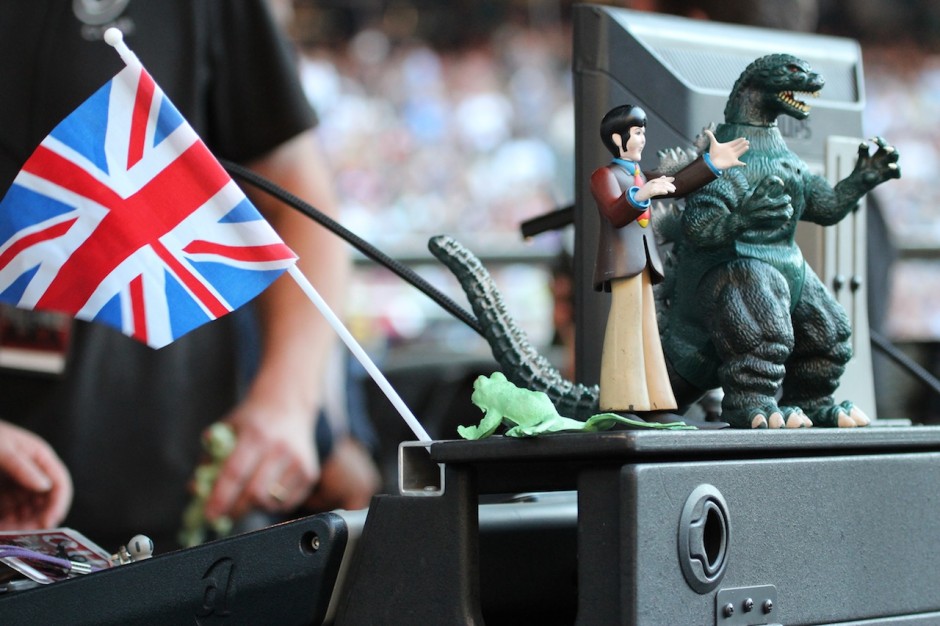 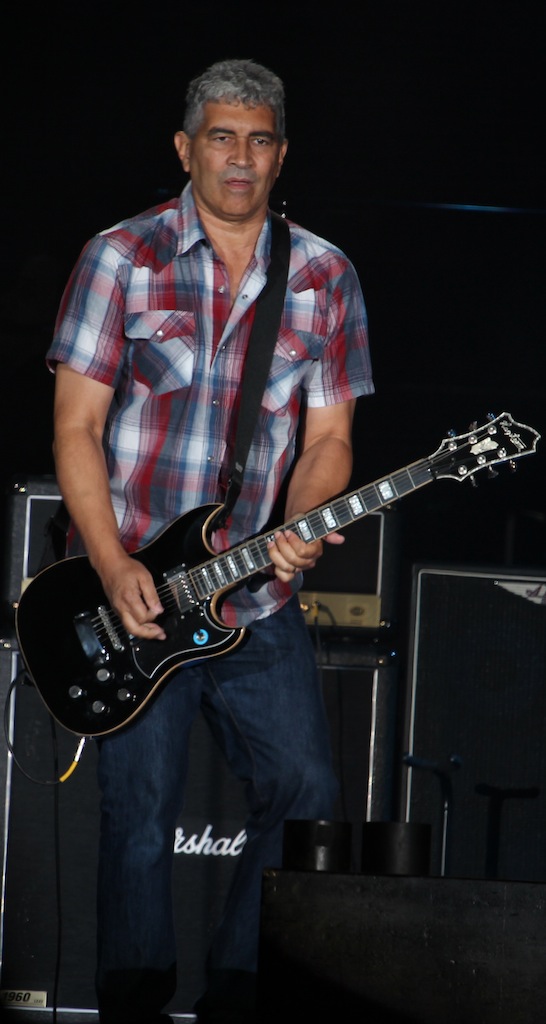 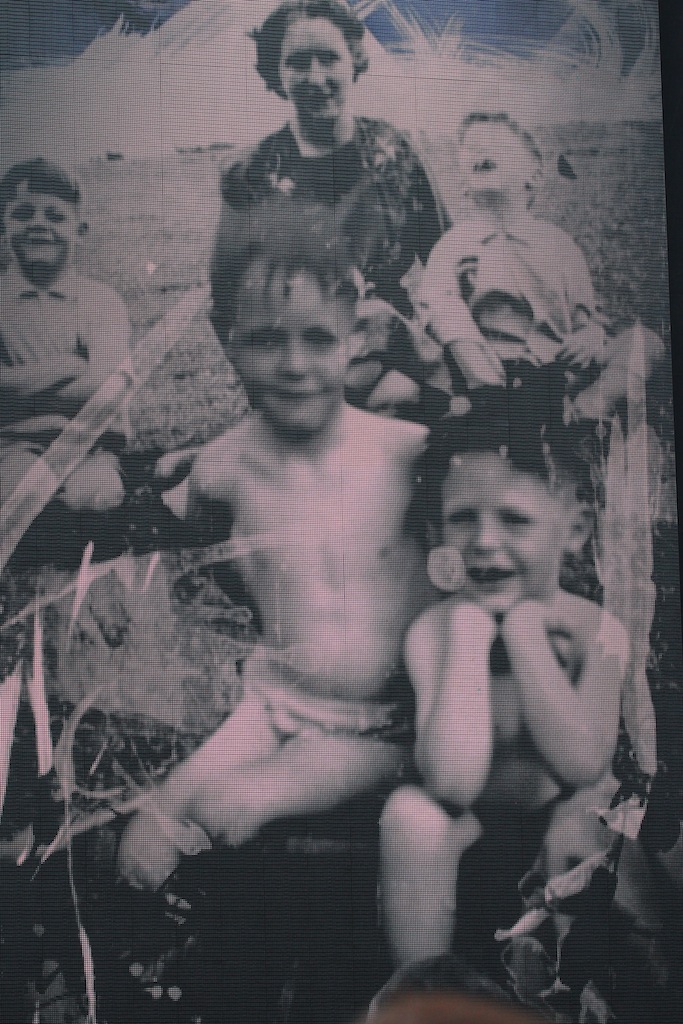 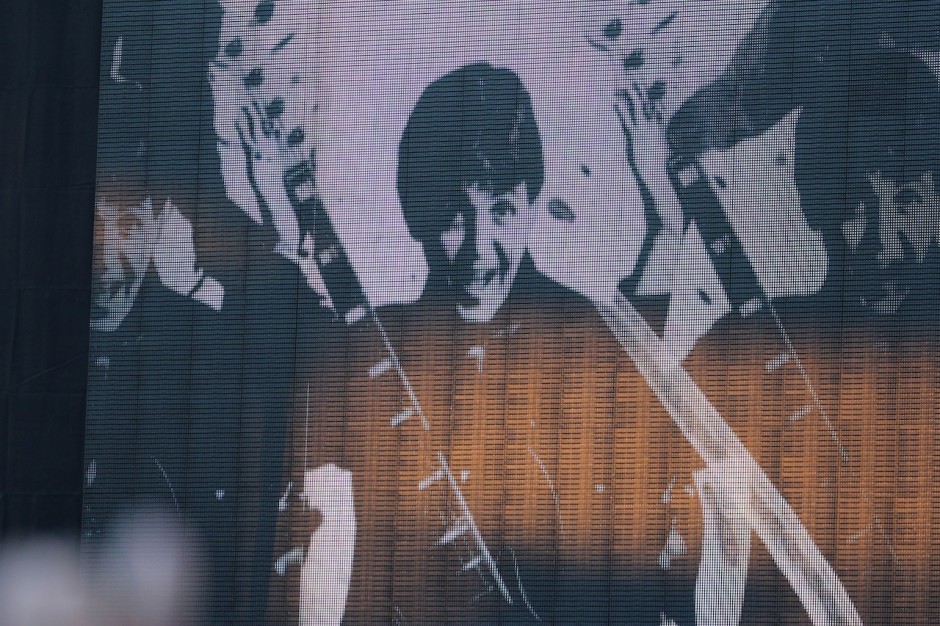 Eight Days a Week
Junior’s Farm
All My Loving
Listen to What the Man Said
Let Me Roll It
Paperback Writer
My Valentine
Nineteen Hundred and Eighty-Five
The Long and Winding Road
Maybe I’m Amazed
I’ve Just Seen a Face
We Can Work It Out
Another Day
And I Love Her
Blackbird
Here Today
Your Mother Should Know
Lady Madonna
All Together Now
Lovely Rita
Mrs. Vandebilt
Eleanor Rigby
Being for the Benefit of Mr. Kite!
Something
Ob-La-Di, Ob-La-Da
Band on the Run
Back in the U.S.S.R.
Let It Be
Live and Let Die
Hey Jude