“Underpromise and over-deliver” is a motto for service providers, not the kind of sentiment an artist should use. John Carpenter is not your typical artist. He may be the least pretentious man in show business, a director and musician who has compared his own film scores to well-laid carpet: “I think of the orchestral stuff as ‘carpet’ music – I lay a ‘carpet’ under the scenes – it doesn’t get in the way, and you’re watching the scene and the music won’t intrude on you.”

A young Carpenter once had dreams of being a rock and roll star; they went kaput. Then he had dreams of being a great director and even got halfway there, battling studios and box office expectations to put singular visions on screen. By his own account, those battles have taken a huge toll on him – Carpenter hasn’t made a film in several years and has said more than once that he may not make another one. But at 68, Carpenter has just released his second non-soundtrack album in as many years (Lost Themes II), he’s touring the US, and he’s performing his themes – in front of screens playing scenes from his movies – to his rabid and loyal fan base. John Carpenter may have actually won his war of attrition, and this is his victory lap.

On June 14th, Carpenter and his carpet-laying crew (a full band of guys that look maybe half his age) set up shop in the Paramount. The director wore black jeans, a black T-shirt and an open black buttoned shirt over it. He chomped on bubble gum and shoved his left hand in his pocket as he ran through some of his simpler synth lines on his keyboard. When Carpenter spoke, it was in short, explanatory bursts that he appeared to be reading off sheets on a music stand: “Now we’re going to play a song off of Lost Themes I, and it’s called “Vortex.” Not exactly a showcase in witty stage banter, but what you might expect from John Carpenter: the man deflecting the attention and spotlight away from himself and on to his films and music, where the real mystery lies.

Carpenter has done this so well over his career that you may be a fan of his films and not even know it. You can easily forget the depth and varied nature of Carpenter’s creations, forget all the nooks and crannies his work has crept into, forget how he has influenced pop culture while taking almost no part in it. 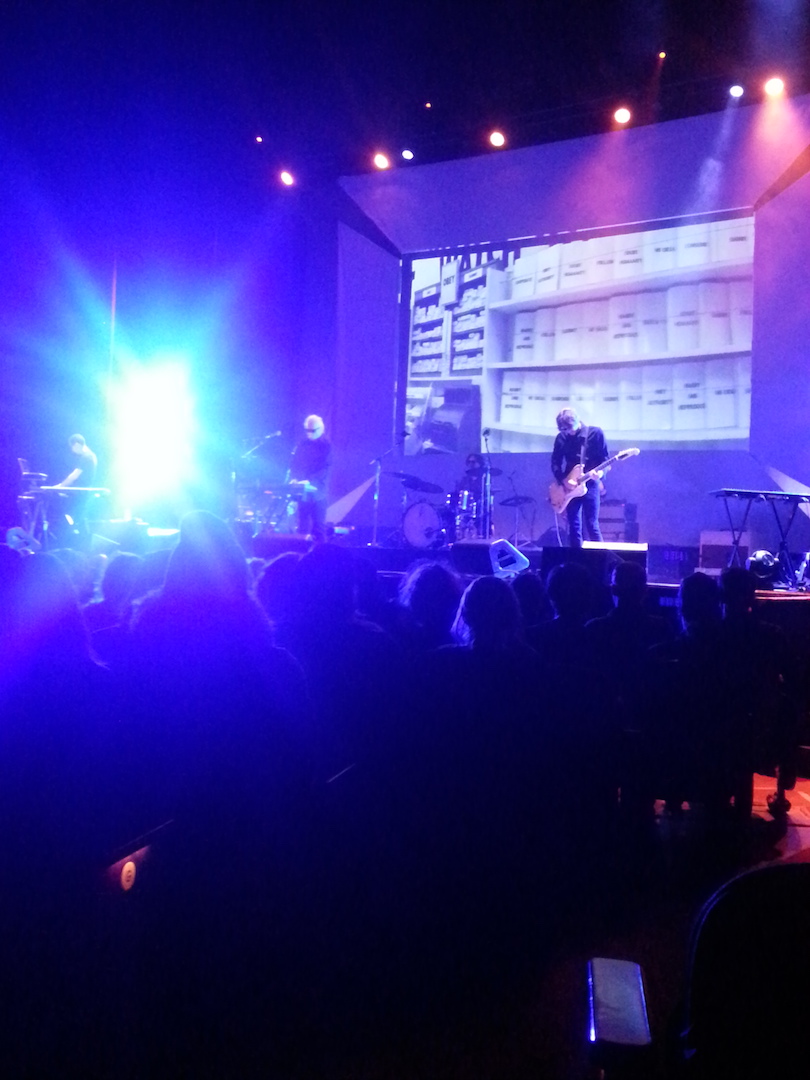 At the beginning of the set, we’re introduced to badass outlaw Snake Plissken – the eyepatch, the attitude, the grit – as the band thumps out the dark Escape from New York theme. A minimal drum machine groove, an agitated Carpenter synth bass-line, and chilling images of rifle sights on innocent bystanders announce Assault on Precinct 13, Carpenter’s unique horror film that uses bloodthirsty criminals as a stand-in for zombies. The band all simultaneously dons black sunglasses for the theme to They Live, Carpenter’s pitch-black satire on consumerism. Our hero can see aliens masquerading as humans and images of “OBEY” when he wears the glasses (Carpenter’s work predates Shepherd Fairey‘s art by at least a decade), and the crowd cheers when Keith David and the late Rowdy Roddy Piper go at it in a memorable fight scene that is brutal to the point of comedy.

Carpenter says a few nice words about Ennio Morricone (who actually composed music for The Thing) before playing the theme, and the grotesque images of his alien scourge make H.R. Giger‘s original Alien design look like a character on Sesame Street. “My friend and I have made five movies together,” Carpenter starts, referring to Kurt Russell, whose career he single-handedly launched, “but I think the most fun we ever had was when we went looking for a girl with green eyes…” Cue the cult classic – and personal favorite – Big Trouble in Little China, Carpenter’s mix of a Western, Chinese martial arts and mysticism, and Howard Hawks-level dialogue. Finally, we hear the insistent tinkling of a piano, the sound of “death coming to your small town,” and we see the rampaging unkillable villain with the unmoving mask, Michael Myers of Halloween.

An artist that creates even one iconic image/song/film will be remembered forever; Carpenter has done it several times and is still a forgotten man in a sense. He seems to have made peace with this fact, perhaps due to this tour, and the fun and the freedom he has had in creating these two albums, Lost Themes I and Lost Themes II. He has the casual air of an old gambler playing with a lot of house money. And though the half-packed house irked some like me, those who think Carpenter deserves more of an audience after such a career, after a second thought it made perfect sense for a John Carpenter retrospective: Everybody who missed it or panned it the first time around will be renting it on DVD and calling it a cult classic ten years from now.