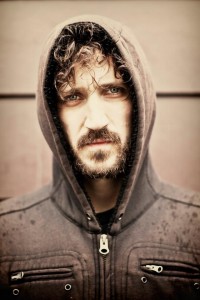 Ah, the exquisite pain of standing in an achingly slow-moving line in the rain, knowing that the band you really came to see is already on stage because you can hear them starting up, less than 50 feet away from you, through the decrepit walls of El Corazon. Battleme opened for The Supersuckers and The Toadies in Seattle – kind of an odd bill, but not so much when you consider all three are descendants of a sort of scrappy rock n’ roll outlaw prototype; although radically different in delivery there’s a similar intent (feel good, rock out, the end) and varying degrees of South/Southwestern state connections (Battleme’s Matt Drenik, a Portland-by-way-of-Austin transplant, was showing his colors in a faded Bocephus T-shirt).

Battleme’s opening set was just what I’d hoped for: raw and crackling with pent-up energy, lots of spitting and wild-eyed looks flying around, the kind that make you feel like you might be in trouble if you’re not paying attention in the first couple rows and get some eye contact. (A frontman that puts the fear of god in you with some piercing eye contact is never a bad thing. . . unless you’re standing still). Battleme’s jangly but solid songs are built on that mysterious combination of elements that many aim for but few honestly do well: songs that can make your heart swell or tears spring up because they just sound so crucial somehow. It’s warm weather music, made to crank up in the summertime.

Having said that, Battleme’s second album – Future Runs Magnetic – came out March 11 on El Camino Records. It’s probably the only record I’ve played and played again obsessively from the get-go since Prince started mysteriously dropping new music with 3rdEyeGirl on his website last year. It’s fucking fantastic, and I can’t put it down.

Looks like I’ll have a chance to make up for my lost 15 minutes of set time when Battleme returns to Seattle June 5 as they’ll be headlining over at Barboza. Get tickets HERE. They’re gonna go fast.

Have I mentioned it’s been a minute since I blew all my fun money a week before payday at the merch booth, stocking up on super-soft T-shirts and vinyl?