The brilliant Robert DeLong returns to his hometown area this Friday, November 20th. DeLong, an electronic artist with singer-songwriter panache, will visit the Showbox for a headlining performance drawing on his albums Just Movement and In the Cards. Well-known for putting on impressive and fun shows, DeLong shines at bringing an audience into a shared experience. I talked with DeLong this week about his work, roots and all night video filming.

You worked with several producers on In the Cut. How did you select them?

Robert DeLong: I set up a whole bunch of sessions as I was writing music. It was sort of arbitrary. . . people I met on the road or people that my label had contact with. I found people I connected with. For me it was really helpful. Even the boom guy, who usually does his thing by himself, helped me edit.

Do you set out to change tempos/add different styles within a song?

RD: I just see what happens. Some songs I’m very specific about – it’s this kind of song, and this is the kind of song I’m going to write. Once it starts to coalesce, I can follow through with that. Sometimes I just let the song evolve, and go wherever it’s going to go. 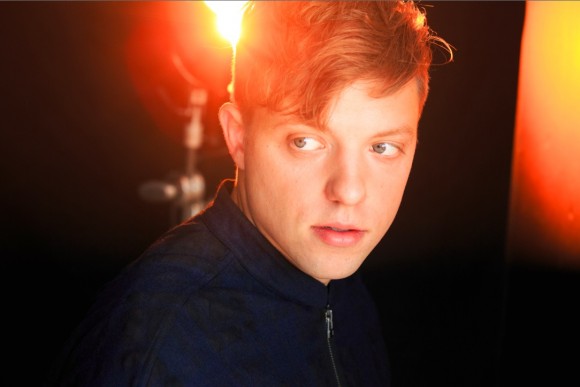 Did it come naturally to make your shows such a communal experience?

RD: That kind of evolved organically. My first shows were all just me and a large group of friends who were artists and musicians. We’d all hang out and go to shows. As I started playing more shows, my audience grew. The core idea was there: a community of people. I’ve always been interested, whenever I go to show, in having some sort of interactive element that involves me. Otherwise it’s just another concert.

What kinds of shows do you see?

RD: I go to a variety of shows. In Los Angeles and Echo Park there’s lots of rock and club music. I’m always going out to see that stuff. I see techno DJs. I can see Jazz or Classical and the next week see Kraftwerk.

You studied at Azusa Pacific University. What did you get your degree in?

RD: A music degree with an emphasis in audio engineering.

Do you plan on balancing emphasis on your lyrics with your music?

RD: I’ve always enjoyed lyrics that have a lot of possible meanings. I gravitate towards a lyrical style. I grew up in Seattle and had influence coming from people like David Bazan, Pedro the Lion and Jeremy Enigk. I listened to those people religiously. . .Death Cab and Modest Mouse. All of those bands were lyrically-driven bands, and had a specific kind of lyrical writing style. That’s just the world I favor.

You worked with Youngblood Hawke on In the Cards. I love those guys.

RD: We wrote the song “Don’t Wait Up” together. I’d written the instrumental part of it on the way home from Australia. We’d become friends from playing shows together. Popped over to their house one day and pulled out the instrumental. It came about really quick. I worked on it later with Tim Pagnotta (producer) and we finished it off. We recorded it with real instruments.

RD: Totally. I just read Childhood’s End. They’re making it into a series.

RD: I think they all came out cool in their own ways. I think my favorite one to record was “Don’t Wait Up.” We went out to Joshua Tree and filmed it over the course of the night, from sunset to sunrise.

What kind of jobs did you have while you were up-and-coming in music?

RD: I taught drum lessons full time. I had a studio in my garage where I would record bands. I played in a bunch of bands as a freelancer. I had my stuff on the side, and it took over.
~Dagmar

The Showbox’s event page has details on and tickets to Robert DeLong’s November 20th show. Friday’s concert is all ages, and Coleman Hell opens.