Night Moves, a trio from Minneapolis, released a groovy album on Domino Records called Colored Emotions this year. The album, utilizing keys, guitar and the beautiful voice of singer/guitarist John Pelant, captures a pure rock sound. I’d call it gentle rock, a rock that’s been missing from music. I’d like to take a road trip with this music and stay in random motels in the Southwest. I can picture rain, dust storms . . . okay now we get to my talk with singer Pelant. 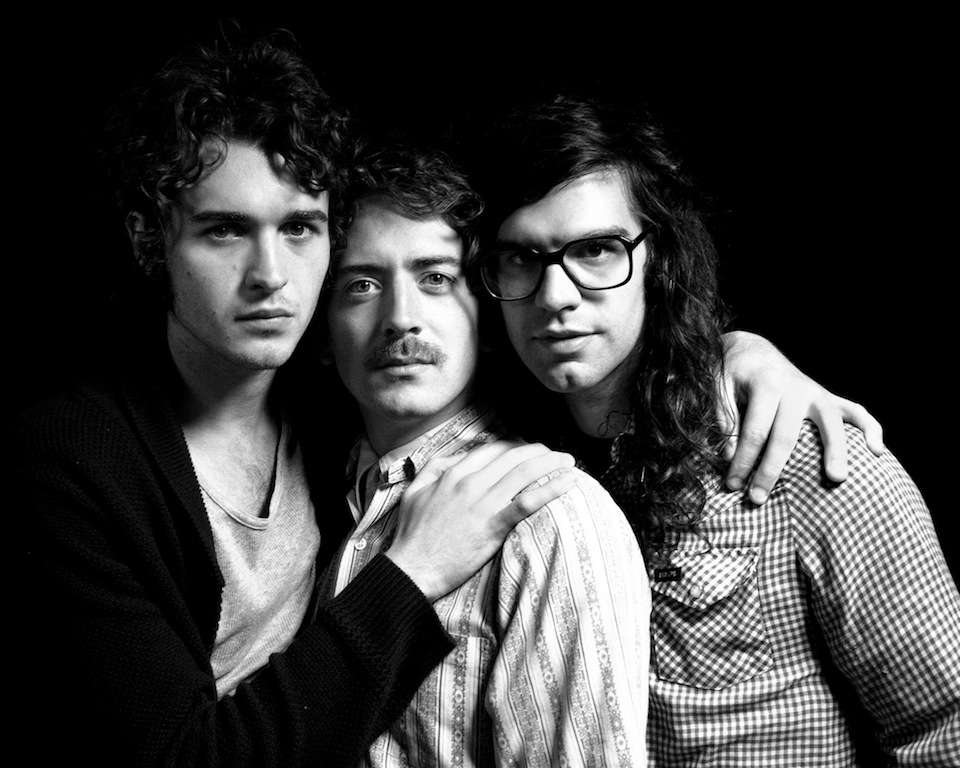 The band, comprised of Pelant and high school friends Mark Ritsema (keys/guitar) and Micky Alfano (bass) formed in 2009. It’s always amazing to me for some reason when bands from out of high school friendships. What were Pelant’s impressions of his future band mates? I thought Micky was way older than he actually was, I thought he was a senior cuz he had really long hair and a full beard/mustache.” I can understand that – beards/mustaches did make someone appear older in high school. The guys had another interest in common in addition to music, skateboarding: “I thought Mark was friendly and he skateboarded. Mark and Micky met each other in the school jazz band. I met Micky and Mark through skateboarding.” Initially a two-piece of Pelant and Ritsema, bassist Alfano was recruited by Ritsema. “Mark asked Micky if he wanted to play on some new tracks that we had. We basically thought it wouldn’t hurt to add some thick low end to the songs, nothing could ever be wrong with that.”

Pelant, in possession of quite the vocal range, has no traditional training. It’s likely best that way, just left as an unaffected creature of its own. When they decided on a name for the band Pelant says “We thought the name fit the sound and the vibe of the music, it was originally the title of the first song we wrote, “Country Queen.” As a duo, Night Moves had their first show – as Pelant recalls: “The first Night Moves show was a two-piece gig at a swanky modern hotel lobby in downtown Minneapolis, it was weird because we didn’t really have our shit together, but there were lots of socialites there and hot older women and men. I think at least some people dug it.” Was it difficult to break into the Minneapolis music scene? “No, it was not difficult per se; it just took time. There are a lot of venues to play every night of the week, so people were willing to book us and give us a shot. I think people started to notice us when we came out with the first version of Colored Emotions.”

Prior to the release of Colored Emotions, the band members underwent some higher education, Alfano at MCTC, Ritsema studying Anthropology at U of M, and Pelant studying Anthroplogy as well at at U of W/Milwaukee and U of M. When it came to working on Colored Emotions, the band was able to have complete control. Pelant asserts, “The album was self-produced, we dictated how we wanted the record to sound to our first engineer, John Miller, who then turned the knobs accordingly. We didn’t know much about recording, but we did know how we wanted the songs to sound and we had a lot of our instruments sounds from the start, it was just a matter of capturing them on tape.” Later they worked with producer Thom Monahan, whose plans meshed with Night Moves’: “When Thom Monahan came into the picture the record was already finished. Thom just added a few extra spices. He did record the title track, which turned out rather nice. Thom was great because he loved the songs and he didn’t try to change anything about them Thom just wanted to bring out all the track layers of the record, of which there were a lot. I felt Thom understood all the points of the music that we were trying to touch on.” And, adds Pelant, “Thom loved weed and tequila and was always willing to have a drink in the studio.” The result is a gorgeous album with perfect segues, something Pelant worked on: “I wrote down a lot of different track listings and how the songs could flow into one another. It basically came about on paper. We had the songs and we just had to figure out the vibe we wanted on the record and from there we just played around with different orderings and transitions.”

Colored Emotions, named after a Night Moves song (“we thought it was a fitting title for the first batch of songs we released. The name also seems to have an appropriate overall feeling that we wanted to portray,”) was picked up by the Domino label, and as Pelant remembers “They were the ones who showed the first interest and we thought that they were cool. When Domino came into the picture we were really looking for anyone to put out our record in the physical form. We were glad it was them who turned up and showed interest in the record.”

Earlier this year the group toured with Django Django (including an appearance at the Neptune in Seattle) – an experience Pelant mentions “Was cool. They were nice as were the venues we played. We drank lots of tequila and drove through a lot of snow storms – not at the same time though.” At the Neptune show Pelant said they’d driven through 4 1/2 blizzards. I hope this doesn’t happen during their trek with Poliça, which will kick off this Friday. The Poliça tour came about quite easily: “We know some of the fellas from Polica from the music scene here in Minneapolis and we got in touch with them and asked if they would want to play some shows and they said yes, so the tour came about through a mutual Minneapolis connection.”

Night Moves has made a video for the song “Country Queen,” which has this amazing golden lighting. I tell Pelant it has a really awesome ‘70s vibe – and that’s no accident. “We wanted it to look like an Olivia Newton-John video. We wanted some that was creepy, yet warm,” Pelant confirms. Other Night Moves imagery includes an entertaining tumblr page, with among other things, a friend of theirs cat, Rupert, in a tutu. When Night Moves isn’t working on music Pelant tells me “We like to swim and go to the beach in the summer. In the winter, we like to knock back a few with friends and go sledding.” Pelant says he’s a reader of autobiographies and Harlequin romances. Also, the secret of that unique cord he’s got attached to his guitar? “I made it with some plastic tubing and silver tape, which we put on a lot of our stuff. Space type shit.”
—
interview by Dagmar

On Friday, April 5th Night Moves open for Poliça at the Neptune. For more details and tickets click here.