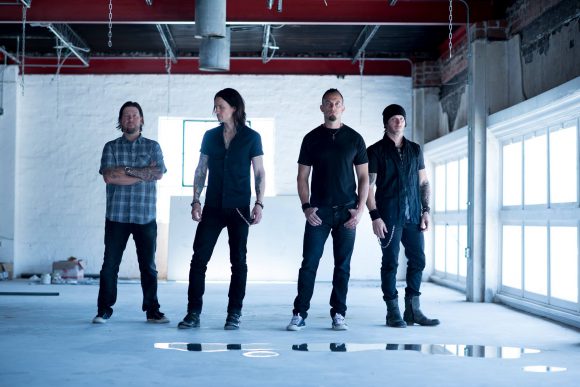 Rock band Alter Bridge, from Orlando, Florida, wrap up The Last Hero Tour 2016-2017 at the Moore Theatre on Wednesday, February 22nd. Going on tour, letting fans hear the music from last year’s release, The Last Hero, seems a smart choice. The album is their Billboard top-charter since their debut, One Day Remains, and has particularly spoken to listeners with the political “Show Me a Leader.”

A big impression I have of Alter Bridge, three-quarters of whom were part of Creed, is their ability to make songs with perfect segues between faster parts and the more tuneful, vocal portions. That can be a huge problem for me in listening to harder rock. Sometimes it can be excessive, but entertaining; at other times, it’s nice not to think, now here’s the guitar solo. I’m not saying that the guitar solos don’t impress, they do. What I mean is they’re just as melodic as the songs’ hooks, the catchy bits. Think of the songs as containing hooks within hooks.