Julia Holter challenges, on the opening track of her first album, to “try to make yourself a work of art,” possibly both to the listener and to herself. She has risen to that challenge. No matter how casually she may stand, she seems brought to life from an Impressionist painting and speaks to the crowd as if waking from a dream, given to instant distractions, half-thoughts, and sentences that seem to evaporate as she speaks them. An introduction to a song gets cut off as she points out a cool green light, says it reminds her of The X-Files, which she then admits never watching. Appropriately, she still drinks white wine in the winter (granted, she’s from LA, and stage lights are hot, but it’s cold here in Seattle. And it’s dark.), striking a somewhat unintentionally funny and almost entirely unintentionally cool pose that recalls, a bit mockingly, a condo advertisement. Given her material and her complete immersion in every word, sound, vocal maneuver, story, the stumbling coherence of semi-consciousness between songs is completely understandable and utterly charming. This also speaks to the strength of her composition and lyricism. Where she may seem lost when speaking, her lyrics sparkle and compel with high-art poeticism, evocative brevity, and tremendous emotional resonance. Her settings and stories, no matter how sweet and optimistic or how turbulent and terrifying, are the places she wants to be. And she is visionary enough to bring you into her fever dreams that unfold like great French Expressionist cinema. 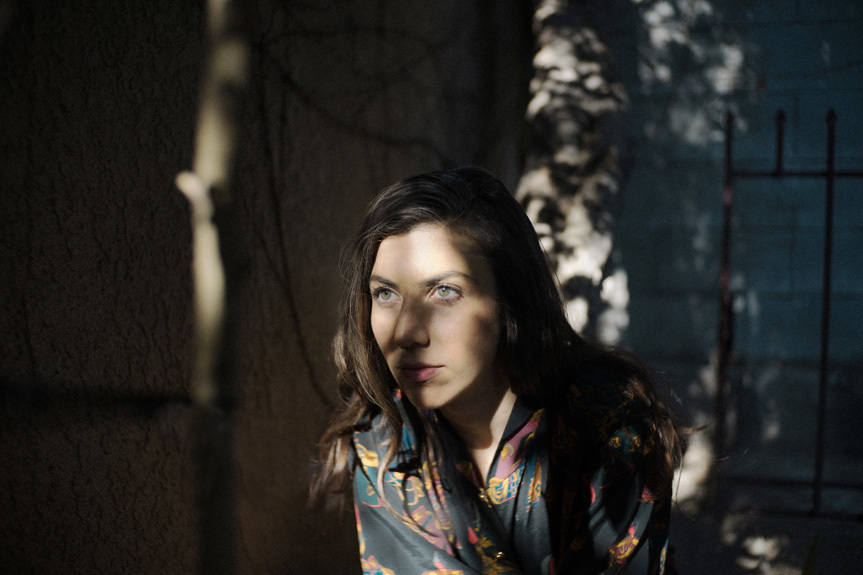 It certainly helps that she has assembled a crack backing band. Devin Hoff is an upright bass virtuoso, given equally to nimble jazz improv as well as bowed lines with monolithic low-end and moody gravity; Corey Fogel is a master of feel and dynamic, and Dina Maccabee is the x-factor extraordinaire. Her viola, often augmented with loops, vacillates between ethereal textural lines and frantic emotional explosions played with an arsenal of extended techniques and improvisatory prowess. If I could, I’d hire her to play on every project I’m working on. The band gets extended room to stretch out on surprising show opener “Vasquez” as Holter opts NOT to start the show with one of the more immediate tracks off her latest record. The live performance features a glorious breakdown that brings significant more power than the recorded version. “Horns Surrounding Me” is simultaneously looser and more endangered, and a thorough reworking of “So Lillies” (off her first album, Tragedy,) really brings out the beauty of its crafting while emphasizing some stunning vocal interplay.

Through it all, though, this is undoubtedly Holter’s show. Not enough has been written about her voice. She often gets compared (favorably) to Julee Cruise but her sweet, soft, high register is only one aspect of a voice that is and continues to become an incredible force of dynamic, tonal, and emotional range, all while distancing itself from credible comparisons to anyone else. “City Appearing” has the same effect as the record wherein the listener might not notice the song and its setting before finding him/herself unconsciously enveloped in its mist and mystery, only more so. She saves the big single, “Feel You” until the encore and closes out with a solo piano/voice performance of “He’s Running Through My Eyes,” the first song of hers I ever heard. The one that hooked me instantly, paralyzed me, made me listen obsessively for days on end. Even without its orchestrations and multiple vocal lines, and even though she said she didn’t quite remember the chords, it was still an absolutely arresting closer, another ghost worth chasing, another dream worth staying in.

This was also the second time I saw Circuit Des Yeux, whom I also saw open for Xiu Xiu at Barboza. As you may recall, I wrote a profane rant about the obnoxious crowd behavior during her set at Barboza. I was happy to see a much more respectful crowd this time around. She’s really easy to like on the sole merit that she’s a solo acoustic singer/songwriter act that DOESN’T play wispy, self-consciously precious songs about love, heartbreak, and mountains. Channeling Jeff Buckley, Scott Walker, and Antony Hegarty, her songs move from the droning beauty of Angels of Light to something guttural, feral, terrifying, and wholly riveting.