Blood Red Shoes are a Brighton, England-based duo made up of Steven Ansell (drums/vocals) and Laura-Mary Carter (guitar/vocals). Their second EP, Fire Like This (follow-up to 2008’s debut EP Box of Secrets) came out in 2010. I recommend both CDs. Though they differ from each other they are excellent, forward chunks of British rock. I interviewed Ansell in December 2010, and I wanted to know about the band’s videos, how they met (which involved donuts!) and how they arrange their awesome songs.

What was the mood like on the set of the video for “Heartsink”?

Steven Ansell: It was quite strange actually. People travelled from a lot of places, about 6 different countries in fact, to be in the video – but most of them travelled either in pairs or alone. So there were 70 or so people who barely knew each other, and definitely had never shot a video before or had a director barking instructions. So it was amazing to see all these people gathered and find out what items they’d brought, but it was also really awkward.

In what ways do you differ from other contemporary British bands?

SA: Well I think there are other bands that come from a similar mindset to us, just not many. Generally speaking a lot of English guitar music (except for the metal scene) has been dominated by a kind of Libertines/Franz Ferdinand style which is really tame and limp to my ears. And those bands seem to go hand in hand with a quite commercial view on their music and a willingness to play the game, it’s all a bit careerist. We’re from a punk rock background; we’re just as ambitious as those other bands but we don’t want to soften our sound out or just do ANYTHING to get there. We want to make music that has good hooks but also something that has aggression and power and big fucking riffs. I think English bands can be a bit shy of that.

You two met in a donut shop? Where was it?

SA: It was on Upper Street, in London, near a few venues like the Garage.

What were your first impressions of Laura-Mary?

SA: My first impression of Laura-Mary was that she was the singer/screamer in this really cool riot grrrl band, and that she was way too cool to talk to me. Turned out she was just really quiet!

How did you find the director for “Light it Up,” James Lees?

SA: James Lees was awesome. Actually that’s my favourite video we’ve ever made. We felt like James listened to us and incorporated our ideas into the video, and the editing of the video, more than anyone we’ve worked with. He’s also the most expensive director we’ve used which is why we haven’t been able to use him as much as we’d like. 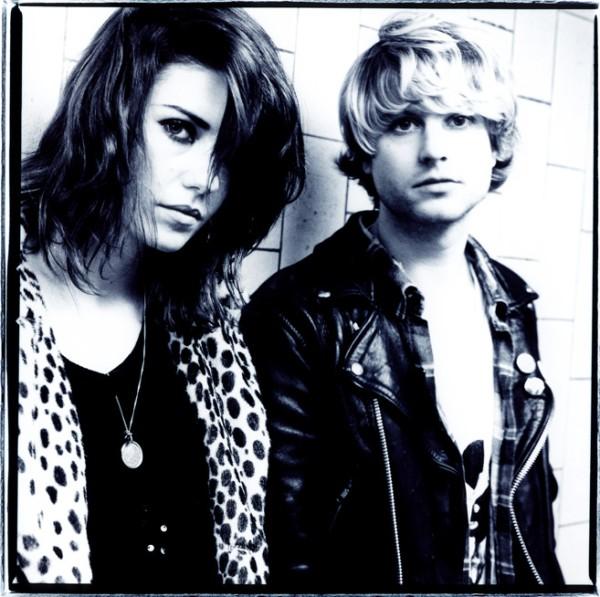 How do you decide which of you will sing each part in a song?

SA: It’s just instinct really. Usually the way we write, we’ll jam on a song and whoever starts singing first ends up singing those parts. Very occasionally we change it around – for example [in] “This is Not for You,” I originally sang the verses, but Laura did it better so we changed it around.

What kind of jobs did you have before you were in Blood Red Shoes?

SA: I used to work in a venue in Brighton called the Freebutt, doing the sound. Before that I was a cleaner. Laura-Mary did all kinds of jobs, working in shops, bars, offices – she would work for 3 weeks then have to quit so we could go on tour, then try to get another job as soon as we got back.

I read one of you has a philosophy degree -­ is this right? What did you find interesting about that topic?

SA: Yup that’s me. I don’t really know what drew me to that. I just find those sort of studies interesting. I was always really academic in school but I didn’t want to do a degree that had any practical application, I wanted to study something that would make me think.

You did semi-nude shots with Dark Daze. Would you do more of something like this? What would it involve?

SA: We did those photos a long time ago, with a friend, before our band was really known at all. The photographer had the idea and it had no relation to our band or what we are. I regret doing those photos because they won’t fucking go away and they don’t suit our band at all. They’re great photos, but it’s just not us.

SA: We both just live and breathe music, there’s very little outside of that. I mean we both appreciate film, and have been getting into photography recently. Laura-Mary was an art student before the band and she’s always maintained an interest in visual arts but we don’t really have much time for it!

How do you think the vocals differ between the albums?

SA: I think [on] the second album they sound much better. I mean, they have more depth to them and aren’t always buried in double-tracks. I think they sound more honest, and more emotive and a lot more like the “real us” than on the first album.

Did you make an intentional sound shift from more to disco to more rock in the two LPs?

SA: Yeh we felt like we didn’t really hit the mark as well as we should have with the first record so we put a big emphasis on getting our inner Led Zep across on the 2nd album. [for] A LOT of people the first album didn’t capture what we’re like as a live band; they said it sounded a lot more pop and less heavy and aggressive. So that was a big target for the 2nd album.

Would you use synths in any of your songs? Why/why not?

SA: We don’t set any rules about what we do or don’t use. We’ve written some new songs using keyboards although they’re not particularly “synth”-like sounds. Generally speaking that instantly conjures up images of nasty sounding cheap ‘80s sounds, which we are firmly NOT interested in. But we’ll use anything we think sounds good. We’ll never end up doing anything like the Yeah Yeah Yeah’s 3rd album though, we’re pretty firmly a guitar rock band, that’s for sure.

I read about you getting quite sick at/before shows ­ do you still get nerves like this?

SA: Actually it wasn’t nerves it was heat exhaustion, I used to get so hot from drumming and singing in tiny clubs, that I’d black out and puke a lot. I’ve got a lot better now – for one thing i can actually play properly now so i don’t get so worked up. I also invested in a couple of fans to stop me overheating [laughs].