At least in America, Swedish band The Hives were barely legal when they released their first LP, Barely Legal in 1997. Most band members were around the age of eighteen years old, and they began their ascent to international stardom at an age when many Swedish men become eligible for Sweden’s then mandatory military service. With two EPs already under their belt, including Oh Lord! When? How?, they’d shown an ability for creating rapid-fire punk rock of the sort parents might hate. This theme carried onto Barely Legal, with songs such as “A.K.A. I-D-I-O-T” and “The Stomp,” which hinted at more rhythm and blues mixed with surf. By 2000, the group had developed this sound even further on Veni Vidi Vicious, becoming masters of their own genre: Swedish whatever we want to do because we’re The Hives rock. They declared guerre nucleaire (“The Hives Declare Guerre Nucleaire”) and meant it. “Main Offender” and “Hate to Say I Told You So” dripped with catchy hooks, as did “Supply and Demand” with its sordidly awesome beat.

The appropriately named Tyrannosaurus Hives hit the public in 2004, and by this album The Hives became very well known in the States with a twelve track album fitting in with the tastes here. Or did The Hives make us realize this was what we were missing? From “Antidote” to “Walk Idiot Walk,” each song one-upped the next, making selection of a single a pleasant joke. In the end “Walk Idiot Walk” and “Two-Timing Touch and Broken Bones” were the singles, but any song could have been a stand-alone. I think it was around this time the band caught my attention with their unusual sounds and black and white ensembles. I saw The Hives play Showbox at the Market and had my world spun around. Lucky enough to be part of a meet and greet, I collected myself to meet The Hives. It was and remains a special moment in my life. 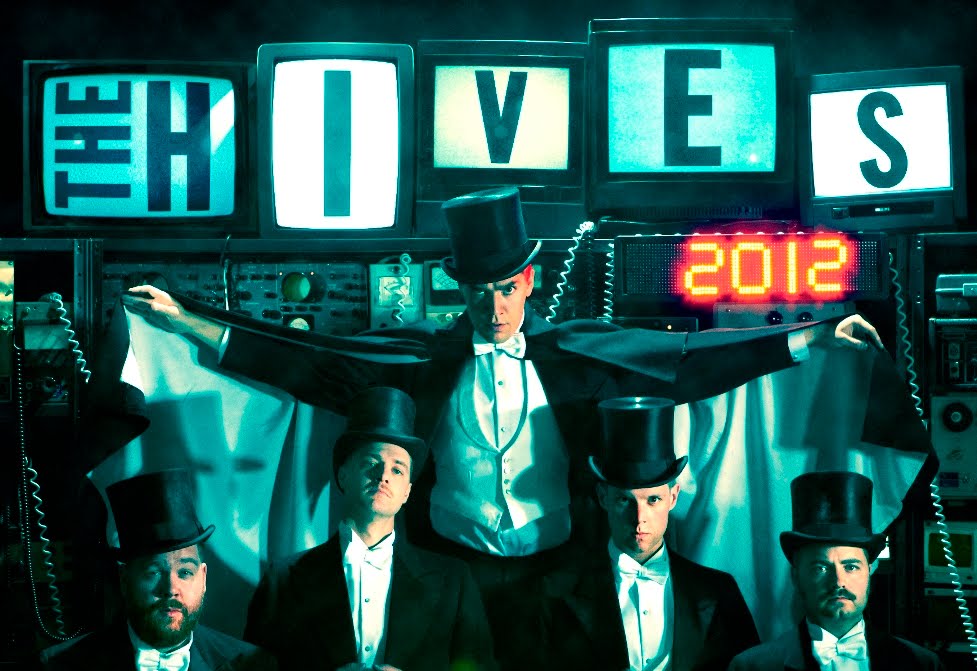 After a recording break, The Hives stormed out again with The Black and White Album, and its explosive “Tick Tick Boom,” whose video featured The Hives as giants delivered to a museum. Totally suitable. The Black and White Album again liberated my ears with every song a single worthy gem. “T.H.E.H.I.V.E.S.” brought in some disco, “Hey Little World” and “Try it Again” burst a few blood vessels, and “You Dress Up for Armageddon,” well, it brought me to my musical knees. As with other Hives’ albums, the bonus songs deserved a proper space on an album (Hello, “I Can’t Give It to You”). Their EPs, A Killer Among Us and Tarred and Feathered also offered up plenty to drool at.

Now we’re at Lex Hives, another appropriately named album – The Hives are law, you are crime after all – and another perfect collection of perfectly created songs. If I didn’t love this band so much I would like to see them release something bad, but I have now come to terms with the fact that they are incapable of releasing a bad album. Including “Take Back the Toys,” with what is one of the best drumbeats ever, and “I Want More,” Lex Hives has more of a hard rock feel to it while maintaining the distinctive Hives’ sound and clever lyrics. 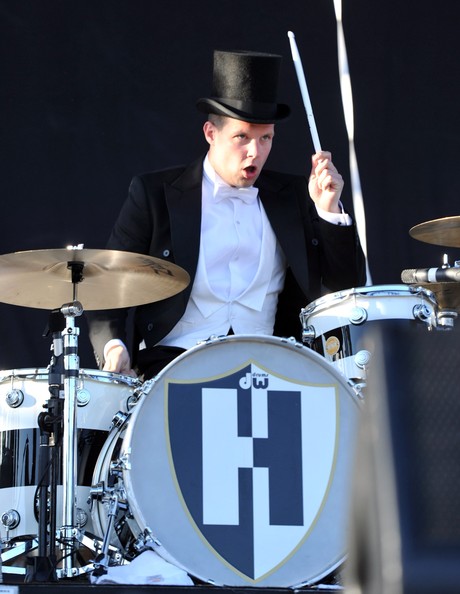 Yesterday afternoon I talked with Chris Dangerous, drummer of The Hives, and he answered every single question I asked. And there were a lot. He sounded comfortable: I’m on a couch in the venue in Victoria. It’s a beautiful place. They have orcas here.” Dangerous, whose proper last name is Grahn, must be one of the top two drummers out there – I’m having a hard time thinking of ones who match him – said his parents gave him the name Dangerous. I wish that were so. Dangerous’ Finnish parents moved from Finland to Sweden in 1968. I asked him if he started to learn music from his father, who was in a band as well. “Yeah, I guess I did in a way, because it always around at home.” Both of his parents were musicians. “My mom played piano and my dad played guitar, and he used to sing in a group.” I wanted to know if Dangerous chose drums as his instrument? “I really had no choice. My older brother played in a band and they needed someone who played the drums. I was invited, so to speak, to play drums – on pots and pans.” Was playing drums a good emotional release as a teenager? “Yeah, maybe. I didn’t really think about it that way. I just thought it was cool playing the drums, but it probably was.” After joining The Hives around the age of thirteen, he says “We started playing at school parties – that’s probably our first show.” The Hives’ work ethic began right away: “We were in school and we played sports but we weren’t really doing anything. What we loved more than anything else was to play music, which is what we did in all free time we had. That’s how we ended up sounding the way we do. There wasn’t much time for anything else – A little time for the ladies, but nothing more.”

The Hives will have their twentieth anniversary as a band in 2013. Do they have plans to celebrate the milestone? “We missed our tenth anniversary so we were gonna celebrate our eleventh instead and we also fucked that up. It seems like if we plan something for next year we’re just going to fuck it up. We’ve been talking about drinking one hundred beers together.” Twenty years in, The Hives always manage to keep everything fresh sounding – how do they do it? “We’re afraid of doing something that we wouldn’t love fifty years from now. Everything has to be perfected into what you get to hear. We could have released an album earlier but it wouldn’t have been as good. We’re very picky about our songs and what we let people hear. It’s a long process of making records that we will really love fifty years from now. That’s where we start out with every record and we don’t give up until we’re there. It’s hard work.” The band was handpicked by The Rolling Stones to support them on their tour. I asked Dangerous how weird it was to find themselves in that situation? “It was great. We always got that question, who would you like to play with, and of course Rolling Stones always came up. When we were asked to support them we did not have to think for long. That was a really nice thing to have done.”

Chris Dangerous likes going fast, “I collect cars and bikes. More bicycles nowadays actually. I also ride mountain bikes in cross-country races. It’s great.” He also likes leather, such as the gorgeous jackets Lewis Leathers, known for their jackets worn by rockers such as Chrissie Hynde, has outfitted the band in for their offstage gear. The Hives “wanted to have leather jackets like The Ramones and The Clash had, and they wore these leathers. We contacted them and got measured up. The jackets came and they’ve been our best friends ever since. I love them,” says Dangerous. The handsome band has had several looks in their black and white themed-outfits, and Dangerous told me, “My favorite is the one we have right now, with the top hat and tails. I think it looks smashing. I also like the one where we looked like boy scouts with the knickers, berets and ties. That was a pretty rad look too.” I agree. I’m also dying to know what kind of Hives merchandise he’d like to see made?: “We should probably do Hives bicycles. Hives pants. A Hives version of everything would make the world a better place.” I agree with this, too.

Videos of The Hives’ songs have always been very entertaining, from the aforementioned “Tick Tick Boom” to “Walk Idiot Walk.” Which video does Dangerous think best represents The Hives?: “Of course I love the last one a lot, “Wait a Minute.” I watched all of our videos last week because my daughter loves to watch our videos. I watched them all in a row and I got goose bumps watching “Die, Alright.” It’s very Hives.” I bet his kids are impressed with their dad. “They are now. But like every kid maybe when they hit fifteen they’re not so impressed with their dad,” reflects Dangerous.

Chris Dangerous’ drum kit, while playing live, is set up quite low. Is it set up that way while recording? This is something I need to know. “I change it around a bit in the studio to pinpoint everything we play in each song. I use more than I use live. The live kit has always been the same, at least the amount, but for some songs you need other sizes of drums, or more drums, more cymbals,” answered Dangerous, who has also worked as a producer (but note, The Hives also produce their own music). He produced Swedish band Alex Carole and the Crush’s debut album (“We recorded a lot of it in my studio. It’s not something I do all the time. I wanted to help out. Their second record is coming out soon.”)

More about Dangerous: He’s been a vegetarian for the last fifteen years, does like reading (just finished Born to Run by Christopher McDougall, “It was great.”) enjoys films – he mentions The Green Mile – and he goes to live shows in his free time: “We just played the Made in America festival. We saw Santigold, a few of the guys saw that Pearl Jam show where Jay-Z came out. We go to see shows all the time. That’s pretty much what we do when we’re on tour. We’ve got support from a band called FIDLAR, so I’m going to watch them tonight.” He’s looking forward to the American tour – The Hives see America as “The start of rock ‘n’ roll and punk. We love this country, and the fact that it’s so different from one place to another.” Dangerous listed these two things as the best about his own country “that all my closest friends and family are there. Number two is probably that we get four seasons, which I love.”

And one last thing about Tyrannosaurus Hives – what’s Dangerous’ favorite dinosaur? “The T, rex, of course. They now found evidence that dinosaurs had fur, feathers too. That sort of makes it a bit different. Dinosaurs would not look as cool wearing fur.”

The Hives play Showbox at the Market on Friday, September 7th. Doors are at 8:30 – all ages. For more details on the show and to purchase tickets follow this link!