You need to know the British artist Plan B. AKA Ben Drew, Plan B started out writing R&B music and then tried his hand at hip hop. His debut, 2006’s Who Needs Actions When You Got Words sprang him into music fans’ collections everywhere. Last year he released The Defamation of Strickland Banks, a different kind of album, one based more on R&B but with some subtle rap in there for texture. Strickland Banks chronicles a story of a falsely accused man, but really you can listen to any song off it by itself, or appreciate the entire plot as the songs unfold. He’s made videos for several of the songs, each one visualizing the story. However you choose to partake, it’s incomparable. I talked with Plan B right before he was to set off for his tour of the States. He’ll be at Chop Suey this Saturday, April 23rd and I encourage you to check him out.

You won big at this year’s BRIT Awards.

Plan B: Yeah I won Best Male. It was amazing – I didn’t expect it. I was up for three but I’m one of them people – I always expect the worst. It helps you deal with it when it happens, you know? It was a nice surprise to get an award.

I thought your performance turned out well.

PB: For someone like me to be on a program like that which is quite poppy . . . I like to keep that edge. The live song that I’d done, there’s no reason why it couldn’t have been played on the radio because there’s no swearing in it. I come from an underground hip hop environment and I’m known for my edge. We had to bring that, I felt, live on stage.

PB: “Prayin’” has been my favorite. I really enjoy doing them. “Prayin'” – from what we wrote on the page, the treatment for it, and the end result was extremely close to how I had it in my mind. It’s very rare that happens. It’s great to tell violence from dance, which is what we set out to do. The dancers we had, the choreographers we had, and the whole general look of the video was just – I was over the moon about it.

Did you direct the videos?

PB: Dan Wolfe directed them. I wrote the Strickland Banks story, and I would tell Dan what I wanted the videos to be about and then I would give him the creative freedom to add to it.

Where was “Prayin’” filmed? It looked like a real prison.

PB: I think it was an old university campus. It looked quite menacing and institutionalized. It’s hard to find places like that. It’s hard to get into real prisons to shoot so I was really happy that we managed to get something that looked kind of authentic.

How did you get into acting? I read that your next role is in The Sweeney with Ray Winstone.

PB: I got into acting from appearing in my videos. A film director saw me and wrote a part for me in a feature called Adulthood. After that I got put up for the roll in Harry Brown with Michael Caine. Since then I’ve been doing a lot of acting in the videos for Strickland Banks. I guess a combination of all those films got me the role in The Sweeney.

Have you met with Ray Winstone yet? He’s one of my favorite actors.

PB: I met with Ray; we had a chat before they decided to put me in the film. He’s one my favorite actors and it’s a dream come true. 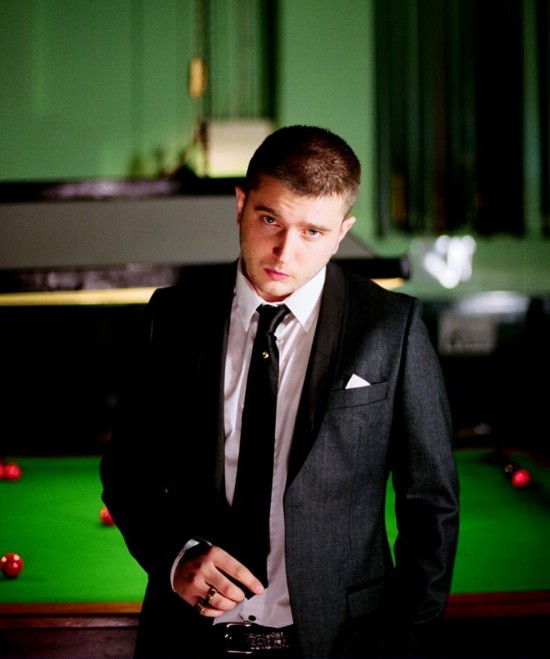 What were some of the difficulties with making a concept album?

PB: Getting the story told knowing that you can’t just have a song that tells a story and it not be a good song. Trying to make songs that can just be songs without the story, but at the same time incorporate the story. What’s great about the record is you can listen in whatever order you wanted and you can still enjoy it because it’s good music, with good lyrics and good melody. If you want to, and if you care, you can listen to it in chronological order from start to finish and get a sense of the story I’m telling, which is about an innocent man who’s been wrongly convicted of a crime that he didn’t commit and sent to jail.

I loved your other work too so it’s cool to have so much variety.

PB: I came out as a hip hop artist first but I was singing before I started rapping, and people don’t know that. I think, in the future, always expect variety from me. Always. The stuff I did with Chase & Status, the drum and bass stuff, the dubstep, the kind of underground music – I’m gonna carry on doing that. There’s no reason why I’d stop that, so I think it’s better if people start to get that I am a polymath. It’s better that they get that now, to stop them from being disappointed in the future when I decide to do something they didn’t expect me to do.

Your “Pass Out” cover was fantastic. You mentioned doing reggae in an interview, and people thought you were kidding.

PB: When I talked about that people thought it was a joke, but I’m not joking. If I say I’m gonna do a reggae album, then I will. It’s just waiting for the right time, the right time in my life to do that. I could show you on my computer reggae stuff that I’ve already done, and you’d understand that I’m genuinely capable of doing it. The general public, they don’t know what I’m capable of. I can only show them my talent when I release an album or when I make a film. Those things take a long time. In time, when I do release my work people will get it.

You grew up in an area of London called Forest Gate – was it hard growing up there?

PB: Anywhere in any city is a hard place to grow up.

PB: I never like painting that picture that I had a hard upbringing. I think you can have someone that grows up in a ghetto, and somebody who doesn’t and their own lives and personal journeys, well, it’s just personal to them. The hardships they go through, to them, feel like the hardest thing in the world. Then you compare it to other things and it’s not. There are a lot of people, when they grow up they see that. They see other people who’ve been through worth shit than them. It helps them get over what they got through. They just can’t compare to a kid that got raped by his father or abused his whole life. My life, I grew up with domestic violence in my house. I grew up seeing my friends getting addicted to heroin, seeing my friends die, having people try to bully me in school. I’m not saying that I had the worst upbringing, I’m just saying yeah, it’s tough like it is anywhere and I stood my ground. The reason that I ever got in trouble with the police is because I stood my ground, and I wasn’t afraid to fight people to stop them from picking on me. Other than that I think I done all right. Where I grew up, yeah, there’s prostitution, there’s drug dealing, there’s guns and murder, but it’s not as bad as people might think. Guns and murders and prostitution, it’s an underground thing. It happens, and it’s there. It’s only gonna affect you if you get involved in it. If you walk down the street and walk past it, you’re fine. That’s the kind of place where I’m from.

About that cat in the video of the song “Pieces” you did with Chase & Status. Are you a cat person?

PB: That’s my cat. I’m a cat person. I’m at the studio right now recording my new album, I’ve been here all month, living here and I brought my cat here because I’m coming to the US for six weeks. For twelve weeks I won’t see that little motherfucker! I directed that video. The whole reason for putting the cat in the oven – I didn’t think about it until after we’d edited it and sent it to MTV and they said, we can’t play this – I never thought for a second that this might, maybe influence kids to put cats in ovens. The whole point was that this girl, his ex-girlfriend, brings a video camera to film footage of her smashing up his flat, breaking into his flat and letting in a bunch of homeless people in to have a party. And then put the cat in the oven. He realizes he has enough time to save his cat from dying if he runs back. That was the whole point, to make out that the girl was a fucking bitch. Obviously when you’re an artist like me you’ve got tunnel vision, it’s all about the art and telling the story. You don’t think about stupid, idiot fucking kids who think that’s cool. Yeah I put my cat in an oven but we didn’t turn it on or anything.

What other types of work have done? I read you were a chef?

PB: I was a commis chef. I wouldn’t ever say I was a chef. I prepared the ingredients for the other chefs. That was the only real job I ever had.

PB: A fucking hard job. That’s why when people talk about a hard day’s graft, I know what that fucking feels like. For me, you’ve got a nine-to-five job, that’s hard. But it ain’t as hard as what I had to do. I had to do eight-day weeks – eight consecutive days – you’d have three to four hours sleep.

Did you focus on science and math in school?

PB: No, I was the worst at both of those things. I studied media production and film in college after I left school. My mom and my sister always said you, need something to fall back on. I said the only other thing I see myself doing is film. I went to college and dropped out, and thought fuck coming out of university just to get a degree in film with no experience. I thought, I’m more likely to make it in music, and if I do that I’ll find my own films. And that’s what I done. Got a record deal, funded my first short film and that got me my first feature film, Ill Manors. It’s almost done.

You sang with Elton John last year. How surreal and weird was that?

PB: It was fucking weird man. You feel like you don’t deserve to be there. If you’re humble, you’re like, I should not be here. I still feel that way. I won’t have anyone tell me that I don’t deserve the things I’m getting. With the same breath I’ll never say that I’m special. I’ll never say that I’m better than anybody else because I’m being given these opportunities. I honestly feel like I’ve somehow fooled the world. I guess that’s how you keep some normality. Keep your feet on the ground. I’ve worked hard, and I’m gonna be in The Sweeney and that’s great. But the job hasn’t started yet. I haven’t completed that mission. It’s a mission that I have to properly prepare for – make sure that I’m the fucking best I can be when I do that. If I act like I’m a fucking star, I’m gonna be shit and embarrass myself. The only way you can do that is being humble.