House of Thee UnHoly, a fabulous rock and roll burlesque romp, returns to the Triple Door tonight, Wednesday March 11th for a five-night residency. The show trips out with bluesy music, compelling dance and beautiful costumes – all creating a happening. That’s right, a happening. At the helm of the production as Creative Director is Seattle native (by way of Sweden), Paula Sjunneson. Sjunneson, well known for her productions and events, runs PaulaNowEvent (formerly The Swedish Housewife). When Sjunneson came back from her two-year break, she told me, “It was as my new production company PaulaNowEvent, and House of Thee UnHoly was the first public event I did as PaulaNowEvent, but it was the fifth production of that show. I also did two private events: one was a house party with Puddle’s The Clown for a Private Puddles Pity Party two months before House of Thee UnHoly was remounted at The Triple Door in March of 2014.” I talked with her last weekend about the absolute beast this House of Thee UnHoly is. There’s quite a history to and future for the show!

What’s different about Seattle since you lived here before?

Paula Sjunneson: So much. First of all, the skyscrapers sprouting out of the ground everywhere. Seattle has developed a really great scene for alternative performers. And that is not how it was in ‘80s when I lived here. The alternative scene was grunge rock in the ‘80s. Grunge was a breakaway from music as a lot of people understood it, but that was kind of it. Except for a few quirky little drag bars here and there, there was not an as well-supported underground scene. It existed, but there are so many more venues now for artists in Seattle. They’re being nourished. There are a bunch of organizations that give out grants to dancers and performance artists. The dancer scene has a really great support system. When I talk about alternative, I’m talking about stuff like what Wes Hurley is doing . . . Waxie Moon and Capitol Hill Web Series. Kind of an offbeat, quirky, gay, queer, straight, lovable freaks who don’t fit in theme. It’s the cross pollination that has grown a lot in Seattle. It’s really developed a lot in Seattle.

I have to say that Scott Giampino, who’s the booker at the Triple Door, has been so instrumental in providing and booking burlesque and variety shows. That has helped nourish a lot of producers, such as myself, to take on bigger projects, and also to raise our production values.

Where did House of Thee UnHoly begin?

PS: It was originally done at the Catwalk in 2007. When I came back from New York in 2001, I was booking shows at Seattle’s historic basement, the Catwalk. It used to be Madam Peabody’s Dance Academy. It was the first club where same sex couples danced together in Seattle – that’s why I refer to it as Seattle’s most historic basement. I started producing shows there in 2002. For six years I was doing shows there: old school drag night, burlesque, variety, thematic parties

What is it about the Triple Door that makes it such a good choice for the show?

PS: The Triple Door was the Embassy Theater, which was the old vaudeville house. It has a deep history in variety and burlesque. It’s kind of natural to put shows of that ilk on that stage.

You were an Art History student?

PS: I went to Art School at Cornish, and then I transferred to New York, where I went to the International Center of Photography. And then I fell into the Pyramid Club performance scene and I never finished my degree. I was having too much fun.

My mother used to be a Docent at the Seattle Art Museum. She had always been an art educator. I’ve been going to museums since I was four years old. One of my favorite pieces of art is Robert Rauschenberg’s Monogram – it’s at the Modern Museum in Stockholm. My grandmother used to take me to see this goat all the time. I love history, artists, culture

Do you think of yourself as a feminist, as your work as feminist?

PS: I do not like the word feminism because that puts women over, right? I’m not interested in either gender being over another gender. I’m absolutely supportive of women in the arts, business, and in music. That’s why it was so important for me to have female musicians and singers in my show. I’m really excited to have Kathy Moore, who just serendipitously ended up in the show last year. She’s an amazing guitarist.

How did you go about selecting performers for the show?

PS: When the idea first came to do the show, I was just going to hire a cover band to play the rock and roll music. But I was in a band and we wanted to do the music. I was doing a project with Lily Verlaine and I wanted her to be in it. I wanted Indigo Blue to be in it. She had her act to “The Lemon Song” that she did at a book release for I Heart Led Zeppelin. I wanted her act to be in House of thee UnHoly. Over the years I’ve hired different people to participate in the project who are a good fit for the project, and who work well in an ensemble environment. There are 21 people in the cast. All those relationships matter. Not all personalities do well in a 21-person project. Some people didn’t work out personality-wise; some people needed to move on and do other things, so they were replaced. Some people moved. I’ve been really excited about every new hire that’s happened. The show has just gotten better, and deeper. The core group that’s in there. . . their relationship to the production gets just deeper and deeper.

What about the music? Why Led Zeppelin?

Mike Stone is our drummer, and he can play really heavy duty, like the drum solo from “Moby Dick.” And then he can do the most eloquent cymbal brushes and flourishes during fan dances. They make the performance that much deeper. He’s a very nuanced drummer. His sensitivity to what is going on onstage is exciting. It made me a little teary-eyed during a part of the show last year. 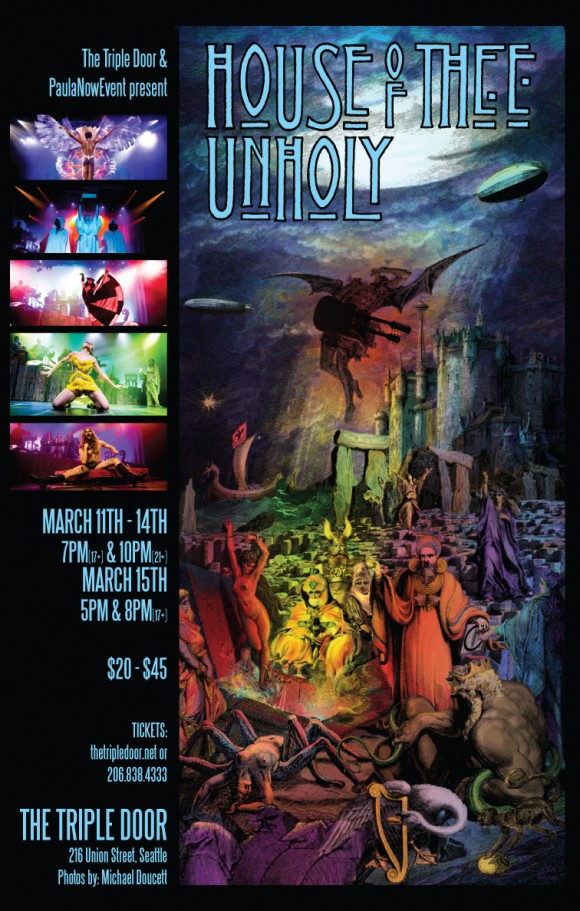 The Huffington Post referred to the show as rocklesque. Does that fit?

PS: I think so. I view it as a rock and roll, theatrical spectacle, and rocklesque is a good way to view it. Burlesque can also mean to make commentary on, or to satirize. It actually has a lot of meaning people don’t attribute to it.

Do you think of the ’70s as the last free decade?

PS: It was the most excessive decade of the 20th century. It was sex, drugs, rock and roll, free love. . . People went from the ‘50s to ‘60s; the ‘60s were the halfway point. Men looked like women and there was a lot of hairspray. In the ‘70s hair was allover the place. There was androgyny. There was a lot of mystery about sexuality. People were sexually very free – this is pre-AIDS. People were exploring. There were no consequences in the 1970s. People were doing psychedelics and heroin and cocaine, speed. I tried to bring some of that excess onto the stage.

Will you have Indian dance in the show?

PS: Douglas Ridings has been teaching Lily Verlaine Odissi. He also performs Butoh in the show.

There are three dances inspired by the art work from Led Zeppelin album covers. You don’t have to be a classic rock know-it-all to enjoy the show. There are so many different elements to enjoy.

When was your last performance in it?

PS: The last time I performed in it was 2010, then the show didn’t happen for two years, and I brought it back last year. I stepped into full-time Creative Director. It’s been exciting to have other people do my parts in the show. It’s helpful for me to watch the show, now that I’m not trying to occupy (three) very big hats. The production has benefited from it greatly.

Was it difficult to find someone to take your part?

PS: No, we have so many talented people in Seattle. I knew what qualities I wanted. I was able to bring in Tori Tiara, because I wanted the California girl. I wanted that innocent California girl, so she got to fill that role. It was super fun to bring in Jody Kuehner (whose alter ego is Cherdonna Shinatra), to come in and be the queen bee. And she’s a fierce Viking.

Any people you are looking at to add next year?

PS: I have one dancer who is not going to be available next year. We’ll see! I will need an amazing tassel twirler. I’m hoping to bring Fancy Chance from London because she is a phenomenal tassel twirler.

How would you describe this year’s show?

PS: It’s an epic, psychedelic rock and roll spectacle. Paul Strong from the Triple Door has been doing the lighting, and the lightning now has a very distinct personality, and I see how much he has contributed to the show. The colors are very much based in the chakras. Meditation and yoga were really popular in the 1970s. The Beatles had studied meditation with the Maharishi and came out with Sgt. Peppers in Nehru jackets. That really helped bring the East to the West. The show carries the whole chakra with it – reds, yellows, blues and greens. It’s a pretty intense color palette.