“Manchasm” was the song that introduced me to Future of The Left. The song, and others such as “The Hope That House Built,” “Real Men Hunt In Packs” and “adeadenemyalwayssmellsgood” off their 2007 debut Curses!, made me ask, where have you, you beautiful dirty steep music, been all my life? The answer was in Wales, and spun by a band who wanted to invade discriminating music fans the world over. After Curses!, came Travels With Myself and Another, an album that trampled my mind with “Arming Eritrea,” “Chin Music,” “I Am Civil Service,” and “You Need Satan More Than He Needs You.” Then I got to seem live in Seattle in 2009 (They’d also played the Capitol Hill Block Party and I believe they’d had one show at the Showbox prior). It was overwhelming and overpowering.

When I talked to Andrew Falkous, Future of The Left founding member and guitarist/singer/songwriter earlier today via telephone, Future of The Left was traveling through a storm in the Rocky Mountains. Nervous because of Falkous’ visceral singing style and tormentingly creative lyrics, instead I was at ease as I found him entirely engaging. As the leader of a band based in Wales, it’s a surprise that Andy Falkous is not from Wales. He’s a transplant to the area from Newcastle, so his accent still carries that Geordie attraction, with a little – and equally attractive – Welsh intonation mixed in. Falkous relocated at the age of eighteen to Wales to study Journalism, Film and Broadcasting, and though he has written articles for The Guardian, his focus remains on lyrics and fiction writing. I look forward to reading his fiction but Falkous said he doesn’t think his work is “good enough to share with the world at large yet. I’m pretty close – I’m getting there. Right at this moment my self-respect doesn’t allow me to release to the world that is only 75 % good.” 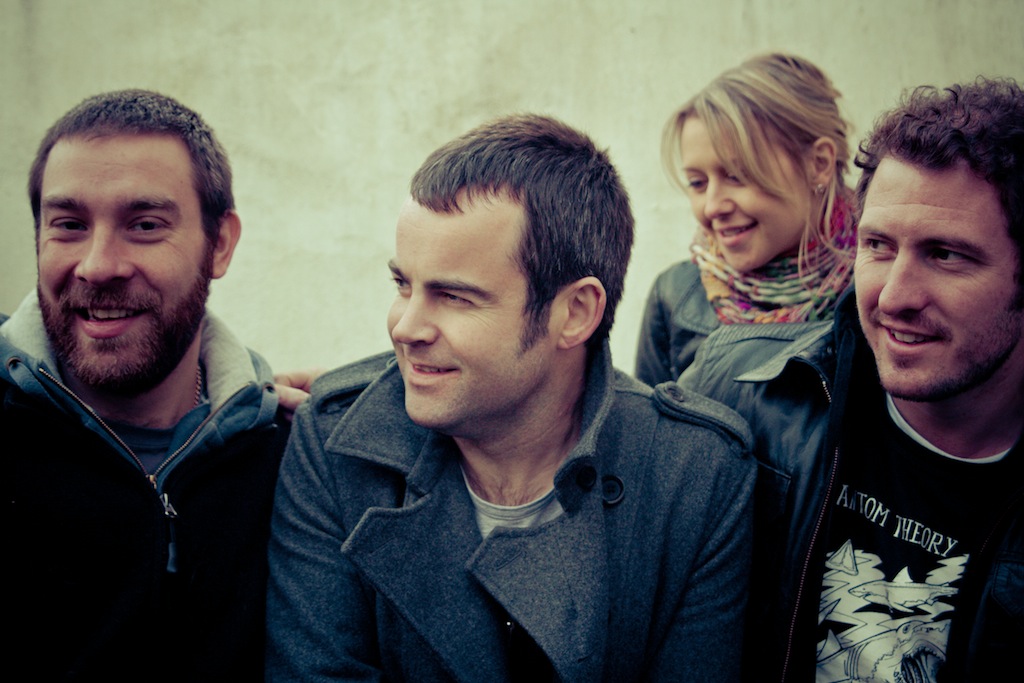 Between Travels With Myself and Another, Future of The Left gained another guitarist, Jimmy Watkins, lost bassist Kelson Mathias yet regrouped with the addition of bassist Julia Ruzicka. The lineup changes work. This is not a band in any kind of creative funk, and I agreed with Falkous when he commented, “Usually when a band changes lineup it’s because they’re in the desperate death throes. I would hope that it was exactly the opposite case with us.” Falkous knew Ruzicka “from the band she was in, Million Dead,” adding, “She seemed the right choice. She’s easy to write with – she’s a fantastic performer and also she’s an adult. She brings organization to our mess and our chaos.” With the addition of a female musician to the originally male lineup, I wondered what the reaction of male fans has been to Ruzicka? Some people are dismissive in a sexist way. Some people are rather at the other extreme, if you get my meaning. I hope that we’re not really the kind of band who would attract that mentality.”

Future of The Left’s lyrics look something like this:

She’s got a lot of pickled onions, hanging from her thighs – “The Lord Hates A Coward”

All he ever wanted was a detonator – “Manchasm”

Where were you when Russell Brand discovered fire? – “Notes On Achieving Orbit”

Initially I thought of many of the lyrics as code or perhaps they were describing something I just had no clue about. That’s still possible. There’s odd humor in Future Of The Left’s lyrics, and, along with the music they always create an unsettling yet anxiety decreasing vibe. It’s kind of like musical self-harm. It makes sense that there might be humor alive in this band, as Watkins actually does stand-up, with Falkous leaning in that direction as well: “It’s something I’m working on. Jimmy has a kind of lack of shame which allows him to get onstage even without a script.” For comedy, Falkous is drawn to “classics like Bill Hicks. Louis CK. The British comic Stewart Lee is fantastic. He has a very slow style but he’s fantastically clever. A lot of Armando Iannucci, who wrote I’m Alan Partridge and The Thick of It. An absolute genius. I would recommend it to anybody to check out The Thick of It or the film version, In the Loop. It’s satire in the true sense, but it also includes some of the most fantastic swearing you’ll ever come across.” Like creative swearing, I asked? “ Swearing could save the world, as far as I’m concerned. Good swearing brings people together,” responded Falkous. 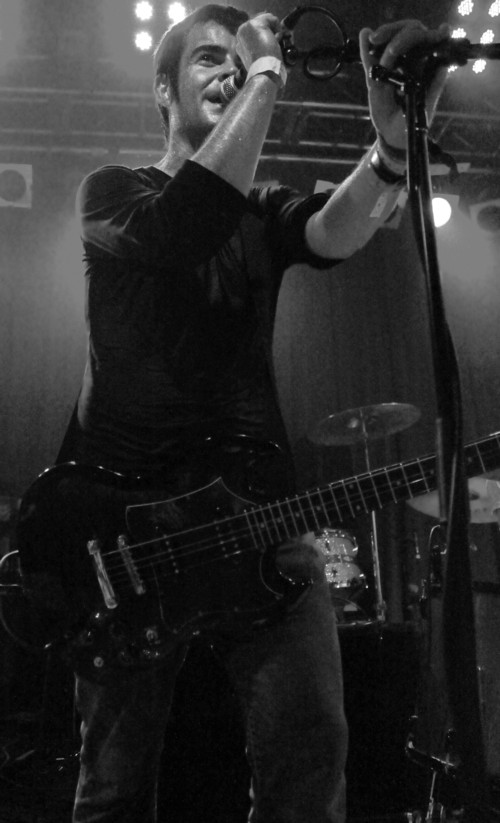 Andy Falkous of Future of The Left – Neumos, 2009 – photo by Dagmar

Falkous’ singing usually growls along, but he’s also able to sing in a more traditional way. Evidence? Take “Sum Of All Parts,” a song’s style I wondered if they’d repeat? “There’s no plan. In the future there could be campfire ballads with farmyard animals. You never know. I might have a head trauma in the next few months and end up focusing on topics I previously would have found repulsive. Let’s go where the Muse takes us. I do mean the Muse and not Muse. Very different. To readers: wherever you’re going, don’t let Muse drive.” The Muse of Andy Falkous brought us a track called “City Of Exploded Children,” off the new album. I thought those were real bagpipes, but when I asked Falkous it turns out it’s “a guitar which recreates the bagpipes. We were just experimenting. I have a love-hate relationship with bagpipes. I wanted to create an impression of a battle of the opposing clans, marching over a hill just about to clash. It sounds like – especially at the end – waiting in the trenches for the final conflict.” When I asked him what his favorite track off The Plot Against Common Sense is, he told me, “I love ‘Cosmo’s Ladder.’ We’ve been trying to do a decent B-52s impression for many years. That song achieves it. I don’t know, it [a favorite] changes all the time. I’m very proud of “A Guide to Men” even though it’s really impossible to play live – unless we had seven keyboards.” Falkous expanded by telling me that “picking a favorite is difficult. It’s like picking a favorite child. Certain songs would end up psychologically bruised or a meth addicts if you made the wrong choice. I would think “Notes On Achieving Orbit” at the moment. It manages to go on for five or seven minutes without getting boring. And I think lyrically it’s in the place it needs to be – direct.”

Andy Falkous is a history buff. He loves biographies. Turns out one of the United States’ Presidents, Richard Nixon is a favorite. “Nixon is fascinating. The balance of achievement and power, but at the same time that huge insecurity and the desire to prove people wrong. . . Someone like Kennedy didn’t have that complexity to me. Watergate to me, in particular is fascinating.” He also likes reading about ancient history: “There are some fantastic podcasts out there, like The History of Rome, which starts off a little unsure but by the end it’s as much of history of Rome a layman would ever need. I love history in general, military history in particular. I’m an eleven- year-old boy at heart. . . Fascinated with the notion of battle and the factors which bring humans to that point time and time again in history. The book I’m reading at the minute is about warfare through the Napoelonic period. Really cool. Jimmy doesn’t believe I’m actually reading it. He thinks I’ve got a comic hidden in there somewhere. I’m pretty much (into) anything except maybe the Industrial or Agrarian Revolutions. Textile factories or Waterloo? I’ll choose b. I ‘m heading to Stalin next. That’s my next port of call – all the light, chirpy characters with a great sense of humor: Heavy irony alert.”

Some ancestral information regarding Falkous: he counts Guy Fawkes, the key figure in the Gunpowder Plot of 1605, as a relation. The surname Falkous is “the Germanic spelling of Fawkes, so he [Fawkes] would be a distant relative. I only found that out recently. It’s got a certain caché. He was definitely a man who sought to shape history, you’d have to say that for him – even if it did end in a painful and inglorious failure.”

Two recent high profile events occurred in the United Kingdom, and I needed to know what Falkous thought of them. Number one, The Royal Wedding: “I think it’s lovely if two people in love get married. It’s very sweet, the actual wedding itself. I don’t think I was in Britain for it, which was something of a net positive for myself and William and Kate. The expenditure of tax dollars on the wedding of the super rich is incredibly obscene. Beyond that it would be mean spirited to pour scorn on the effective modernization and rebranding of the royal market. Good luck to them.” Number two, the closing ceremonies of the Olympics: I don’t even know if I have the words. The opening ceremony, even though it was ridiculous, had a certain beauty to it. I think the closing ceremony was what we all would have expected. If somebody had said the ceremony was going to be that crass and that badly advised,[with] the kind of music you’d get if you went to a work colleague’s birthday party and they had to invite all their slightly stupid relatives along. With the Spice Girls on those taxicabs, just driving around and around. There definitely wasn’t an environmentally friendly message. The waste of gasoline was quite galling. “ True. And that Queen tribute was just weird. “That was Brian May and his protest about badgers. You couldn’t make it up. Hey guys, let’s get Brian May to come along and say something about badgers, by means of a badge.”

Andy Falkous, the man whose music and performance will alarm you with its volume and anger, has a soft side. I came across a video of Falkous saying goodbye to his pet cat before going on tour, and I asked him if he still has this adorable cat. “Yeah, Chicken. She’s with the neighbor for the month. It was filmed for posterity in case anything happened to her when I went away. She’s a character. She’s a furry pain in the ass but she’s also genuinely loved. She is missed. Julia is thinking of making a Skype call so we could have a conversation with her.”

—
Future of The Left play Neumos on Sunday, November 11th. All ages/7 PM.