Swans are not dead. That’s what the band’s MySpace account states, and from their new CD, My Father Will Guide Me Up a Rope to the Sky, they thrive, pound and astonish. Singer and writer Michael Gira wants you to know this is not a reunion. The lineup this time around features two founding Swans members Gira and Norman Westberg, plus bandmates from Gira’s other project Angels of Light. If I were going to make a list of my favorite CDs of 2010 My Father Will Guide Me Up a Rope to the Sky would surely rank way at the top. It’s unsettling in ways that Swans’ earlier music is. Gira’s vocals are low and terrifying. I like that. I talked with Gira (who’s got a wicked sense of humor) about the new album, how he decided to have his daughter sing on the track “You Fucking People Make Me Sick,” and his experiences as a tearaway in Europe.

How did you decide the songs you put on this CD were Swans’ songs?

Michael Gira: It wasn’t so much the songs themselves as the way that I decided to record them and arrange them. Just getting a song together is a miracle these days. I had this collection of songs, say ten songs, and I had this band for a long time called Angels of Light. I’ve been thinking, over the last five years or so, of wanting to make more overwhelming, static, electric guitar music. And I used the songs as fodder to reactivate Swans, which is what I wanted to do in my secret mind. The first song, “No Words/No Thoughts,” that’s written specifically as a Swans song. “You Fucking People Make Me Sick,” that’s also a Swans’ song – but the others were just sort of written along the way.

You have your daughter singing on “You Fucking People Make Me Sick”. How did that come about?

MG: Yes she’s singing on that. Devendra [Banhart] is singing the lead vocals. That song had an odd genesis. It’s a collection of random loops and sounds. I was going to make a transition piece on the record, with no title or anything in mind or anything, and the more I added to it I thought, this is becoming something. All it needs is a little nursery rhyme in the midst of this. I went home and I was distractedly staring at the computer, looking at these fancy music websites. I started thinking about how I’d like to either murder or rape most of these children. So I wrote the lyrics from the point of view of an obsessed stalker. I was singing it and I thought, it doesn’t sound like me, I sound like Devendra. I called Devendra and told him the title and he laughed and asked if he wanted to sing it. He said sure. So I had him sing instead of me.

How’d you find him?

MG: Under a rock I guess. A while ago my wife was playing drums in a band called Flux Information Sciences and they were in LA. This was a loud, noisy band and somehow Devendra was the opener. My wife’s an aficionado of Americana, and heard his voice while she was smoking a cigarette outside when they were soundchecking. She went and talked to him and got this CD-R which is barely audible. She brought it home to me and I was astounded. It’s like going up into someone’s attic and finding this hidden trove of 78 recordings. I wrote him a long letter and he moved to New York to be on the label.

What’s pleased you the most about the new album?

MG: I like that it’s leading on to something else. I have trouble hearing my own music when it’s done because it’s reversed in so many ways. It’s like a dead cow in the middle of the road. It’s not really vibrant anymore. When it’s finished it’s exciting – I can recite in my head and I don’t have to listen to it anymore. It goes from writing the songs, working on them over and over, and thinking about how to arrange them, recording them, then mixing. By the time you’re done editing and mixing them it’s just a cycle. I become more interested in how to arrange and play the songs live. I’m not very faithful to recorded versions.

I read an interview with you where you talk about the audience as victims in a live show.

MG: I’m a victim too. You create a beast of sound and I just want it to pummel your body into submission until you see God. The audience comes along for the ride. In the early ‘80s there was quite a hostile relationship between us and the audience. We were met with either indifference or scorn for the first five years. It was not a love-hate relationship, it was a hate-hate relationship. In a way it’s a source of energy too.

You ran away to Europe as a teenager?

MG: I was living in Germany, working in a factory when I was fifteen. My father had placed me in this factory as sort of a test to discipline me – if you’re not going to behave you’re going to work in a factory. He was in Germany – his second wife was German. He was a business executive. I could go to this school in the Swiss Alps or work in the factory. I did that for a year and then he said, you’re going to school. And I ran away. I hitchhiked through Germany down to Yugoslavia, Greece, and Turkey – I was running out of money so these older hippies I was with knew some people in Israel. We spent our last money going to Israel. I spent a year in Israel panhandling, selling my blood, working in a copper mine. I finally got arrested selling hashish and spent three and a half months in jail. Then they booted me out of the country.

The song “Jim” is just beautiful. What’s behind that song?

MG: Thanks. I was thinking about my friend Jim [J.G. Thirlwell] from the band Foetus. He sent me some of his music. I was overwhelmed by what a genius he is. It was an inspiration to keep going. He’s a similar age and we came up together. I wrote it based on memories of us and our time together. It’s an homage to him.

Have you had any vocal training?

MG: No. I know how to sing from my stomach and not my throat. Jarboe taught me that. I used to destroy my throat every night. I used to smoke two packs of Camels unfiltered a day. I have a lot of lung power just from singing in really loud rock bands. I do vocal exercises but I don’t really have any training.

The portrait Simon Henwood made of you is amazing.

He’s one of my very best friends. I’m proud of him. He’s having a show in Paris and London. It’s a two-person show with portraits by Francis Bacon.

He took a headshot of me after we’d been carousing all night. That’s how I looked the next morning. 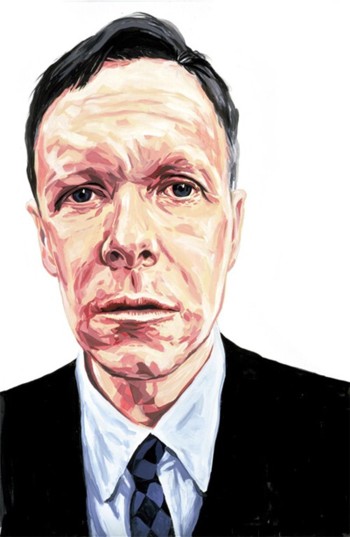 Do you have any memorable injuries from performing onstage?

MG: When I was younger. I knocked out half of my front teeth on the microphone. I used to break my ribs. I used to have to wear an ACE bandage. I was always throwing myself on the ground. You don’t really feel it when the music’s inhabiting you – and then later you pay the price.

No jumping into the crowds.

MG: I never did that anyway. [One time] in Chicago everybody else was listening and moving but they weren’t slamming into each other. There were these four imbeciles moshing. I almost stopped the song but I got their attention and grabbed one of them by the hair and yelled at him to stop. He finally stopped. I don’t want to be a party to that – it’s so ludicrous. It’s such a knee-jerk, Pavlovian reaction at this point. It means nothing. 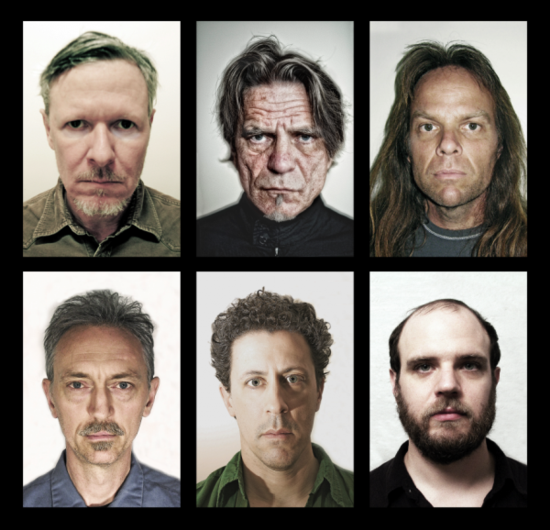 Swans will appear in Seattle for a show at Neumos on Saturday, February 26th.