British rock band Motörhead release their twentieth album in the States, The Wörld Is Yours on EMI, February 8, 2011. It’s a solid work that maintains the distinctive and roaring Motörhead sound, and I appreciate that more than I can say. Known for fast and hard songs, Motörhead’s also accomplished at slower blues inspired songs that give singer/bassist Lemmy’s voice a shot at showing another side of his vocal depth. I talked with the über cool Lemmy last week ahead of Motörhead’s upcoming Seattle appearance (February 4th at Showbox SoDo) and I found him highly intelligent, possessing a wonderful sense of humor, and just awesome. As a fan, I am pinching myself. Read on about how Lemmy got expelled from school, what he thinks about British Royalty, the documentary Lemmy, and more.

Did you write, like poems, when you were a kid?

Lemmy: I started doing that for an album – around 1969. I’d never written anything before that. I was good at English, but that’s about it.

So you were good in English at school?

L: I was the teacher’s pet. I took the advanced graduation exam when I was fourteen and I passed it. But then I didn’t sit the graduation. I never graduated because I got expelled.

Was that because you hit your headmaster?

Good for you for hitting back.

L: I believe in smacking a kid around the head. Kids don’t understand anything else – I know I didn’t. You can talk to kids all you like and be nice and polite but they’re kids, they don’t give a shit. I had a deep cut on my finger and it was hanging off, it wouldn’t heal for ages. It was just starting to heal. I had a bandage on my finger and I had to have two strokes of the cane [as a punishment]. So I asked if I could have two on the other hand. But, whack he opened it up right again and it started bleeding. When he hit me on the other one I took it up and smacked him with it. It seemed fair.

It does. . . Many of your lyrics show an interest in horses.

L: I was going to breed them.

Do you ever think about working with them now?

L: I’ve barely got time to work with all the stuff I do in the music business to start with horses as well [unless it was] a singing horse.

That would be cool actually. 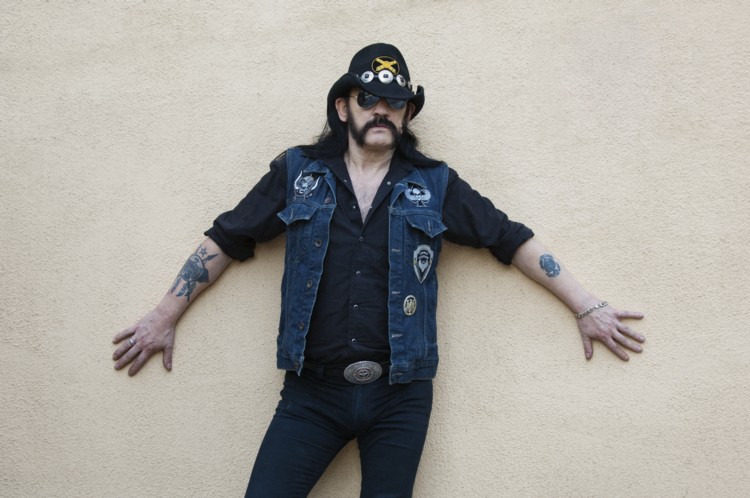 Where did you film the new video for “Get Back in Line”?

L: It’s a building in the East of London in the business district. That’s why the skyline is so bloody awful – because they haven’t built the tall buildings yet.

What kind of things do you like to read?

L: I read all kinds of stuff. There’s a guy called Ken Follett – have you read him?

I haven’t yet – I think I have a couple of his books.

L: Do you have The Pillars of the Earth? That’s a really good one, with a couple sequels if you like him. The Eye of the Needle is good too. The Man from St. Petersburg is especially good.

Where did you get your first Iron Cross?

L: I’m not sure. I’ve had a lot of them for a long time. I think somebody just gave me one. I was in the Rainbow in Hollywood and somebody gave it to me. It’s a First World War one.

You’ve also got a really cool one with blue on it.

What drew you to collecting German military memorabilia?

L: That was the last regime – apart from South America – that was really flash about it with all the pomp and circumstance. All these guys carrying daggers – if you were the locomotive driver or an air raid Warden, you carried a special dagger, just for your service. It was really strange. Those days it was quite normal to carry a dagger if you were in the army or the air force. It’s an interesting culture, Germany. On one hand you’ve got Beethoven and Bach and Thomas Mann, and then it comes up with Hitler as well.

Are there any items you’re looking for?

L: If you collect anything there’s always one item you haven’t got. In my case there’s about three hundred. A lot of them there’s only one of. I’m never going to get those.

You’ve got references to Valhalla and Midgaard in “Voices from The War,” are you interested in Norse mythology?

L: The gods are laughable. Only a few years ago we were worshiping somebody else. As far as the scale goes, five minutes ago we were worshiping Thor, or Mog. I think it’s really odd that people get started on something and then switch to something else, and they’re just devout about that. Religion’s a very overrated thing. It’s responsible for nearly all the genocides in history.

If you had to pick one what’s the most interesting?

L: Buddhism – but you have to stay still for too long. I’m too jumpy for that [yoga & meditation].

I was reading that your mom played guitar?

Did she teach you to play guitar?

L: No, she couldn’t play guitar like I play guitar. Me and a kid next door, he knew a few chords – you know how you do when you hang out with people and they teach you something.

Was it weird doing the video for “Serial Killer”? You had to stare right into camera.

L: There’s a little a reflection of yourself. It’s like your own personal monitor.

Have you seen Lemmy, the documentary about you?

I think it’s in Seattle a week after you play.

L: We’re the trailer for the movie. It’s okay, it wasn’t too embarrassing. I didn’t have to sneak out of the theater before the lights came up. I think they did a pretty good job.

L: I failed. It was obvious he didn’t have the attention for it so I gave up. About a month later he was in Sex Pistols. He really wanted to learn – he was never difficult with me. He was a nice guy with me. I was sorry for him because Nancy Spungen killed him. I saw them together. He was just under her thumb. She introduced him to heroin.

Why do you think so many women want to change their men?

L: I don’t know – it’s an interesting phenomenon. It’s because they want them to be theirs exclusively. I think it’s a security thing. I think a lot of things with women are insecurity – don’t you find?

L: They don’t want anybody to take him away so they make him unattractive. I don’t know how they live with the unattractive thing they’ve created. That’s what bothers me. Especially these guys wearing cardigans after they get married. No guy ever wore a cardigan of his own idea.

Are you a royal watcher? What do you think about them?

L: I think the royal system is better than presidents. I’ve been over here for awhile, and I’ve noticed. I think the royals give you a chance to put on a good parade. I think they do a very good diplomatic job. You wouldn’t want to do their job, believe me. Taking in all that terrible local music, meeting all those handicapped children. It must be bloody awful – a severely depressing job. They’re raised to do it, from birth.

Can humans as an entity redeem ourselves?

L: It’s too late. We’ve not even begun to redeem ourselves.

The song “God Was Never on Your Side” really speaks to me. Do you remember writing that one?

L: Oliver Cromwell once said “Every man who wages war believes God is on his side. I’ll warrant God should often wonder who is on his”. I thought it was a good little quip. Oliver Cromwell wasn’t given to a lot of joking. By all accounts he wasn’t a stand-up comedian.

I’m actually about halfway through a book about Cromwell.

L: He wasn’t exactly the life and soul of the party. He was convinced of his mission, which is always mental. Slaughtered so many so Catholics in Ireland, it was unbelievable. He did that in the name of God. It says Thou Shall Not Kill. It’s really strange.

What’s appealing about an umlaut?

L: It just looks mean. I pinched the idea off Blue Öyster Cult. Then Mötley Crüe pinched it off us and it goes on and on . . .

You’ve also got a lot of lyrics involving dogs. Do you have a favorite?

Did you have pets when you were a kid?

L: I lived on a farm [in Wales]. I had a couple horses and about twenty cows, fifty sheep and a bunch of dogs.