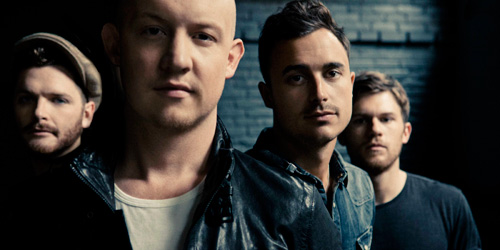 The Fray – photo by Danny Clinch

Piano rock band The Fray has been known to make a few hearts skip a beat or turn the emotional waterworks on.  The same is true for their newest release Scars and Stories, which debuted  on February 7th.  This is the third studio album for the quartet, who found mainstream success with popular singles “Over My Head (Cable Car)” and “How to Save a Life.”  Their latest hit single “Heartbeat” runs in the same tearjerker territory that The Fray’s other singles roam in.  However, there is a remarkable back story to both the single and the album that drummer Ben Wysocki was kind enough to share in a recent phone interview.

Wysocki revealed that shortly before recording Scars and Stories, the band took some time to travel the world.  When they regrouped, each member was fresh and inspired by their experiences, many of which influenced the music they composed for the new album.  The album’s first single, “Heartbeat” is a prime example, inspired by lead singer Isaac Slade’s travels to Rwanda where amidst a dire atmosphere, he encountered persevering individuals.  “I feel your heartbeat…if you love someone, you love them all the same,” Slade croons on the single.  Another track on the album, “Munich,” was written after an encounter in said city, while “48 To Go” was inspired by a road trip.  As a whole, Scars and Stories is meant to reflect the adventures of life that give us incredible stories to relate.

Besides chatting about the new album, there was a question about The Fray I was all too curious about and absolutely had to ask Wysocki.  According to the *very* credible source of Wikipedia (insert heavy sarcasm), “the members of the band first claimed that they found the name suitable because they frequently quarreled about the composition of the lyrics in their songs.”  When I asked Wysocki if there was any truth to this claim, he laughed it off and set the record straight. Truthfully enough, all four founding members were relatively young when they first formed The Fray. ike any other bands who are both young and contain sibling members (Isaac Slade’s brother was formerly the bassist), The Fray suffered from occasional rifts and lineup changes when they first started out in 2002.  Fast forward a decade, and the current five members of The Fray have mellowed out and matured.  Case in point: The travel inspiration for the new album was often based on individual members’ experiences, yet they could come together harmoniously on a single record.

The Fray is currently wrapping up their North American tour which will bring them to Seattle’s Paramount Theater on February 28 before they take a month’s hiatus.  Check out their music video for the single “Heartbeat” below, and don’t miss the show!