France’s Jamaica, a duo made up of Antoine Hilaire and Florent Lyonnet released their debut LP No Problem just this year. Hilaire (guitar/vocals) and Lyonett (bass/vocals) offer traditional, string driven pop music of clarity. There are no synths to dirty the waters here. You can hear evidence of this on their MySpace – I’d point to “Short and Entertaining” and “I Think I Like U 2” as good examples of what I am talking about. They call back to the ’70s and ’80s in energetic and positive ways. I got to ask Antoine Hilaire a few questions about the band and the video for “I Think I Like U 2,” which (kind of) tells Jamaica’s story. 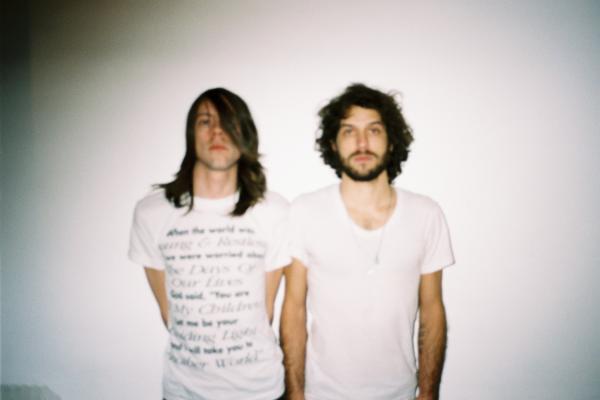 Jamaica – Hilaire, left & Lyonnet, right – photo by So Me

How did you two meet?

Antoine Hilaire: We met a party, thanks to our ex-girlfriends. We were really different but went further than the differences and became friends quite quickly.

You mentioned liking Two Door Cinema Club in an interview. What do you like about them?

A.H.: First, they took as an opening act for a really cool tour. They’re writing good songs and they’re young and successful, what’s not to like about them? Also we have to make amends for disqualifying their soccer team en route to the World Cup.

You also mentioned listening to 10CC before shows in an interview on YouTube. How underrated is that band?

A.H.: They’re probably known only for “I’m Not In Love” but they wrote tons of great music. They’ll be forgotten in history books because they lasted too long and put a lot of humour in their career. We open the concerts with “Dreadlock Holiday” because of the line “I don’t like reggae, I love it”.

What changes do you have to make in many of your songs for live shows?

A.H: They’re obviously more raw live since we can’t bring 20 musicians to play the whole thing. We stick to the production of the record but with more rock to it. Also, we made some of them longer because our album being only 37 minutes, you have to find tricks to last longer.

How did you get Igor Cavalera in the video for “Short and Entertaining”?

A.H.: We met him once or twice with his wife, they have a band together called MixHell. They’re the sweetest people and the directors, Jeremie Rozan and Martial Schmeltz are friends with them. It seemed natural to invite Igor for the metal oriented video we were doing. The extras were freaking out, they even liked our music in the end.

In what ways is Jamaica different from other popular French music?

A.H.: What people know about French music is mostly electro, besides Phoenix, and we play rock music. Also, I think we made a record that doesn’t sound like anyone, French or not.

Does Jamaica get mistaken for an American band, and is that okay with you?

A.H.: It’s a hidden compliment about the vocals, so I’m pretty happy with it. I took a great care in making sure the lyrics worked, helped with our producer Peter J. Franco. I think it also refers to the guitar driven pop music we’re playing, so we can’t hide the truth: we’ve indeed listened to a lot of US bands. Some people said it sounded like Weezer on testosterone, in a bad way. I liked that, haha.

How did the Breakbot remix of I Think I Like U 2 come about?

A.H.: We called him and asked to make it really quickly without getting paid. He said yes because he’s the nicest guy on Earth and we look a bit alike.

About the photos from your childhood on your facebook and in the video for “I Think I Like U2” . . . How old are you in the pix? Do you remember having them taken?

A.H.: I think I was 4 and Flo 6 on these pictures. I don’t remember anything before my 18th birthday, I have a really strange memory. But I do remember the sweater on it, it itched a lot. And my father used to cut my hair himself, I think it shows.

What are three of your favorite bands from the 80s and 70s? Why?

A.H.: We love Todd Rundgren because he’s an underrated genius, The Police because they were so slick and I’m really into Led Zeppelin these days, it helps me wanting to play bad ass before going on stage. More ’70s than ’80s definitely. Though, I don’t know why, all the new material I’m writing sound a bit like The Smiths.

You chose to write your lyrics in English – why? Would you do them in French?

A.H.: I don’t know how to write in French. I’ve tried many times but English is easier when it comes to punchlines and efficiency. French is more biased, plus it really doesn’t match high energy rock, unless you want to deliver a social message it seems. I’d add that I sing lower in French than in English, so it’s easier for me to spit the words out in Shakespearean language.

You opted not to use synths – how many instruments did this mean you two had to play on No Problem?

A.H.: Drums are programmed by Xavier, cymbals and hi hats are played by our live drummer David Aknin, Bent from the Belgian band Das Pop played epinet, Flo played bass and sung backing vocals and I played guitar, sung and added some piano and Wurlitzer.

What was the inspiration for “When Do You Wanna Stop Working?”?

A.H.: It’s the story of being harassed by work acquaintances or just people you barely know about their love life, their issues, etc. without caring at all. Everybody got a job with people trying to make friends, or just unloading all their stories in front of the coffee machine. It reminded Flo and I that we had to leave our day jobs to commit 100% to music.

A.H.: I’m a basketball and soccer newborn nerd and Flo rides bikes. The dangerous ones, without brakes.

A.H.: It was a joke about the guitar sound and violins on “Gentleman”, I probably opened the facebook page at the time we were making it. It can also refer to “Eat This”.

Which element of the “I Think I Like U 2” video would you like to see happen (more than any others)?

A.H.: The Billboard #1 must be sweet. We are grounded enough to see that happen and not freak out, I solemnly promise the industry.