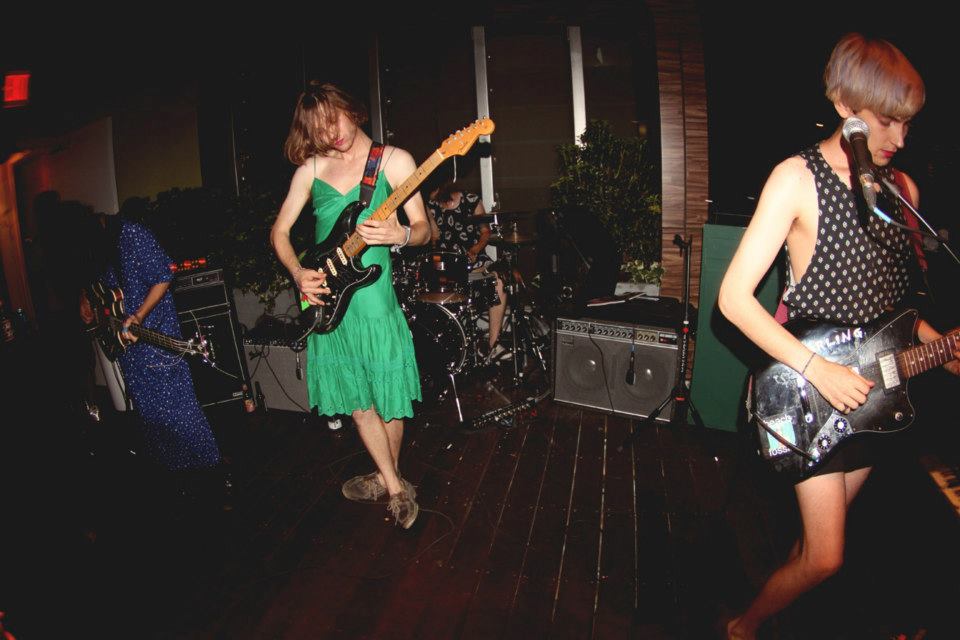 This is a conversation I had with Andrew Bailey, guitarist from Brooklyn-based four-piece group DIIV. He had already made it back to the East Coast, and this was his last night of summer touring before safely landing back in NYC.

We began the conversation by talking about Shilpa Ray and Her Happy Hookers, the band that Andrew was in prior to the formation of DIIV.

Now, I met you when you had crazy long hair and you were touring with Shilpa Ray. Are you not working with her anymore?

Andrew Bailey: No, I’m not really working with her anymore. She broke up the band after that tour. She wanted to get away from that heavy distortion rock band sound we had going and get back to a stripped down sound. No cymbals, sparse guitar and bass, tom drums instead of snare, etc. If you listen to her first record under the name Beat the Devil, it sounds awesome because the music is so bare and raw and acts as a platform for her voice, (which should be the focal point.) She realized that she had strayed from that dynamic, we had a few heartfelt chats about it, and I agreed she should move away from what we were doing as The Happy Hookers. I’ve played a few shows with her since then with different rhythm sections. And I helped record some of the demos for her next record. She took a break from music for a bit and that’s when I joined DIIV. I wasn’t expecting it to go as far as it has, so I haven’t been able to be a part of the next chapter in Shilpa’s career That bums me out because I think her next record is going to be amazing. Damn, that just got me nostalgic for Shilpa. I love her and miss her a lot.

Also I miss that hair. I cut it for my grandma when I visited for Christmas. She’s old school and hates long hair.

So you joined DIIV when Shilpa was taking a break. Can you remember what you were anticipating in that transitional period? I mean, was your priority still music?

AB: Not really. I never planned on being a musician. It’s just something I wanted to do for a hot minute before I decided I had to start being a grownup. So when Shilpa broke up the band, I went through a bit of time where I thought, “Well that was fun. Now, I have to like, be an adult and start a career and all that.” But then Cole [Zachary Cole Smith, guitarist/singer] found out about Shilpa’s band dissolving and hit me up right away being like “Andrew, I want to start a new band and you’re gonna play guitar.” So I was basically thinking, “Well, fuck it. Why not? Might as well have fun playing shows at Brooklyn DIY spots while I figure out what I want to do with my life.”

I still have no idea what I’m going to do after music.

Right, the DIY spots. I keep hearing about this place 285 Kent. That’s where you shot your music video for “Doused,” right? What’s the story with that spot?

AB: Yeah, we shot the video there. It’s the chill spot. I love playing there. After Market Hotel got shut down, 285 became the new best DIY spot in Brooklyn. I can’t think of any reason why. I guess it’s close to the Bedford L Stop. It’s a big room. The bartenders are extremely attractive. They have a Nintendo in a little room by the bathroom that the cool kids are allowed in. I don’t know.

It used to be hot as balls playing there but then Todd P. installed an AC unit. Before that, there were shows we’d play where I was convinced I was going to faint. We played there at like 4 a.m. on new years. I thought I was going to die onstage and I was completely content with that.

Speaking of dying onstage, I saw you guys at SXSW at some club in East Austin this year. You looked like you hadn’t slept in weeks. I remember we didn’t get to hang out, you were so beat.

AB: Haha! Yeah. Sorry about that. SXSW kicked my ass. It was just so hot and we played an absurd number of shows. That day, I woke up in a hotel in South Austin and stupidly started drinking wine instead of water. Then I couldn’t get a cab to save my life. So I walked all the way downtown – meanwhile still getting wine drunk. We played two shows BACK-TO-BACK at noon and 1 p.m. Then we had to sit around for mad long – drinking beer at Spiderhouse. Then I saw you at that show. My body was completely void of nutrients. The amp didn’t work at the venue, so Cole and I plugged into the same amp – sounded like ass. Then everyone was like “All right let’s party!” And all I wanted to do was eat a bottle of vitamins and curl up in a ball.

But yeah we’re doing SXSW again this year but we’re not gonna play so many shows again. That was our vibe back then. In NYC too, we would just play as many shows as possible. Fuck it. Multiple shows in one night. Plus I was working 9-5 at the time so it was insane. Worth it, but insane. Now, we have the luxury of being more selective. We might even have a day off at SXSW – which would be awesome ‘cause I used to live there. I have friends I never get to see when I’m there ‘cause I’m always running around, playing shows.

Cool, so you’re already thinking about traveling in the spring, then. And Holy Moley, you’ll be in Europe for the entire month of November.

It’s amazing how your involvement in DIIV went from “Might as well have fun playing shows at Brooklyn DIY spots while I figure out what I want to do with my life” to flying to Europe, to play gigs with groups like The Vaccines and The Raveonettes. And this all happened in just over a year. Pretty fast, no?

AB: Yeah – super fast! I had no idea. I have Cole to thank for that. He’s been in a couple bands that got to the same level of success and further, so he learned the game really well. He’s smart and played all the moves perfectly in regards to building a team of PR and label and manager and all that. The music too, obviously. But having good songs only gets you so far. It’s a complicated game and Cole is really good at playing it. I’m just lucky that he has me along for the ride. He was a dick to me in ninth grade but he’s made up for it ten-fold.

He was a dick to you in ninth grade, and now look! You guys get to be around each other for months at a time, around the clock. Do you all flow pretty well, traveling together? Who’s the cranky one?

AB: Yeah, we became friends in tenth grade. We all get along really well, which is convenient. No one’s “the cranky one” really. We take turns every once in a while. Cole has to deal with a lot of bullshit, so he stresses sometimes – but he’s cool about it.

A couple nights ago we had nowhere to sleep, and this chick we met at the show invited us to this party. So we went, but there was no party – just a few randos hangin’ out. But Devin [Ruben Perez, bass] and I were vibing, so we went in while Cole and Colby slept in the van. They got super pissed because sleeping in the van sucks hard. But then Cole came inside and saw Devin and me sleeping on a hardwood floor with an asshole dog kicking us in the face. So. . . Cole stopped being pissed. In some ways, that’s an example of how we keep from killing each other – living in a van for so long. Nobody in the band has ever been pissed at another member for more than a day at a time. We’re all water signs, we get each other.

I saw a photo of you guys performing in nice ballgowns. Do you charge extra for that?

AB: Wow. Yeah. . . that was a one time thing. Or at least so far. It was a Fader event for rich people on the roof of some rich people hotel in Williamsburg. So Cole went to a thrift store and bought us all dresses. We got banned for life from Roberta’s Pizza in Bushwick earlier that day. That day kinda sucked. I’d never played in a dress before and the sweat stains were gross. But, I love dressing in drag, I have sexy legs.

I have heard of a couple of people who thought that DIIV was not really a word at all, but an improper translation of 503 in roman numerals. Have you gotten that one yet?

AB: Yeah, a lot actually. I dunno. We’re all aware that the name’s kind of stupid. But it’s funny when people pronounce it “DIV”. What can you do? I feel like a lot of my favorite bands have stupid names. After a while, the music and identity of the band transcends the name. Nirvana? Led Zeppelin? Modest Mouse? Those names suck. DIIV is trying to join that club. If the band gets to a certain level, it doesn’t matter what you’re called, the name refers to you instead of what it literally means, which in our case is nothing.

So, you’ll be home tomorrow?

AB: I’ll be home tonight. We’re driving through Jersey right now. I have a bad headache. At the end of tour, my body just shuts down.

This is the point where I decided I should let him go. Something about having a bad headache, and feeling like your body is shutting down, and still committing to an interview with a music publication based all the way across the country – this is DIIV in a nutshell.