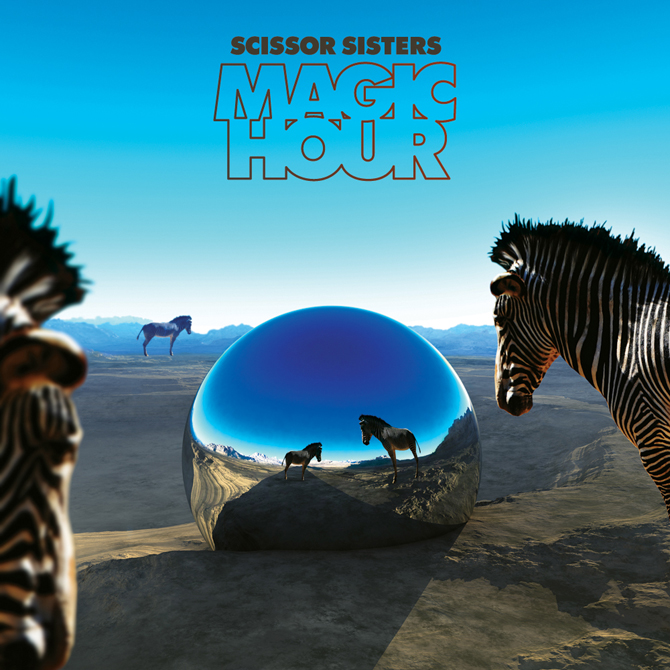 In an interview promoting Duran Duran’s song “A View to a Kill,” singer Simon Le Bon described it as “a proper disco stomper.” The phrase is apt for that song, as well as so many of Scissor Sisters‘ songs.

With the release of Magic Hour, Scissor Sisters have now created four passionate, alarming and adventurous albums. Scissor Sisters do what they want. They’ve managed to release albums of individuality and integrity. They’ve produced all their own albums, with very little co-producing. Going back to their first release to the newest album, they’ve balanced lovely ballads, “Mary,” “Might Tell You to Tonight,” “Skin Tight,” “ Inevitable” with racy and gaspingly great disco stompers, “Tits on the Radio,” “Paul McCartney,” “Any Which Way” and “Let’s Have a Kiki.” The band will always take a chance with sounds and do something you do not expect. Lyrics can be touching, hilarious, sexy and they’re always smart.

Magic Hour contains the variety of songs you’d hope from Scissor Sisters. Whether you prefer the softer, romantic Scissor Sisters or the harder Scissor Sisters, there’s plenty to love on Magic Hour, such as laser beam sounds! “Baby Come Home,” catches attention with the lyrics it’s a half past quarter to three and “Keep Your Shoes On” has a happening clapping beat and fabulous vocals intoning shimmy shimmy cocoa puff/I can’t seem to get enough, while “Shady Love” prances with a sexy rap. The album also includes two extremely inspiring gentler songs, “Year of Living Dangerously” and “Best in Me,” each one delivered without one ounce of saccharine. “Only the Horses” and “Self Control” fit me just damn fine. “The Secret Life of Letters” again emphasizes singer Jake Shears’ strong vocals, while “Somewhere” is so stirring. “Fuck Yeah” is intricate and beautiful synth rap. Yet what might be just my favorite song on Magic Hour is the aforementioned “Let’s Have a Kiki.” The lyrics are disarmingly funny and the tune is spiritually overwhelming. It calls back to the brilliant Scissor Sisters classic “Monkey Baby.” Every hour listening to Scissor Sisters is magic hour.

Magic Hour hits stores May 29th. If you don’t trust me, see what Josh Homme has to say.