Album Review: Fox and the Law‘s Stoned to Death
by Ira Leonard 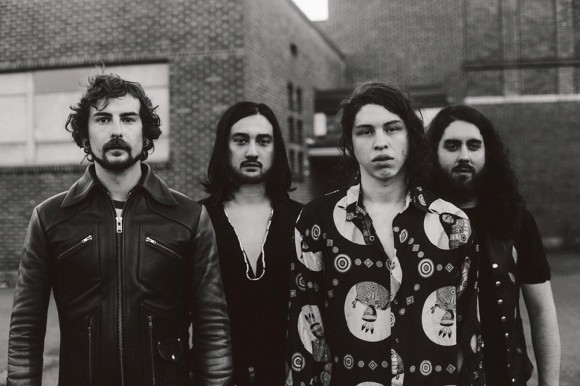 Fox and the Law – photo by Eleanor Petry

“You can’t beat two guitars, bass, and drums.” This oft-repeated Lou Reed quote taken from the liner notes of his 1989 classic New York album would certainly seem to be an audacious claim had it been made in the context of the current musical landscape, where stalwart, guitar-driven rock and roll has found itself relegated to the hinterlands of popular taste (particularly among younger demographics) in favor of electronic-based dance music. Though this shift has been apparent for some time, never has it been more so than at the 2014 Capitol Hill Block Party, which went very heavy on EDM and synth-pop, while rock acts found themselves largely marginalized. But there was still some thunder to be heard coming from the margins. Some voices in the wilderness who remember the days of loud drums, wailing guitars, and nary a laptop computer in sight. Among such voices, was the Seattle-based quartet Fox and the Law, who appeared at the festival in support of their upcoming album, Stoned to Death. This is a band that understands that “rock” is a verb as well as a noun and they have sired a sweaty, swaggering rock and roll record that (gasp!) actually rocks!

Fox and the Law consists of vocalist/guitarist Guy Keltner, guitarist Peter Williams, bassist Patrick Dougherty, and drummer Dan O. The ensemble opens Stoned to Death with an appropriately Zeppelinesque number entitled “Cheap Talk.” The song’s main riff, though relatively simple, achieves ample dynamic contrast through the use of palm muting the guitar strings while Keltner is actually singing and laying the affirming power chord declamations in between his lyrical phrases to serve as musical punctuation. Gradually the lead guitar unfolds a compelling background melody underpinning the falsetto vocal lead-in to the cathartically-rocking chorus. While there isn’t a guitar solo on this track, per se, there is a smorgasbord of tasty, blues-drenched fills bubbling right below the tune’s surface. To borrow a descriptor from the song’s own lyrics “It cuts deep like a knife through butter.” The next track, “Hot Water,” achieves the titular swampy fluidity through the use of a guitar flange effect recalling the best of the psychedelic era.

The Black Sabbath influence on Fox and the Law is undeniable, but because of Keltner’s high tenor voice, the Ronnie James Dio and Ian Gillan incarnations of Sabbath shine through most readily. As the modified twelve bar blues “Nod to the Devil” gives way to the stop-time guitar and drum interplay of “Let it Ride,” the band seems to be building to something big. They fulfill this promise on the album’s centerpiece “Emily.” After an extended, feedback squall of an intro that is equal parts Hendrix and Steppenwolf, anchored by Dougherty’s rock solid bass line, “Emily” takes the listener through several episodes that range from frenetic to grinding, and, at each stop along the way, treats the listener to some of the best lead guitar work on the record.

The album doesn’t let up during the back half, but it does find Fox and the Law a bit more willing to experiment. The song “Heatstroke” is something of a compositional globe-trotter insofar as it is introduced by a middle eastern-tinged chant which dissolves into classic British blues-rock riffery, before concluding with a Latin-inspired breakdown harkening back to Sticky Fingers-era Rolling Stones and their extended samba jam at the end of “Can’t You Hear Me Knocking” (albeit Fox and the Law’s jam is much shorter). Nothing on Stoned to Death could really be referred to as a “ballad” but the band does explore the quieter side of their sonic palette briefly with the acoustic guitar/female backup singer supported first verse of “Ripped Off.” Keltner and company subsequently return to the meat and potatoes blues rock emblematic of the first half of the album for the closing number “Don’t Want to See You Go.”