I’m getting this out of the way that I think Kasabian is one of the best bands ever, a band who’s released four albums that are too stunning for their own good. Their self-titled debut made a huge impact and from there Empire and West Ryder Pauper Lunatic Asylum roared along. Now they’ve got this monstrous beauty of an album called Velociraptor! for our pleasure. What got me going on Kasabian was hearing the song “Club Foot” about 8-9 years ago, and where I experienced the sinister rhythm the band created – they’ve kept that up. One of my musical heroes, Sergio Pizzorno, Kasabian’s songwriter/guitarist talked with me the other day. We talked about songwriting, his comedy work with Noel Fielding, and vampires. This Tuesday Kasabian returns to Seattle for the first time in approximately 5 years when they play the Showbox Market.

When you write songs how much are you writing with Tom [Meighan, singer] in mind?

Sergio Pizzorno: I think about that all the time actually, through the whole process writing Kasabian songs. Tom’s the singer so it’s vital that it’s in his range and it suits his voice.

Have there been songs he’s been reluctant to do, or you’ve been nervous to share with him?

SP: No, not at all. Tom decides – he will listen to the songs and he’ll say, I think that one you should sing. If he wants to sing them then he has first choice.

I was reading in another interview that Keith Richards is your favorite guitarist – is he still one of your favorites?

SP: Yeah, he’s obviously a great player but I think he finds holes in songs that no one else does. I think he’s quite special.

Kasabian always has interesting videos. What’s been the most challenging one for you?

SP: I suppose when we shot “Fire,” we did it in South Africa and it was a hell of a long way to go, and we did two fourteen hour days. But the video came out really good. 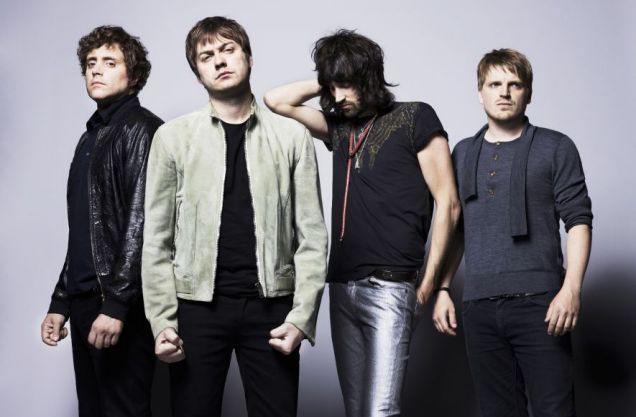 You and Tom grew up near each other?

SP: A mile away from each other, yeah.

So you knew each other before you were in the band?

SP: Kind of. We weren’t like best of friends but we knew each other from about the age of twelve or so.

Was there a different singer in the original lineup?

You’ve been working a lot with Noel Fielding. Where did you meet him?

SP: He came to a gig at the Isle of Wight and we just became really close. He asked me to do the music on his show. He’s amazing as a creative force; he’s incredible and really inspiring to be around. We had a great time doing that.

I’ve been listening to the music and I love it.

SP: It’s great because you can just have fun because it’s comedy. You can kind of do whatever you want.

What’s one of your favorite songs off Velociraptor!?

SP: “Switchblade Smile.” It’s such a powerful song and live it’s undeniable. We’re always trying to make music with the design that either people love it or they absolutely hate it. I think that tune, in particular, you can’t really ignore it. I’m really proud of that.

Do you tend to write music with the beat, rhythm in mind first?

SP: I’m just as much a producer as I am a songwriter because my songwriting forms from me producing the song. That’s kind of how I’ve always done it.

SP: Seattle is a place I really enjoyed- some places you arrive and you feel at home. You don’t feel so homesick. I like Seattle.

You seem to like hats – do you have a big collection?

SP: At home. I’ve not worn them so much recently but I take four or five around with me.

Where do you buy them?

SP: In Japan – there’s a Japanese designer called CA4LA, they make the best hats in the world.

I love the song “Vlad the Impaler.” Are you interested more in the Bram Stoker type story rather than the newer ones?

SP: Yeah, the song was so scary when I wrote it. I didn’t know what to call it. It seemed it needed a ferocious title. He’s a fascinating character in history, the original (Vlad). It’s quite unbelievable really.

What’s been your favorite film of that genre?

How did you come up with the bass and rhythm in “Fire?”

SP: It’s strange how that one came together – it’s kind of two songs. There’s almost and Elvis groove. . . and Johnny Cash. . . and the band kind of off stage. There’s a battle going on. I remember writing it -It seemed kind of odd but it really worked.

Do you dream of music, and are you aware of it?

SP: [For me] It’s lyrics in the morning and music at night. I wake up and have loads of lyrics.

Do you think Kasabian is more electronic than rock?

SP: The freedom of it . . . the free spirit, the creativity. People were coming up with ideas, there wasn’t you can’t do that, or you’re not allowed to do this. It was a free time creatively. You almost forget they’re artists sometimes – it’s your job to blow people’s minds, open their heads up, help them look around.

Your dad is Italian – Did you learn Italian?

SP: My grandfather was Italian. When I was younger my dad tried to make me go to classes, but when you’re a kid you rebel. You’re certainly not learning another language, you can barely speak English. I wish I had gone. I’d really like to learn it. I think I know more than I make out – I can understand a fair bit.

Kasabian were all living together when you first started – do you miss that daily contact?

SP: There’s bits you do miss. We didn’t have any responsibilities, no families [but] I’m glad we don’t live like that any more because you’ve got to let go of that time. It’s such a special moment in the history of the band. It really changed things for us.

“U Boat” is one of my favorite Kasabian songs. Do you remember writing it?

SP: Originally I wrote it as a piano piece. I was listening to Tangerine Dream at the time.

What about “Days Are Forgotten,” is that a recent one?

SP: That was one of the last ones I wrote for the record. It’s sort of primal. It’s got a real edge to it – it works so well live. It’s an exciting, positive song – leaving something and starting afresh.

Are you a fan of poetry?

SP: William Blake’s probably one of my favorites. On those type of things I wait for someone to recommend someone. I’m not really immersed in that world.

Do you ever think about having a big guitar solo in a Kasabian song?

SP: I just think it sounds so old fashioned. One day I’m sure we’ll kick out something.