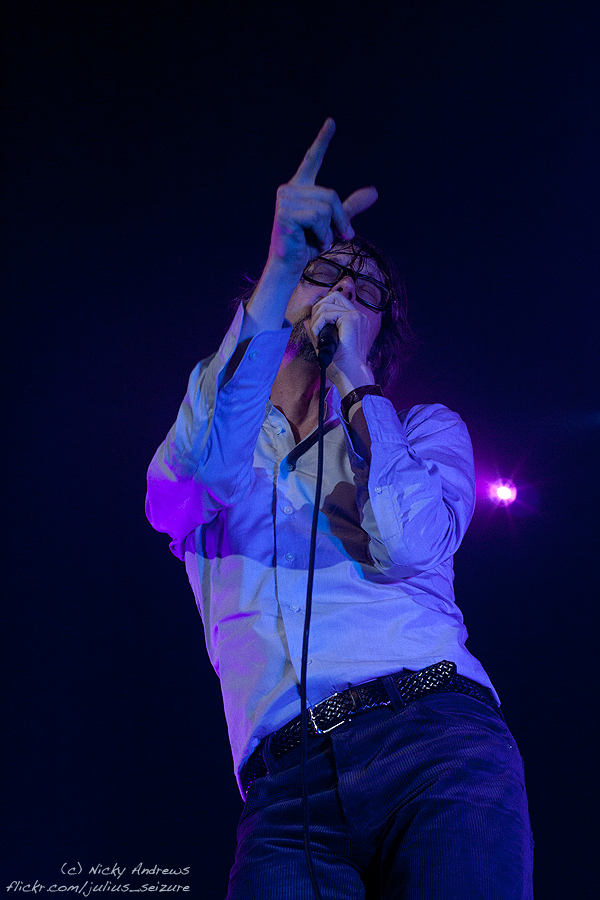 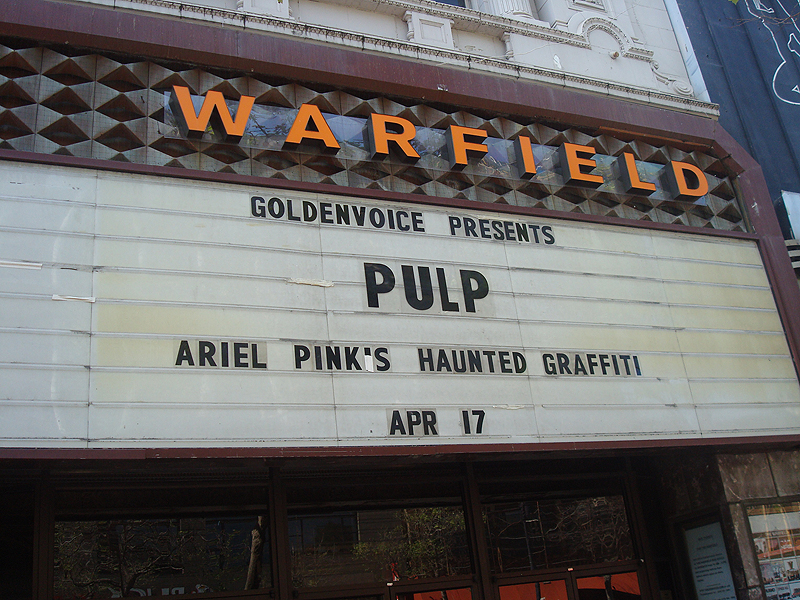 Their first US appearance in a decade – it was no surprise that Pulp’s only West Coast non-festival show sold out in just five minutes.  Since the release of We Love Life in 2001, Jarvis Cocker has released two solo albums, as well as lent his songwriting/acting talents to both Fantastic Mr. Fox (“That’s just weak songwriting!  You wrote a bad song, Petey!”) and Harry Potter and the Goblet of Fire (Appearing as The Weird Sisters with Jonny Greenwood, Phil Selway, Steve Mackey, Jason Buckle and Steve Claydon).  In a rather unrockstar-like-fashion, he also teamed up with the National Trust to create an album of ambient sounds like birdsong and running water; and last year released Mother, Brother, Lover, a book of lyrics accompanied by a tour doing poetry readings at bookstores.  I was fortunate enough to be able to attend last week’s show at San Francisco’s Warfield, and could not have been more stoked about it. 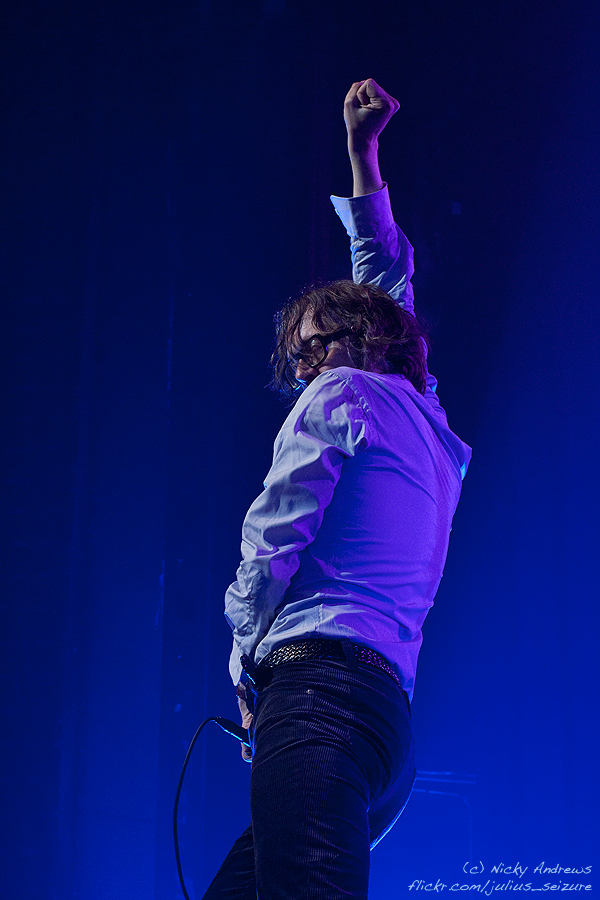 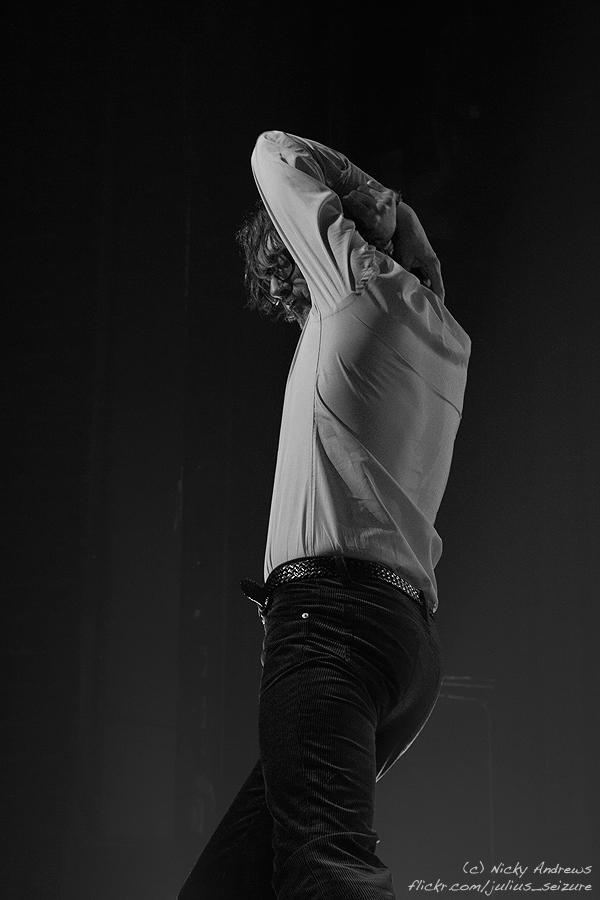 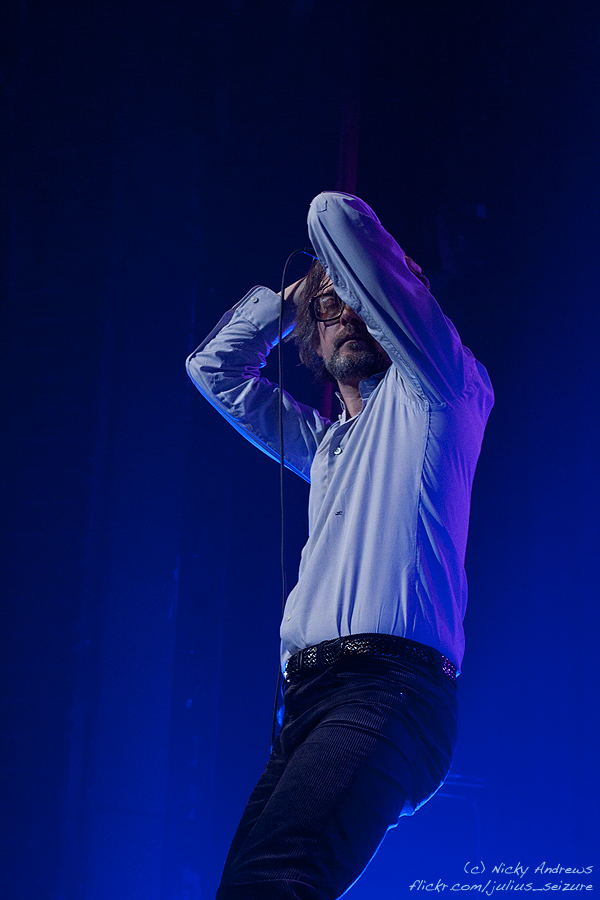 Let’s get this out of the way:  As it turns out, Jarvis Cocker is hysterically hot. Committing unspeakable acts with a speaker-stack, alt. music’s most unlikely sex symbol proved treacherously captivating, whether reading excerpts from a text of Jacques Prevert (purchased at City Lights just hours before), or stomping raucously forward with a series of swaggering high-kicks that would make Carrie Brownstein take note.  A series of ridiculous juxtapositions, Cocker is by turns caustic, inclusive, awkward, self-deprecating, perverse and insightful; both narrating his own wistful misadventures in unrequited love, and inducing devastating states of lust throughout the audience with a suggestive swing of his mic cord.  A man very much in charge of his svelte, six-foot-three frame (a pair of stacked heels adding even more height), Cocker thrust, writhed and posed around the stage with an energy one would not expect from a 48 year old who resembles an English professor. The audience responded with levels of appreciative excitement that paralleled Beatlemania; a flurry of horn-rimmed, awkwardly pointing Brit-poppers, including many who clearly were not old enough to have seen the original release of Different Class, and didn’t care one bit. 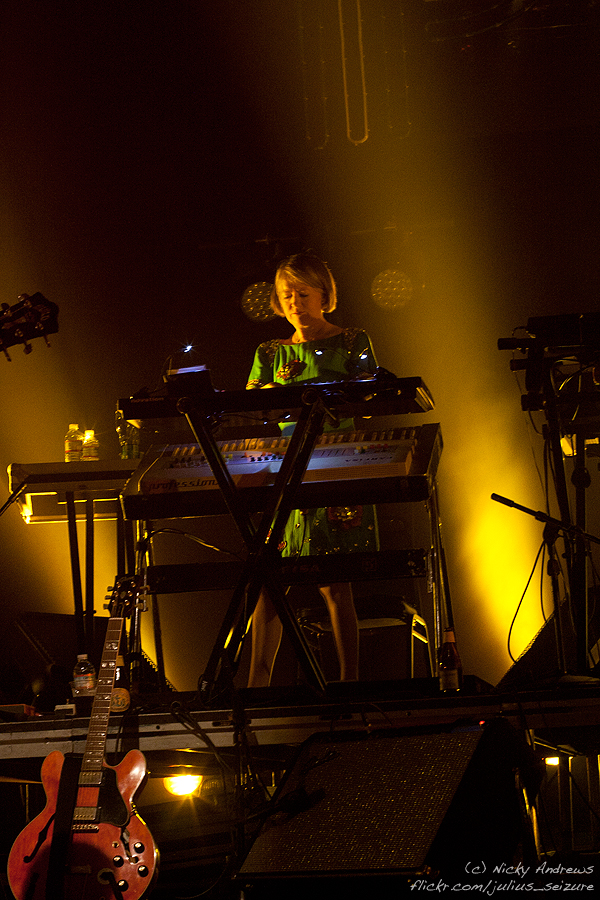 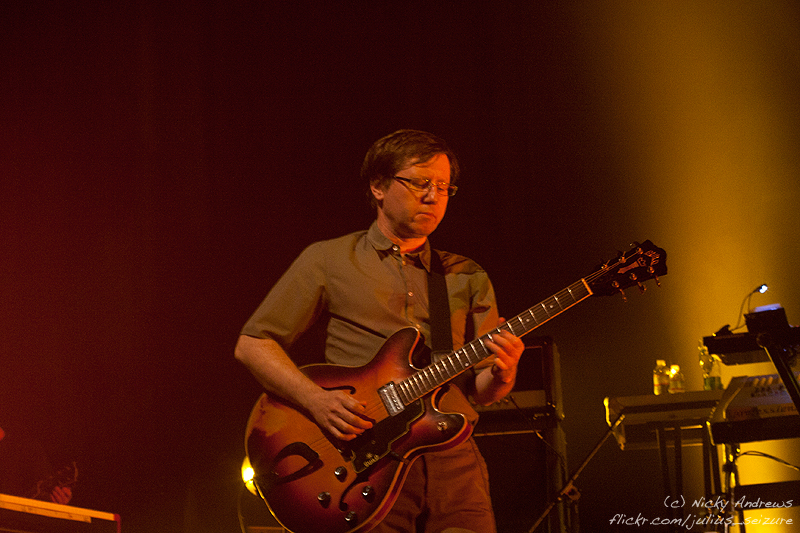 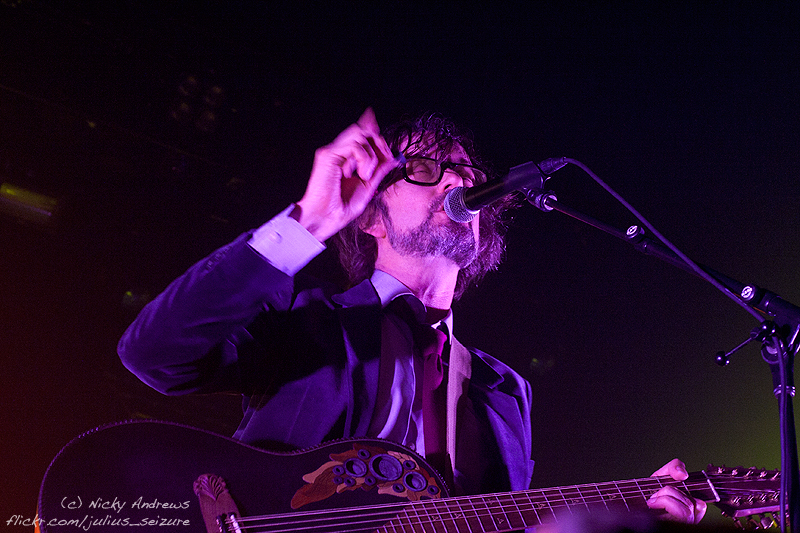 As a frontman, Cocker is pitch-perfect, particularly when connecting with the audience, something a lot of bands don’t bother with.  Putting down a potential heckler who was making a harrowing noise reminiscent of The Black Smoke from Lost, he remarked dryly: “That was impressive!  I don’t want to hear it again, but that was impressive…don’t hyperventilate now, just have a wee sit down.” 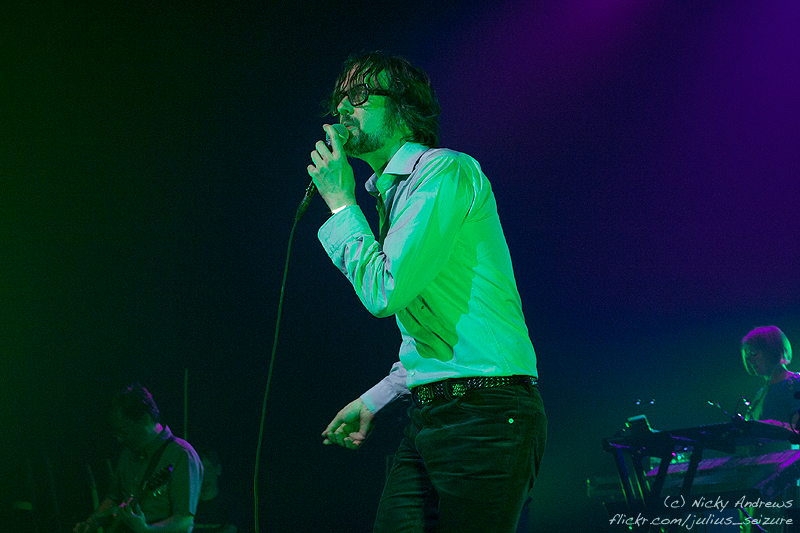 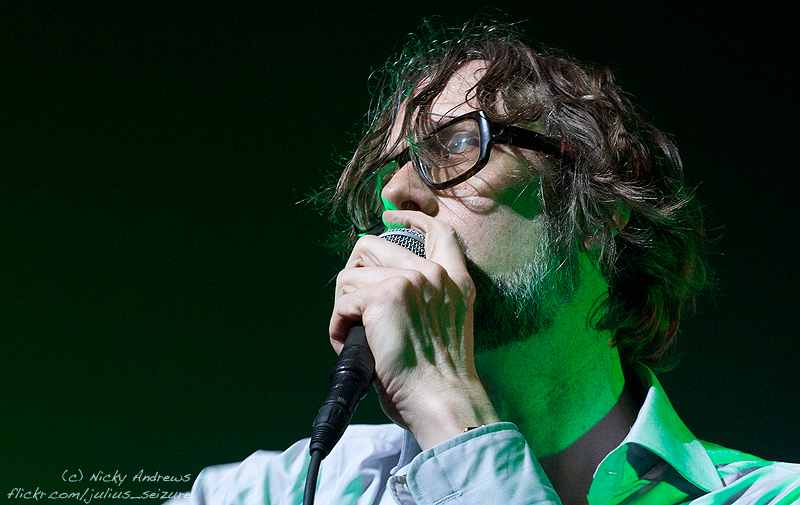 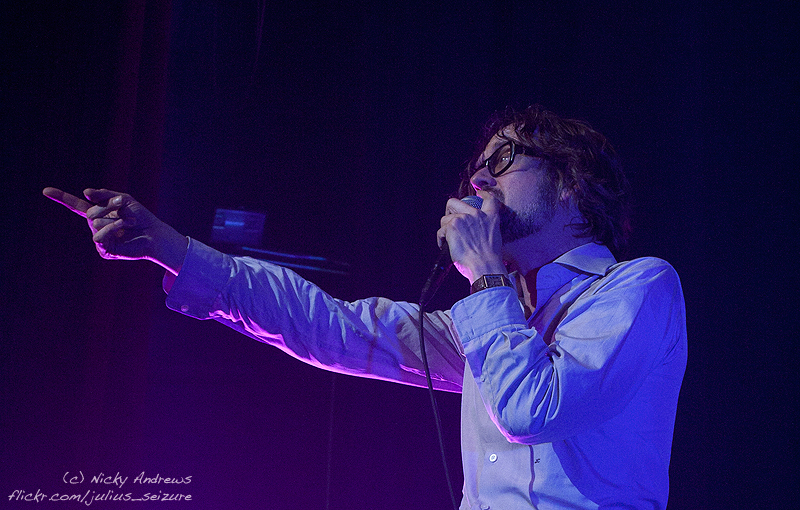 Likewise, Cocker is studiously quoting Danish author Karen Blixen, who was “born this day” – “Do you know why the cure for anything is saltwater?  It’s either sweat, tears, or the sea,” when someone tosses a blue silk brasserie onto the stage. “How fortunate that this has arrived here,” he intones, not fazed in the slightest.  “At this particular moment.  It’s almost as if someone was planted in the audience, or someone knew in advance what song we were going to play next.” To a sea of cheers he raises said undergarment to his face and breathes in deeply.  “I have to say that that smells…very nice,” he quips. And then he launches himself out of the spotlight and bounds into a rendition of “Underwear” that is as anguished and poignant as ever. 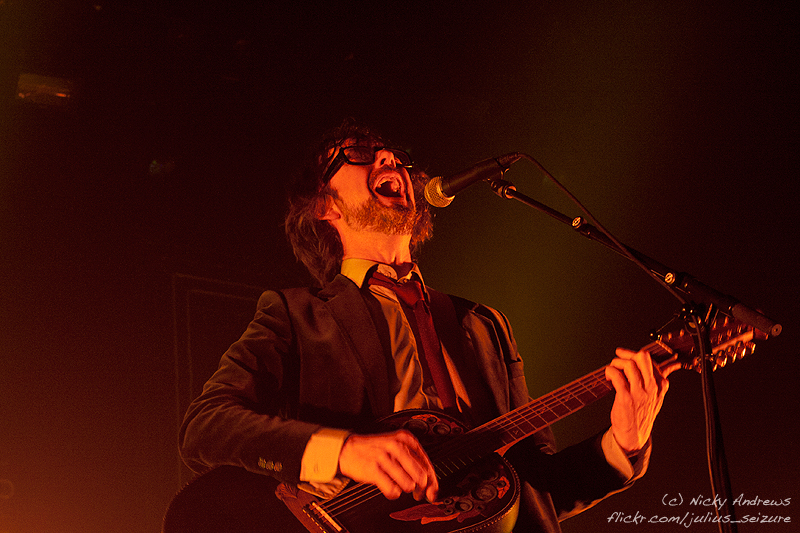 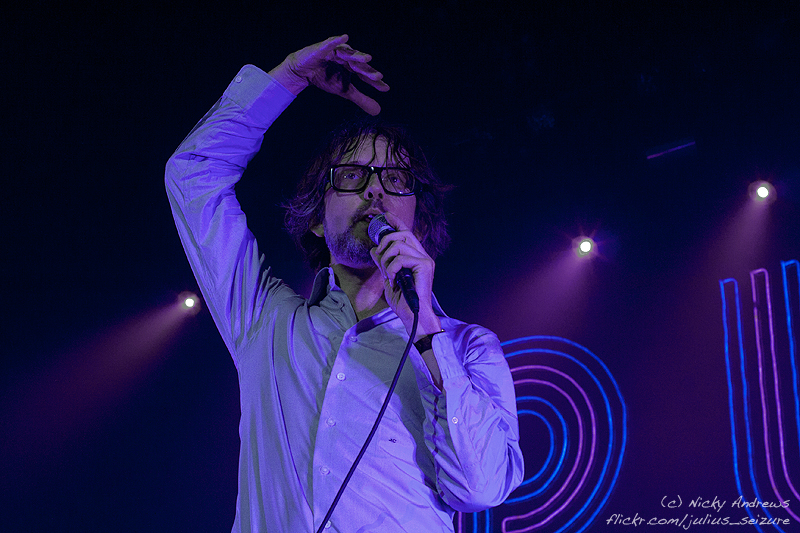 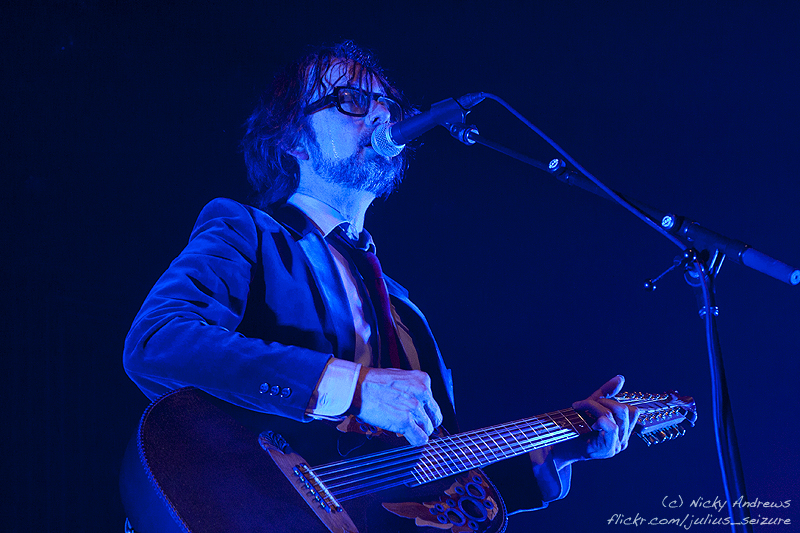 Pulp remain an alarmingly relevant band, with the Occupy movement highlighting class warfare for a new generation of activists and listeners alike.  As such, it was only fitting that the main set closed with “Common People,” arguably the single most unifying anthem to ever come out of the United Kingdom.  Just as fittingly, The Jarv passed out a beer during the introduction:  “If I give you this beer, will you share it with people? Will you? Are you a sharer?” From there, it was down to business, with the crowd reaching an intensity that can only come from years of feeling marginalized: “You will never understand/How it feels to live your life/With no meaning or control/And with nowhere left to go”. In a nod to “Strange people…just like us,” the second encore closed with ‘”Mis-Shapes,” an uproarious sing-along giving way to a strobe-lit abundance of raised fists; the audience bound together in sharing this event, this declaration of other-ness, outsider-ness and resistance. 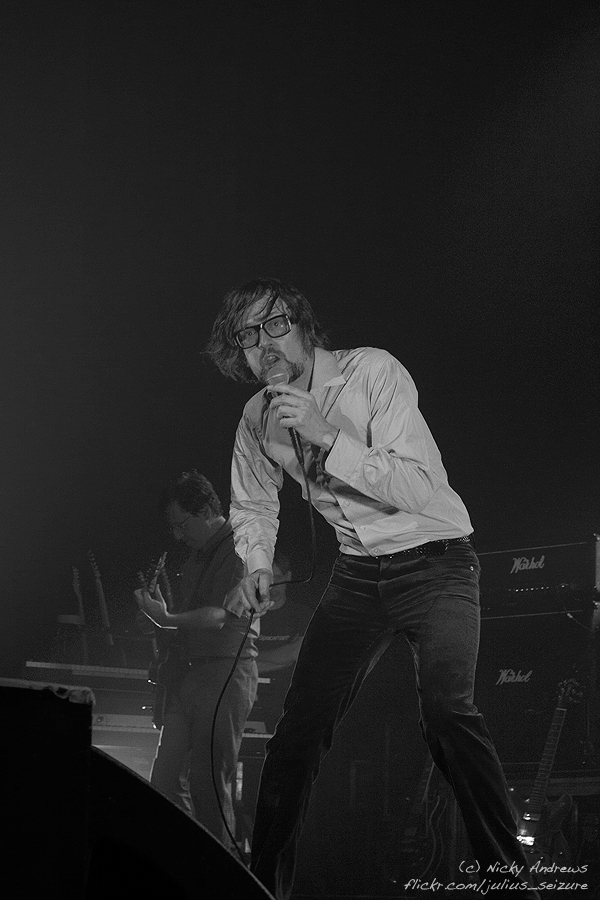 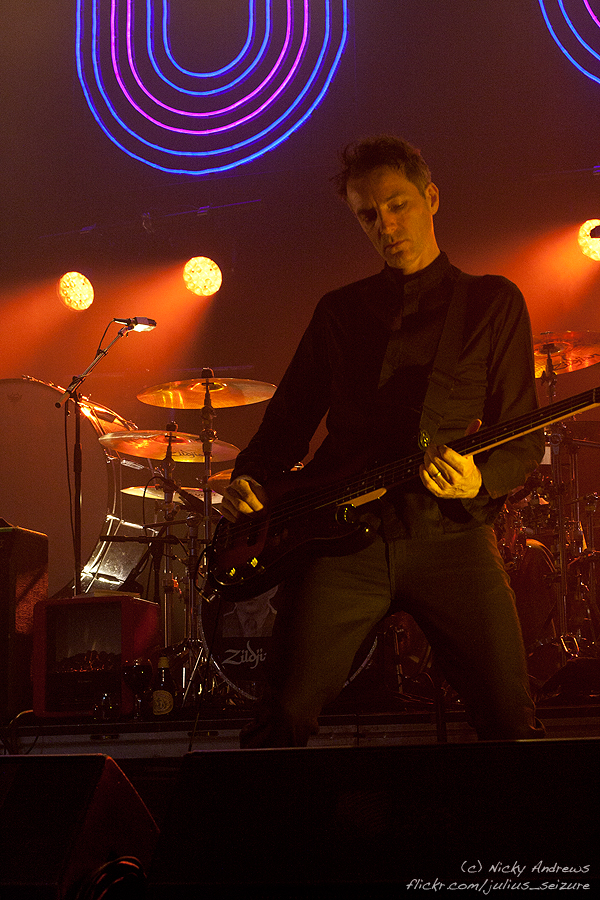 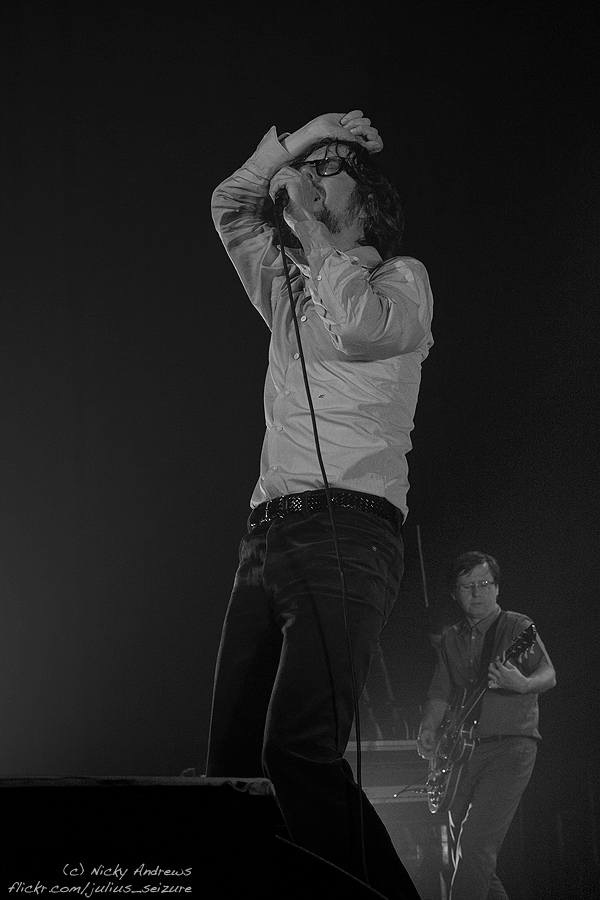 It is somewhat astonishing that this band has had such a large break in touring – the sound quality was perfect (even with the notable and mysterious absence of Russell Senior) and definitely did not have any hint of going through the motions. Touring guitarist Leo Abrahams even had a broken fucking hand and that couldn’t stop him from powering through the set like a champ, cast and all.  There were some tracks I would have preferred to hear (“PTA,” “Inside Susan,” “Your Sister’s Clothes,” “Seconds,” “Mile End,” “The Fear,” “Bob Lind,” “Master of the Universe”), but with a setlist spanning just over two hours and including two encores, the audience was more than spoiled with a broad representation of Pulp hits.  Sadly, the night had to come to an end, concluding with “My Lighthouse,”‘ in honour of the night being the 29th anniversary of Pulp’s first record, IT – which Cocker admitted to reading from the band’s Wikipedia page. 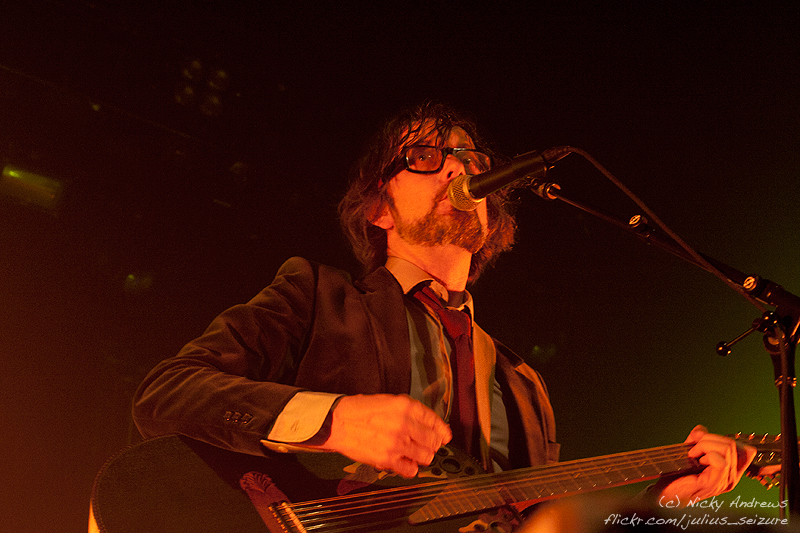 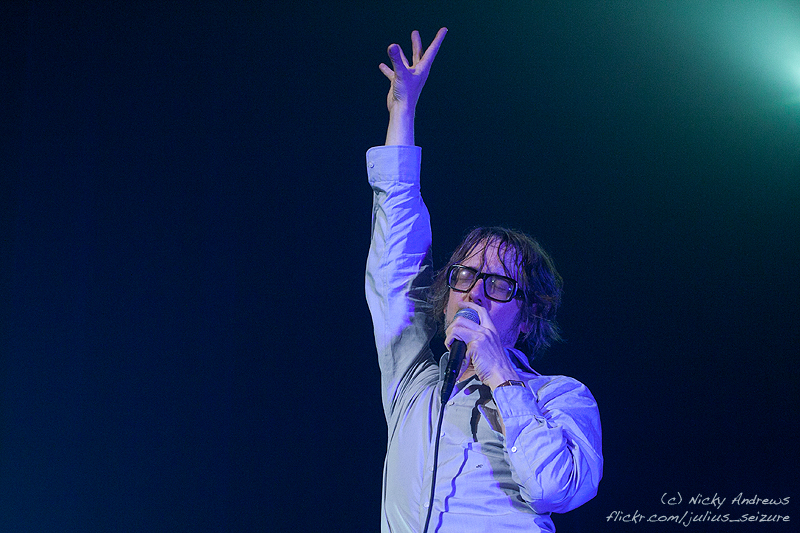 Some things have changed – Jarvis now passes out bottles of beer and glasses of wine in lieu of famously sharing his cigarettes, and his shirts now sport monograms, but he remains a hero of the common people, witty and polite.  “Thank you for coming here this evening.  Maybe that sounds trite, but y’know…if you hadn’t’ve come this would have just been a soundcheck and that would have been very very boring.”  As we dispersed from the theatre, heady with solidarity, the girl standing next to me confides that she spent $900 buying two tickets from a scalper, a fact she divulges without an iota of Buyer’s Remorse. Indeed, it was money well spent to be present at a show that is going to be remembered for years as being nothing short of legendary. 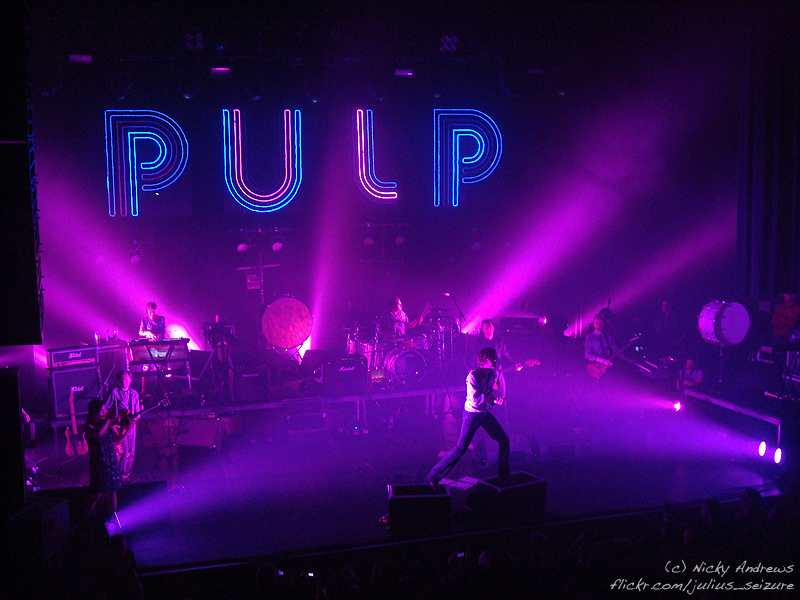 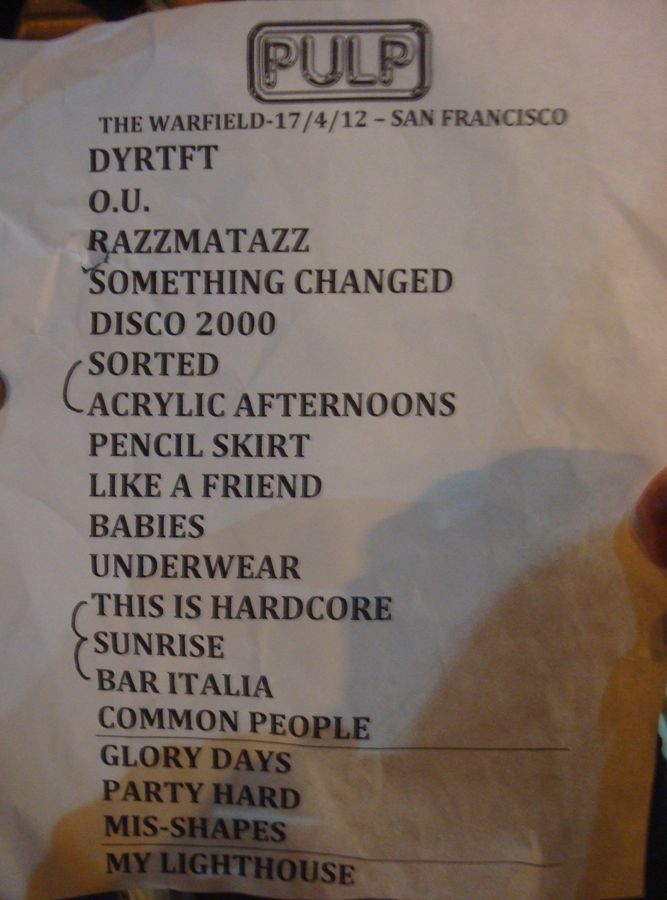