I talked with Danny Saville and Nathan Sudders of Manchester’s the Whip after their stunner of a show recently in Seattle. Saville, keys, and Sudders, bass make up half of the Whip, which is way up there on my list of favorite bands. Together they make this perfect kind of beautiful bass heavy synth music with the addition of a vocals/guitar from Bruce Carter and drums from Fiona Daniel. You can’t reproduce this woman’s mighty drumming on a machine – live she’s dynamite. The connection of this band live is something very rare – they seem actually to enjoy themselves in a completely unselfconscious way. And Carter, well, his voice is a filthy pleasure.

—
Dagmar: I’ve been reading about how great Fiona’s house parties are.

Nathan Sudders: She’s renowned for her house parties. I’ve spent a couple of days in her flat, partying. She’s a bit of a monster. It’s all true.

Danny Saville: I don’t know where she gets all her energy sometimes.

D: So you used to live in Salford?

NS: No, that’s where Bruce and Danny started recording.

DS: In the cellar of a pub. We started most of the album there.

D: Was the cellar a creepy place?

DS: It was supposed to be haunted. A lot of the barmaids wouldn’t go down to the cellar. It was an interesting place to be because there was loads of random karaoke going on upstairs. On one of the tracks, can’t remember which one, you can hear bits of karaoke in the background.

D: I asked in part because Salford is the inspiration for one of my favorite shows, Coronation Street.

NS: You can go to Grenada studios and walk down Coronation Street.

D: That would be so much fun.

NS: It’s good. You can go into Rovers Return and have a pint. It’s British National Heritage.

D: When Vera Duckworth died it was very sad.

DS: She [Actress Elizabeth Dawn] owns a pub in real life. Right in the middle of Manchester, so you can go to Vera Duckworth’s bar. There are photos of her celebrity friends all over the wall. I’ve been there for a drink.

D: Do all of you get together and write the music?

NS: The nucleus is Bruce and Danny. It comes together live and odd little things change.

DS: We record wherever we can.

D: How did you get started in music? Did you start as kids?

NS: I started playing bass when I was twelve years old.

DS: I started playing guitar when I was twelve years old.

NS: My dad’s brother was a musician and when I was two or three years old I used to go up to this one guitar – I was fascinated by this one guitar my uncle had. He actually gave it to me. It was a cheap bass guitar and I carried it around with me when I was two years old or something. I had no idea what it was. Then when I got to about ten my friends were forming bands so then I started lessons and that was it. Fiona was doing a band with her sister, who was singer/guitarist and songwriter so she started playing [drums] when she was about eleven. I’m pretty sure Bruce got into it about the same time. Danny originally was a guitarist. He used to sing and play guitar and do solos and everything. He’s got a good voice, Danny, but he hides it.

D: How did you meet up with Late of the Pier for the tour?

DS: A couple years ago we were both supporting a band in the UK called Hadouken!. Since then we’ve bumped into them on many occasions. This opportunity arose in the US and we have the same booking agent.

NS: When you tour with bands sometimes, it’s not that you don’t get along with them . . . us lot, we got along from day one. We’re always two bands mingling. They’re good lads and I think it’s a good pairing.

D: Nathan, you are a classically trained musician?

NS: Yeah I went to music college and did A-levels.

D: You did theory?

NS: I did theory on Handel’s Messiah and stuff like that. It’s weird though because as I was doing that . . . I started college when I was sixteen but I actually moved to Manchester as well. I was doing original music in Manchester and then coming home and doing my college thing. People at the college were really supportive.

D: Who came up with the name the Whip?

DS: It was a combination of the band and our friends. We spent ages trying to think of names. Whip was always in the name but we tried to find a word to join with it. Our mates just kept on saying, it’s the Whip. In the end it was just like, let’s leave it at the Whip, it works.

D: You’re going to start recording your next CD soon?

NS: As soon as we get back.

DS: The main body of it’s all written. There’s a couple tweaks here and there, a bit of messing around with a couple more songs to add to it. We’ve got to get the drums down probably in a good room – things like that.

DS: We just haven’t had time.

NS: It’s been such a rush. I think if we do a couple days of hard rehearsing just so we can get it nailed as the four of us together . . . I think we all felt that with X Marks Destination that our live show is a bit more intense. We didn’t capture that as much.

D: It is very intense.

D: Who came up with that awesome bass line in Trash?

NS: I like to take the glory for it, live. Bruce is a very talented guy.

DS: Bruce loves the bass and everything about it. A lot of the songs we all write stem from the bass guitar or synth bass.

NS: There’s a lot of dirt in them.

DS: It’s what drives the song – the sound and the smell of the bass. I think bass has a smell. It’s like a haze.

D: Originally Danny and Bruce started the band – when did Nathan and Fiona join?

DS: About six months on. Me and Bruce had been writing for ages.

NS: But they’d not done anything. They asked me to join and then there was going to be a drum machine at first but I was like, you’ve gotta get Fiona in. She’s amazing, she’s perfect for this kind of music. As soon as we did that first rehearsal with Fee, that was it. I think we only rehearsed twice and then we were out gigging, straight away. We were all in the band when the name the Whip started.

NS: It’s awesome. It’s like a really old school rave. It’s down underneath a train station in a car park. It holds 3 or 4 thousand people and it’s renowned for having a good lineup. . . Simian Mobile Disco. Chemical Brothers. Doesn’t finish till six in the morning.

D: I want to move there.

NS: You should. You’d love Manchester. Similar weather.
—
You can see photos I took of their show here & here.

I caught Lady Sovereign at the Crocodile recently and wow, I really love this woman. She’s charming, talented, beautiful and smart. She came out in a Married to the Mob sweatshirt, then stripped down into a Married to the Mob T-shirt, and eventually to a purple tank top. She borrowed an audience member’s brush to fix her hair, she poured Heineken on the crowd – including about a whole bottle on my head. I can think of few people whom I wouldn’t mind doing this. She’s one of them. She made fun of herself without it sounding like an elaborate wind-up. And yes, she also did some great songs such as Love Me or Hate Me, I Got You Dancing, So Human and a very punk show-stopper Public Warning. I took some photos: 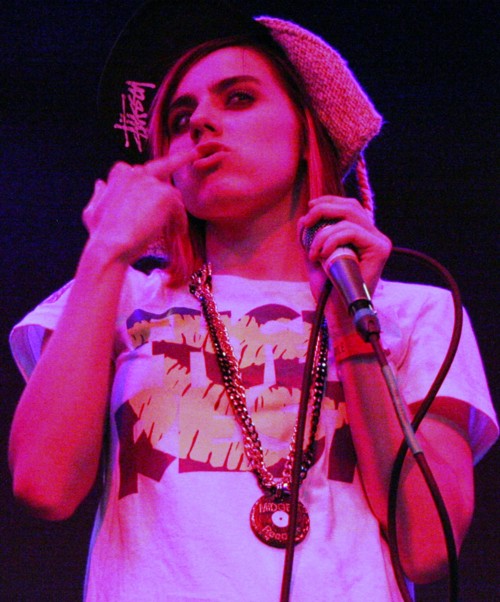 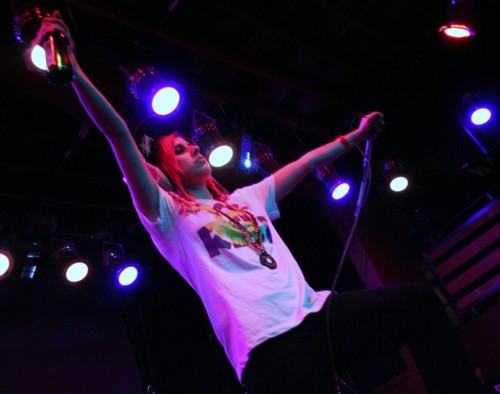 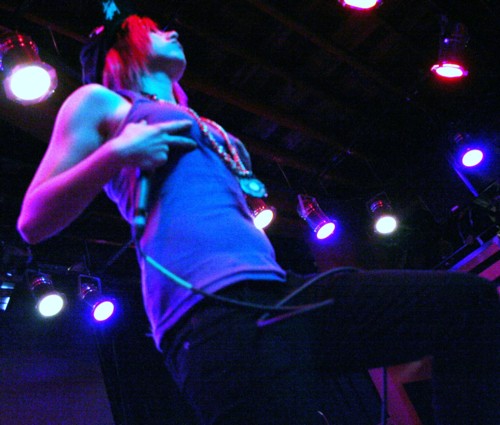 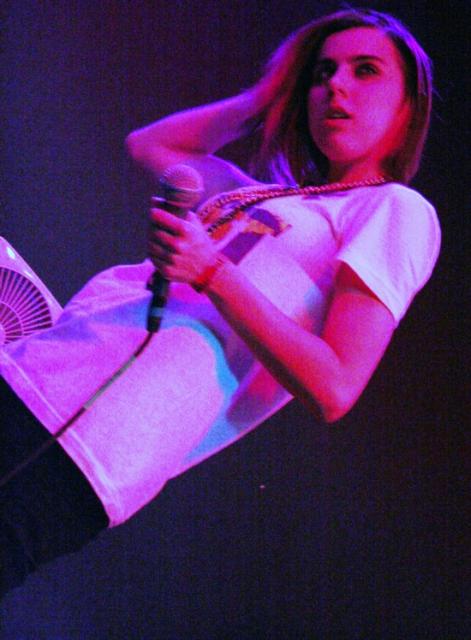 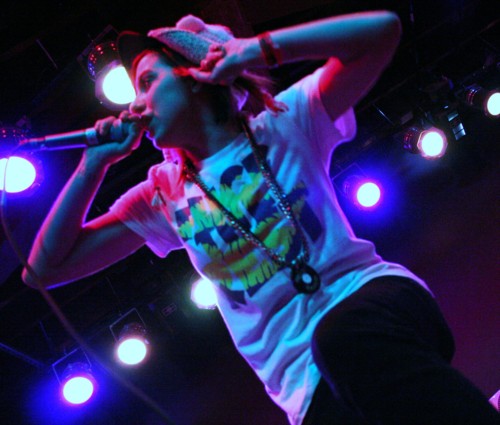 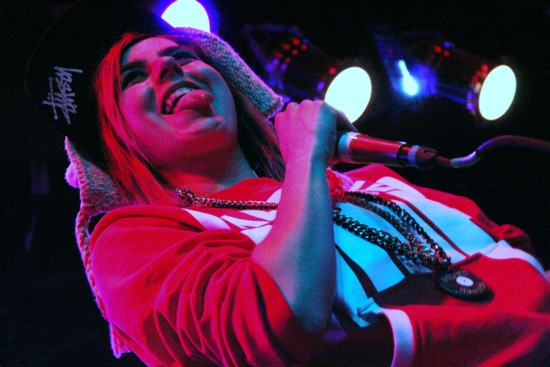 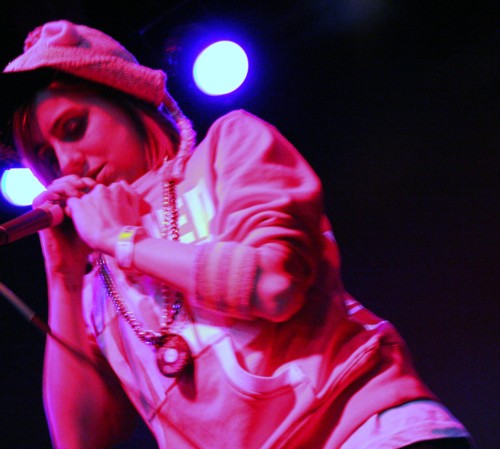 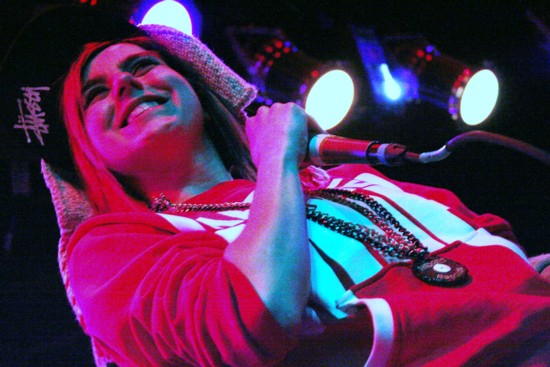 Metric pounced into Seattle last Thursday and put on a glowing show. I like their energy and I think Emily Haines is deservedly known as a talented and sexy performer. And they did some of my favorite songs of theirs, including Dead Disco and Help I’m Alive. I was also impressed that Haines mentioned their first show in Seattle where they played the Crocodile. According to her there were only 2 people there. Here’s looking forward to their return, which will have thousands seeing them when they play Bumbershoot in September 09. In the meantime, photos photos photos: 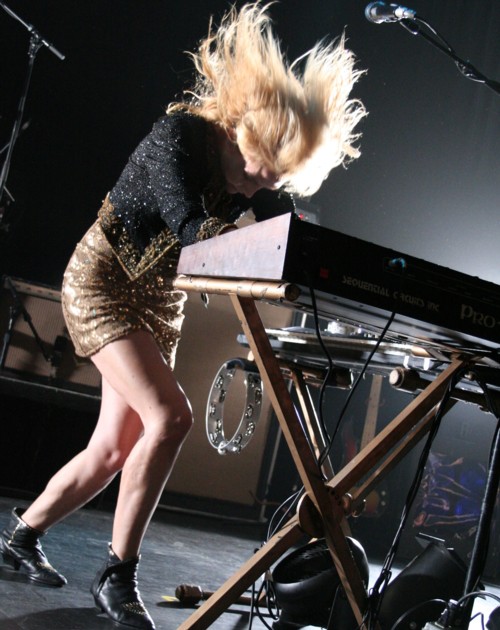 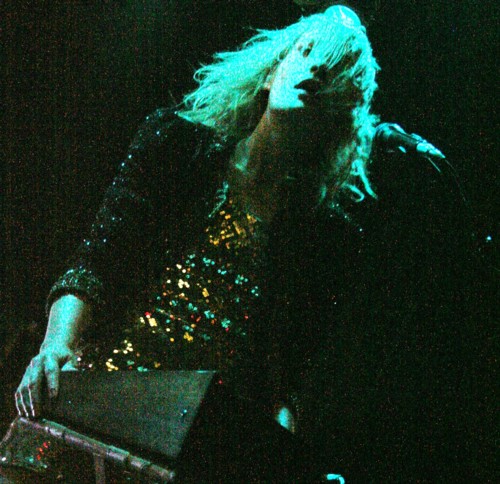 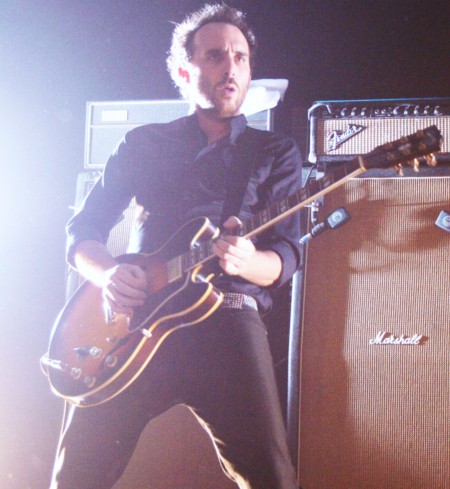 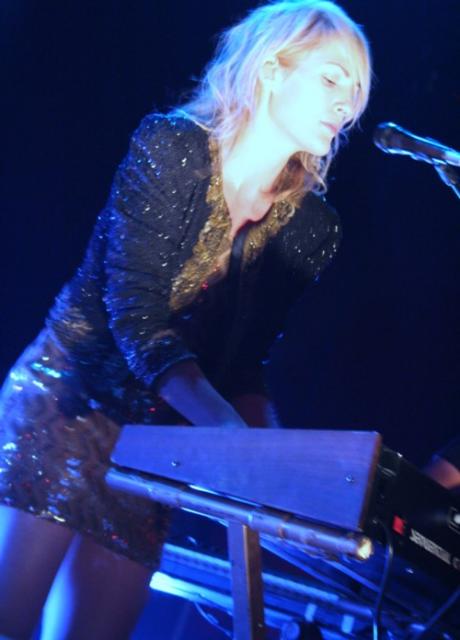 all photos by Dagmar – you can see more photos here.

And I placed what it is that Emily Haines reminds me of. This may seem pretentious but she reminds me of these kind of Pre-Raphaelite paintings:

It was rowdy and violent crowd that took over the front part of the stage for the Kills‘ Seattle show. Fortunately I got to stay up there through the show either on one side or the other, finding a safer pocket towards the stage door. Jamie Hince and Alison Mosshart of the Kills sound and look so foxy it was worth braving the storm of their fans. Highlights for me: U.R.A. a Fever, Cheap and Cheerful, Last Day of Magic and Black Balloon of Midnight Boom, No Wow of No Wow, and Fried My Little Brains of Keep on Your Mean Side. I adore this band. Now some of my photos: 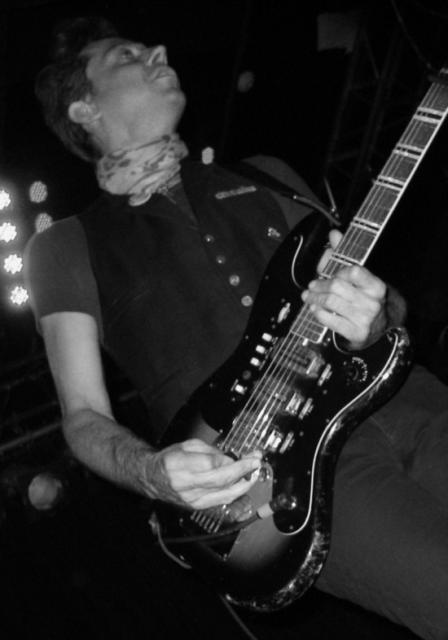 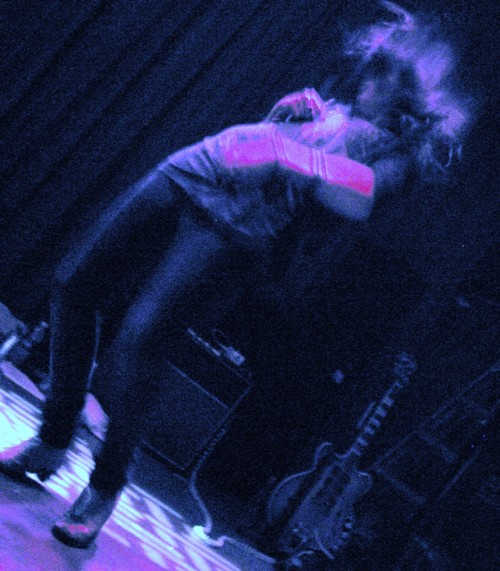 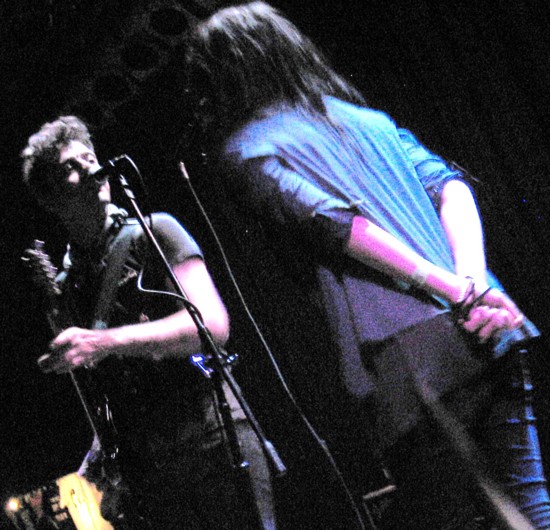 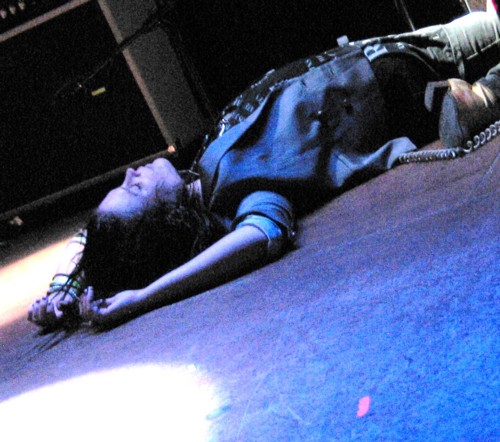 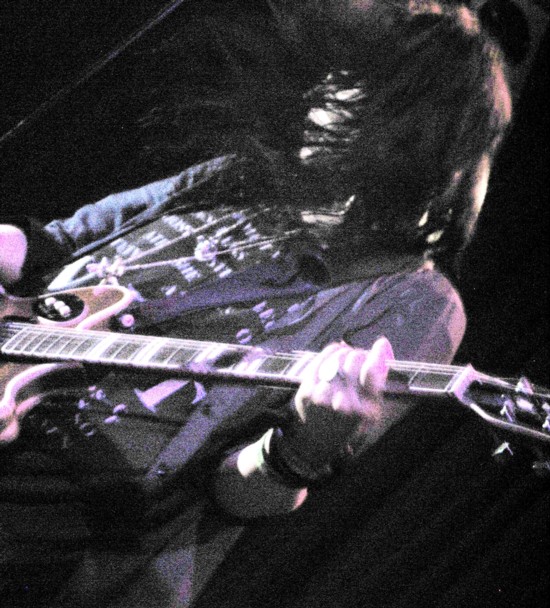 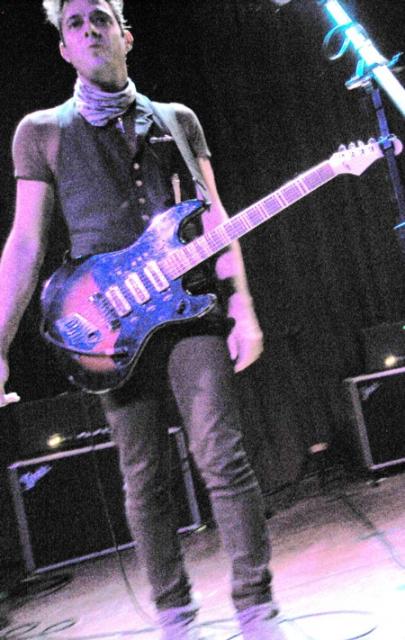 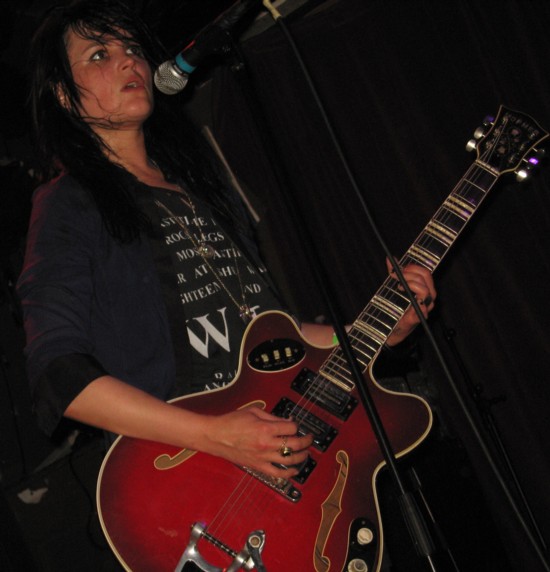 You can see more photos here:
Gallery of the Kills @ Neumos

I will have more photos soon but here are a few I took of last night’s very hilarious show by Flight of the Conchords. Sugar Lumps was especially inspired.