“I am not afraid of losing my mind, as long as it happens a day at a time,” announce Citizens! in their song, “Reptile,” a track off their smashing 2012 debut, Here We Are. Their music is all about melody; you can get involved in their songs in a completely unsterile and intimate way. As evidence I submit “(I’m in Love With Your) Girlfriend,” “She Said,” “Love You More” and “Let’s Go All the Way.” There’s disco, New Wave, indie guitar . . . fast-paced loveliness. The British five-piece boldly announced their international presence with an album released by the French label Kitsuné and produced by Alex Kapranos of Franz Ferdinand – two superb people to have in your corner when you’re making great, appealing pop music.

Last week I talked with Mike Evans, Scottish-born drummer of Citizens! (don’t forget the exclamation point, it’s part of the name). Evans also provides backing vocals in the band, which includes singer Tom Burke, who has become a new face for Hedi Slimane/Saint Laurent. That’s right, this is a 100 % handsome band. As they drive through the States, Evans mentions that it’s really pretty, but “we’re driving through snowdrifts and cars are coming off the roads.” They soldier on. One activity Evans has been able to partake in as a visitor to the States is sampling the local beers (at the time of this interview he’d enjoyed Brooklyn Lager the best). Of course not while driving through snowdrifts. 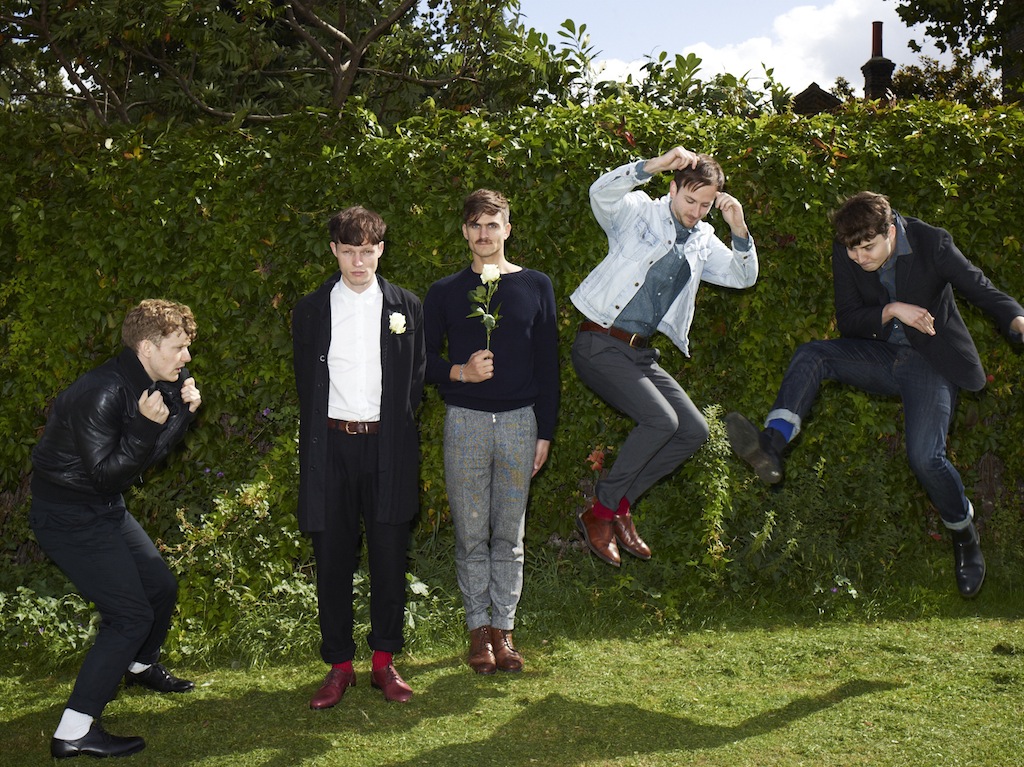 Citizens! – Mike Evans is center, with flower & with more than a passing resemblance to film star Omar Sharif.

Three of Citizens! used to be in a band called Official Secret Acts, and soon after it disbanded they regrouped to form what would become Citizens!. From listening to OSA’s myspace page, they sounded like a pretty tasty band as well, but now we are lucky to have Citizens!. You can credit friend of the band, Art Brut’s Eddie Argos with the group’s name. Evans reveals, “He kind of casually mentioned it. He’s a fount of all popular culture knowledge. He’s very funny. It made sense with what was going on at the time . . . the riots. It’s a headline. It’s a statement.” It stuck. “I think it’s got a broad appeal. We really like the way it sounds, and we wanted not to confuse people with our name.”

The band got the attention of eventual producer Kapranos via mutual friends. Evans recalls, “We had (mutual) friends who were in different bands. We were getting demos together and starting to think about labels, we brought a couple demos to Alex. He immediately seemed to get what we were trying to achieve, without even mentioning that he’d want to produce our record.” Everything fell into place, all quite organically. “We were just talking to him about mutual influences and our favorite bands. We were on the same page. Our next conversation kind of naturally led towards Alex being involved with the record as a producer. It was kind of a natural process really.”

When it was time to record Here We Are, Citizens! headed to Kapranos’ isolated studio in rural Scotland. Sometimes you hear tales of tempestuous album recordings, but for Citizens! Evans says, “It was wonderful. It was in the middle of nowhere, away from the usual distractions. We really focused on what we wanted to achieve as a band. Working with Alex was a wonderful experience. He really challenged us, and made us ask ourselves questions about every aspect of each song.” To me the album sounds as if it could transfer to a live show quite well – and very straight forward in some ways. I can’t seem to put this elegantly – Evans says it better: “There’s no trickery whatsoever. We really wanted to get that across, which we’ve managed to achieve. It’s a very human record. Alex was very instrumental in that. It’s a band playing parts and songs – it suits the ethos of the band.” As far as Evans’ top track off the album goes? “I think we got pretty close to what we imagined with “True Romance.” We wanted to mix up all of the parts having the poppy and repetitive piano riff and bringing the influence of the drums from somewhere else – that no two parts of the song sounded from the same era.” That might just be one of the most appealing things to me about this band, the disconnect in times.

Sartorially speaking, the band looks splendid. Watch the videos for “Reptile” and “Caroline” and see what I mean. Evans says they planned this, somewhat: “We like to talk about everything. Whether we agree on everything or not, I think we decided we wanted some kind of stylistic identity.” And that seriously awesome dancing in “Reptile?” That was unplanned; the director just let them improvise however they wanted to dance. The unplanned decision turned out beautifully. Evans: “It was absolutely improvised. Tom stole the show.”

Citizens! have begun receiving gifts from fans, and Evans says “We’re really lucky to meet fans. There’s a couple fans that are really dedicated, especially one with art work. I believe there’s one in Paris who draws these wonderful illustrations/cartoons of us. I find it sweet. We never would have expected that.” I agree. I honestly think it’s a mark of a band being something special when they inspire the imagination of and creative interest of fans. Part of this is because I think Citizens! are doing something different, and doing it well. When I ask him if he thinks there’s been a recent change in British music he comments that “There’s been a handful of really exciting albums released by British bands that aren’t making or producing albums for cynical reasons, which is really refreshing. Bands stripping back what would normally be seen as pop in a kind of commercial sense, and really getting back to the simplicity of great melodies and hooks, which is what we to try to achieve.” Evans continues, “Bands like Kindness, Django Django and the xx. Albums that stand up on their own. We regard them as pop music albums and it’s really refreshing.”

There’s a page on SoundCloud I came across of Evans’ solo work. I recommend checking it out, as it shows he’s an excellent singer-songwriter individually as well. When I tell him the songs actually brought those good tears to my eyes, the kind you get when you hear pretty music, he is genuinely surprised. “It’s stuff that I do that isn’t quite right for the band. It’s a silly page for silly stuff.” When he calls it half-baked, I object. I would love to hear the fully-baked. Which brings me to a little tidbit about Stevens, he likes to cook. He received a tagine from Kapranos “totally out of the blue.” “There was no looking back,” he says.
~ interview by Dagmar