Bassist, singer and songwriter Piggy D. chatted with me earlier this year via telephone and was awesome enough to answer questions I had about his life and interests. Piggy D. plays bass in Rob Zombie and also has a really cool solo project, plus he’s working as one half of the band Black Foxx. He’s also a graphic designer and artist. His debut solo album, The Evacuation Plan is absolutely worth checking out, and new songs “Locust Dance” and “God Save the Queen Bee” floor me. You’ll be able to hear and see his bass playing prowess this Saturday, August 6th at WaMu Theater when Rob Zombie co-headlines with Slayer.

The song “God Save the Queen Bee” is fantastic. Are you going to be releasing more songs one by one?

Piggy D.: Thanks. I seem to be one of the only people that bought into this philosophy, as much as an album nerd as I am, especially with other bands, I think for lesser-established solo artists that’s 100 percent the wrong way to go. I’m kind of following my own BS theory. I just don’t think in 2011, technology the way it is, people have the attention span to listen to a 10 or 12 song record. 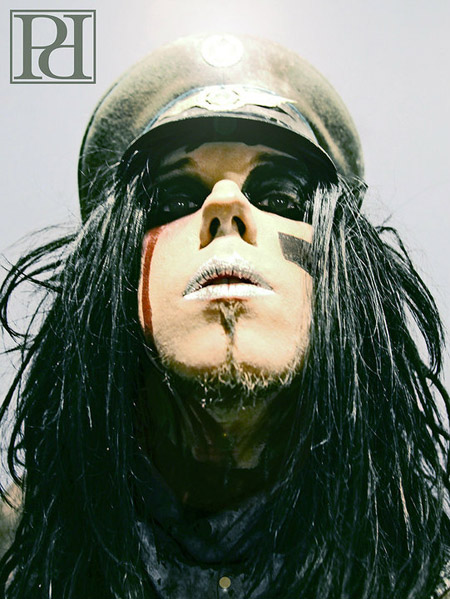 PD: Thank you, that’s one of my favorites.

How did you decide on your look for touring with Rob Zombie?

PD: It’s been a constant evolution. I think anybody who has the remotely artistic disease just kind of puts the paint to the canvas and whatever happens, happens. “God Save the Queen Bee” was a lot like that. That was the first time I’ve actually done stream of consciousness writing. I was up at 4 in the morning and I just started writing, and I didn’t stop. I didn’t think about what I was writing. The makeup kind of happened the same way. I didn’t sit down with Photoshop. I just kind of put the brush on my face and that’s what happened.

Kind of a natural thing then. Your family are musicians too?

PD: Before I was born my older brother played drums, my dad played bass, my mom played guitar and they’d play country and gospel songs. I grew up in Texas and was raised on that music. When my brother got into KISS and Van Halen I didn’t really stand a chance. I had Dolly Parton records, The Oak Ridge Boys records, and then I had Diver Down. I was screwed.

What’s this I’ve been reading about your new band, Black Foxx?

PD: The first song’s called “My Own Private Radio.” We actually have six songs recorded. There’s been some logistical things in the way but it’s great, honest, country pop rock stuff. We’re pretty psyched about it. As much as I love hard rock I really do listen to everything and I try to write everything when I have the opportunity to. Sometimes you meet the right people and you click.

I also gathered from interviews with you that you’re a Katy Perry fan.

PD: I’ve never met her. I heard she’s a really nice person. Same thing goes with Ke$ha. I love things that make me feel 12. What makes me feel 12 is Saturday morning cartoons, Underoos where you had the matching underwear and T-shirt and got to be Batman, “Don’t Stop Believin'” by Journey. That’s all stuff that make me feel 12. I guess I’m completely, mentally underdeveloped. When you buy a record and there’s a hot chick on it, and it smells like cotton candy, and the first song on the record is “Teenage Dream,” – I don’t care how burly-biker-vest-beer guy you are – and you don’t feel 12 when you listen to that song then you have no pulse.

I noticed a tattoo on the back of your left hand – what is it?

PD: There are song lyrics on my left forearm. On the back of my hand it says pig in Japanese.

Awesome! How did you select “D” in your name?

PD: Shortly after I was in the band where I acquired the name Piggy when I was 17 I started another band called The She Demons and we all decided it would be cute – and very unoriginal – to all have the last name demon, like The Ramones. Another bad decision. Now I have two bad decisions in my name. You introduce yourself as Piggy Demon and it just doesn’t go over well in the Bible Belt . . . meeting the girlfriend’s parents . . . 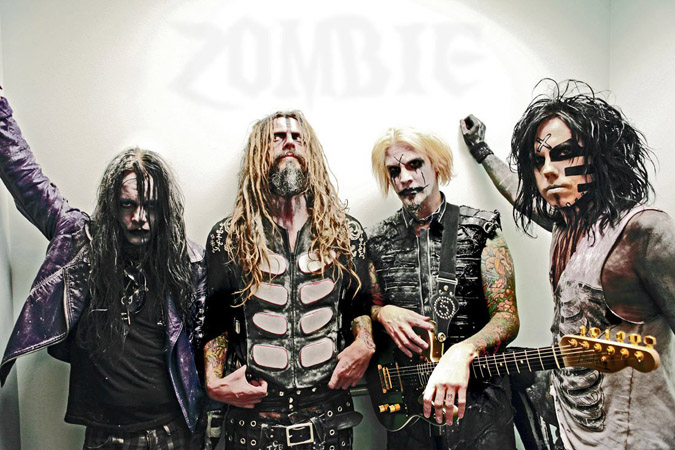 Who designed the Piggy D. T-shirts, like the ones with the pussycat and a monster?

PD: The pussycat one – I actually have that tattoo on my left arm. Carin Cronacher with our company Black Victory is the T-shirt design guru. She does Mötley Crüe, Alice Cooper, Metallica, Lady Gaga; she does everybody.

You were a Literature student in school?

PD: Yeah, when I attempted to go to college – I think I spent about two years in College – I was an English Lit major.

What do you read now?

PD: With all my free time? . . . I still like all the same stuff. The first time I really discovered Nathaniel Hawthorne, Oscar Wilde, Edgar Allen Poe, Emily Dickinson, Robert Frost – all the classic stuff – made such a huge impact on me. I had an amazing English teacher in high school. His presentation was amazing. It was the first time, aside from my comic books, that I really started reading something religiously I was able to connect with. Never really lost it. I don’t buy as many new books. . . I just finished the Keith Richards biography. Bob Mould has a biography coming out I’m dying to read.

You used to have dogs and cats. Do you still have them?

PD: Right now I have one – a black cat named Salem. She’s surprisingly unspooky. I keep trying to spooky her up.