Denmark’s New Politics is a fabulous combination of loud rap and even louder rock. The rock elements tend toward grunge and punk, and the way singers David Boyd and Søren Hansen position their vocals balances all these aspects effectively. Their debut, New Politics, was one of 2010’s very best, including ten leaping songs that are catchy and great. Hansen and Boyd co-write all lyrics and music, and have been working together for about five years. I saw them last year at El Corazon and was fascinated by their fervor and accessibility. That show and their CD were a couple musical high points of my year. Boyd can break dance – for real – and rap and sing. Hansen screams his vocals (he can sing traditionally as well – check out “Die For You,”) all the while tearing his guitar apart. Boyd, who is part Danish/Swedish and half American – and an occasional prankster – talked with me today from the Bay Area while visiting his dad’s family. New Politics will be in Seattle this Monday, March 7th at El Corazon.

I saw the video of New Politics participating in a hotel trashing contest. That looked very fun.

David Boyd: That was in Atlantic City. It was. That was once in a lifetime, unless we get really messed up one day and cause havoc for a night.

How did you start dancing? You can really break dance.

DB: I honestly just love dancing. That’s what I used to do. A lot of my friends would skateboard, and I wanted to dance.

In the video for “Yeah Yeah Yeah” you literally climb up a wall. Have you had any injuries yet?

DB: I haven’t gotten any severe injuries yet. If I’m practicing I could get a bruise. But I’ve never broken a bone.

I love the cover you did of Bad Religion’s “Generator.”

DB: Bad Religion had a thirty-year anniversary. So Spin magazine and MySpace needed to get a compilation of artists to cover their songs. They reached out to us to cover the song “Generator”. We didn’t know of them because in Denmark they weren’t a popular band. I’m sure there were people who knew about them. We’d heard the band name, and we listened and thought they were amazing. It sounded to us a lot like Green Day. You could definitely see they were a very inspirational band for punk and rock, the rebel generation or movement. We were able to do “Generator” and it turned out pretty good. We shot the video in one day. It was different with the little reggae breakdown. We didn’t want to do it too different or too weird. You can never outdo an original song.

“Monkey Funk,” another song of yours that I love – so far I can only find it on YouTube. Any plans to record this one?

DB: It’s funny because a lot of people have commented on that. There are a couple songs we had that never made the album. I think we wrote thirty songs for the album and ten are on the album. Our plan is that eventually we will release B-sides – we’re going to do something – maybe a mixtape. Do something funny that shows another side of our music. Hopefully we’ll get the time and the chance. We’re starting work on the next album now. Once we’re not on tour we’re going to write again.

It’s a little bit hard. We put together ideas and write down a couple things but you can’t intensely write, and that’s how we usually do it.

Where did you and Søren meet?

DB: We met in Copenhagen doing our own sort of thing. We hadn’t given up on music but we didn’t know what to do with our individual music, and we had a mutual friend. He wanted us to record a song at his studio. During the lunch break we both started to talk and found out we were both writers and singers. We decided to meet up, and we ended up writing three ideas for songs that were really good. We would meet up whenever we had the chance, without ideas – kind of went back to the basics of enjoying it as a hobby. We just thought, fuck it, we’ll just write music and that’s it. If nothing happens with it, it doesn’t matter as long as we’re having fun. So we did that for about three years. After three years we had songs like “Monkey Funk,” “Yeah Yeah Yeah”. “Yeah Yeah Yeah” we had just done at the end when we decided to form a band. We actually wrote “Monkey Funk” right before “Yeah Yeah Yeah”. That’s where we got the “Yeah Yeah Yeah” idea from – when “Monkey Funk” breaks down and we started talking. . . this is the anthem! 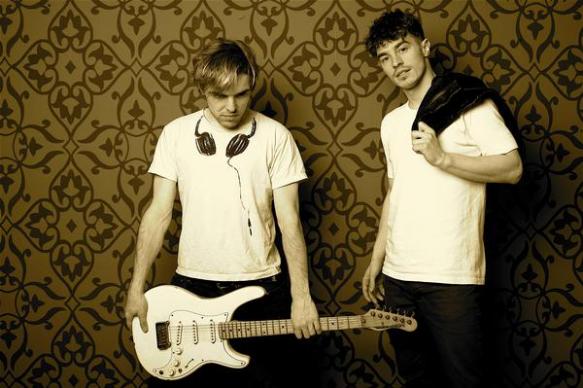 I was reading that you two have already written three hundred songs together?

DB: I wouldn’t say they’re complete. A lot of them are. We had a couple songs like “Stress” and “Remember Me” and we were an actual band. I read about this competition – we entered and found a drummer just to see what would happen. Next thing we know we ended up winning and people started paying attention. UK jumped on it, then America. When the labels out in the States started showing interest we just packed our bags and left.

DB: I should do more of them. I think it was Gordon at RCA had an idea of doing this dance bomb thing. Go into the area, dance and then walk out like nothing happened.

I also saw in an interview where you mentioned reading some books that seemed very sociological or economics-oriented.

DB: I’m not the best reader but I definitely like it. I think knowledge in general is vital – the key to power. I haven’t always been the best. When I’m on the road I try to read as much as I can. At that time I had just read Ruled by Secrecy by Marrs. I don’t know how factual any of it is. It’s sort of investigative, looking at society from a different perspective. I’m definitely a firm believer that things aren’t exactly as we think they are. I think there’s more than what we’re taught to believe. There’s not just one way. You can walk across the street a thousand ways. Mankind always does things in the hardest way. Something is not being done correctly or smartly. Our lyrics sometimes might seem rebellious. We’re people. We have our disagreements, our questions just like everybody else.

What’s the response been to New Politics in Denmark?

DB: We never had the chance to build anything in Denmark. After we won the competition things just kind of bubbled for us. We didn’t even have an album out. Having the opportunity to move to the States and sign with a major American label – International label – there was nothing to think about. We’ve played two concerts there since. It was good coming back there. The album only got released there in February.

Are there songs you’ve written that came out completely different from what you planned?

DB: Definitely. I think there’s quite a few. It’s also sort of the writing process – working off each other. “Dignity” had that effect . . . and “Yeah Yeah Yeah”.