Seapony sounds like Seattle’s thoughtful answer to Lush, only more bubblegum and able to master a restrained “three minutes max” format better than the UK band ever could.   They’re definitely a sentimental-on-a-sunny-day type of outfit and the only band at The Crocodile last Friday night that contained no shred of eighties machinations.  Although Seapony is gently fuzz-soaked by nature, vocalist Jen Weidl wasn’t easy to hear and the entire sound was a bit muted during their opening set (someone next to me commented that it sounded as if someone had forgotten to plug in one of the instruments).  Despite the less than optimal sound, Seapony effortlessly won me over and I look forward to hearing what Jesus intended them to sound like on their debut album, Go With Me, out May 31 on Hardly Art.

Next up was the sleeper hit of the evening, Twin Shadow, who seemed to have been the secret handshake band of the evening. (Everyone knew who they were except me, and everyone was absolutely crazy about them).  In doing my post-show homework, I found that George Lewis Jr. is the driving force behind the Brooklyn-based Twin Shadow, and as a band they’re an unlikely success story given Lewis’s birth in the Dominican Republic and younger years in a small Florida town.  Lewis and company delivered a slow-building amalgamation of new wave-tinged electronics and heartfelt crooning, eventually warming into a crescendo of guitar interplay that felt a little more interesting and uniquely their own.  Once Twin Shadow sheds the past, they could become something very interesting indeed.

Finally The Pains of Being Pure at Heart took the stage to a full house, although a fair amount of people departed just after Twin Shadow’s set.  Of the current crop of retro-modern bands (Twin Shadow, Cut Copy, etc.), The Pains of Being Pure at Heart are the only ones whose biography references House of Love- always a top notch influence- and they boast some serious shoegazer street cred in the production team of Alan Moulder and Flood (Ride, MBV, Smashing Pumpkins) for new album Belong.  They make no secret of their influences- which is, ironically, somewhat refreshing. The Pains of Being Pure at Heart are very much a band romantically attempting to resuscitate a bygone era, but they do it with spirit. Anyone can be a watered down version of Ride these days, but who can actually make it worth a fresh listen- or better yet, worth getting jostled at The Crocodile for an hour and a half?  The Pains of Being Pure at Heart sounded inspired and sharp as tacks, barreling through song after song like a true rock and roll band, which is what jangly indie pop and shoegaze harkened back to at its best moments. At this point, most rock fans are past caring about music set in a time capsule.  The only way to go from here is up. – J.Price 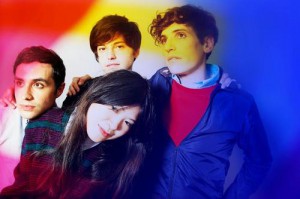