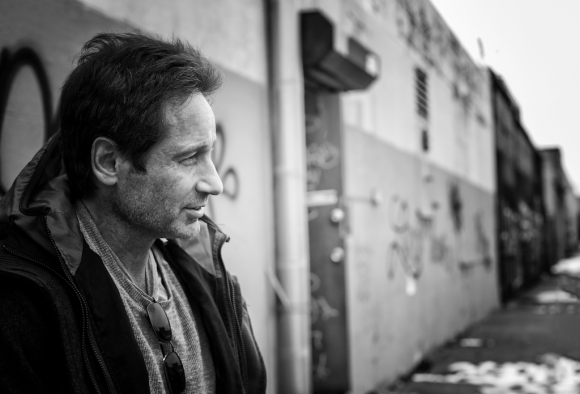 David Duchovny is well known for his acting career – everyone knows he was Fox Mulder in The X-Files. To many die-hard X Files fans, he will always be Mulder, and so it might be difficult for them to see him doing anything else. That Duchovny was able to gain acceptance in other roles (Hank Moody’s Californication earned Duchovny his second Golden Globe win; Aquarius‘ Sam Hodiak displayed a man with appealing personal struggle) proved the Mulder charm was down to him. While you should envy Duchovny’s skill set, which includes writing (his books are extremely well reviewed), directing, and producing, there’s even more talent: singer-songwriter. He actually released an album called Hell or Highwater three years ago. Most Duchovny fans are aware of this by now. As one of those I’d place firmly in the category of David Duchovny fan, I was intrigued. Would it be good? Would it be too difficult to separate the actor from the songs? Turns out it’s a great album with moving, personal songs you can inhabit apart from his celebrity. Duchovny manages to share his soul in twelve superb tracks I’ve listened to repeatedly. I love the album’s natural, rock sound.

Duchovny and his band, Weather, will play the Crocodile this Sunday, February 19th. This is so exciting I could write that sentence repeatedly, but I won’t, because I have this big news: I talked with Duchovny recently about his new project. In person, he’s charming (I knew it!!), and totally focused on whatever art he decides to take up.
~

I really love the album!

How did you find your band for the album and shows?

DD: I started out on my own. All the songs were written in a room, just folk songs for myself, in a way, and I started working with a brilliant guy in LA named Keaton Simons. He’s an old friend. And we would put the songs together. He’s a great musician; he plays all the different instruments, and he would make the backing tracks for me, and I would try to sing over them. They were just for me really, and then Keaton as working with this manager named Brad Davidson. It was really Brad who said, hey, we can actually make these into songs if you want to record an album. I said, sure. I just went along for the ride, really. Brad really pushed it, and Brad found Colin Lee and Pat McCusker and these guys that worked in Boston, which was where he was based. They became the band that recorded the songs, and the band that I’ve been writing all the songs for the second the album with.

That’s so cool. Are you almost finished with the second album?

DD: Yeah, my work is done. Now it just really needs to be mixed.

What kind of things did you learn from making the first record? Was the second one easier to do?

DD: I don’t know if easier is the word, but it felt a lot more comfortable. I remember the first day recording vocals, on the first album, I was just a mess because I just thought I’m not a naturally-gifted singer at all. We were trying to get this one song down, and I just kept on screwing up. And I thought, this just a huge mistake. Once we got past that, I got a little more comfortable as the week or two of recording vocals progressed. But this time, I’ve been working on my voice for probably about three years now, working with a guy named Don Lawrence in New York. I do vocal exercises almost daily. I’m never going to be a great singer, but I have a better idea of what I’m trying to do now. So when I went in to record the albums on this album, I was a lot more comfortable.

I really like the vocals. You never know, with someone not known as a singer. . .

DD: Thank you. I think it was David Byrne, from Talking Heads, who said the better a person’s voice is, the less he feels moved by it. In a way not having a great voice, you’re constantly running up against your own limitations, and there’s something poignant about that, I think.

A lot of good things have seemed to have happened from the album. I think you may have reached some new people.

DD: Definitely. Nothing I ever do will have the global impact of The X Files, and that’s fine. That’s a really unique phenomenon in show business. When I started this, I didn’t think I’m going to have the number one song on the radio. I don’t think that I do the kind of music that would get there anyway, at this point in our music history and listening habits. Just the fact that I can have any kind of group following would be enough. The fact that I can fill a venue is amazing to me, and I’m really grateful and thankful that I get to go out and play music live. It’s such a different experience from anything I have done as a performer, in terms of reaching people in the moment. Making a human connection. I’m not playing 40,000-seat stadiums; I’m playing in venues of 500 to 2,000 people, so it’s intimate. It’s a real evening. Something happens between a band and a group that size, that is real.

Do you remember what your first live show was like?

DD: It was terrifying. I think it was at a radio station up in Connecticut. They had a little performance space, maybe for a hundred people or so. We had a portable keyboard, a guitar and me. I don’t want to do that again. But you know, once the first time’s over, it’s over. I realized at one point, that people are not coming to hear you make mistakes, which is what I felt, first of all being an actor, people want to ridicule me. But that’s not true. Certainly you’re gonna get those people, but for the most part, people want to enjoy what you’re doing. They don’t want to dislike what you’re doing. It’s more fun to enjoy something. So I felt, okay, once I got over the feeling that I was going to embarrass myself, I thought, what the fuck if I do embarrass myself? It doesn’t matter. I love these songs. The intention of these songs was to express something, to make a connection. That’s what I’m trying to do as singer. Whether I do that perfectly, note for note? Probably not. It’s just not what I was given. But I’m trying, and I’m making the same connection whether I hit the right note or not.

I noticed you’ve reprised your role as Denise on the new Twin Peaks. What has Denise been up to?

DD: Oh Denise. That’s a good question. I do know that she has continued in her career in law enforcement and has moved up the ranks in the Drug Enforcement Agency.

Great!. . . Since you write as well, what kind of books do you read?

DD: I always try to read new fiction. I have a book by Rachel Cusk right now that I want to read. I’m also in the midst of writing something, and when I write, I can’t read because I end up just ripping it off. I end up writing what I’m reading, unconsciously.

I always wonder if that happens with writers.

DD: It can happen musically, like I can’t be listening to one person over and over if I’m writing a song, because I’ll probably end up writing their song.

There were some complimentary things I had read about Leonard Cohen and you! Was he someone you listened to a lot?

DD: That’s nice. I would say I’ve become a bigger Leonard Cohen fan as I’ve gotten older. I didn’t listen to him way back when. I was a bit more of a Dylan guy, Beatles, Stones. . . Zeppelin. Obviously my music is not like Zeppelin but I do love that heavier stuff. I love Petty. In high school I loved Steely Dan, Springsteen, Sly and the Family Stone. . . Jacksons. I’m a funk fan. . . rhythm and blues. I’m kind of all over the place.

That’s a good group of artists. . . So, Gillian Anderson made a surprise appearance at one of your shows. What do you remember about that?

DD: That was my first performance in New York. That was really the album release performance. I remember being nervous at that, and I think we had just said we were going to do more X Files, and we were going to do the Television Critics Association Awards. Gillian was in town to do that the next day. I just thought it would be fun if she came up and sang a song. She didn’t know any of my songs, but we were going to do a cover of “Helpless” by Neil Young. I got her on the phone and she rehearsed over the phone with the band to get the key she could sing it at. That was that.

Cool. Now, the song . . . “David Duchovny.” Great song, and I see Bree Sharp performed it at one of your book readings. Did you reach out to her?

DD: This could be wrong, and I am sure Bree will correct me if it is. . . Bree and I communicate maybe once every three years. I think she called or emailed me while I was in the car on the way to the reading. I emailed her back and said if you’re in New York, come on bring your guitar and play the song for the folks that came to the reading. I think that’s how it happened; most of my stuff happens at the spur of the moment like that.

Were you aware of that song when it came out?

DD: Yeah. A friend of mine was doing a country movie, at that point, like a mockumentary, and he came across that song. He sent it to me, and I thought it was funny. It got to these guys who were working on The X Files, and they made a video using a lot of famous folks lip-syncing to the song. That’s actually what made the song a bit of a viral hit back in the day. You had this video with Brad Pitt, Gary Shandling, Kevin Nealon and Buffy the Vampire Slayer. The song is really good.

I love it. Another thing I loved was Aquarius.

The show featured, thematically, the Beatles’ song “Helter Skelter” quite a bit. What is your favorite White Album song?

Have you heard Siouxsie & the Banshees’ cover?

DD: I’ll listen to it. There’s actually a book coming out called In Their Lives, and it’s an anthology of writers writing about Beatles’ songs. I have a little essay in it on “Dear Prudence.”

There’s another connection. Awesome! What can you say about the theme of your new book, Bucky F*cking Dent?

DD: I think it’s an old-fashioned, plot-driven, love story, father son story kind of book. It’s not a thriller, but I think it satisfies in a plot way. It has a lot of heartfelt and difficult emotion in it. I think it’s also very funny.

Last question: What was your favorite new X-Files episode? Mine was the Rhys Darby one.

DD: Probably that one as well. I’m a big fan of his, and I laughed a lot working with him. It was a very clever episode – very smart. I love Flight of the Conchords, it’s one of my favorite shows.

While Sunday evening’s show is sold out, Duchovny will also read from of his book and talk with writer Jess Walter at Town Hall in Seattle at 1:PM on Sunday afternoon. Tickets for that event are available here.