The wonderful duo JOHNNYSWIM headlines the Neptune tomorrow evening, Friday October 14th. Combining folk, rock and pop, husband and wife team Abner Ramirez and Amanda Sudano are now on their fourth LP, Georgica Pond, an album with lovely songs – including one with none other than Vince Gill! JOHNNYSIM is well known for passionate shows, with music drawing from deep emotion. After meeting at church in 2001 and then continuing their own lives, Ramirez and Sudano didn’t reconnect until four years later, being introduced again by fellow musician Mat Kearney. How fortunate are we that fate brought them together? Very. They continue to create beautiful together, and the partnership has also created life last year with the birth of their son, Joaquin. Very special side note: Amanda Sudano is Donna Summer’s daughter. I’m so happy to see that Summer, who remains one of my favorite singers, has such a talented daughter. While Sudano is her own artist, of course, I can at times hear Summer in her voice. So awesome.

How is Joaquin? I really love the updates on your Facebook page!

Before we had him I didn’t think about how we’d be travelling, and bottling our dreams and having him at the same time. I had a good friend tell me, before I got pregnant, that babies are portable. I didn’t realized how focused I would be, because my time is somewhat limited. I’m not always available, but when I find that I do have the time, I’m focused and happier to do what I love.

Does he go on tour with you?

Amanda: We’ve put him on, like eighty four flights, and he’s been traveling with us since he was seven weeks old. There’s only been a handful of shows where he hasn’t been somewhere nearby, and that was to keep him at home, to keep a routine.

You are two very positive people. How do you maintain such positivity in an industry that can be very difficult?

Abner: I think it has a lot to do with how we were raised. My parents came here in 1980 during the Mariel boatlift. They came to find opportunities. I was born in the US, but my two sisters were seven and eight years old when they came. I remember when I graduated high school, my dad almost kicked me out of the house, saying, “What do you want to do?” And all I could think of was music. Growing up in the Westside in Jacksonville, Florida, pursuing music as a career isn’t something that anybody you know has even tried. It didn’t seem like a real thing I could do. I was struggling to commit to a college. I wanted to play music for a living. He said, “Where do you have to go to do that? New York, LA, or Nashville?” He said, “We can’t afford New York or LA, so let’s get you into Nashville.” So my dad dropped me off at school, Trevecca Nazarene, and my said to me, with a tear in his eye, “Don’t come home until your dreams come true.” But then he called me and said, “You know I mean don’t ever come home, just don’t give up.”

It’s funny, I was talking to our manager today, we talked about how so often, we found true, that it’s not the great times that define you, or the great times that even chart your course – it’s how you handle the bad times. We see negativity. It’s not that when we get bad news we ignore it. We’re really lucky to do what we love for a living. And of course there’s bad news, bad times, hard times. We’re committed to seeing them through because we believe it will just make us stronger. 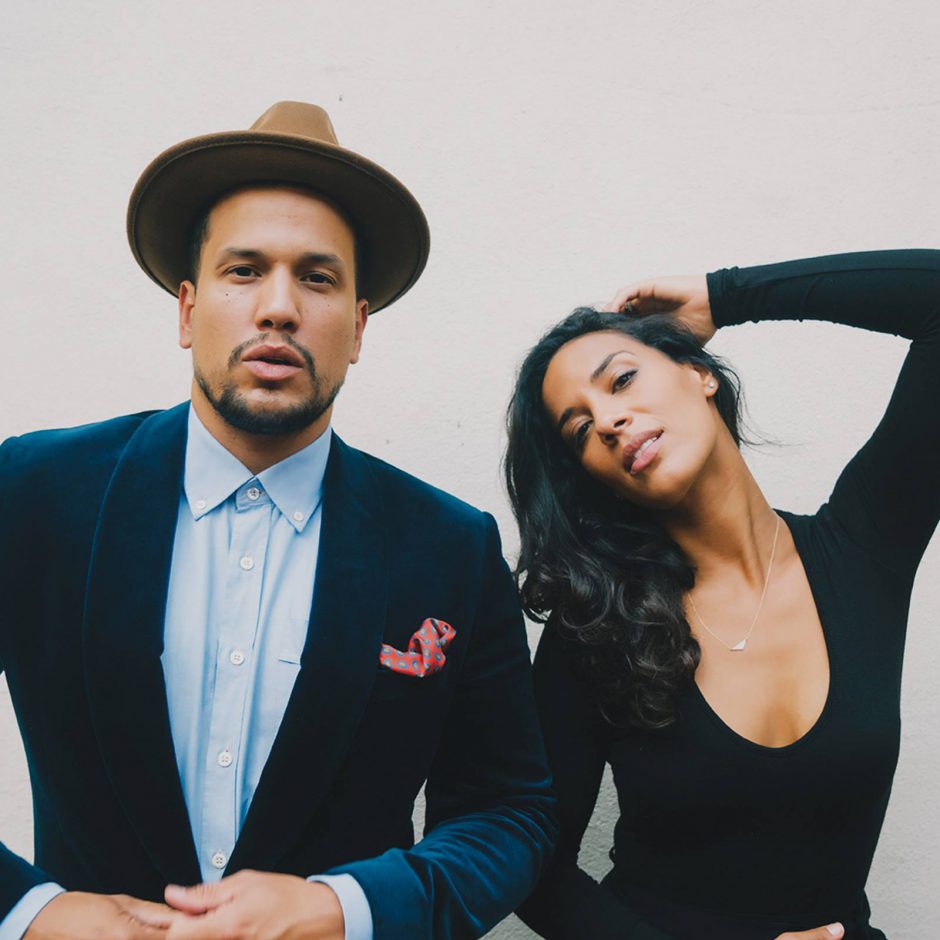 What was it like starting out as a duo?

Abnber: People mocked us, “Are you trying to be Sonny & Cher?” We had eight years in complete obscurity. It was impossible! We did it because we loved it. We weren’t going to stop making music, so we might as well make it together.

Has touring affected your songwriting?

Amanda: Yeah. I think in our live shows is where we found our voice the most, it’s where we let ourselves be extra free. There’s energy and freedom in the room. I think it’s taught us to trust our instincts.

How do you decide who will sing which parts of a song?

What made you decide to make a Christmas album? (A JOHNNYSWIM CHRISTMAS was released in 2014)

Abner: We’d just gone on a Christmas tour. Christmas in our house is our favorite time of year. Amanda, it turned out, just wanted an excuse to listen to more Christmas music during the year. She started research in May, playing Christmas music all the time.

Did you go through rebellious stages as teenagers?

Amanda: My rebellious stage was going to college. My parents, knowing how much I loved music and singing, were encouraging me. But I thought, no, maybe I’ll be on the business side. I would joke with them that graduating from college was my rebellion.

You had two introductions before you got together?

Amanda: We first saw each other at church and then we didn’t meet until Mat actually introduced us four years later. I think those four years were definitely needed for Abner to get out of his rebellious stage.

Abner: I am so grateful I had those four years, because I needed them to grow up. I was a bit of a handful.

Amanda, you mentioned in another interview that a Vince Gill album was one of the first cassettes you bought. What was it like working with him on “Lonely Night in Georgia”?

Amanda: It was so surreal. I was so happy. I think my cheeks still hurt from how much I was smiling the whole day. I think I contributed the least to that song of any song on the record, only because I was so excited I couldn’t even think properly. Everything was awesome. We were writing with Vince Gill. That was a dream come true.