Fat White Family returns to Chop Suey this Friday, April 22nd. A lot has happened in Fat White Family’s world since their 2014 debut Seattle show. The band was forced out of their home above a pub, Queen’s Head, in Brixton, London; they toured constantly; and they released album two, Songs for Our Mothers in 2016. Three years earlier they debuted with Champagne Holocaust, which had some righteous songs on it, such as “Cream Of The Young,” “Is It Raining In Your Mouth?” and “Without Consent.” In a twist of that curse of the debut album so often being the best a band releases, album two, Songs for Our Mothers, is mostly greater. Fat White Family’s music has a slinky, sexy grooviness to it; however, the lyrics, when you can make any out, deal with the strange. They deal with the ordinariness of the strange too: “Goodbye Goebels” imagines the last moments of Hitler in his bunker. But it’s a love song.

Fat White Family has two brothers in it: singer Lias Saoudi and organ/keyboard player Nathan Saoudi. The entire sextet caught the eye of musician and producer Sean Lennon, who ended up producing the brilliant “Satisfied,” at South by Southwest in 2015. The also brilliant “Whitest Boy on the Beach,” a frightening “Duce,” and the just weird and wonderful “Love is the Crack” and “We Must Learn To Rise” would be spooky fun performed live. Warning: Fat White Family shows are known for their wildness (singer Lias Saoudi strips naked with some well-documented frequency).

Fat White Family’s organ/key player Nathan Saoudi and I talked a few weeks ago to prepare for what should be a memorable show.

Are you on tour at the moment?

Nathan Saoudi: I just came over to LA. We have three weeks before the tour, and my brothers’ missus lives in LA. I don’t have any place to stay in London. It’s a rip-off over there. We played a big show a couple of weeks ago and I had to scrounge around for a fucking couch to sleep on. It’s bollocks over there. It’s the most expensive city in the world.

You need to move over here.

NS: “Touch the Leather.” Apart from the cameraman, that cost us about £3.42. We went in there with raging hangovers, and put down the ideas very basically, and then just went on with it. It took about an hour.

That’s awesome. It’s just one-take? And who’s in the background?

Are you on a skateboard?

NS: You know those things that amplifiers are put in? At the bottom’s there’s wheels. I think it was one of them. They [other band members] were just sitting there laughing.

I love that song. What do you think makes it a fan favorite?

NS: It’s an abstract lyric. It’s got a lot of blues shade, followed by a red shade. There were two versions of it; live and electric. The one on the video is the more electric version. 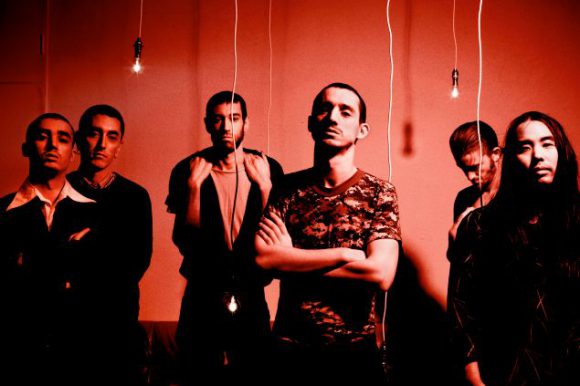 How did you choose a song for your appearance on David Letterman?

NS: I think our decision was the wrong decision. I think we should have done “Touch The Leather.” It’s the one that most people get. It was kind of strange because our guitarist wasn’t there. It was over and done with so quick. [They played “Is It Raining In Your Mouth?”.

Given the way you attack keyboards, how many have you broken?

NS: About 60. I don’t even know how to play them, so I end up breaking them out of frustration. I started about four years ago. I should spend more time learning, but I’m a lazy piece of shit.

You learn as you go.

NS: Or you can ignore it as you go.

In the video for the “Whitest Boy On The Beach,” the entire band shaved their heads. Was that traumatic?

Are any topics off limits in a Fat White Family song?

NS: I don’t think any stone should be left unturned. Everything should be discussed. Whenever you don’t talk about things, you harbor some kind of pain or resentment. It’s all right to talk about everything. I’m not saying bigotry, but discussing things. Open things up a bit.

Your family moved around frequently, Northern Ireland. . . England. . . when you were a child. Where do you consider yourself coming from?

NS: Depending on the situation I’m in, I kind of change it. I’m not dedicated to one place; I’m not patriotic. It just makes things easier. But then you’ve gotta say where your parents come from. I’m glad I’m not a purebred though.

Your dad moved Algeria to the United Kingdom. Do you visit Algeria?

NS: The last time I went was eight years ago. I’m planning to go at the end of the year. You cleanse yourself. There’s no booze. There’s no distraction. I love the place. You go the Internet café, and the letters that are rubbed off they keyboard are S-E-X. They need release. The only problem is the way women are treated.

Your brother posted a pair of your dirty underwear for sale on eBay. How weird did that feel?

NS: Yeah I don’t get why anybody would want to buy that. I don’t think anyone did buy it. It’s probably someone in LA who goes around celebrities’ houses to see if he can sell them on ebay. They do that in Japan, don’t they? They have vending machines with girls’ knickers. What pleasure in life would you get from that?

Which Fat White Family album do you prefer?

NS: I’d say the second. Musically it’s got more depth to it. I like some of the first one, but it’s a bit more garagey. After you go around touring playing the same set of songs, you want to play new material. It’s refreshing to play new stuff you’re gonna be fond of.

I read that Sean Lennon let you use some the Beatles’ equipment he has in his studio.

NS: He did. His studio’s surreal. He’s very down to earth. Considering his background, he could have been a self-indulgent piece of shit, but he’s not.

Where did you film “Cream Of The Young”‘s video?

NS: You know the room in the video for “Touch the Leather?” It was above that room, the room we used to practice in. I slept in that pub for two years.

You recently toured with Black Lips and Palma Violets?

NS: That was an NME tour (Palma Violets). The Black Lips was a European tour. That’s the one that ended with my brother getting pneumonia, coughing up blood. Black Lips are a lot better than Palma Violets.

You played in Paris at La Cigale on November 13th, 2015. What was your experience of that night?

NS: They told us to stop playing about 3/4s of the way in to our set. The President, Hollande, was aching to bomb Syria. Of course that shit is gonna happen.

In Paris, all the ethnic minorities are in a circle around the center of town. In town, it’s dominated by white people. It’s visibly racist. So if it’s gonna happen, it’s going to happen there. They’re one of the more racist countries in Europe. They’ve got a real divide between the North African, Middle Eastern Muslim Community. . . and the rest of them. They’re not integrated. In London, you’re walking down a road, and it’ll be like an estate or something, all different types of people live in that estate. Then you cross the road, and they’re posh houses, living side by side. France is a lot more divided. That kind of shit brewing up in that part of the world doesn’t shock me. It’s a reaction. Lots of people in Iraq, Syria, Afghanistan lost whole families. Imagine the pain. How would you get rid of it? You got nothing. All the people you most love in the world are dead. You’re probably going to seek revenge. People are broken hearted. If they weren’t totally devastated, and if all the people around them weren’t getting murdered – by the west – they wouldn’t have any reason to turn to an extreme end. I’m surprised it doesn’t happen more often. If someone killed my family, I’d find the people who did it. You’d turn into a psychopath.