Something seemed off as Hannibal Buress stepped out onto the Neptune stage. His words initially came out slow and stilted – almost uncertain – even though he was only thanking his opener, Kortney Shane Williams. Had all of Buress’ recently received attention (both earned from his standup and unwanted from an offhand joke during a Philadelphia show) finally gotten to him? Not quite. Turns out Buress was just setting up for what might have been his biggest laugh of the night, when he mentioned he had missed a portion of Williams’ set and asked the audience: “Did he do any jokes about ruining Bill Cosby’s career?”

Buress likes to play with energy and expectation, going from thoughtful mouse to roaring lion in a heartbeat, vaguely reminiscent of a Bill Hicks or Sam Kinison. Except Buress’ energy never becomes unhinged. It isn’t the gag itself as it could be with the other two. Buress just likes to lull us in, then punch us in the ribs to make sure we’re awake and paying attention. 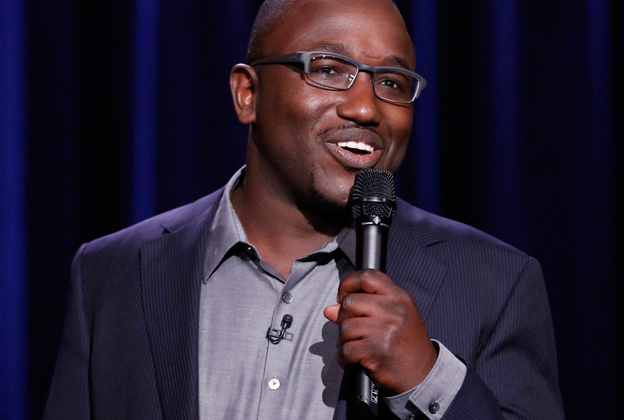 Can a comedian have ‘swag’? Chris Rock did in his heyday, prowling the stage smooth and confident. Buress dials back Rock’s swag a notch physically, again keeping it in a controlled place, even while taking it a step further in concept: Rock just had jokes about hip hop, Buress actually had his DJ on stage with him, with 10-20 minutes of material based around audio from his favorite tracks (at one point he went through 5 or 6 songs that all began with rappers talking about their morning wood).

It’s hard to know if Buress is trying to innovate on the format of standup itself, trying to merge hip hop culture into comedy and be a true crossover artist, or if, like most comedians, he’s just riffing on what he finds funny in life. My bet would be on that last one, with the first two happening by accident anyway. At one point Buress’ choice to have DJ accompaniment was the joke. Lamenting a recent hip hop show he saw at which the MC lazily jumped in only at the end of his pre-recorded verses, Buress wondered aloud if he could pull that off in standup. Then he did it – his DJ playing pre-recorded bits from past Buress shows – and the here-and-now comedian joining himself for only choice words and accents, striking poses after each one.

Perhaps more than anything, Buress likes to play with context. It was the punchline to an early joke about how everyone loves fireworks, unless you’re a major-league pitcher and the ballpark is setting them off because someone just hit a home run off of you (“Oh no, context is everything!” he cried, staring up at the imaginary fly ball). But the conceit permeates almost every aspect of Buress’ routine. What happens when you bring hip hop DJing and MCing into the context of standup? Sure, the steroid boom in baseball in the ’90s is looked down upon, but how many fathers and sons had great moments at baseball games because of it (“PCP never did that shit”)? Iggy Azalea’s “Fancy” was the hit of last summer, but the bass line might also sound like “something you might play to tell someone they’re stupid without using words” (cue the DJ).

At heart, Buress is an observational comedian, but he’s not picking on easy targets like Seinfeld with airplanes or Carlin with the English language. Buress’ sharpest material is observational humor taking place at the bottom of the rabbit hole. It’s not enough for him to just talk about the process of his recent LASIK surgery; Buress has to go deeper, into an imaginary world where the surgery has gone wrong and left him blind, wildly increasing his popularity as ‘The Blind Comedian’, but also making him a crappier comedian with jokes that only revolve around his remaining senses (“I was in a bakery the other day – man, all those smells, right?”)

Buress has all the trappings of a top-shelf comedian; it’s easy to see why he’s a star on the rise (at last year’s Oddball Comedy Festival at The White River Amphitheater, Buress came out and did ten hilarious minutes just about the gnats flying around his head). But it’s that ‘rabbit hole material’ – those touches and taglines of the absurd delivered straight – that separate him from the pack and keep him in your mind long after the show is over.

The Neptune performance culminated with Buress bringing out a slew of ballerinas while he performed his “#1 hit”, what at first blush sounded like a bona-fide, tough-nosed hip hop banger, complete with his DJs’ backing accents. When Buress broke down the song and taught us all the “lyrics”, though, we learned that it was a bunch of non-sequiturs – references to socks, jeans, and “chicken dicks” – and a few verses of literal gibberish and mumbling. In hip hop you can never have enough swag, in comedy you can’t have too much. Context is everything.