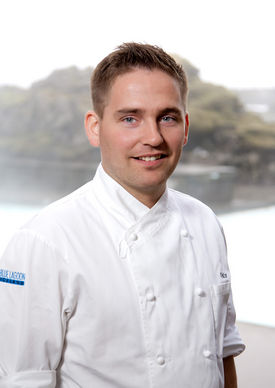 Last night at the Dahlia Lounge I attended a special preview dinner of the Taste of Iceland‘s special menu. The menu, created by Icelandic Chef Viktor Örn Andrésson and Dahlia Lounge Chef Brock Johnson, includes traditional Nordic food such as lamb and pickled herring, and, with the addition of more unusual items to an Icelandic plate – for example, there is no sunchoke in Iceland – the creations were unique and absolutely delicious.

Chef Viktor, head chef at the Blue Lagoon‘s LAVA Restaurant, won the 2014 Nordic Chef of the Year. The Blue Lagoon, located in Grindavík, is a geothermal spa, and a prime destination. That’s no wonder. I think, if I lived there, I would never leave.

As I and the other attendees were served our food, we got to mill around and talk. Excited to get my hands on the food, I hurried over with probably impolite haste to the first item: pickled herring. If you’re a fish lover, most likely you go for pickled herring. Viktor’s and Chef Johnson’s offering had tart and sweet sides I enjoyed. The next dish was cod that, with fish sauce and crispy ham, was fresh and creamy. Last was a tender lamb with sun choke and mushrooms. Let me stress again how much I loved that lamb.

I got to talk one-on-one with Viktor, who mentioned in his speech to the attendees that chefs don’t always eat the fanciest of foods while off duty. And what does he partake in at times? “I like ribs, hamburgers, pizza, coleslaw – but I can’t do it all the time because. . .” [indicated he would put on weight]. I also wondered how he got into cooking. Did he mess around in the kitchen as a youngster? Viktor related, “I was in high school, and I didn’t want to be there anymore. I came home and told my mom, “I quit,” and she said if you’re going to quit school, then you have to pay to stay in the house. I worked in a restaurant as a dishwasher and I asked if he could help me be a chef student.” Viktor affirmed “Why not? It was as close to school as I could get.”

For the Dahlia Lounge’s menu, Viktor told me, he thought “about the texture. Fish is soft, and the vegetables are almost raw. [There’s] crispy ham and crispy croutons, so when you eat, you get all the texture. The fish flavor is salty, and then you have the sour and sweet. . . it all comes together.” I saw so much enthusiasm and creative energy in Viktor that it didn’t surprise me he won a competition such as the Nordic Chef of the Year, which was a mystery basket competition; “Twelve hours before we found out what were going to cook,” Viktor explained. Although a chef would come prepared with ideas, a mystery basket competition would definitely keep you on your toes. And it makes sense Viktor is able to do this – he’s also into motorcross. With an impressive tattoo in progress of a Valkyrie on his right arm, he added, “I like all the dangerous stuff.”