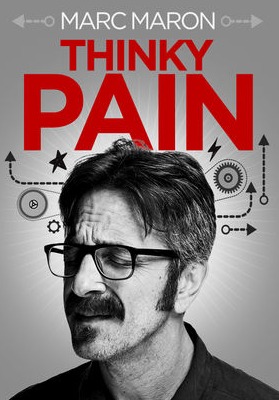 Marc Maron was once the clean-shaven, shorthaired guy with the snarling wit and small bifocals. He donned the standard open sports jacket issued to male comedians of the era. He was the skinny, wiry, angry guy.

That’s the Marc Maron I remember from my youth, but that wiry combative comedian is mostly gone – washed away with the drugs and alcohol that nearly derailed his life. Today’s Marc Maron – now 50 and starring in the new standup special Thinky Pain – is shaggy and sports a bushy moustache. He’s dressed as much for a walk in the woods as for stand-up comedy. His movements and words are less taught; the hard-edged antagonist has settled into the role of slow-moving curmudgeon.

Of course the anger is still there, but the object has changed. All of Maron’s petty anger is ultimately subsumed by his meta-anger, the one aimed at his own nature and his inability to escape it – or at the very least – tame it. It’s comedy as open-ended therapy, with Maron as both patient and shrink. Bits don’t begin with segues, they begin with declarations like “Let’s work through this.” Maron is Richard Lewis if Lewis also did podcasts with Jack White and cared about tube amps and bought Captain Beefheart records.

A story about doing a morning radio interview begins with a quick meditation on waking up at 5:30 AM (“5:30 is bullshit. I mean is it day? Is it night? What the fuck is that?”). It wades into a tangential flashback of late nights and early mornings from his coke-possessed past. It morphs into a story about calling a hotel lobby at 5:30 in the morning for a toothbrush, getting no answer, and immediately assuming he’s one of the few survivors of a zombie apocalypse. Finally, it becomes a clinical dissection of his odds of surviving that zombie apocalypse given his self-classification as a beta male.

Maron’s stories expand or contract given his mood or the mood of the audience. They spring from a word, a thought, or theme: hypochondria, atheists, vegans, pornography. At one point he tells the audience “I didn’t prepare. Did you want me to prepare? Preparing is for cowards.”

Maron may not script his performances beat-by-beat, but his experience in the past decade – from hosting liberal talk shows on Air America radio in the mid 2000s, to interviewing on his popular WTF Podcast during the last four years – he has honed his skills as a conversationalist. Even when he’s not specifically talking to someone, he’s moving a conversation along. After twenty five years, Maron is still a standup at heart, though; Thinky Pain is filled with plenty of well-timed verbal jabs, disguised jokes, and callbacks to keep it from ever falling into the pure narcissism Maron so often accuses himself of.

Self-indulgence is a danger for an observational humorist that mainly observes himself, but for Maron that danger must be part of the appeal as well, the “juice” as he calls it. The only thing Maron pursues with religious zeal is closure. Almost every story has an undercurrent of “now vs. then”. In the titular bit, grown-up Marc gives advice directly to his pudgy child self after an attempt to catch a fly ball in a baseball game ends with him falling down and the ball bouncing off his face. “There’ll be no more chance of physical pain from here on out, only ‘thinly pain’. . . It’s gonna take a lifetime to walk this off.”

Maron is still walking off his disappointment and baggage, but he’s found a way to enjoy – and create entertainment – out of that process. He’s at his most honest now, which is when comedians are at their best. And he’s found a way to control the ride without white-knuckling the wheel. His WTF Podcast continues to grow in popularity and season 2 of his television show, Maron recently debuted on IFC.

As Marc Maron would say, he’s working through some things.