The Airborne Toxic Event @ Showbox at the Market, 04/09/13
Show Review by M. Crossley

What happens when an aspiring novelist weathers a nasty breakup, finds out his mother has been diagnosed with cancer, and discovers that he himself has been stricken with a few genetic diseases all in the space of a few weeks? Well, if you’re Mikel Jollett of Airborne Toxic Event, you write all of that trouble down on some bar napkins and begin writing songs about it. Any one of those things taken singly would be enough to shake most folks’ worlds apart for a good while, but Jollett chose to channel his despair through the highly literate vehicle of his band – a band as receptive to the nuances of jazz or lush string arrangements as it is akin to rock ‘n’ roll. I found the group’s 2008 debut to be a breath of fresh air that resided around the edges of format laden radio rock. 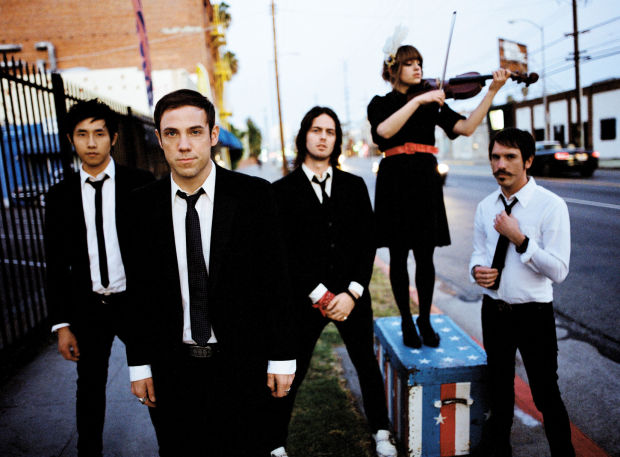 The group’s first hit “Sometime Around Midnight” was a poem set to astral aural tapestries. The music breezed and swooned, the poem wrenched your heart. Followed later that year by “Wishing Well,” a number transfixed by the randomness of life and that we have no more control over than the tossing of a coin. It was a solid debut album that garnered much critical acclaim that year, but after that they kind of fell off my radar for a bit.

The Airborne Toxic Event came through Seattle’s Showbox Theater on April 9th, on the eve of the band’s third album Such Hot Blood, rumored to be released later this month. The venue was packed for a weeknight. The crowd was diverse. Maybe I’m not used to seeing bands perform that have an awful lot of mainstream media support, but there were people there that were my mother’s age, some college age revelers, and just about everybody in between. These didn’t look like rockers, and I was curious as to how the night would play out. Would there be a mosh pit? Aggressive dancing? Devil horns thrown to the sky and headbanging?

The band hit the stage and went straight to work with “Gasoline,” definitely one of the more upbeat numbers from their debut. The lyrics look back on a teenage love affair, and what could’ve gone differently in their lives had the protagonist just gotten them out of their dead end town in time. “They tell me that, you’re married now. Oh my dear, I fear I can’t understand how.” True words, those.

“Something New” followed, the first half of their set relying heavily on the mid tempo tracks from the debut. I recognized a few numbers from their sophomore album, All At Once a bit later in the set, with the closer’s being, expectantly “Sometime Around Midnight” and “Wishing Well”.

The band played in top form, and moved around the stage with aplomb. Anna Bulbrook, switching her time between her viola and keyboard, or tambourine playing on the bassist’s shoulders. Guitarist Steven Chen played some bad ass leads that I almost wished turned into full metal solo’s, and early in the set, three members up on the drum risers with their own sticks beating out a tribal rhythm. Mikel Jollett was all over the place, crowd surfing the audience and trying to balance on the barrier that separates the bar from the floor at Showbox Market. While he was trying to sing and keep his balance on the barrier, I noticed some comely young lady slipping a piece of paper in his pocket (You’ve got to love Rock ‘N’ Roll!) The band was tight and concise, but my only complaint here is that it came off seeming a bit too rehearsed. I just went away with the idea that’s how they do that set every night, but I could be wrong.

The audience did not throw any devil horns in the air; they mostly just stood there, bopped their heads and watched the performance through their iPhones and other digital devices. I’ve noticed this phenomenon quite a bit recently, but none so much as at this show. An entirely different subject, alas, but one that never fails to make me angry. What happened to lighters people?

All in all Airborne Toxic Event are a top notch band of great musicians that have managed to carve out their own niche, make their own genre, and garner mainstream attention at the same time. That’s a rare thing to achieve without some sort of creative compromise. It was also a very rare set of circumstances that birthed this group, and I find that narrative very satisfying.