My only exposure to Doug Stanhope prior to last Thursday was his guest spot on an early episode of Louie. In it, Stanhope plays “Eddie,” a jaded, never-was comic at the end of his rope, convincing Louis to go out for one more night of debauchery and open mic crashing, before confessing that he’s going to kill himself soon thereafter. It’s a chilling performance, one perfectly suited to Louie’s world of dramedy, and it makes you wonder where the comedian ends and the character begins. 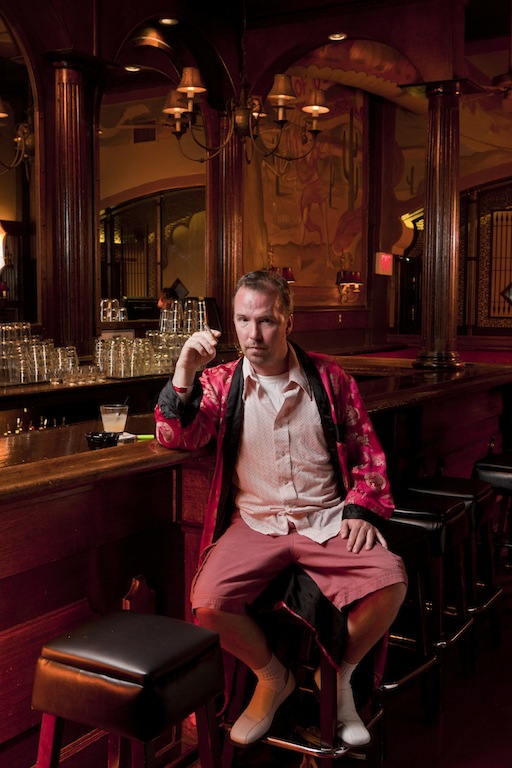 Stanhope the comedian began his set at the Neptune with a stiff drink in hand and an oversized orange suit he claimed to have purchased second hand on University Ave earlier that day. The suit made Stanhope look like the 5th King of Comedy, which he referenced himself before adding that it was just more “black art white people were stealing.”

The surly, down-and-dirty comedy of “Eddie” from Louie was there, but the drama and despair were of course largely absent. Stanhope seemed more like the MC of a party. The crowd yelled out various bits for him to do, like requests at a rock concert – not negative by any stretch, but still anathema to most comedians. More than any comedian I’ve seen, though, Stanhope either openly welcomed it or brushed it off with a snicker. I got the impression that this was a regular occurrence at Stanhope’s shows – the bar comedian and the bar regulars in sync.

Stanhope’s routine more resembled a conversation than a series of jokes, him exchanging tall tales with friends. The humor wasn’t found in punch lines or clever twists, but in Stanhope getting into a rolling boil, a story snowballing via more and more layers of filth, degeneration, and depravity until the crowd was eventually bowled over by it. He riffed on lackluster hotel pornography (and complaints to management about it), almost getting arrested for Twitter harassment in the U.K., his mother’s greed over morphine pills during her assisted suicide (no, really), the failure of the Occupy Wall Street movement to accomplish anything but stink up a park, and closed with a story that began with a simple declaration of “I like watching football” and somehow slowly morphed into a vivid description of a fantasy about raping a football player.

Yes, Stanhope’s comedy can provide a “shock,” but it’s stupid and dismissive to call him a shock comic. For starters, is anything really shocking in any creative endeavor anymore, let alone comedy? If Stanhope used his no-holds-barred and admittedly over the top comedy (he promised to offend everyone at the beginning of the show) only for dumb lowest common denominator laughs, a case could be made. But if you paid close attention, you could hear the undercurrent of humanity, delivered in a style that he, Louis C.K., and the late Bill Hicks did so well: Let me say and do all the wrong things as a means of pointing you towards the right ones.

If you only skimmed the surface of his bits about his mother’s death and Occupy, then you missed the stories underneath about a person’s right to die with dignity and the correct way to challenge authority and tyranny. One of his best bits was about the phoniness of campaigns that “raise awareness” and “walking for cures,” a direct challenge to people to actually do things that matter anonymously instead off flashy things they think will make them look like good people. “I’ve never heard of walking curing anything,” he added.

Stanhope’s been doing standup for twenty-two years now, but it’s hard to feel yourself age when you’re always on stage (he recently stopped ordering Jäger shots while on stage after it was pointed out to him how old he was). Twenty-two years of experience isn’t a thing that can be learned in comedy, or any profession for that matter, and it leaves a comic with his greatest asset: a singular, well-defined voice. Stanhope knows who he is and so does his audience, which makes even his misses funny. He may seem like the leader of the circus, but he’s actually something far more subversive: a comedian able to sprinkle high idealism throughout aggressive lowbrow material. At his best, he may be able to teach even the rubes to get wise on a few things. And at his worst, you’ll still be doubled over laughing at something you’re sure you shouldn’t be laughing at.