Bumbershoot 2011 was an experiment of sorts. In recent years the festival has tried to balance a mix of superstar headlining acts with engaging, exciting mid-tier talent and up-and-coming local acts. This year, for the first time in a long while, One Reel didn’t bank on superstar power to sell tickets. They tried to flesh the lineup out with quality mid-tier performers and the metric ton of musical talent that resides in the Pacific Northwest. For the most part they succeeded.

Another huge difference this year was the rearranged festival grounds, the new venues and the venues and stages that are no more. They changed the orientation of the entrances and exits. Out was the Broad Street Stage and mainstage at Memorial Stadium. In are the EMP Level 3 Stage and mainstage inside Key Arena. Also returning from hiatus were the Fountain Lawn Stage and indoor stage in the Exhibition Hall. The headlining comedy acts were also moved to the Intiman Theatre.

As is always the case with Bumbershoot there was just too much to see to stay in any one place for too long. Throughout the weekend I caught bits and pieces of sets, only a few full sets and missed many sets I was hoping to see. 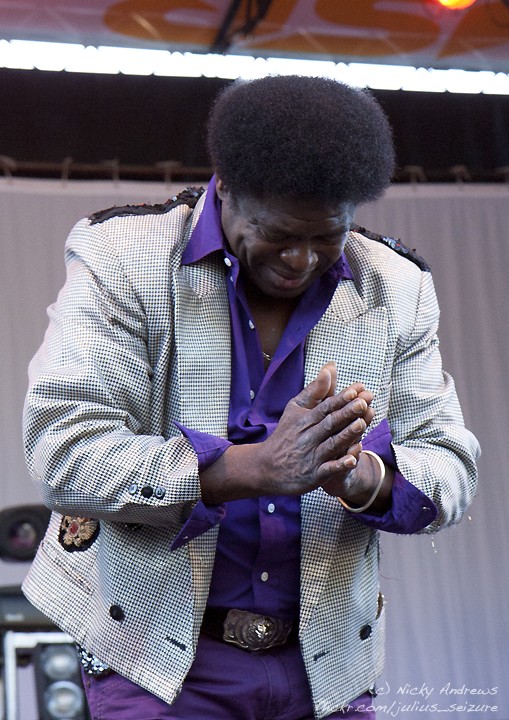 Saturday I arrived a little late and already missed Yuni in Taxco and Brite Futures. The first act I caught was the Presidents of the United States of America in KeyArena. As an introduction, Red from 107.7 The End said “Isn’t this one of the only times you’re bummed to be inside at Bumbershoot?” She, of course, was referring to the perfect weather outside, sunny, not a cloud in the sky. It took those lunatics in the Presidents about .001 milliseconds to brighten up the darkened KeyArena with their heavily caffeinated pop-punk assault. Chris, Andrew and Jason were feather pluckin’ insane as they tore through a set of favorites including “Kitty,” “Lump,” “Back Porch” and “Volcano.”

One of the best attractions of Bumbershoot every year has to be Flatstock, and this year was no different. Fisher Pavilion serves as a showcase and sales floor for countless talented poster artists.

Another great thing about Bumbershoot is the promise of discovery. This year I happened upon Vetiver. Their lush layers and melodies provide an excellent summer soundtrack. I caught a couple awe-inspiring minutes of Trombone Shorty’s set but left before he covered Nirvana. Caught Vusi Mahlasela, a South African singer/songwriter, on the mainstage. His performance was one of the gems of the weekend. His voice was so strong and emotive it was evident he put his heart and soul into the performance.

After listening to about five songs he performed with the Pariah Dogs, I unfortunately realized how boring I find Ray LaMontagne to be. Technically, he’s great but if you listen to his songs most of them sound the same. The set got to the point where it was boring me, not to tears, but close (sorry Ray). After leaving KeyArena I made my way over to the Starbucks Stage to take in a few minutes of the legendary Mavis Staples’ set. She didn’t disappoint, breaking out many hits from the Staples Singers and her solo career.

Day two started with a mainstage set from the Lonely Forest, quickly skyrocketing in popularity and quite possibly the most famous band ever from Anacortes. They played a great set, covering Tom Petty and the Heartbreakers’ “Listen To Her Heart.” Lead vocalist John Van Deusen also achieved his dream of wearing a Sonics jersey inside KeyArena. Between mainstage sets I ran over to the Starbucks stage to catch part of Massy Ferguson’s set and put to good use the Starbucks’ Insider Lounge passes that my girlfriend signed us up for. Free Starbucks all weekend, totally worth it. Massy was playing some new material and of course old favorites including a killer uptempo version of “Wenatchee Eyes.”

One of the best sets of the weekend belonged to Broken Social Scene. The band, kind of a cross between Arcade Fire and The Flaming Lips, gave it their all. Brendan Canning also sympathized with Seattle’s loss of the Sonics, then randomly blamed Ben Gibbard. Songs such as “Texico Bitches” sounded strong despite the band getting up at 5 AM to fly up from L.A. They ended with a fantastic cover of Modest Mouse’s “The World at Large.”

In my opinion, the best change to this years Bumbershoot was the addition of a food/eating area on the old location of the Fun Forest towards EMP. Any time that the festival seemed cramped I found that if you made it over to this area it offered a ton of seating to relax and enjoy festival food.

Other highlights of my Sunday included watching the white-haired, white-bearded voice and piano of Leon Russell electrify the crowd at the Starbucks stage. At the Fisher Green The Butthole Surfers broke out their psychedelic weirdo music. I experienced the strange sensation of sitting at the International Fountain hearing Butthole Surfers in one ear and the melodic arrangements of Toro y Moi in the other. I closed the night out listening to the slow blues burn of Alison Mosshart and Mr. Kate Moss (Jamie Hince), also known as The Kills. The biggest draw of the weekend had to be the Sunday night mainstage show with Macklemore & Ryan Lewis and rapper Wiz Khalifa. The line was so long I didn’t even bother trying to get in. I heard Shawn Kemp took the stage during Macklemore’s set.

Sunday I started out early standing in line for tickets to Eugene Mirman and Amy Schumer – stand up at its finest. Eugene relied mostly on his visual aids including actual Facebook ads he placed and got away with. Amy Schumer based her set on more vulgar material that I’m sure had the parents in the front row wishing they hadn’t brought their preteen boys. After that it was over to the Starbucks Stage for more free frappucinos and the orchestral harmonies of Grand Hallway. At the mainstage one half of OutKast, Big Boi, performed an energetic set that got the crowd pumping and focused mostly on his solo effort. Of course he threw in “Ms. Jackson” and “The Way You Move” for good measure.

Lemolo played to a packed crowd on the EMP Level 3 stage, no doubt benefiting from performing with The Head and the Heart earlier this year. There was a very long line of festival goers waiting and unable to get in. Eisley played their unique, angsty brand of rock in quite possibly the worst venue of Bumbershoot, The Exhibition Hall, a large acoustically horrible room where line of sight is impeded by multiple large columns. Eisley made the best of it, playing their hearts out on “Marvelous Things” and many others. 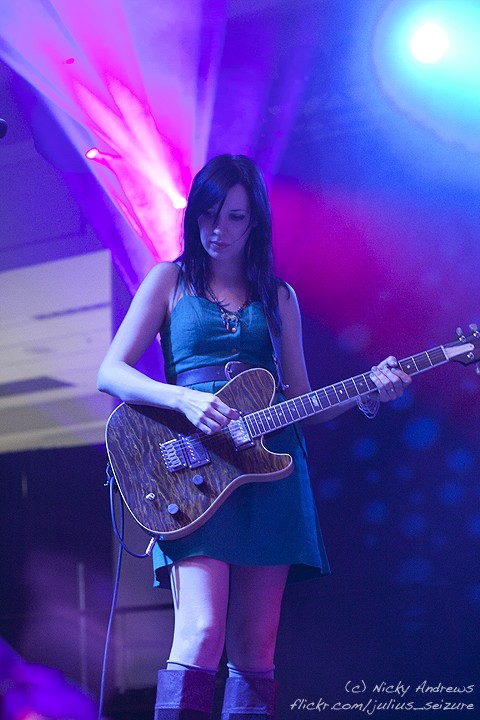 One of the absolute highlights of the weekend was Charles Bradley on the Fisher Green stage. This R&B/Soul/Funk revivalist put literally everything he had into his performance, letting out otherworldly screams and preaching the good word of soul to anyone that listened. I’m pretty sure everyone in the Seattle Center and maybe everyone on Lower Queen Anne heard Charles Bradley. Definitely one of the most passionate and soulful performers I’ve ever heard.

The great dilemma of Bumbershoot came with the 7 o’clock hour on Monday. Whom to see? Vendetta Red, Urge Overkill, Ravenna Woods or Fitz and the Tantrums? As much as I would have loved to see any of these acts I went with Fitz and the Tantrums and wasn’t disappointed. They entertained and got the crowd moving to their groove, throwing in covers of “Steady as She Goes” and “Sweet Dreams (Are Made of This)” along the way. The real crowd-pleaser was “Moneygrabber,” their hit song that has invaded radio stations everywhere and embedded itself into countless television commercials.

Fitz and the Tantrums were the opening act for Hall and Oates, an act a few decades past their heyday but still sounding great in 2011. They brought a six-member backing band in tow, including a rocking saxophonist that brought new life and energy to many of the songs. Daryl Hall’s voice still sounds great and even though John Oates no longer has his signature mustache, his signature sound remains. They ran through a 90-minute set of all the expected hits. They opened with an energetic “Maneater” and played everything from their ’70s and ’80s prime including, “Sara Smile” and “Adult Education.” The first encore found Daryl Hall breaking into an off-tempo “Rich Girl” and the audience sang and danced along to “You Make My Dreams.” They closed out the set and Bumbershoot with “Private Eyes” and “Kiss on My List.”

Yet another Bumbershoot, three fun-filled, packed days under the sun, had drawn to a close. The experiment with no big headliners worked well, but I really would like to see the big headliners back next year. Part of the fun is seeing the big stars alongside the up-and-comers. Also the lack of world music this year was particularly noticeable. I’m sure I’ll be back next year as Bumbershoot always provides a great last hurrah to summer, a place to enjoy sights and sounds, music and arts and, if you’re lucky, free Starbucks!