Fans attend concerts because they are searching for that transcendent musical moment. They are searching for that deep musical connection that only a live performance can provide. This surreal, elusive musical moment doesn’t happen often; it doesn’t happen at every show and it most definitely doesn’t happen with just any artist. By my count there were at least two such moments at Benaroya Hall as one Mr. Eddie Vedder kicked off his two night Seattle stand. While over the years we have come to expect great things from Eddie, the opening act started the night off right by blowing everyone away with just his voice and acoustic guitar.

Academy Award-winning singer-songwriter Glen Hansard, star of the movie Once, demanded attention from the audience with his strong, emotional vocals and masterful guitar work. The audience was riveted from the beginning and listened in awe. Hansard comes across as a harder-edged Cat Stevens or Van Morrison. If the audience didn’t hear the similarity, Hansard drove the connection home with a surreal cover of “Astral Weeks,” the first of the night’s transcendent moments. At a point towards the end of the song Hansard was strumming his guitar so fast everything became a blur. The audience couldn’t believe what they were seeing and hearing. The crowd erupted in a standing ovation. Hansard’s set was short, powerful and to the point. 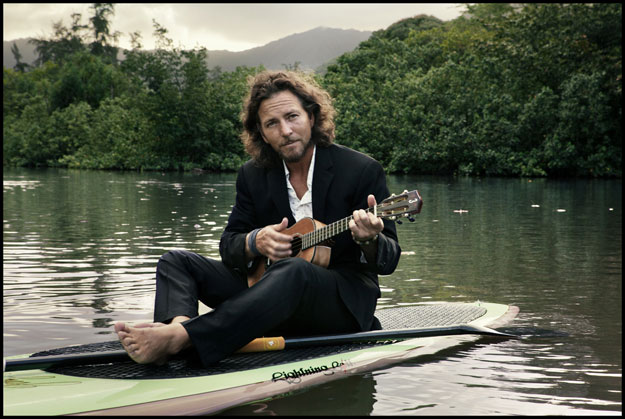 Eddie Vedder took the stage to the customary hometown standing ovation welcome and was at the top of his game. He stated how glad he was to end the tour at Benaroya. The West Seattle native was very appreciative of the reception and said that if it was any other town he might consider moving there. This tour was in support of his recently released album Ukulele Songs, comprised entirely of songs played on the four-string Hawaiian mini guitar. He started out slow with a cover of Daniel Johnston’s “Walking the Cow” then launched into a fast-paced ukulele version of Pearl Jam’s “Can’t Keep”. While many songs were played on the ukulele he also used banjo and a variety of acoustic and electric guitars. The set was full of songs from the new album, the Into the Wild soundtrack, versions of Pearl Jam songs and phenomenal covers.

Vedder touched on his influences with covers of the Who (“Blue, Red and Grey”), Springsteen (“Dead Man Walking”), James Taylor (“Millworker”) and X (“Fourth of July”). He stated how much of an influence the Harold and Maude soundtrack was for Into the Wild before performing Cat Stevens’ “If You Want to Sing Out, Sing Out” on banjo. He followed this up with a spirited sing-along of the Beatles’ “You’ve Got to Hide Your Love Away”.

Eddie’s sense of humor made multiple appearances throughout the set. The lights in Benaroya Hall were very dark except for two stage lights trained on Eddie, who was annoyed by audience members taking photos with flash cameras. To solve this he encouraged the audience to get it all out at once and just take the pictures and be done with it. As Benaroya was flooded with flashes Vedder proceeded to pose on the stage. All of the sudden, turning, smiling he gave the crowd one, then thirty seconds later, two middle finger salutes! I guarantee there’s about 500 photos documenting this on Facebook as I write.

Later in the set, seemingly completely unrelated to anything, Vedder mentioned that it was a horrible week for male genitalia. He was referencing an incident that had to do with a divorce, drugged food, a knife (!) and a garbage disposal (!!!). This led him to inquire about insuring his . . . yeah. He asked his crew “Can we insure this? Can somebody get on it?” The pun provided a perfect transition into the song “Rise”.

Eddie brought out string players, including April Cameron, Matt’s wife, for a few songs. “Just ’cause we’re trying to class up the joint doesn’t mean we’re going soft,” said Vedder as they launched into a fast and furious version of “Lukin”. They stayed around for a couple more songs playing on “Just Breathe” and “The End”.

Eddie then brought Glen Hansard back out to play and sing on a few songs. Glen and Eddie performed Hansard’s Oscar winning song, “Falling Slowly” as a duet. The best performance of a Pearl Jam song all night was Vedder’s high octane, unplugged version of “Porch”. The second transcendent moment of the night came during their performance of “Hard Sun”. An ocean sunset backdrop was unveiled and fog machines turned the stage into a cloud. Part way through the song Vedder got everyone in the audience to stand and clap along. Looking up and around Benaroya Hall at literally every audience member in every tier standing and clapping along in unison while Eddie played and sang atop a cloud at sunset made many in the crowd realize they were part of a once in a lifetime experience. He fittingly closed the show with the last song from his new album, a nice dreamy lullaby version of “Dream a Little Dream of Me”.

When it comes to Eddie Vedder and this show at Benaroya Hall I could go on forever. To sum it up succinctly, all I can do is stand in awe and all I can say is, wow. Perfection . . . even with the broken uke string.