Eisley, from Tyler, Texas is in Seattle tomorrow, Thursday May 19th for a show at Neumos. The quintet is made up of 4 siblings, Weston DuPree, Sherri DuPree, Stacy DuPree and Chauntelle DuPree plus their cousin, Garron DuPree. Rather than going for an obvious band name of the DuPrees, they chose Mos Eisley, after a spaceport in Star Wars. They dropped Mos to avoid any legal attack by George Lucas, and for the last 12 years the band has created 3 LPs and 7 EPs. Still a young band, the youngest member, Stacy DuPree is only 22, they returned after a 4 year hiatus with 2011’s The Valley – an album that definitely shows their confidence and emotional strength. Listen to the title track, “The Valley,” “Ambulance,” “Please” and “Mr. Moon” in particular for sure evidence of this. Yesterday I talked with keyboardist/singer/songwriter Stacy DuPree about Chuck E. Cheese’s – and other topics – ahead of the show.

What’s your hometown Tyler, Texas like? Do you still live there?

Stacy DuPree: Yeah, we live there. It’s about 100,000 people and it’s very quaint. It’s a little city – it’s pretty, it’s green there, it’s lush . . . it pretty much has everything you need. I don’t know if I’ll live there the rest of my life. I’ll probably move eventually but I grew up there. It’s great when you come back from tour to just be able to chill.

Tyler is known as the Rose City, right?

SD: There’s a really pretty rose garden there. You can get roses for really cheap, like on the side of the road you can get a dozen roses for 2 dollars. I always get to buy people roses, and my husband buys me roses. They’re so cheap – He has no excuse not to buy them.

What’s your favorite color of roses?

SD: Lately I’ve been liking these peachy pink ones – a blush color. They’re kind of small and in the next few days they open up, huge.

Your mom and dad opened Brewtones in Tyler – does it still exist?

SD: It does. It’s very rare we do shows but we do play there. Sometimes we play there at the beginning of a tour just to have a practice run, test out the set list and the new songs. My parents started it back in ’98. We started playing there at a really early age. I think we played our first show there when I was ten.

Do you remember getting up in front of people and singing for the first time as a child?

SD: Yeah. It’s funny – we have video of it. We would mess around with songs at our house, and when Brewtones opened up we’d house bands for the night. Our parents always asked us to sing for the bands, or the bands would ask. We were so young and they were curious. We were so shy, completely scared out of our minds. We were home schooled and I was an extremely shy kid. We loved music and our parents helped us in that regard, getting us to play for people. It warmed me up. We have video of our first show and it’s hilarious. I was ten years old, white blond hair down to my butt, star stickers on my cheeks . . . I was so serious.

That is so cute. You were kind of glam early on with stars on my face.

SD: Crimped hair too. It was in the ‘90s. The cool thing in the ‘90s was for people to jump, just hop in place. It was very, very cool. My sister Chauntelle [DuPree, guitars], after one song, feeling like the energy wasn’t high enough for her asked, “Will you guys jump for us?” I think people did out of pity. 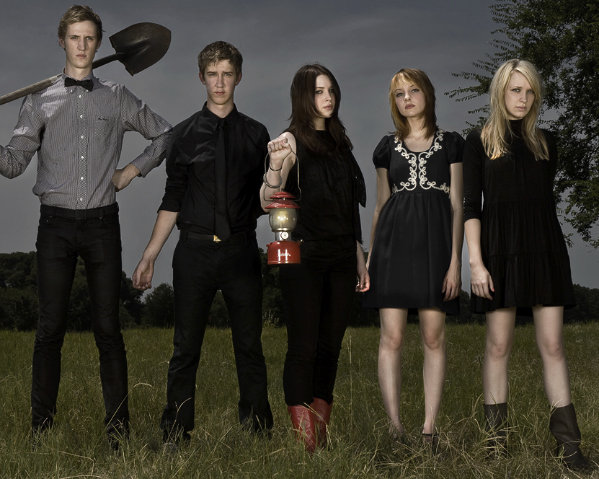 SD:I don’t hold back. I think we used to – not purposefully – we were just young and didn’t have as much life experience to draw from so we made up these little fairy tales, or things that inspired us whether it was nature or stories we made up. Whatever felt meaningful. I don’t think I have anything too personal that I feel vulnerable about. The latest record is definitely highly personal in a lot of ways – the things that our family went through, my sisters especially. We all went through some bad breakups. It was just natural to write about those things. A very cathartic experience.

What made you decide to call this album The Valley?

SD: “The Valley” is the first track on the record, and it’s a song I wrote. It’s a very adventurous song. It’s very driving. It’s me trying to discover myself, growing up, and finding out what’s real and what’s in my childhood fantasy. The in- between of entering real life and adulthood and saying goodbye to these fairy tales I thought were real in life. Going through a dark time. Trying to be brave and hold your head up.

You performed in Seattle with Seattle Symphony. Will this be available as a recording?

SD: We did that about two years ago and it was a really cool experience. It was for charity and we got to perform with a full orchestra. We had a children’s choir on one of our songs. As far as I know they weren’t going to release it but I’ve been hearing more talk about it.

I saw on your twitter a tweet about going to Chuck E. Cheese’s. As far as I know there isn’t one around Seattle and I used to love them. How did you end up there?

SD: On a whim, my husband was like, “Just get in the car and I’m gonna take you somewhere and trust me, you’re gonna love it.” And I was like, oh God. We pulled into Chuck E. Cheese’s and I just lost it. We ended up having so much fun that day. It was one of the last days before I had to leave for tour. It was a funny day.

It’s the weirdest place. They had a singing mouse.

SD: They had a singing Justin Bieber! I was going crazy.

Do you think people don’t realize just how long Eisley has been a band?

How have your fans changed? Do you think they’ve grown with you?

SD: We meet fans all the time, who are like, “I listened to you in high school.” For a lot of them the old songs are maybe bittersweet in that regard. I think good music in life is the kind that can take you back to a place in your life. I think those things help us remember. That’s one of the big things about music, attaching us to memories in our lives.

How women in music cope is always interesting to me. Do the three of you [sisters Chauntelle and Sherri DuPree-Bemis (guitars, vocals)] support each other?

SD: Yeah. We do definitely draw strength from each other while performing. It’s the coolest thing ever, to perform with my sisters. It’s just fun to play rock with them, and sing, and rock out.

You had about a 4 year break between The Valley and Combinations. I read one of you became an electrician?

SD: That was my brother [Weston DuPree, drums]. It’s actually his birthday today – he’s 25. We had a lot of down time from the period of when we made the record to when we released it. It was like a year we were sitting on the record, trying to get it back from Warner Bros after they dropped us. He wanted to get married – he’d been dating his girlfriend since he was fourteen. He learned how to be an electrician. It’s really kept our band alive.

You signed to Equal Vision Records – was that last year?

SD: Around the holidays. We got dropped and we were trying to find a record label to put the record out. We reached out to bunch of people, and it felt like they wanted it the most. They really believed in it. They’ve proved that to be true the way they’ve been pushing the record, we’re finally getting radio. Cool things.

You recorded The Valley in Tyler. Did that make for a more relaxed atmosphere?

SD: Definitely. We made the record in our hometown. We have some friends who run a studio. We weren’t surrounded with any A&R. I think at that point they (Warner Bros.) were just letting us do our own thing. They had given up on us, didn’t care or whatever so we were on our own. We kind of self-produced the record and made the record we wanted to make. When we turned it in they said they didn’t really get it. It was a bummer because right after the record our contract was up. Our A&R guy, who was our cheerleader in the record company, believed in us but I don’t think anybody else did, especially the president. We couldn’t get our record back for a year. It happens everyday. Record labels of that caliber will drop you, like flies. The president of Warner Bros. left the company a couple months after we got off the label. What’s so funny is who replaced him is Rob Cavallo, who we worked with back in 2003 on our first record. Great guy. We had a great relationship with him. He’s actually producing my husband’s band, Mutemath (DuPree is married to Mutemath drummer, Darren King). I was up in New Orleans hanging out with him and it’s hilarious, the switch that’s happened now. He [felt like] what happened was terrible. It was freeing to hear him talk about the situation. My husband’s on Warner Bros. so I’m constantly around these folks. They’re good people but it’s awkward.

Do you and Sherri write lyrics and music together?

We used to write a lot together, collaborate, throw ideas back and forth. In the past few years, I think with everything we’ve been going through, not purposely, started writing on our own. We’re not opposed to working together again, but I think we’re exploring our personal side of things. It’s cool to bring them together.

I came across your cover of Stevie Nicks’ “Silver Springs.” It’s wonderful. Are you a fan of hers?

SD: Thank you. I am. I hadn’t grown up listening to her but when we were making our second record,Combinations in Malibu I was driving and “Dreams” came on the radio. I asked my Dad who it was and he said, that’s Fleetwood Mac. I became obsessed at that point. I actually got to interview her for Foam Magazine. She was just lovely, so cool. She was so confident. She’s owned everything she does. She was telling me to not ever let anyone tell me what to do in the business, to demand respect. I recorded the song with Jeremy Larson and my husband. I’m actually going to be doing my own record.

SD: Right now I’ve only got three songs. I’m recording in Springfield (Missouri). Hopefully in June I’ll be going back there.

****Eisley, with the Narrative and Christine DuPree is all ages – get tix here.****